When Yousef Katt (not his real name) discusses the war in Syria, he merely refers to it as al-wada, or "the situation." And for this businessman, it's not a bad situation at all.

In fact, these days, Katt is constantly busy. Even on weekends, you'll find him wearing slacks and a pressed shirt just in case someone calls and asks him to help sell their house. If the house lies in one of Damascus' better neighborhoods, Katt will drive over to look at it. He gives the building a once-over, tells the owner he will think about whether he's interested, and leaves. He can afford to be picky.

These days, there are many who have to sell their houses -- but few who can buy them. Katt is one of these few.

"A top location is and will continue to be a top location," Katt says. He recently took a look at a restaurant in the old city of Damascus near the famous Umayyad mosque. In the record year of 2010, 8.5 million tourists visited this location, and the numbers looked set to increase. And most of these have been cultural tourists with full wallets unlike the beach vacationers on package deals in Tunisia and Egypt. Of course, the ongoing troubles in Syria have kept most tourists away. But, Katt says: "Things will get going like that again in a couple of years."

Katt belongs to Syria's upper class, the top 1 percent of the population. Syria's super-rich entrepreneurs enjoy a symbiotic relationship with the regime of President Bashar Assad -- after all, good relations means good business. People in Damascus say that no big export or import deals can happen without the regime's approval.

Katt has also made millions through trade, hotels and restaurants. Most of his assets are in foreign currencies. A lot of it is invested in Dubai -- something which is now paying off for him.

"Syria is a good place to shop right now," Katt says. Before the crisis, €1 ($1.25) fetched 60 Syrian pounds, but now it gets you 85 Syrian pounds on the black market. In March, Syria's currency reached its lowest value to date, trading at 125 pounds to the euro.

There is a new term in Syria for men like Katt: the tijar al-azma, the traders of the crisis. They do business in three things: real estate, heating gas and diesel. And EU sanctions are actually helping these war profiteers.

In order to increase pressure on the Assad regime, Brussels has imposed sanctions on Syrian oil and gas products, one of the most important sectors in the country's economy. In May, Syrian Oil Minister Sufian Allaw said the sanctions had cost the country $4 billion.

But the country's population is also paying the price for the restrictions. Diesel pumps at gas stations are often blocked off, because the regime prefers to keep the scarce fuel for its tanks. Nor is it always possible to obtain the blue gas bottles that many use to fuel ovens and stovetops. And when they are available, they can cost 34 times as much as they did before the insurgency started.

Syria's poor have already been suffering as a result of the economic crash and price increases for a long time. But now even members of the middle class are having to dig into their savings and offer their houses to the super-rich -- people like Katt.

'Politicians Are All Liars'

Katt is taking an evening stroll through the old city of Damascus. He pops into the Tao Bar, which opened six months back. On the right, there is a small platform for DJs; on the wall, there is a big, golden Buddha. The establishment derives its inspiration from Paris' legendary Buddha Bar, and the prices for sushi and cocktails are similarly high. At night, local guests can quickly run up a €100 bill -- and that in a country where the average monthly income is roughly €200. Since the place isn't really hopping yet, Katt decides to continue on his walk for now.

Katt runs into an old friend from his school days at a restaurant in the old city. Like Katt, he is a Christian and should actually already be in retirement. Owing to his former position as a general in Syria's army, he says he is once again doing "something with domestic security" -- though he refuses to go into greater detail. The former general says that "the situation" will be back under control in less than a month. Once he's gone, Katt says: "Politicians are all liars."

Although Katt doesn't believe "the problem" will be over within a month, he says that could definitely be the case within a year. Unlike many Sunni businessmen, Katt hasn't broken off ties with the Assad regime. He views the insurgents as a plague on the country that has been stirred up by foreign elements, and he believes the regime will "take care of" them. He says that the almost exclusively Sunni neighborhoods, such as the Bab Amr rebel stronghold in Homs, will be "cleaned up" and then resettled with a "mixed" population, meaning people belonging to Syria's minorities. "There will no longer be neighborhoods like the one in Homs," Katt says, claiming he was told as much by government sources.

The EU's sanctions were actually meant to specifically target people like Katt, in other words, businesspeople who are using their assets to support the regime. "One can buy politicians here with money," Katt says. In fact, Brussels even imposed sanctions on individual businesspeople who are financially backing the regime, such as the president's cousin Rami Makhlouf, who is believed to be a billionaire. In comparison, Katt is just a small fish who doesn't show up on Brussels' radar, thanks to the opaque nature of the ties between elements of the business and security worlds in Syria.

Katt is joined by a friend from his university days. The economic crisis cost the friend his job in a hotel. Although he is a Christian, like Katt, the two do not share the same political views. Over the next few hours, Katt works his way through the menu and curses the insurgents, while his friend smokes a water pipe in silence.

Later, when he is alone, the friend says: "There are some people in Syria who have such an unbelievable amount of money that it's obscene." 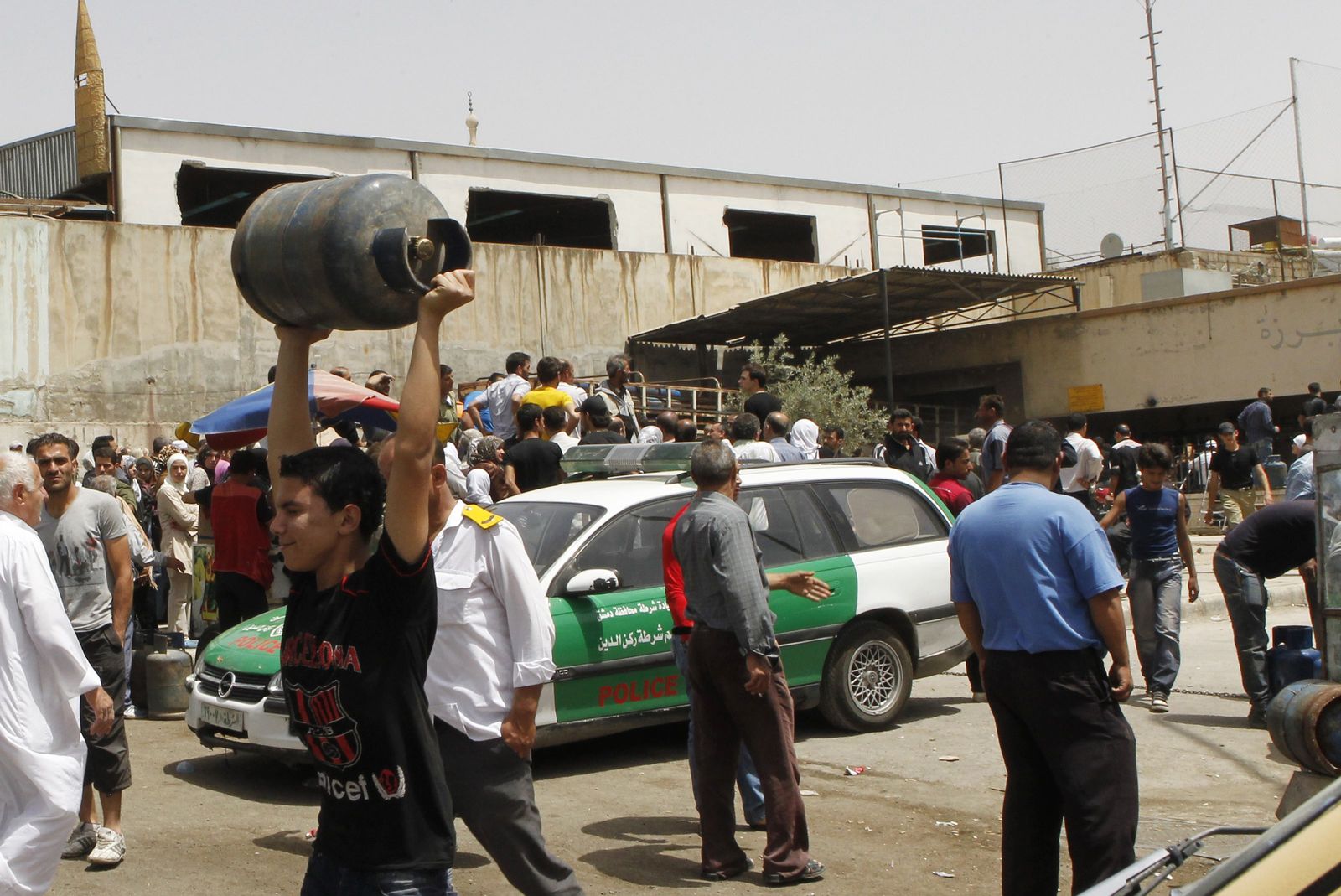