The confidential report that European Union diplomats sent to Brussels following their visit to a refugee camp in Libya didn't mince words. "The conditions ... conform to expectations," the diplomats wrote, "poor sanitation, space and overall hygiene: unfit to host over 1,000 migrants in detention." The report, labeled "EU restricted," went on to note that the living conditions were "squalid" and "the small medical dispensary (was) a miserable sight."

The EU diplomats also documented interviews with refugees in the Tarek al-Sika Detention Center in Tripoli. Many of them had spent months behind bars with some of them having been locked away for over a year. The migrants spoke of abuse experienced during their trip to North Africa, with many having lost their money, mobile phones and passports. In sober bureaucratese, the report describes life in the Libyan camps as hell on earth.

The image provided by the EU emissaries is consistent with the experience of many of those who provide aid to migrants. German diplomats have even gone so far as to describe the conditions in Libyan facilities as being "similar to concentration camps."

None of this has prevented Boris Pistorius, the state interior minister of Lower Saxony, from reviving an old proposal. A member of the center-left Social Democrats (SPD), Pistorius demanded in a recent piece for the German daily Süddeutsche Zeitung that refugees should be sheltered in Libya, though he suggested that the EU or the United Nations should be responsible for running such camps. He argued that doing so was the only way to prevent migrants from making the dangerous journey across the Mediterranean.

It is a controversial proposal, and not only because of the subject matter it addresses. Pistorius' untimely article also weighs on the SPD's campaign, with just over five weeks until the German elections. SPD chancellor candidate Martin Schulz, after all, had been hoping to take advantage of the refugee issue to call into question Chancellor Angela Merkel's competence on the issue. Schulz even traveled to Italy to deliver an important message: Even as Merkel is hiking in northern Italy, I am busy addressing Europe's problems. But thanks to Pistorius, the message is at risk of getting lost. Now, it isn't Merkel who is in the crosshairs of criticism, but the SPD itself.

Pistorius is Schulz's domestic security expert, but his demand for camps in Libya makes it sound as though he is taking a page from the platform of Merkel's conservatives. And it is in direct contradiction to the SPD candidate. "Right now, I believe that reception camps in Libya are unfeasible," Schulz told DER SPIEGEL in response to Pistorius' statement. "The prerequisite for such camps would be acceptable state structures, and such structures are not present in Libya. I believe it makes more sense to talk about stabilizing Libya as a state."

The proposal to stop migrants in Libya and to clarify there whether they have any chance of being granted asylum in Europe is hardly a new one. Over 10 years ago, then federal Interior Minister Otto Schily, likewise of the SPD, proposed the idea of establishing asylum centers in Africa. Current Interior Minister Thomas de Maizière, a member of Merkel's Christian Democratic Union (CDU), has made a similar proposition. Currently, a prominent proponent of the idea is Austria's conservative foreign minister, Sebastian Kurz, a young up-and-comer who has his sights set on the Austrian Chancellery during October elections in the country.

On the surface, the idea has its merits. More than 94,000 migrants and refugees have crossed the Mediterranean to Italy this year -- and at least 2,221 people have lost their lives in the attempt. That is only slightly more than the number who arrived during the same time period last year, but Italy has had enough.

Ninety percent of those who arrive in Italy are economic migrants and have little chance of being granted asylum or recognized as a refugee. Such status is a prerequisite for being distributed to other EU countries. Economic migrants, however, are Italy's responsibility alone, with Rome liable for providing them with food and shelter and with processing their asylum applications.

The Big Business of Refugees

If their fates could be determined before they left Libya, it would provide Italy with significant relief. And the EU would also be spared the thankless and often insoluble task of deporting the migrants back to their homelands.

That, though, isn't likely to happen any time soon. Nor is a refugee deal with Libya of the kind the EU established with Turkey imminent, despite repeated demands from German conservatives for such an agreement. After all, despite its name, Libya's Government of National Accord under Prime Minister Fayez Sarraj has virtually no power in large parts of the country, even though it is propped up by both Italy and the EU.

And that's not the only difficulty. The situation for migrants in Libya is extremely dangerous. "Migrants are big business in Libya," a representative of Doctors without Borders warned in testimony before the European Parliament in April. "Pumping more money into the system is going to make it worse."

The confidential EU report confirms this assessment. Libyans interviewed by the EU diplomats said that some migrants are detained in unofficial camps until they pay ransom. "Migrants were indeed sometimes sold between centers," the report from mid-April noted.

Libya says that the EU naval mission Sophia is primarily to blame for the climbing migrant numbers. The principal task of the EU vessels is that of combatting migrant smugglers, but they also save many of those who are in danger of drowning on the high seas. Doing so, however, unintentionally aids the migrant smugglers' business model, since most of the refugees are picked up just four hours after they set out to sea.

Italy would like to see Libya intercept the refugees in coastal waters and bring them back to land. In early August, the Italian parliament approved the dispatch of warships to the port of Tripoli. Italian Defense Minister Roberta Pinotti said that the vessels were to support Libyan efforts in fighting migrant smugglers in the country's coastal waters "in close cooperation" with Libyan officials.

Italy feels as though the EU has left it in the lurch -- and the country is furious with the French, especially given that President Emmanuel Macron recently demanded the establishment of asylum centers on Libyan territory. Even if the Élysée Palace has since backed away from the proposal, Italian Foreign Minister Angelino Alfano nevertheless continues to blast the "ill-considered babble" from Paris.

Economic interests are likewise at stake in the conflict. Italy's Eni corporation is in competition with the French company Multi Total for the natural gas and oil reserves in Libya. The Italians, like Brussels, are seeking to rely on Sarraj's Government of National Accord. The French, meanwhile, have maintained their access to General Khalifa Haftar, who has control of Libya's most important port for crude oil.

Because the situation in Libya is so convoluted, an idea is currently under discussion that was proposed to the European Commission in mid-May by German Interior Minister de Maizière and his Italian counterpart. Instead of interning the refugees in Libya, which is crippled by civil war, the two ministers believe it would be better to prevent them from arriving in the country in the first place. De Maizière would like to see an EU mission to protect Libya's southern border.

The EU is planning an initial fact-finding mission, which DER SPIEGEL has learned could be sent by the end of summer. The mission will be charged with determining how the civilian border protection mission EUBAM might be able to best assist Libya with securing its southern border. In addition, Brussels has made 46 million euros available for securing Libya's borders.

'We Want to Go Home'

"To put an end to the deaths in the Mediterranean, we must prevent migrants from arriving in Libya in the first place," says David McAllister, a member of the conservative CDU and chair of the Foreign Affairs Committee in the European Parliament.

McAllister says that the EU will initially support the Sarraj government by providing technical assistance such as helicopters and satellite telephones. "As soon as the legal and political circumstances and the security situation in Libya allow for it, the EU will take on an even more active role in Libya and begin making plans for a police mission on Libya's southern border."

At the same time, McAllister has also introduced the idea of migrant registration sites. The Sahel countries of Niger and Chad are more stable than their northern neighbor Libya and McAllister says that the repatriation of those with no chance for asylum in Europe could potentially be arranged more easily in those countries. Thomas Oppermann, floor leader for the SPD in the German parliament, is pursuing a similar idea. He has demanded "a network of safe places along the refugee route in Africa" where refugees could be tended to and advised. "We have to come between the migrant smugglers and the refugees," he says.

None of that helps those who are currently locked away in Libyan internment camps. Many of them now regret having left their homes for the journey to the north, the EU diplomats wrote in their report. "I guess we were confused," a chemistry teacher from Nigeria said when asked why she had left three children at home to embark on the dangerous journey. The report characterized the responses of many others as being: "We want to go home."

Indeed, it seems that an extended stay in Libya is sufficient to extinguish the dream many once had of reaching Europe. 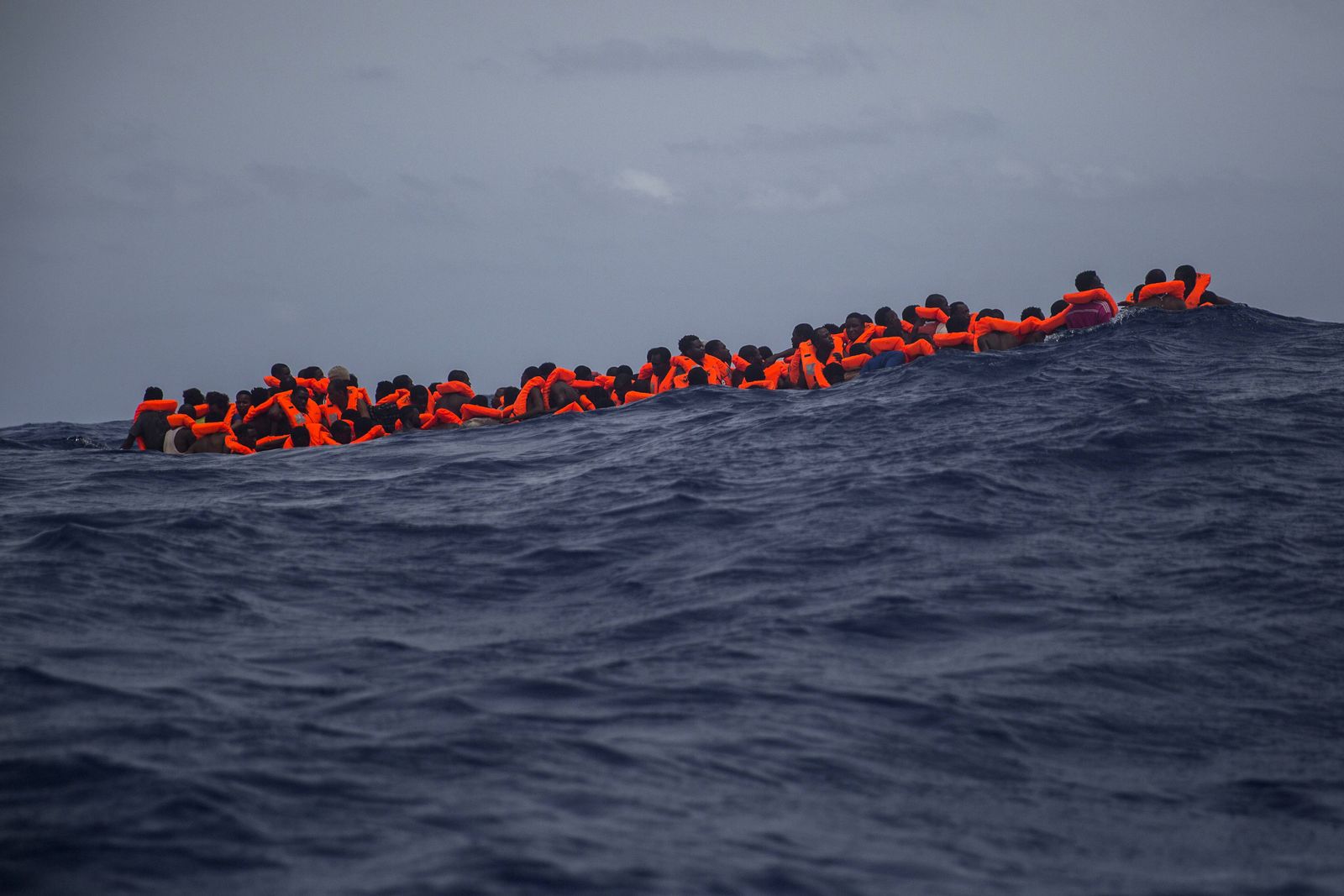 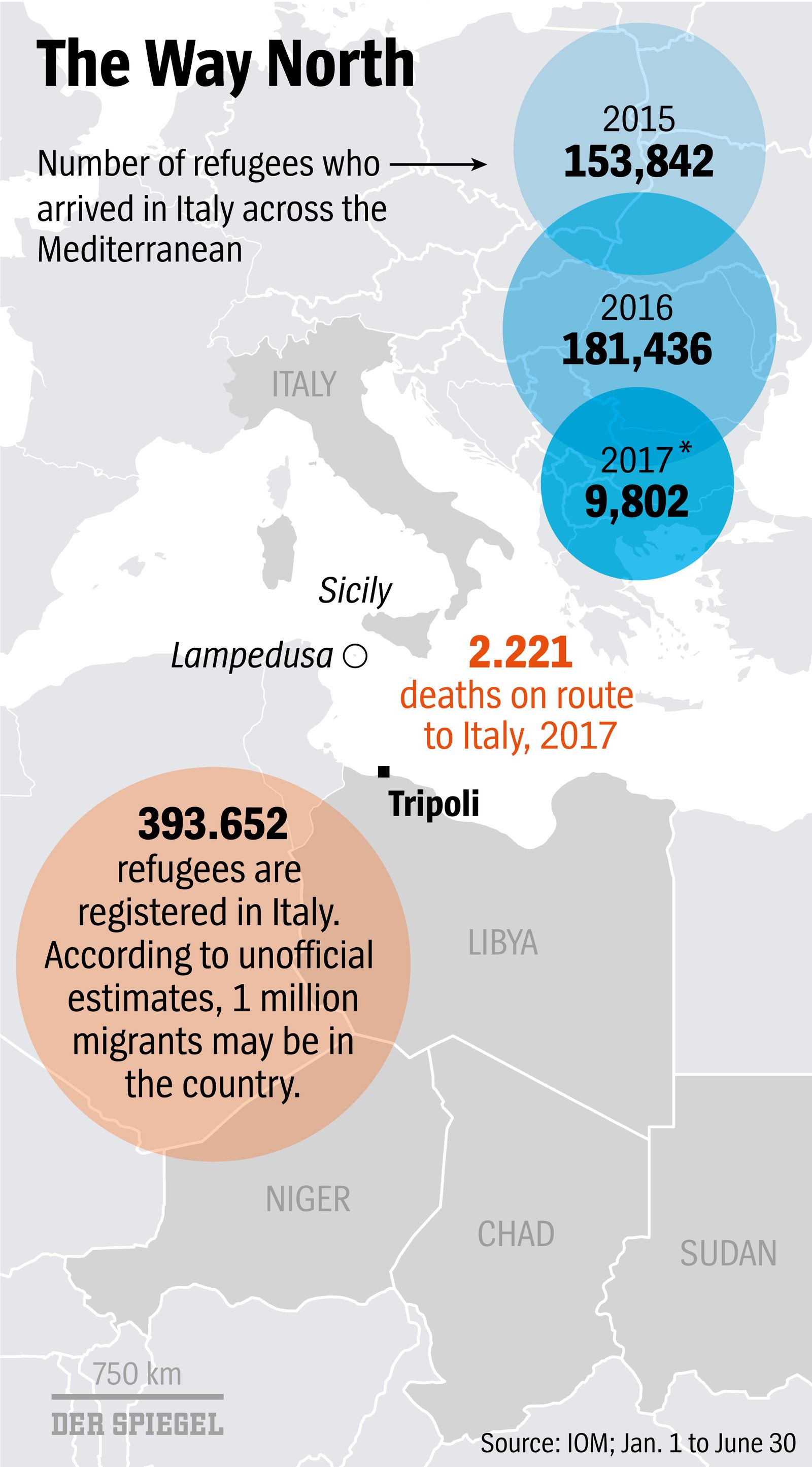