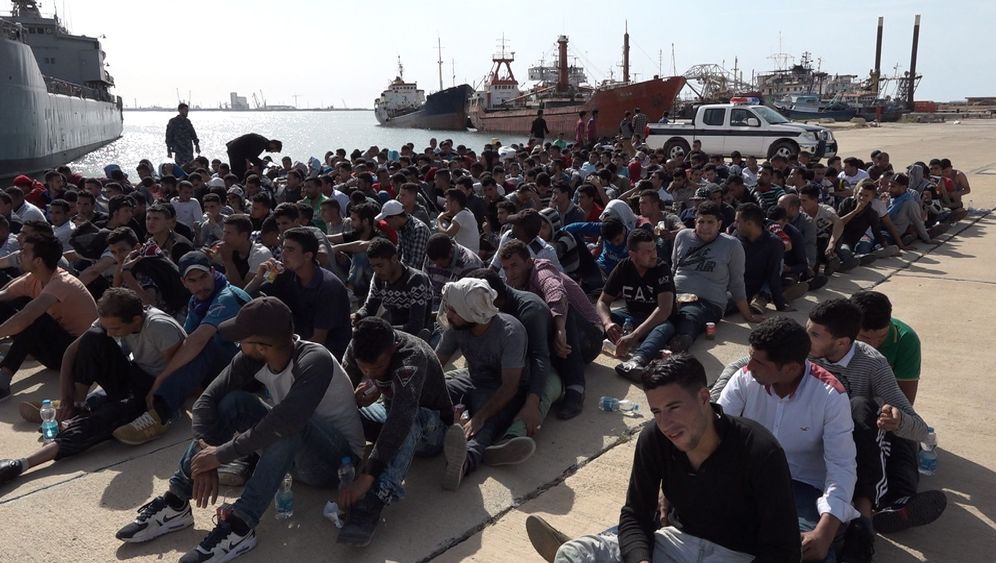 It is a peaceful morning on the Mediterranean. The sky is deep blue and gentle waves roll out to the horizon - a perfect summer's day.

The image, though, is ruined by the gray patrol boat, double-barreled cannon sitting near the bow with heavy machine guns positioned further back. The Kifah (Battle) is the only ship fit for the high seas in the Libyan Coast Guard's possession.

The ship left the Libyan capital of Tripoli early in the morning. Its job is to combat human traffickers and to intercept the floating death traps that the heavily armed gangs use to send migrants northward by the thousands. At the helm is Captain Abujella Abdul-Bari, 49, a stocky man with four golden stripes on the sleeve of his uniform who hails from a family of fishermen and has spent 30 years in the Navy.

At around 7:30 a.m., central command radios him the coordinates where a boat full of refugees is apparently to be found. Abdul-Bari accelerates to 20 knots, yet shortly before the Kifah reaches the spot, where a wooden boat with hundreds of migrants onboard is indeed motoring through the waves, a third ship pulls up on the starboard side, the Sea Watch 2, operated by the Berlin-based aid organization Sea Watch.

The Kifah's engines rev up to top speed as Abdul-Bari curses the Germans: "They are trying to get to the refugee boat before us." The Kifah and the Sea Watch 2 are on a collision course.

This scene, filmed by a SPIEGEL TV team onboard the Kifah, is symptomatic of the vast Mediterranean tragedy - and of the deadly dilemma that European governments have been unable to solve. (A German trailer for the film can be seen here. The full-length, German-language documentary will air on German broadcaster RTL on Sunday, June 26 at 10:30 p.m.) Now in summer when the sea is calm, tens of thousands of migrants will again try to reach the EU via the so-called central Mediterranean route from Libya to Italy.

The EU does not want these people. The refugee problem is politically explosive for the Union, in part because Hungary, Poland and the Czech Republic do not want to take any in, leaving Italy to deal with the problem alone. As a result, the European Commission initiated proceedings against those three countries last week.

But Europe can't hold the refugees back either. While more than 181,000 migrants made it to Italy last year, over 4,500 died on the way. So far this year, many more than 40,000 have already made it with over 1,000 thought to have drowned trying.

The figures are at least 30 percent higher than during the same period in 2016, a function of the land route through the Balkans having been largely blocked. Another factor, critics say, is that the dozen or so rescue boats from Western countries positioned directly off the African coast attract refugees like magnets. Operated by relief organizations, the boats take a majority of the migrants from the refugee vessels and shuttle them to Italy.

There are women, children and babies among them; not so many Syrians, but mainly young men from African countries like Ghana, Nigeria or Senegal. They are fleeing poverty, hopelessness and in some places, hunger.

The result has been a quarrel between relief organizations on the one hand, and politicians and border control agencies on the other, about how to deal with these people. One side wants to do all they can to prevent more from dying. The other wants to deter people from trying: They want the Libyans to intercept the boats and bring them back to the mainland. The African mainland.

To that end, the EU has provided 200 million euros to support the Libyan Coast Guard and Libya has recently requested armed ships and equipment from Brussels. Abujella Abdul-Bari has become Europe's man on Africa's shores: He does the Europeans' dirty work for them.

'A Taxi Service for Refugees'

The experienced sailor doesn't veer off course and the Kifah just misses the bow of the Sea Watch 2 as it reaches the refugees' boat, avoiding a catastrophe by just a few meters.

On the ship's bridge on this day in mid-May, Abdul-Bari complains about the aid workers from Germany and other countries who, in his opinion, do the traffickers' work for them. The migrants used to have to overcome the 160 nautical miles to the Italian island of Lampedusa. Today, they only need to get out of Libya's 12-mile territorial zone and into the 12-mile contiguous zone, where help is waiting. "Everyone who makes it to Italy will call their family and tell them that Sea Watch is only 12 miles away from the coast. You can come." It's a "taxi service for refugees," says Abdul-Bari.

An analysis for the EU border protection agency Frontex echoes these sentiments: The migrants will risk the dangerous crossing because they know they can rely on humanitarian assistance," the report concludes.

The captain is now driving parallel to the refugee vessel and orders them to shut off the engine. The Kifah then pulls up along side it.

The refugee boat appears relatively safe. The engine works and there is only a little water coming in at the propeller shaft, which is relatively normal for a set-up such as this one. The boat was technically not under duress but it could have capsized as it was clearly overloaded.

Migrant smugglers are less and less likely to make the effort to use old fishing boats like this one for the short journey. Instead, they are opting for large inflatable rafts made just for this purpose in China. Chinese companies deliver them for a few hundred euros in containers via the Freeport Malta to places like the Libyan port city of Misurata.

It is a well-established scheme, and the Chinese platform Alibaba.com acts as a sort of Amazon.com for migrant smugglers. On the site, for example, the company Weihai Dafang of Shandong advertises various versions of a product called, "inflatable boats for refugees" - up to nine meters long with enough space for 50-60 people. Last week, the boats were on sale, with a 30-day delivery.

No Legal Way to Stop Deliveries

Migrant smugglers often cram 150 people onto such boats, despite the PVC used in their construction being just about 1 millimeter thick. A single bit of chafing - which often happens where the tubing meets the floor - could mean death for everyone on board. According to an EU report, however, there is no legal way to stop these deliveries from China.

Captain Abdul-Bari commands most of the 497 migrants from the wooden fishing boat to board the Kifah. Among them are 277 Moroccans, but also Bangladeshis, many of whom fly to Libya before being placed on a boat by the migrant smugglers.

Most of the migrants don't understand what has just happened. One man from Bangladesh says he is "confused." The smugglers had told him that the Italians would pick them up, yet he can see the German ship only 150 meters away and the ship he has just boarded is flying the Libyan flag.

Slowly, word spreads that the Kifah is bringing everyone back to Libya. The men are stunned and explain in vain that they paid thousands of dollars to the smugglers for the passage to Italy. Some of the women begin to cry. An officer tries to calm everyone: "The smugglers cheated you," he tells them. Slowly, the Kifah begins the journey back to shore and the wooden boat follows.

Many of the refugees will likely be locked up in decrepit Libyan detention centers, many of which are repulsive facilities, and later deported to their homelands; others will try again.

It is also a disaster for the EU, says Ruben Neugebauer, the spokesman for Sea Watch and an adversary of Abdul-Bari. The Libyan captain's maneuver across the bow of Sea Watch 2 was extremely dangerous, he says - and the staff of the aid agency are not easily frightened. Neugebauer himself is actually a war photographer by trade and when SPIEGEL reaches him by phone, he is near the front in the Iraqi city of Mosul, with bombs audible in the background.

"The EU is trying to seal off the Mediterranean route," says Neugebauer, unfazed by the detonations. They don't want witnesses to "the policy of letting people die." That is why, he goes on, aid organizations are being smeared with the absurd accusations that they are cooperating with smugglers. It's not the ships off the coast that are causing people to flee, Neugebauer says, rather it's the misery at home that drives them to flee.

Furthermore, he says, it is irresponsible to return migrants to Libya. There is a civil war raging, the government in Tripoli has little power, militants and warlords control large sections of the country, a Russian-backed general controls parts of the east and in the middle of all the chaos is Islamic State. In many refugee camps, men are abused and killed and women are raped.

Europe has to combat the problems that cause people to flee in Africa, instead of those who are fleeing, says Neugebauer. And the Libyan government, he says, is not a serious partner for the EU; it is little more than a party to the civil war.

On a lonely beach near Tripoli, a young man in a red shirt is crouching down. He is afraid of people, he says, after everything that has happened. Ahmed, 18, is one of the sons of the Kifah's captain. A few months ago, he says, he was kidnaped by smugglers. They beat and tortured him and shot him in the leg. Then they let him go with a message for his father: The captain should stop interfering in their business.

Abujella Abdul-Bari sits on board and looks at the water. He has six daughters and two sons, and he is aware of the dangers. But he also has his orders: "I will continue," he says.

Yet doing so won't really be of much help to European policymakers. Ruben Neugebauer of Sea Watch notes that the United Nations has warned of an enormous famine in parts of Africa, one that could affect more than 20 million people. "Many of them will end up in our boats," he says. 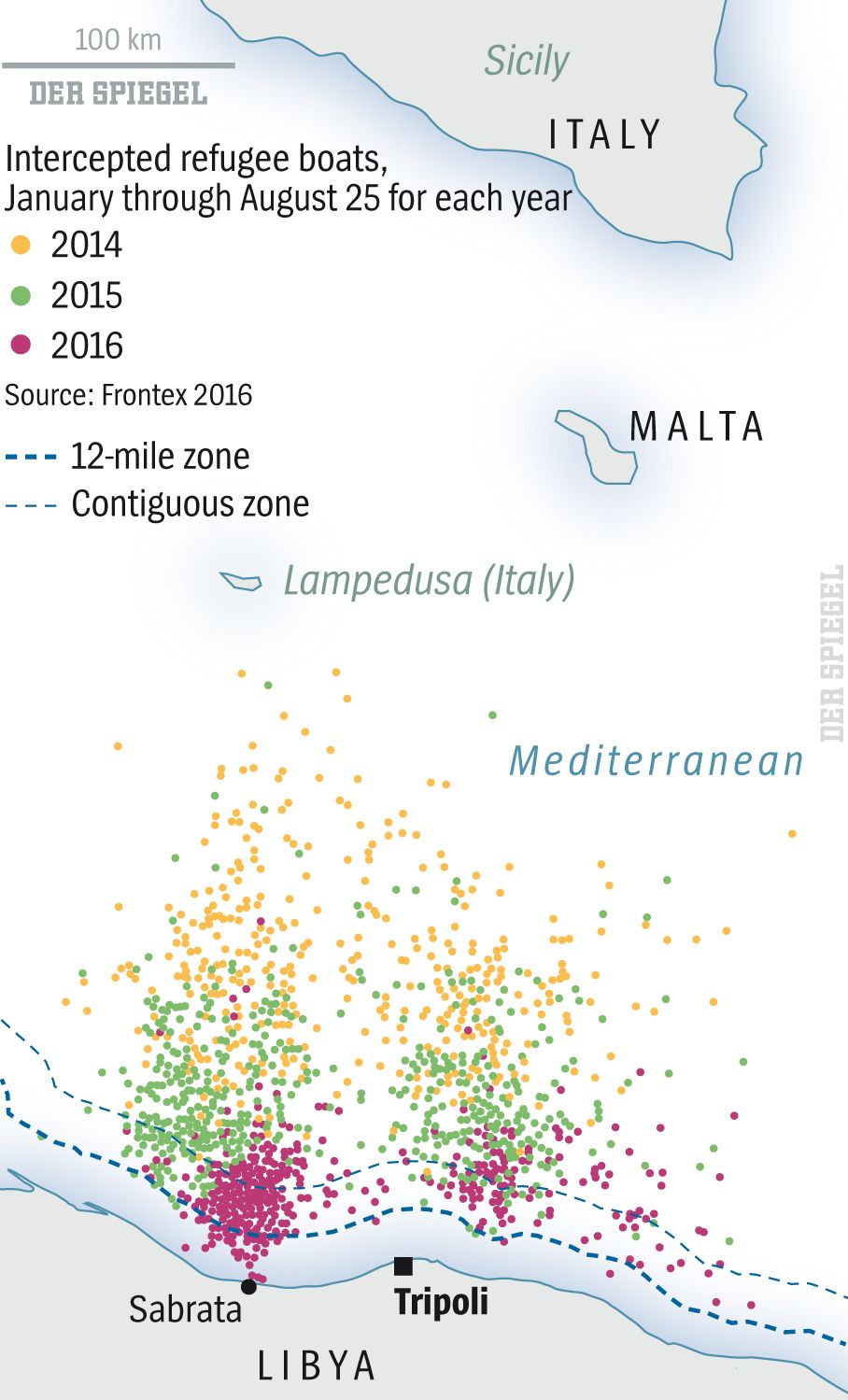