Wilbur Ross is the kind of man who is easy to underestimate. Approaching his 80th birthday in November, he seems slow at times and occasionally nods off during longer meetings. And sometimes, he does so even when his boss is holding an important speech only a feet away, as he did recently in Saudi Arabia.

Ross, though, is U.S. President Donald Trump's commerce secretary, a key cabinet position, and on Tuesday, he was wide-awake. Standing next to an American flag, he read out a speech that was being transmitted to Berlin via video link. Specifically, it was being broadcast into the ballroom of a luxury hotel where German Chancellor Angela Merkel and several hundred guests of the Economic Council, a German business association that is closely linked to Merkel's political party, the Christian Democratic Union (CDU), were listening.

Ross had initially wanted to travel in person to the German capital, but he canceled at the last minute because, he said in the video, "urgent unexpected matters required that I remain in Washington." The commerce secretary then straightened his glasses and monotonously recited what his president expected of the Germans.

He demanded that Germany buy raw materials from the United States instead of from Russia, lower tariffs on automobile imports from the U.S. and ensure that America "obtain a larger share" of the European market. Otherwise, he added, the government in Washington, D.C., would have no alternative but to "engage in self-help."

Ross had been allotted a speaking time of 10 minutes, but when he still hadn't finished after 30 minutes, the event participants had heard enough. They turned down the sound and switched off the video link. The U.S. commerce secretary disappeared from the screen, silenced like a political gadfly. Some in the audience laughed.

One could see the episode as a negligible display of disrespect, unworthy of much attention. The chancellor, after all, has a full schedule and doesn't have time to waste. But one can also see the incident as a covert threat to the Trump administration: If you don't stick to the rules, there are consequences; our patience is not inexhaustible.

Less than a week before the G-20 summit is set to start in Hamburg, the risk is growing that the unpredictable U.S. president could turn the prestigious meeting of world leaders into a fiasco. Environment, refugees, trade: On a long list of issues, Trump and his America-first administration are sabotaging the search for joint positions among the world's industrialized and emerging economies. The discrepancies are "obvious," Merkel said during a speech before German parliament on Tuesday, the discussions "will be difficult."

If Merkel is right, the U.S. - after withdrawing from the Paris climate deal in early June - is now threatening another global agreement. Almost nine years ago, at the height of the financial crisis, the world's 20 largest economies agreed to launch economic stimulus programs and to reach consensus on joint regulations to prevent bank collapses and tax evasion. It was a far cry from the new global government that some had been dreaming of, but that summit did bring about some modest improvements.

Now, though, the Trump administration is reneging on numerous G-20 agreements because it doesn't see the world as a "global community," but as "an arena" in which countries "engage and compete for advantage," as National Security Adviser H.R. McMaster and Trump's economic adviser Gary Cohn wrote in a late May op-ed for the Wall Street Journal. Eat or be eaten: That is Washington's new foreign policy creed, one which doesn't have much in common with Merkel's image of a world with shared rights and regulations.

The chancellor had hoped that the Hamburg summit would be a festival of global cooperation and understanding, but it now looks like it will be sending a different message. Tensions between Russia and the U.S. are again on the rise and the risk of a trans-Atlantic trade war is greater than ever, which would have devastating consequences for the global economy. The West as an entity, it would seem, is disintegrating.

And unease among G-20 planners is growing, in part due to the chaos in Washington. U.S. diplomats shudder to recall the May G-7 summit in the Sicilian town of Taormina, during which Trump exasperated the other delegations by turning over negotiating duties to a constantly rotating team of advisers. Shortly thereafter, he fired his chief negotiator Kenneth Juster, who had been scheduled to play a prominent role in Hamburg as well. His duties will now be executed by a man whose first day of work in the White House was just three weeks ago.

Making matters worse, many of the pledges Trump made in Taormina are no longer valid. At the G-7 summit, the U.S. spoke out against protectionism and unfair trade practices, but during a recent meeting in Paris of the Organization for Economic Cooperation and Development, American negotiators were of a different mind. They ensured that passages to that effect were removed from the closing statement.

But it's not just a question of terminology. The number of trade conflicts between Washington and Brussels has risen significantly in recent weeks. A paper on the desk of German Economics Minister Brigitte Zypries takes stock of the current points of contention. It is a long list.

The U.S., for example, is demanding that Germany finally take measures to reduce its immense trade surplus. Washington is considering the introduction of a so-called "border adjustment tax," which would make numerous German products drastically more expensive in the United States. The Americans also want to impose new sanctions against Iran, which Europe opposes, and are demanding that Europe import more natural gas from the U.S. instead of from Russia.

Of particular note, the list makes it clear that Europe and America are already threatening each other with retaliatory measures and reprisals on several issues.

Beef is a primary example. Since 1989, the import of hormone-treated meat has been banned in the EU for health reasons. It is a conflict that has appeared before the World Trade Organization several times and the U.S. has recently ignited it anew. Washington is demanding that Europe open its market to hormone-treated beef and has said that if Brussels doesn't acquiesce, punitive tariffs could be slapped on over 70 product groups or raise existing tariffs to more than 100 percent.

The list of products that could be affected includes pork, tomatoes, chewing gum and even scooters. Washington is set to decide soon which measures to apply.

And on the eve of the G-20, the dangerous spiral of trade conflict could also be augmented by a dispute over another, often sensitive product: steel. For months, Trump has been execrating the import of cheap steel from China for the damage it does to American producers. Commerce Secretary Ross has been charged with producing a report to clarify whether the cheap imports pose a threat to U.S. national security and was originally supposed to deliver that evaluation in June. Now, however, the German government is concerned that Ross could advise his boss to impose tariffs on the eve of the Hamburg summit or, worse yet, during the meeting.

The problem is that such tariffs wouldn't just hurt Chinese companies, but primarily countries like Canada, South Korea and Japan in addition to the European Union, above all Germany. Last year, Germany was the eighth largest exporter of steel to the U.S., ahead of even China. If Trump were to impose tariffs, it would have negative consequences both for German exports and for trans-Atlantic relations.

Policymakers in Berlin and Brussels have already begun discussing what countermeasures to take should the Trump administration impose steel tariffs. "The EU will answer appropriately if the U.S. introduces trade restraints against German or European steel companies," says German Economics Minister Zypries, adding that there are many tools at Europe's disposal. European Trade Commissioner Cecilia Malmström echoed Zypries, saying: "If it hits us like it could, we will, of course, retaliate."

Brussels' first reaction would be to immediately file a complaint with the WTO. But such procedures often take years to resolve, so European officials are also considering other measures that would have a more immediate impact - such as punitive tariffs on agricultural products like corn, soy or rice. The goal would be to turn American farmers, many of whom voted for Trump, against Washington.

At the same time, the EU is hoping to build new alliances. Negotiations with Japan over a free-trade agreement are making solid progress and Malmström flew to Tokyo on Thursday to clear up some open questions. If her visit is successful, Japanese Prime Minister Shinzo Abe will stop by Brussels next Thursday on his way to Hamburg to sign a political declaration related to the deal. The intention is clear: "We want to send a signal to Washington: We are in favor of open markets," says an EU diplomat who is familiar with the plans.

Currently, the signals seem to indicate trouble ahead. Washington views the European Commission's 2.4-billion-euro fine levied against Google on Tuesday due to the company's abuse of its market dominance as a hostile act. Meanwhile, Merkel's office believes that the Americans aren't just withdrawing from climate and trade consensus, but also from the G-20 process in general. "We are on a dangerous slippery slope," says finance expert and European parliamentarian Markus Ferber. "The USA is pulling back from international bodies. We can see it everywhere."

There is concern, for example, that the U.S. will back out of the joint fight against tax havens and tax dumping, a project where the G-20 had agreed on far-reaching cooperation. The U.S. is also increasingly going it alone when it comes to the regulation of financial markets and banks. Washington still hasn't implemented the Basel III Accord, an agreement on strengthening capital requirements for banks. And it looks as though there is no intention to do so either. In mid-June, the U.S. Treasury Department introduced plans that also call into question some aspects of international capital and liquidity standards.

A key reason for the founding of the G-20 was to improve financial sector regulation so as to avoid a repeat of the global crisis that ensued following the Lehman Brothers collapse. If the Americans were to withdraw from that process, the body would become largely meaningless.

Merkel is still hoping that Trump can get through the Hamburg summit without causing another blow-up. Late this week, she sent her chief negotiator, Lars-Hendrik Röller, to Washington to try to save what could be saved of the summit. But the chancellor is also preparing to confront Trump should he remain intransigent. On Thursday, European G-20 participants met in Berlin to discuss their summit strategy - and agreed to form a common front in opposition to Trump.

Merkel is facing a difficult choice. Either she prioritizes consensus, which carries with it the risk that the summit's closing communiqué will be watered down to the point of meaninglessness. Or she tries to isolate Trump, at the risk of further damaging the already fragile trans-Atlantic relationship.

This week, it looked as though she were leaning toward compromise. After U.S. Trade Secretary Ross was cut off mid-speech during the event in Berlin, it was Merkel's turn to speak - and everyone was anxious to see how the chancellor would react to the attacks from Washington.

Merkel opted for a conciliatory approach. She seized on Ross' proposal to restart negotiations on a trans-Atlantic free-trade deal. What a great idea, she exulted. Such talks, she said, are the best way to solve existing conflicts. 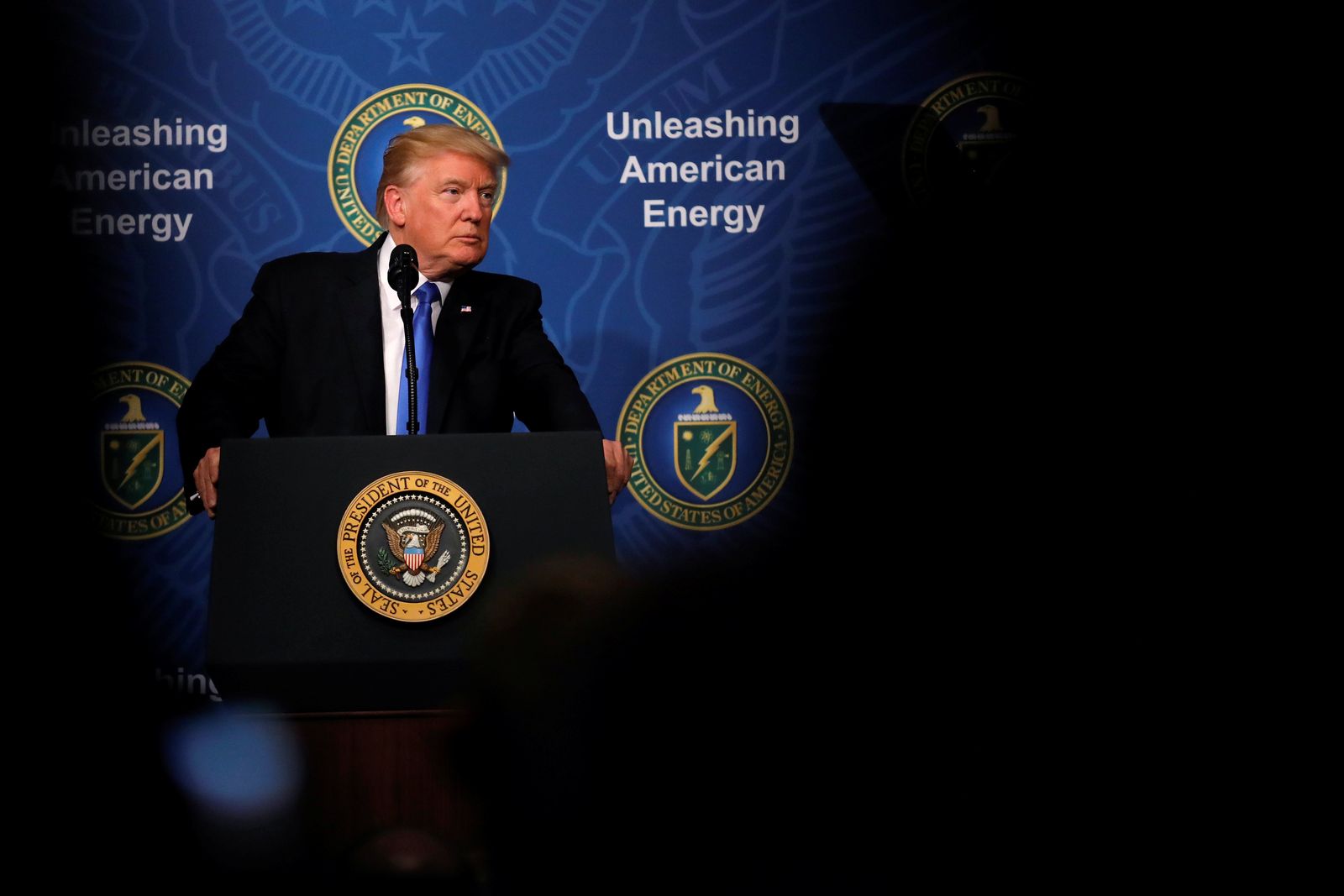