Stanley Fischer, the 73-year-old vice chair of the US Federal Reserve, is familiar with the decline of the world's rich. He spent his childhood and youth in the British protectorate of Rhodesia, in present-day Zambia and Zimbabwe, before going to London in the early 1960s for his university studies. There, he experienced first-hand the unravelling of the British Empire.

History repeats itself, sometimes even within a single person's lifespan. Now an American citizen, Fischer is currently witnessing another major power taking its leave of the world stage. Under the leadership of President Donald Trump, the United States is losing its status as a global hegemonic power, he said recently. America's role as guarantor of global organizations like the International Monetary Fund (IMF) can no longer be taken for granted, Fischer says. "I had a picture of the world economy in which the United States was an anchor," he recently told the Financial Times. "Not a source of volatility."

The U.S. political system could take the world in a very dangerous direction, says the economist, who has held a number of powerful positions in his career. He has been the chief economist of the World Bank, deputy managing director of the International Monetary Fund and governor of the Bank of Israel. His resume makes him part of the caste of "globalists" despised by Trump supporters.

Fischer is seeing things today that he has never experienced in his entire professional career. For instance, he believes the current US government's efforts to loosen regulation of the banking sector, hardly more than 10 years after the financial crisis, are simply "mind-boggling."

Last Wednesday, Fischer took the next logical step and announced his resignation, meaning that the world's most important central bank will lose an undisputed expert. It is quite possible that Trump will replace him with another of his acolytes. Either way, America's reputation in the world of economics and finance is taking another hit.

Fighting to Stay in the Top League

For decades, the United States was something of a guarantor of global economic stability. It helped Western Europe emerge from the rubble of World War II with a massive redevelopment program, the Marshall Plan. Whenever there was a financial crisis somewhere in the world, the U.S. Treasury Department and the IMF joined forces to orchestrate supporting measures. When the worst world economic crisis in 80 years erupted in 2008, the Americans led the globally coordinated rescue effort.

Little is left of that dominant position. The United States, a former superstar, is now fighting to stay in the top league. The economic policy coming out of Donald Trump's Washington is characterized by timidity and despondency, sometimes erupting into boastful nationalism. The former economic superpower has embarked on a self-prescribed retreat. Once the home of the Washington Consensus, a policy that emphasized international cooperation, competition and market forces, the U.S. capital is now beset by economic navel gazing.

Everything that formed the basis of the West's economic triumph in the last few decades has been discredited. Trade agreements are being called into question, while traditional partner countries are being sharply criticized for supposedly causing unemployment. A nation once bursting with self-confidence is now plagued by self-doubt and fear of decline, as it increasingly isolates itself.

Trump takes every opportunity to complain that the United States has been bamboozled in trade agreements, accusing his predecessors of negotiating bad deals. In Trump's world, it is almost as if the United States were a victim and not an enabler of globalization.

Inferiority complexes, fears of decline, incompetence: All of it is having an effect on America's status in the world. At international meetings like the G-7 and the G-20, Americans are being sidelined because of their lack of a coherent position. On important issues, from climate change to trade policy, Washington is increasingly finding itself unanimously opposed by other members.

Just how deep the divide between the EU and the U.S. has become can be seen in an internal position paper from the Economic and Financial Committee of the European Union. The committee consists of top officials from the finance ministries of member states, who coordinate a joint EU position on important economic policy issues.

This time the experts are weighing in on a different document, a July IMF assessment of the condition of American economic policy. That report alone is eye-opening.

The IMF has adjusted its 2017 and 2018 growth forecast for the United States downward, and it has urged the US government to finally address pressing problems such as the aging of society, flagging growth and the unequal distribution of income.

For the Europeans, the criticism coming from IMF experts doesn't go far enough. They view Washington's deliberations on restricting free trade and international cooperation as an attack on economic world peace, but also as a detriment to the United States itself. The EU financial policy experts are critical of the IMF, saying that it should have focused more strongly on the risks of growing protectionism. "Its impact may be much more adverse than currently acknowledged," they write.

The document reads like a settling of scores with the economic policy of the Trump administration. Item by item, the experts tear apart virtually all the plans of the current US administration. On government spending, for example, the EU committee argues that because "public sector debt is already on an unsustainable path," Trump's extravagant budget planning poses "nearer-term risks for the global economy."

Instead, the paper argues, the U.S. government ought to "adopt measures on both the revenue and expenditure side in order to ensure longer-term sustainability." This is a barely concealed call for the Trump administration to cut spending and raise taxes. The document continues: "We find that the administration's proposed reorientation of expenditure towards defence is contrary to wider policy goals concerning inequality and boosting potential growth."

On investments: The Europeans are concerned that international investors have been increasingly avoiding the United States recently. "The decline of the net international investment position, albeit also reflecting the strong performance of the U.S. economy and valuation effects, is a potential vulnerability," the EU paper reads.

On taxes: The planned tax reform, which would primarily reduce the tax burden for upper income classes, "is likely to aggravate rather than address the widely discussed challenges to U.S. economic outlook, such as an increasingly polarised income distribution, rising poverty and falling labor force participation."

On health insurance: The goal of eliminating the Affordable Care Act, which is frequently referred to as Obamacare, is also viewed critically. "It deserves to be recalled that the U.S. already ranks poorly in health care coverage among other OECD countries and that the proposed reform might lead to a further deterioration."

None of this is minor nit-picking. The document exposes substantial differences of opinion between former partners - and it lays bare Europe's belief that Trump's America is in the process of losing its claim to leadership.

The incompetence in Washington has already claimed one victim: the dollar. As recently as the beginning of the year, foreign currency experts were still anticipating exchange rate parity between the U.S. dollar and the euro. But that has now changed. The euro surpassed the $1.20-mark last week and has been hovering just below that threshold since then.

The dollar is not just performing poorly against the currency of the newly strengthened euro zone. It is also losing value against other battered currencies, like the British pound and the Japanese yen.

The article you are reading originally appeared in German in issue 37/2017 (September 9th, 2017) of DER SPIEGEL.

The dollar's loss against other currencies signifies nothing less than a vote of no confidence against Trump and his team. The political newcomer's grandiose announcements of a new era have been followed by failure after failure. The U.S. president has not managed to get a single one of his major projects off the ground. The promised repeal of Obamacare has already failed twice, the vast tax reform that was announced with such great aplomb hasn't materialized, and the pledged investment offensive is faltering.

This has an unavoidable impact on the country's role in the world economy. Indeed, a tectonic shift in the world currency structure is underway. In the last few decades, the American dollar has always strengthened when a political crisis erupted somewhere in the world, prompting investors to seek refuge in the only remaining superpower. The dollar was seen as the most secure safe-haven currency on the globe.

The U.S. currency was a constant for financial markets, even when the system of largely fixed exchange rates came to an end in the early 1970s. A statement made by former Treasury Secretary John Connally summed up the Americans' self-confidence: "The dollar is our currency, but it's your problem."

That has changed, and Trump's presidency isn't helping. When the conflict with North Korea came to a head recently, the dollar lost a significant amount of its value, with international investors shedding their positions. The once undisputed reserve currency is suffering in two ways. Trump's incompetence is not only undermining America's economic foundations. The isolationist course he is charting is ruining the country's reputation in the world together with that of its currency.

The euro is one of the beneficiaries of the dollar's decline, something Klaus Regling sees reflected in his travel expense reports. As head of the European Stability Mechanism (ESM), the euro bailout fund, he is essentially the euro's primary booster. He has spent years traveling the world to encourage international investors to buy the bonds issued by the ESM. The proceeds are then used to bail out cash-strapped member nations.

Regling spent years explaining the complicated construct of the euro to Asians, South and North Americans, convincing them to invest their money in ESM bonds. Recently, though, he has begun spending more of his time at his desk in the ESM headquarters building in Luxembourg. Business, after all, is doing just fine without him.

"I don't have to do much advertising for the euro anymore," he says with satisfaction. "Investors have recognized that the euro crisis has been overcome and that the euro zone is in good shape again."

The austerity programs in Europe's crisis-ridden countries have worked. Even Greece is back on track and is now able to raise cash in financial markets on its own.

Trump administration chaos is not helping to build confidence in the dollar. On the contrary, Trump and his troops are not just managing the decline but are in fact accelerating it. "The United States has been losing influence on the international stage for some time, as China and other emerging economies gain in importance," says ESM Managing Director Regling. "This is why a multipolar currency system is currently taking shape, one in which the euro plays an important role."

Fischer, for his part, is pessimistic when it comes to the future of the United States and the world economy. The seasoned economist expects the new mood of uncertainty to continue. "We are left with a world that doesn't quite have an anchor country  unless things change in the U.S." 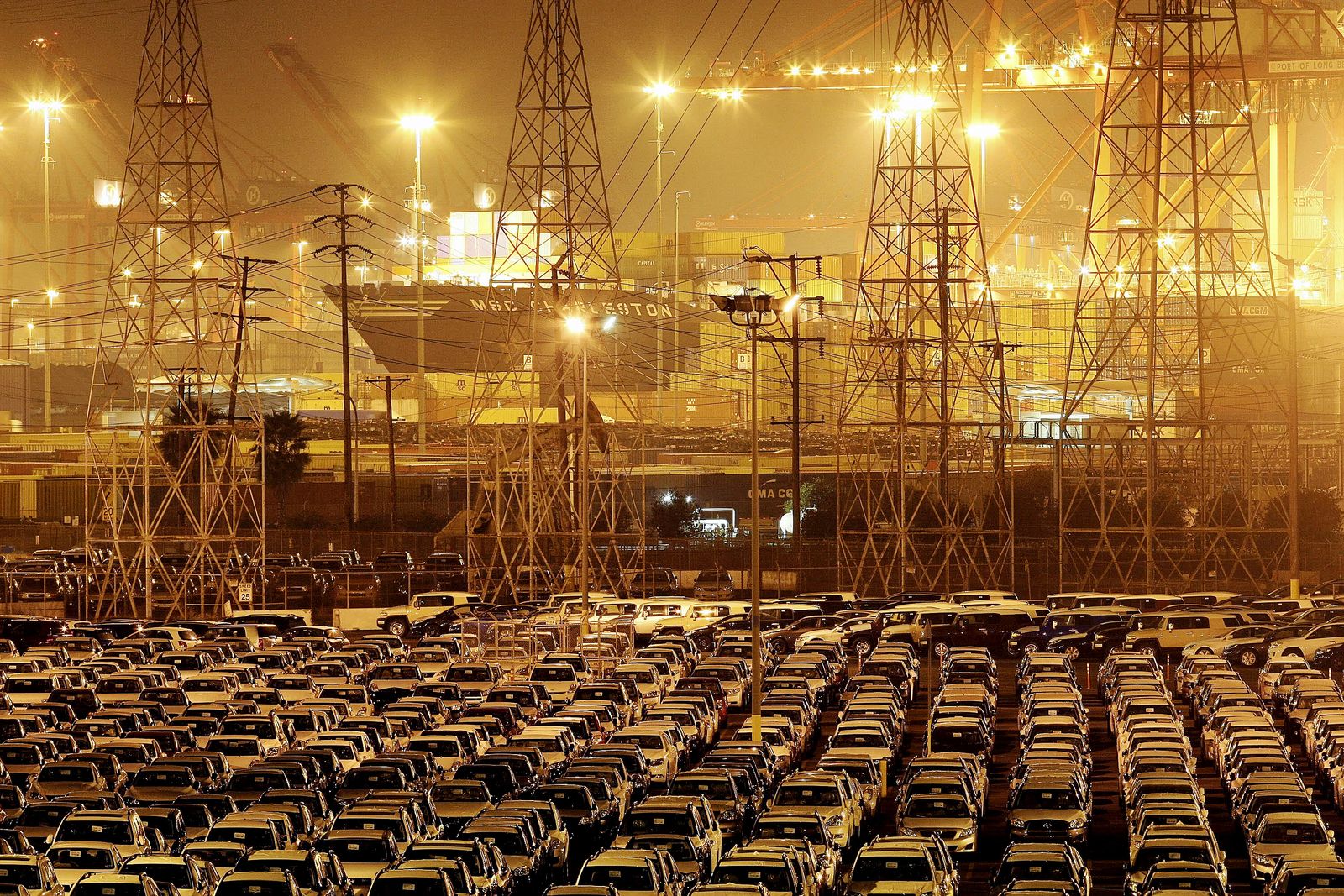 The U.S. economy isn't what it used to be. 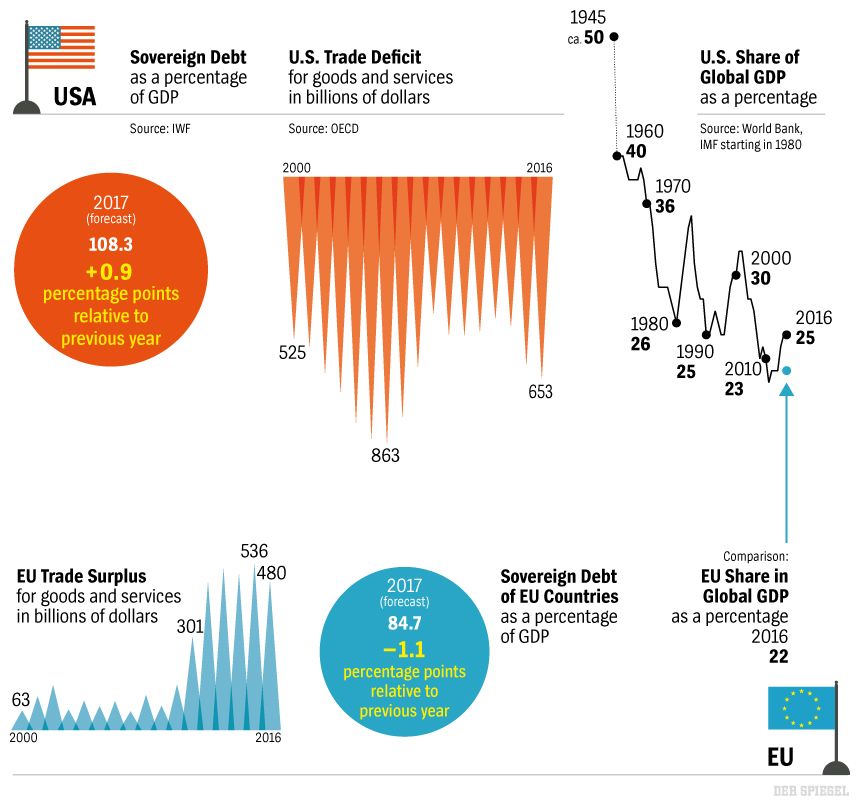 U.S. as compared to the EU 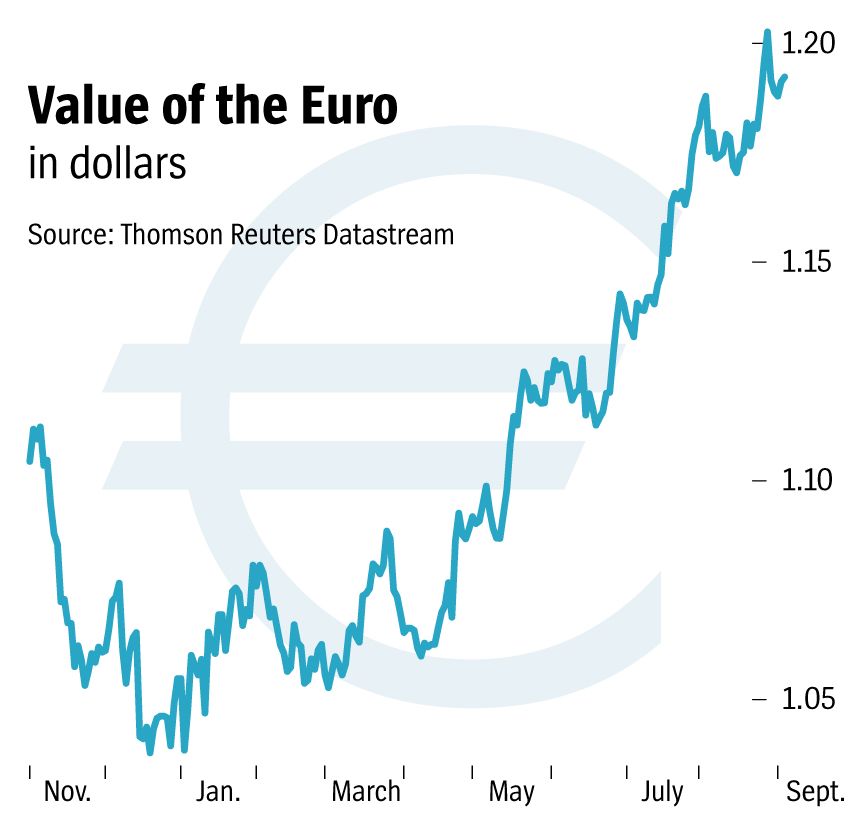