United States President Donald Trump began the week before last on a golf course in Virginia. He was unhappy. On Twitter, he complained about London Mayor Sadiq Khan. The two men have a deep, mutual dislike for one another. "Khan is a disaster," Trump wrote, "will only get worse." In an interview, he complained about Congress, arguing that its members are, "more difficult than frankly many of the foreign leaders. Because they have their own views, you never know exactly, but they have their own views."

Last Tuesday, he launched his 2020 re-election campaign and peppered his speech with attacks on the media ("fake news"), his opponents generally ("angry left-wing mob") and the Democrats overall: "They want to destroy our country as we know it."

Xi Jinping, China's president, visited a conference in Tajikistan the weekend before last, where Asian leaders congratulated him on his 66th birthday. Russian President Vladimir Putin gave him a cake, a vase and a box with Russian ice cream. "That's the most delicious one," Xi said.

On Thursday, Xi headed to North Korea, the first trip there by a Chinese president in 14 years. He said he was traveling to Pyongyang to strengthen the "strategic communication and exchange" with North Korea. If he was annoyed about anything, like the mass protests in Hong Kong, the growing international unease about Beijing's new might or the trade war with the U.S., Xi didn't show it. Unlike Donald Trump, that's almost always the case with him.

These two contrasting personalities will meet this coming weekend at a highly anticipated event: Together with other world leaders, Trump and Xi will be attending the G-20 Summit in Japan. It wasn't until last Tuesday that Trump confirmed in a tweet that there would be an "extended meeting" between him and Xi. Their showdown could overshadow all other summit events.

Because the two leaders represent something that hasn't existed since the end of the Cold War: an increasingly polarized world that is being split into two political and economic spheres. It comes as little surprise that the rivalry between the established and the rising superpower will be so openly displayed at a G-20 meeting for the first time. Its consequences won't only affect the two rivals, but all the participating nations -- countries that make up about 80 percent of the global economic output, two-thirds of global trade and two-thirds of the world's population.

Unlike the U.S.' conflict with the Soviet Union, however, its showdown with China didn't spark from an ideological or military rivalry, but an economic one. Washington believes it is being challenged by Beijing and, under President Trump, is pushing the two biggest national economies to de-couple from one another. It is gradually capping global production and delivery chains connected to China, chains on which almost all other countries depend.

A Problem, Not an Alternative

The Financial Times warned that the American-Chinese rivalry is the "most important geopolitical development of our era." It argued that it "will increasingly force everybody else to take sides or fight hard for neutrality " and that "it risks turning a manageable, albeit vexed, relationship (with China) into all-embracing conflict, for no good reason.

How are the industrialized nations, or the European Union, or Germany, to act in this conflict?

If another president was running the U.S., that question would be easy to answer. Europe shares its fundamental values and economic order with the United States, not with China, an authoritarian country. But Donald Trump, and his aggressive "America First" economic and tariff policies are posing a challenge not only to China, but also to the U.S.'s European allies and states like Canada, Japan and South Korea. All of these countries -- especially trade-dependent Germany -- have interests in China. The decision between Washington and Beijing isn't an alternative -- it's a dilemma.

At the moment, it's the U.S. government -- more than Beijing -- that is pushing the rest of the world to take a clear stance. Take Huawei: For months, Washington has been pressuring countries to stop working with the controversial Chinese network equipment supplier. In May, the administration added the company to an "entity list," a black list banning companies from working with Huawei without government permission. American companies like Google and the semiconductor company Intel have already announced that they would end their professional relationship with Huawei.

Over 140 Chinese companies in the electronics, aerospace, semiconductor and engineering sectors, are already on the list. Washington has deemed them to be threats to national security, and is seeking to make it more difficult for other countries and for companies with U.S. ties to work with them.

The U.S. Senate launched a hearing last Monday about a new package of tariffs that would affect $300 billion dollars worth of products. If it passes, almost all imports from China would be slapped with high duties. Both the Chinese and a majority of the affected U.S. companies are fighting back. Of the 50 companies invited to the hearing, 47 spoke out against the new tariffs. Only two supported them. In a letter to Trump's China negotiator Robert Lighthizer, the American Chamber of Commerce warned that the new package of tariffs would "dramatically expand the harm to American consumers, workers, businesses and the economy."

The approach is reminiscent of Washington's strategy with Iran: You're either with us, or against us. And it is accompanied by undertones that haven't been heard in the U.S. for a long time: Kiron Skinner, the director of policy planning at the State Department, said the rivalry with China was "a fight with a really different civilization."

Beijing, which has been using access to its markets to apply political pressure for years, now sees itself as a victim of its own strategies. In the earlier stages of the Trump-initiated trade war, China acted more defensively. But now it is taking a sharper tack. In late May, Beijing announced its own black list of "unreliable" foreign companies and threatened to halt exports of rare earth metals, crucial raw material for the high-tech industry. State propaganda is preparing the population for tough times ahead: "No one, no force should underestimate and belittle the steel will of the Chinese people and its strength and tenacity to fight a war," Quishi, a Chinese political journal, argued.

At the same time, Beijing is also adapting its policies to the new realities. Chinese leadership is encouraging entrepreneurs, engineers and scientists to gird themselves and strengthen China's own technology sector. "From China's perspective, the trade war is coming too early, because it remains dependent on U.S. components. But it is also seen as confirmation of its own strategy," says Max Zenglein of Berlin's Mercator Institute for China Studies (MERICS). Four years ago, Beijing drew up a master plan called "Made in China 2025" for 10 industrial sectors. Now, it is modifying that plan in a targeted fashion: In classic high-tech sectors like aircraft manufacturing, the party leadership is apparently willing to accept shortcomings, says Zenglein. "Semiconductor chips and artificial intelligence, on the other hand, are being clearly prioritized."

Xi Jinping's most important economic advisor and lead negotiator, Liu He, even sees the growing trade conflict as having a positive effect on China. "The pressure from outside will help us improve our innovation and own developments, so we can reform and open ourselves up faster, and so we can bring our growth to a higher level of quality." The nationalist daily Global Times in Beijing reported that a quote "by the German philosopher Friedrich Nietzsche: 'What doesn't kill us makes us stronger'" was being widely shared on the Chinese internet.

Beijing is feeding this technological ambition through an aggressive foreign policy, strengthening existing alliances and forging new ones, from Russia to Central Asia to the Middle East. Xi's trip to the G-20 Summit will be his fourth in June alone. Generally, he travels out of the country more often than his predecessor -- as well as his rival, Trump.

He also seems to be getting more flexible in his economic and trade policy when it comes to the EU and other countries. Although China has so far reacted to tariffs from the U.S. in tit-for-tat fashion, it has also selectively lowered duties on imports from other countries -- Canadian lobster, for example.

At the Silk Road summit earlier this year, which several European leaders traveled to Beijing to attend, Xi Jinping admitted that some criticism of China was completely understandable. He announced changes and the first are already being felt. For example, BMW is being allowed to take a majority stake in its Chinese joint venture, and German chemicals giant BASF has been given the go-ahead to build a factory without a local partner. Beijing has also agreed to decrease excess capacity in the steel industry and to withdraw a complaint with the World Trade Organization against anti-dumping tariffs levied by the EU.

The Europeans are noticing that China is yielding under pressure -- in part because it wants to avoid a two-front war against Washington and Brussels. At the EU-China summit in April, the Europeans threatened not to sign the final joint statement, a strategy that proved successful. Ultimately, the Chinese agreed to clearer formulations that not only meant better access to the Chinese market, but allowed a political mechanism to monitor progress in establishing "fair competition" and a "level playing field" in trade.

Stuck in the Middle

Many G-20 countries share Trump's reservations about China, but are concerned that a trade war could destroy a world economic order that America played a large role in building. It boils down to scale: China cannot be compared to Iran or Japan, America's nemesis in the 1980s. The U.S. and the Soviet Union once had a trade volume of $2 billion per year. Trade with China is currently $2 billion per day.

If the summit in Osaka doesn't end with an economic cease-fire, it could have dire consequences not only for China and the U.S., but for other countries as well. The Chinese market is more important for Germany's export-oriented industries than it is for the U.S. As early as last summer, over 40 percent of the German companies operating in China and more than half of the German companies operating in the U.S. began feeling the consequences of the tariffs.

Europe is stuck in the middle of the conflict. On one side, EU Trade Commissioner Cecilia Malmström has emphasized her commitment to multilateralism. "We expressly do not share Trump's approach. China is an economic rival for us, but not a political enemy," she said in an interview with DER SPIEGEL.

On the other hand, the EU has declared China a "systemic rival." European hardliners like former NATO Secretary General Anders Fogh Rasmussen argue that the trans-Atlantic alliance should be bound more tightly together in an effort to counter Beijing. France, an EU member, and the United Kingdom, an EU member for now, are also providing military support to the U.S. by having their navy ships conduct sea patrols in the western Pacific.

But a joint political and economic strategy to counter China would require Trump to respect America's allies and ultimately to stick to his word. Both are unlikely. Trump, for his part, is threatening his European and Asian allies with the same methods he is using against China. And even after a year of trade warfare, it remains unclear how the conflict with China will ultimately resolve itself.

It will, as is often the case, depend on which route will offer a more promising path for Trump's reelection: an agreement with his unequal rival, Xi Jinping, which Trump can sell as the "biggest deal of all time" -- or using China as a powerful bogeyman for the upcoming campaign. In the early 21st century, there would be no more powerful one. 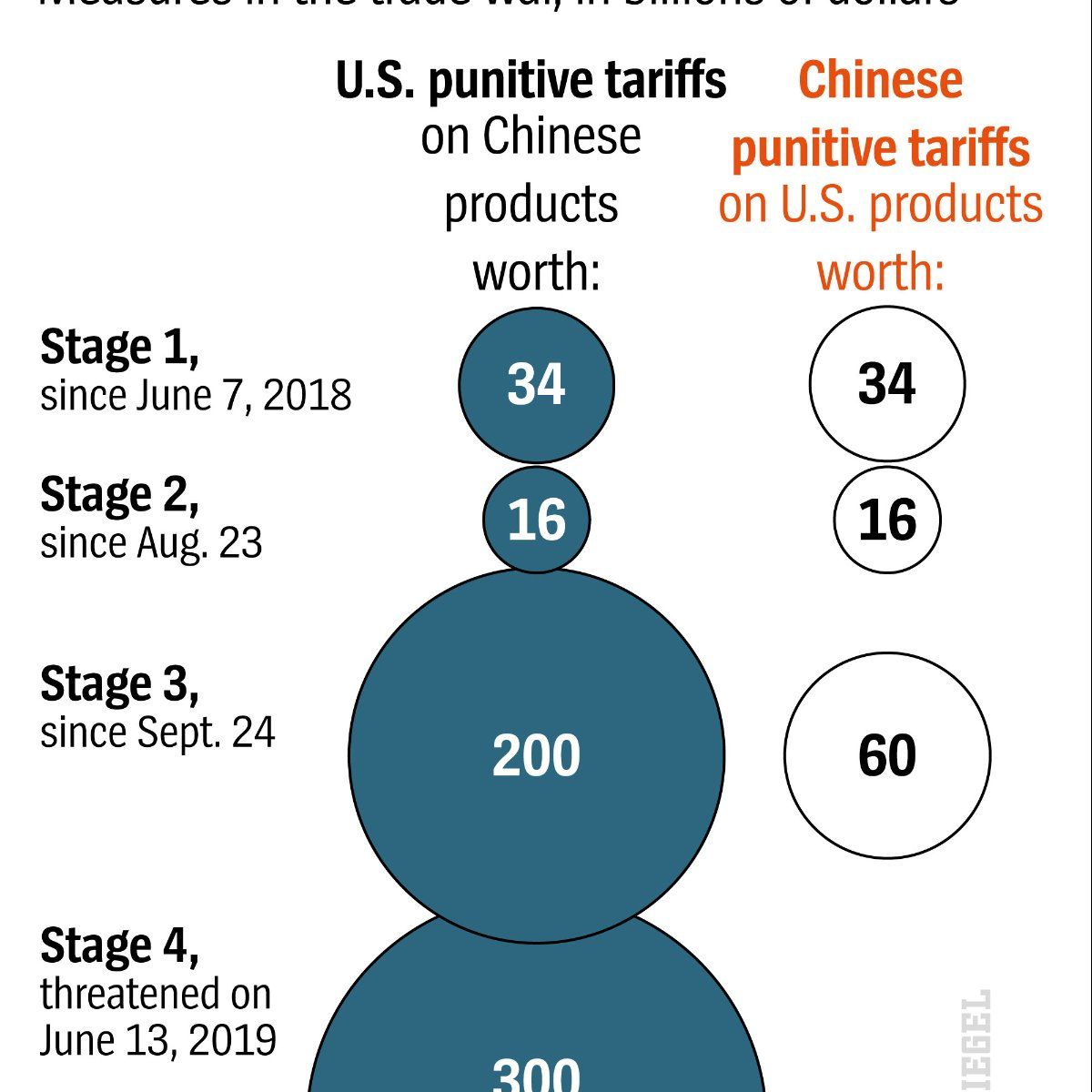 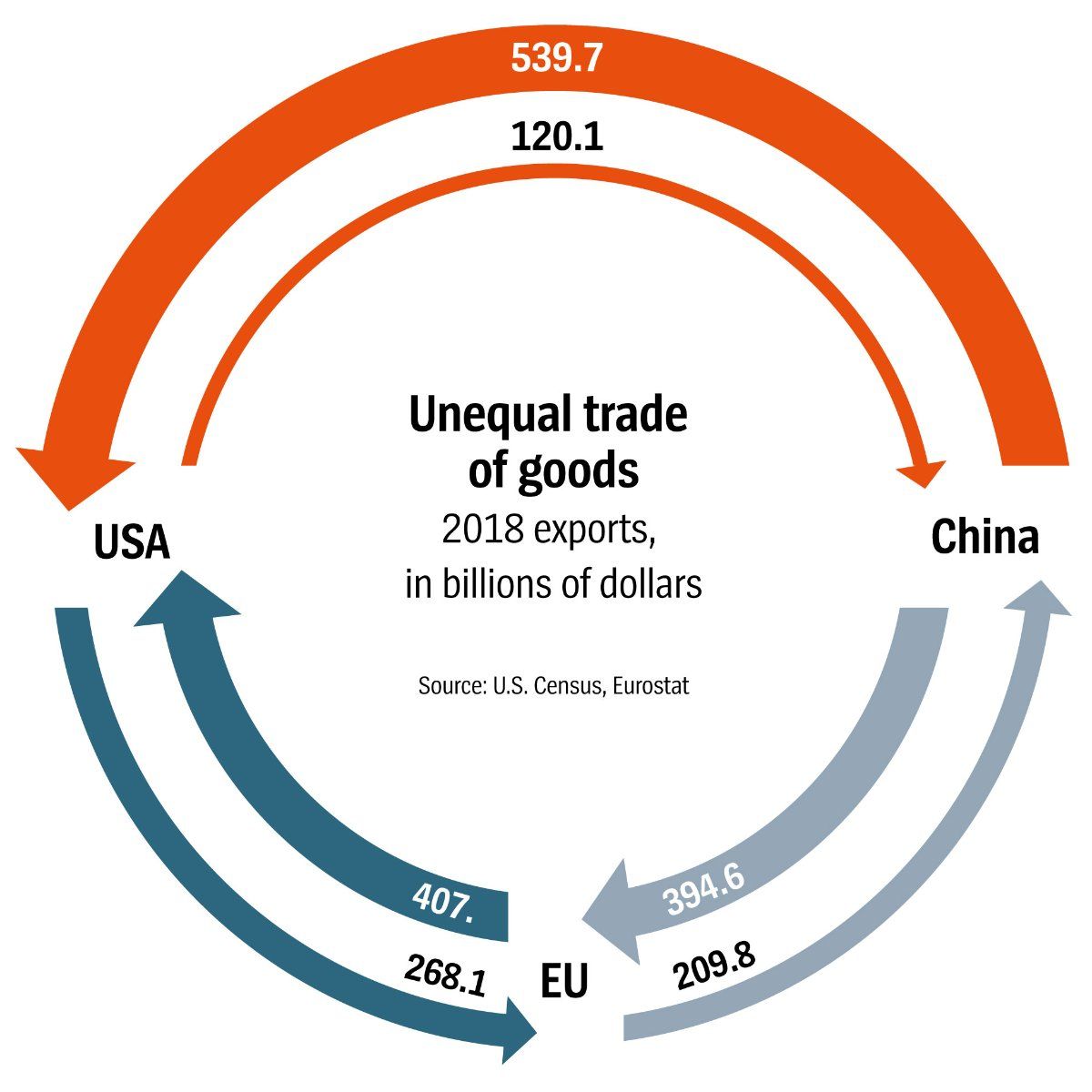