On Tuesday, Barack Obama is coming to Germany. But who, really, will be visiting? He is the 44th president of the United States. He is the first African American to hold the office. He is an intelligent lawyer. And he is a Nobel Peace Prize laureate.

But is he a friend? The revelations brought to us by IT expert Edward Snowden have made certain what paranoid computer geeks and left-wing conspiracy theorists have long claimed: that we are being watched. All the time and everywhere. And it is the Americans who are doing the watching.

On Tuesday, the head of the largest and most all-encompassing surveillance system ever invented is coming for a visit. If Barack Obama is our friend, then we really don't need to be terribly worried about our enemies.

It is embarrassing: Barack Obama will be arriving in Berlin for only the second time, but his visit is coming just as we are learning that the US president is a snoop on a colossal scale. German Chancellor Angela Merkel has said that she will speak to the president about the surveillance program run by the National Security Agency, and the Berlin Interior Ministry has sent a set of 16 questions to the US Embassy. But Obama need not be afraid. German Interior Minister Hans Peter Friedrich, to be sure, did say: "That's not how you treat friends." But he wasn't referring to the fact that our trans-Atlantic friends were spying on us. Rather, he meant the criticism of that spying.

Friedrich's reaction is only paradoxical on the surface and can be explained by looking at geopolitical realities. The US is, for the time being, the only global power -- and as such it is the only truly sovereign state in existence. All others are dependent -- either as enemies or allies. And because most prefer to be allies, politicians -- Germany's included -- prefer to grin and bear it.

German citizens should be able to expect that their government will protect them from spying by foreign governments. But the German interior minister says instead: "We are grateful for the excellent cooperation with US secret services." Friedrich didn't even try to cover up his own incompetence on the surveillance issue. "Everything we know about it, we have learned from the media," he said. The head of the country's domestic intelligence agency, Hans-Georg Maassen, was not any more enlightened. "I didn't know anything about it," he said. And Justice Minister Sabine Leutheusser-Schnarrenberger was also apparently in the dark. "These reports are extremely unsettling," she said.

With all due respect: These are the people who are supposed to be protecting our rights? If it wasn't so frightening, it would be absurd.

Friedrich's quote from the weekend was particularly quaint: "I have no reason to doubt that the US respects rights and the law." Yet in a way, he is right. The problem is not the violation of certain laws. Rather, in the US the laws themselves are the problem. The NSA, in fact, didn't even overreach its own authority when it sucked up 97 billion pieces of data in one single 30-day period last March. Rather, it was acting on the orders of the entire US government, including the executive, legislative and judicial branches, the Democrats, the Republicans, the House of Representatives, the Senate and the Supreme Court. They are all in favor. Democratic Senator Dianne Feinstein, chair of the Senate Intelligence Committee, merely shrugged her shoulders and said: "It's legal."

A Monitored Human Being Is Not a Free One

What, exactly, is the purpose of the National Security Agency? Security, as its name might suggest? No matter in what system or to what purpose: A monitored human being is not a free human being. And every state that systematically contravenes human rights, even in the alleged service of security, is acting criminally.

Those who believed that drone attacks in Pakistan or the camp at Guantanamo were merely regrettable events at the end of the world should stop to reflect. Those who still believed that the torture at Abu Ghraib or that the waterboarding in CIA prisons had nothing to do with them, are now changing their views. Those who thought that we are on the good side and that it is others who are stomping all over human rights are now opening their eyes. A regime is ruling in the United States today that acts in totalitarian ways when it comes to its claim to total control. Soft totalitarianism is still totalitarianism.

We're currently in the midst of a European crisis. But this unexpected flare-up of American imperialism serves as a reminder of the necessity for Europe. Does anyone seriously believe that Obama will ensure the chancellor and her interior minister that the American authorities will respect the rights of German citizens in the future? Only Europe can break the American fantasy of omnipotence. One option would be for Europe to build its own system of networks to prevent American surveillance. Journalist Frank Schirrmacher of the respected Frankfurter Allgemeine Zeitung newspaper recommended that over the weekend. "It would require subsidies and a vision as big as the moon landing," he argues.

A simpler approach would be to just force American firms to respect European laws. The European Commission has the ability to do that. The draft for a new data privacy directive has already been presented. It just has to be implemented. Once that happens, American secret services might still be able to walk all over European law, but if US Internet giants like Google, Apple, Microsoft and Facebook want to continue making money off of a half-billion Europeans, then they will have to abide by our laws. Under the new law, companies caught passing on data in ways not permitted are forced to pay fines. You can be sure that these companies would in turn apply pressure to their own government. The proposal envisions setting that fine at 2 percent of a company's worldwide revenues.

That's a lot of money -- and also a language that America understands. 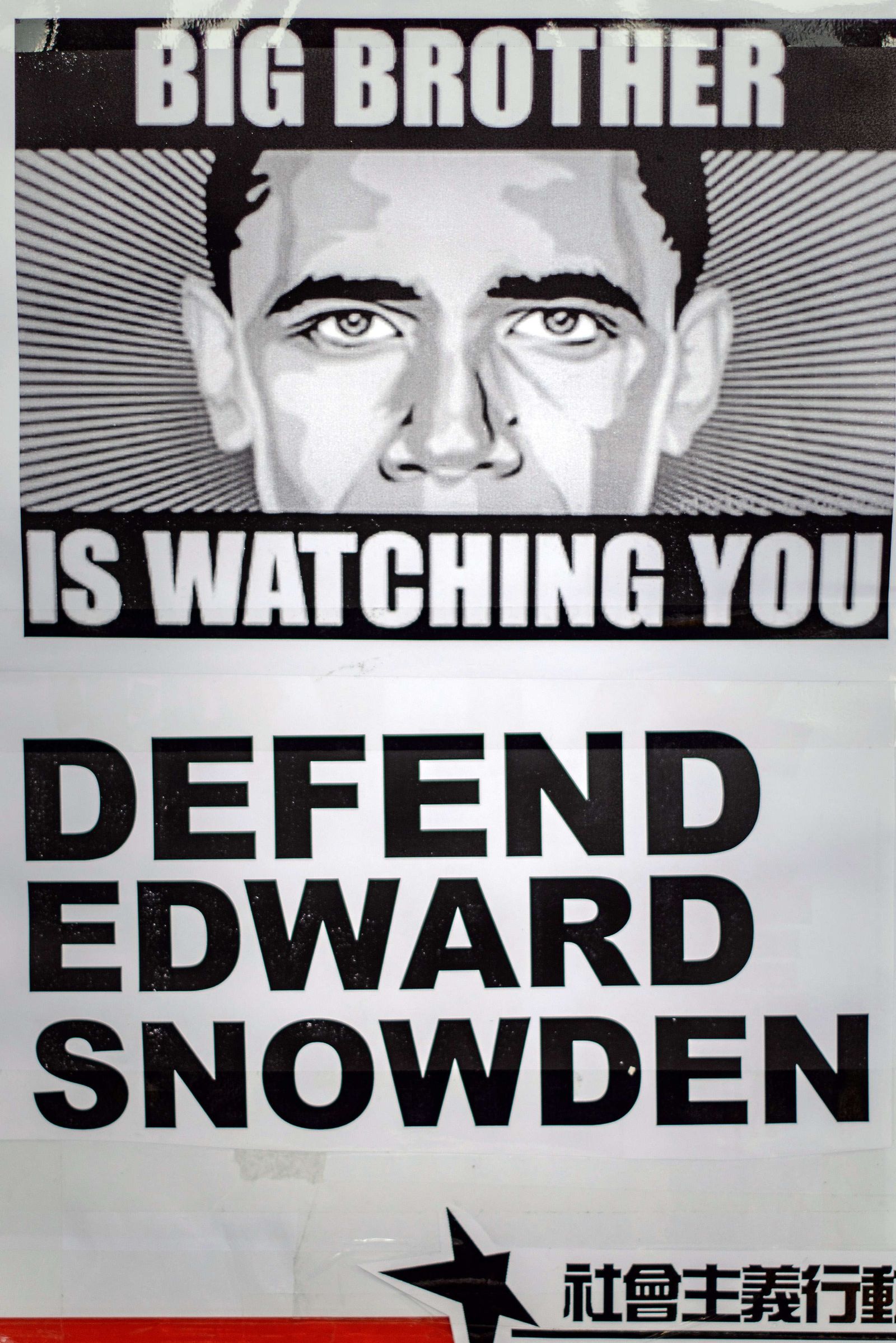 People around the world were shocked to learn of the extent of US snooping. This anti-Obama poster comes from Hong Kong.