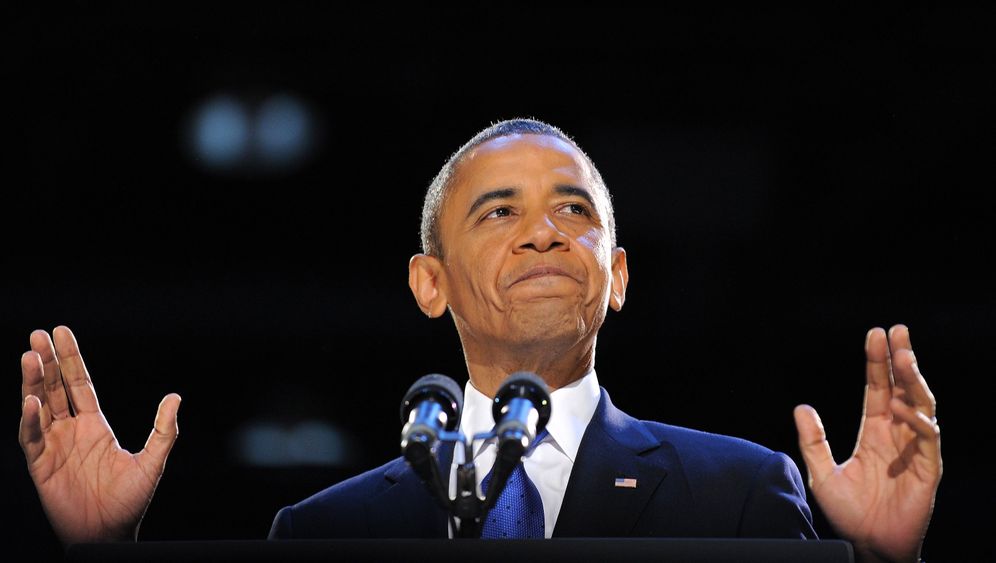 In the end, it wasn't even that close. US President Barack Obama easily surpassed the 270 electoral votes he needed to defeat Republican challenger Mitt Romney on Tuesday evening as swing state after swing state fell into the incumbent's column. At just after 1 a.m. on the East Coast, with his deficit insurmountable, Romney conceded defeat.

"This is a time of great challenges for America and I pray that the president will be successful in guiding our nation," Romney said in remarks before supporters in Boston. "I so wish that I had been able to fulfill your hopes to lead the country in a different direction, but the nation chose another leader." Just prior to his concession speech, Romney had called Obama to congratulate him.

European stock futures signalled a strong opening on Wednesday morning on the news as the uncertainty hanging over the leadership of the US economy was removed. Analysts, however, fear that the bump will be short-lived as the first challenge of Obama's second term approaches, that of coming to agreement with Republicans on a deficit reduction deal to dodge the $600 billion in spending cuts and tax increases that will automatically go into effect on Jan. 2, 2013 in the absence of such a deal.

German Chancellor Angela Merkel sent a letter to Obama on Wednesday morning to congratulate him on his victory. She noted how relations had always been close and cordial with Obama. "I am pleased to be able to continue with this," she wrote. "I would be pleased to host you again as my guest in Germany." She said the two had a common task in managing the global financial and economic crisis, the military and reconstruction mission in Afghanistan and the challenges posed by Iran's nuclear program.

In France, President François Hollande said Obama's re-election had been a "clear choice for an open, united America that is totally engaged on the international scene." According to the news agency AFP, he said that Obama's victory would "once again reinforce our partnership to facilitate the return of economic growth in our countries, to fight unemployment and to find solutions to crises that threaten us, notably in the Middle East."

Meanwhile, former German Foreign Minister Frank-Walter Steinmeier, now prominent member of the political opposition, said it is time for Europe to invest more in the trans-Atlantic relationship. "We have an interest in Europe remaining important which is why we have to invest more in cooperation across the Atlantic," said Steinmeier, who is currently the floor leader for the opposition Social Democrats in parliament. "We are always pouting in the corner waiting for the Americans to redefine the trans-Atlantic relationship."

European Union leaders likewise released a statement on Wednesday morning congratulating Obama. "We have the pleasure of extending our warm congratulations to President Obama on his re-election as president of the United States of America," read the statement released by European Commission President José Manuel Barroso and European Council President Herman Van Rompuy. "The United States is a key strategic partner of the European Union and we look forward to continuing the close cooperation established with President Obama over these last four years, to further strengthening our bilateral ties and to jointly addressing global challenges, including in the fields of security and economy."

Despite trailing slightly in the popular vote with some 70 percent of precincts across the US reporting, Obama managed an almost complete sweep of the nine swing states which appeared to be teetering between the two candidates on the eve of the vote. Obama took Ohio, Wisconsin, Virginia, Iowa, New Hampshire, Colorado and Nevada, ceding only North Carolina to Romney. Florida remains too close to call.

Obama thanked his supporters via Twitter before taking the stage in Chicago for an ecstatic victory speech. "Whether I earned your vote or not, I have listened to you," he said. "I have learned from you. And you've made me a better president." He vowed to continue efforts to work with Republicans.

Exit polls showed that the struggling US economy was top in voters' minds as they went to the polls, but also revealed that about half believe that many of the difficulties remain a holdover from the disastrous economic conditions that Obama inherited from his predecessor George W. Bush four years ago. With unemployment still high in the US and the economic recovery fragile, Romney had presented himself as the candidate better equipped to improve the lot of America's middle class.

'Best Is Yet to Come'

But polls also indicate that many voters had come to the conclusion that Romney was the candidate of rich Americans and believed that Obama would do more to help the country's poor. Obama also did better than Romney among Hispanics -- important for his victory in New Mexico and the swing state of Colorado -- and blacks, two voting blocs that Republicans have had a hard time attracting in recent elections. Exit polls also indicated that a majority of women tended to support Obama over his Republican challenger, who had been dogged by ill-considered comments on rape and abortion by two different conservative Republican candidates for the Senate. Both of them -- Todd Akin in Missouri and Richard Mourdock in Indiana -- lost.

Despite a victory that came quicker than many pundits had predicted, the next four years promise to be a hard slog for Obama. Republicans managed to defend their majority in the House of Representatives, while Democrats won a small majority in the Senate. Furthermore, with the popular vote split down the middle, it seems unlikely that a wave of bipartisanship is about to wash over Washington D.C.

And that could make Obama's next few weeks extraordinarily challenging. With unemployment at 7.9 percent -- the highest it has been for an incumbent president seeking re-election since Franklin D. Roosevelt in the 1930s -- and all eyes on the $1 trillion budget deficit, Obama must also quickly come to agreement with Republicans to avoid the so-called "fiscal cliff" looming in the new year. As part of the Budget Control Act of 2011, US lawmakers agreed that immediate $600 billion in across-the-board spending cuts and tax hikes would automatically go into effect at the beginning of 2013 should the two parties not reach agreement on budget deficit reduction measures -- cuts that economic experts believe would send the US economy into recession. In late 2011, the so-called "Supercommittee" of leading Congressional Democrats and Republicans failed to find a compromise acceptable to both parties.

Still, the mood in Chicago in the wee hours of Wednesday morning was one of celebration. And Obama did his best to stoke the wildly cheering crowd. "Tonight in this election you, the American people, reminded us that while our road has been hard, while our journey has been long," he said. "We have picked ourselves up, we have fought our way back, and we know in our hearts that for the United States of America, the best is yet to come."