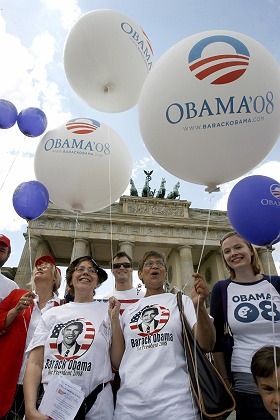 Obama is coming to Berlin, but the location of his speech is still uncertain.

United States presidential candidate Barack Obama is planning to visit Berlin in two weeks. "The date appears to be set for July 24," a German government source told SPIEGEL ONLINE. Both German Chancellor Angela Merkel of the conservative Christian Democratic Union (CDU) and Foreign Minister Frank-Walter Steinmeier of the Social Democrats (SPD) are expected to hold talks in the German capital with Obama.

"They want to get better acquainted with him," the source said.

However, the source, who asked not to be named, was reserved about the prospects of Obama holding a speech before the Brandenburg Gate."

"The Brandenburg Gate is the most famous and history-rich site in Germany," the Chancellery source said. In the past, the location has only been used on very special occasions for political speeches by world leaders. And it has been reserved for use only by elected American presidents, not candidates. The decision on whether the Democrat can speak at the location ultimately lies with the Berlin state government. Chancellery officials are concerned that the Brandenburg Gate could be turned into an "arbitrary stage" that other campaigns could also seek to use in the future.

It's a traditional practice for US presidential candidates to visit Germany before the election. However, the source pointed out that agreements can only be made with elected presidents. The source also noted that a the German federal government would also be equally pleased to play host to a visit by Republican candidate John McCain. The door is just as open for him, the source said.

SPIEGEL first reported on the expected visit this weekend.

The news also follows a survey taken by Germany pollster Emnid for publication in the Bild am Sonntag newspaper this weekend that found that 74 percent of Germans said that if they could cast a ballot in the US election, they would vote for the presumptive Democratic Party nominee. Only 11 percent said they would vote for his Republican Party contender, John McCain.