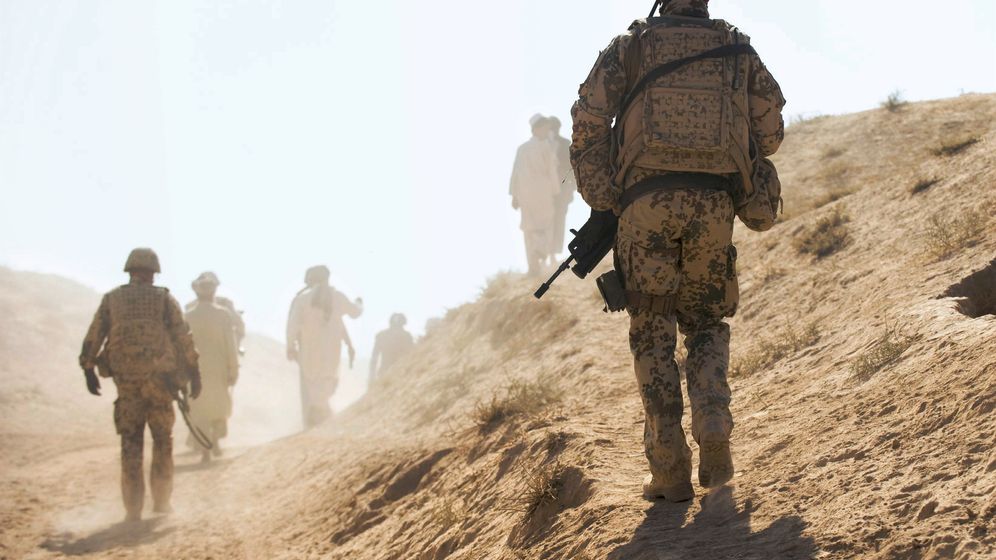 Abdul Gafar can't bear it when the sun rises in the morning and all he has to look forward to is working in the heavy dirt of his fields and coming home to the women in his house -- peace, in other words. Gafar, a militia commander in his early 40s, grew up with a Kalashnikov in his hand the way other children grow up with Lego sets.

The quiet years here in Kunduz weren't his best years: eight insignificant winters without anything to do. There were, of course, plenty of disarmament programs, monitored by representatives of the government in the faraway capital and by international experts. Now his old AK-47 is leaning against a wall in the living room again, out in the open, and Gafar, who is Pashtun, feels strong once again.

The 60 men under his command patrol the villages around Kanam-i-Kalan, a town surrounded by fields and pastures, 18 kilometers (11 miles) northeast of the city of Kunduz. Gafar stretches and smiles: "I'm a good shot, and I even hit my mark at night. I have rocket launchers and mortar shells."

The Taliban Come to Town

Last year, at the end of March, the Taliban came to Kanam-i-Kalan for the first time. The men, in their black turbans, roared through the town on motorcycles at night, in groups of up to 20 fighters at a time. They knocked on doors, holding their Kalashnikovs in their hands, expecting the residents to prepare dinner for them.

Most of the residents of Kanam-i-Kalan are Pashtuns, like the Taliban. They remember all too well how harsh and grim life was under the strict regime of the religious zealots, before the Americans drove them out in November 2001. Most never want to live under the heel of the radical Islamists again.

The Taliban specifically targeted former comrades, recruited spies (at least two in each village) and enlisted young fighters. They levied a religious tax known as ushr, demanding 10 percent of all agricultural earnings. They eventually set up checkpoints along the roads and began checking vehicles.

The Afghan government never showed up to put an end to these activities. It was simply absent. When the situation became too dangerous, the few police officers left the town, the Afghan army was unavailable and the German military stationed in Kunduz, the Bundeswehr, was busy coping with its own problems. There was no one left to protect the local population.

Then the Taliban murdered Abdullah i-Sabaz from Khan Abad, hanging him from a tree for protesting against them. They also shot Mohammed Ismail, a policeman from the neighboring village. The noted attached to his body read: "We will kill anyone who supports the government."

"That was the turning point," says Gafar. It was also the day he opened his secret weapons depot. He had concealed it from the United Nations inspectors and the International Security Assistance Force (ISAF) for years. Now he expanded it by buying a few automatic rifles. The elders from 14 surrounding villages, representing close to 50,000 people, held a meeting. They elected commanders and gave themselves a command structure, and they trained their fighters. That was in the summer, and in late November they made their move. They told the Taliban that they could either leave or be shot. The Islamists left.

Filling the Vacuum of Power

The arbakis, or civilian militias, are as much a part of Afghan history as the wars that have been raging for more than 30 years. Since 2002, the international community has been trying to systematically disarm the Afghan militias. With the help of costly programs, the men were to return to a normal life as farmers, market vendors or craftsmen. A UN report from last year proudly concludes: "Excellent progress was (...) seen in disbanding illegal armed groups (IAGs)."

The disarmament of Afghanistan is a noble objective, but the reality is a different story. Last year, more than 2,400 civilians were shot, hung, beheaded or blown up. Two-thirds of these victims were murdered by the insurgents.

Militiamen are a rough bunch. They make their own laws, steal, drink and take girls and little boys, say the people in Kunduz. Nevertheless, many villages are now seeking to provide their own security with local militias. Men with Kalashnikovs thrown casually over their shoulders and bazookas strapped to their backs are suddenly welcome again in Kunduz, as well as in the country's south and southeast -- everywhere there is heavy fighting.

Militias fill the vacuum that the weak state allows to develop and that 100,000-odd Western soldiers are not filling. It is a precarious development that could be tolerable as a temporary solution, provided a strong Afghan state really develops in the foreseeable future. If it doesn't, the militias will quickly lead to armed rivalries between individual villages and a bloody gang culture. In that case, the arbakis would only be the forerunners of a civil war.

Learning from Experiences in Iraq

In the Kunduz district of Khan Abad, the militias that were jointly fighting the Taliban in November are already at odds. "It'll be every man for himself soon," predicts Abdul Mohammed from the village of Aqtash, who sells pots and plastic jugs in the local bazaar.

The Americans, however, also see opportunities in the new developments. Local government representatives are even outfitting the militias with weapons and ammunition, as part of a program the US military calls the "Community Defense Initiative." General Stanley McChrystal, the American commander of ISAF, sees the village militias as potentially strong allies in the fight against the Taliban.

Before coming to Kabul, McChrystal carefully analyzed what went wrong in the invasion of Iraq and what tools eventually brought about a fragile peace. They included the "Sons of Iraq," Sunni militias that began, after three years of war, to rise up against al-Qaida terrorists in August 2006, eventually driving them from their stronghold in Anbar province. These men knew every corner of their neighborhood, a quality that, when combined with the technical superiority of the Americans, produced the desired results.

In Afghanistan, the plan is to incorporate the arbakis into the Western alliance as a kind of loosely organized band of foot soldiers. Thousands of these armed men will then defend their own villages. "The idea is to convince people to take responsibility for their security," says an American colonel on McChrystal's staff in Kabul. His special forces are now working closely with the militia commanders, and in Kunduz the two forces are already hunting down the Taliban together.

In Kunduz, the regional intelligence chief is kneeling in front of a giant map, so detailed that it includes even the tiniest streams and villages. General Mohammed Daud Ibrahimi, 43, is a powerful-looking man with bristly hair and darting eyes. He runs his fingers across the map and points to where the Taliban insurgents are located: in the center, in Gor Tapa, farther to the south, in Aliabad, and in the "cleared areas" to the northeast. The Afghan intelligence service, NDS, has become something of a coordinating office for militias in the north.

Today, when hundreds of armed men lie on the lookout in the troubled surrounding areas and report unusual activity to NDS headquarters in Kunduz, it is partly General Daud's achievement. "In places where they weren't active yet, I convinced residents at the end of last year, village by village. I provide the ammunition, and I say: Fight against the Taliban yourselves. That's how I made Kunduz safer again."

But there is still a clear discrepancy between the words of Afghan security officials who claim, after every operation, that the region in question is free of terrorists, and the fears of the local population. It senses that the Taliban has only withdrawn and could possibly return in greater force, even after the arrest of the key Taliban commander in Kunduz, Mullah Salam, in Pakistan a few weeks ago.

Militias have taken control of the northern part of the country once before. At the time, they also promised to protect the population and, at the time, the real issues revolved around who had power and influence in Kunduz, and who was collecting road tolls and fees from drug shipments. That was in the early 1990s, after the withdrawal of Soviet troops.

The Return of the Good Old Days

The Western coalition's new friends are the same militia leaders from those days, minor commanders like Abdul Gafar from Kanam-i-Kalan, who celebrated his first victories during the Soviet invasion and loves fighting more than peace. They also include men like Mir Alam, a notorious warlord.

Alam is sitting in his living room, patting his two-year-old daughter on the back and smiling. The veteran fighter is one of the most feared men in Kunduz. He was once one of the commanders serving under Ahmed Shah Massoud, the great strategist of the Northern Alliance which fought the Taliban. He also supported former Afghan President Burhanuddin Rabbani, whose marauding troops crisscrossed the country, stealing, kidnapping and raping. Many Kunduz residents remember this period as the worst years of their lives. And now they are expected to see the same men as their new protectors?

After the campaign conducted by the Americans and their allies, Mir Alam was deprived of power for a time. US soldiers searched his house for drugs and weapons, and German Bundeswehr commanders avoided all official contact. Mir Alam surrendered 2,000 weapons but, according to residents, he kept 3,000 more hidden away.

Then, a few months ago, intelligence chief General Daud personally reactivated the veteran fighter. The two men are bound together by close family ties -- the general's sister is married to Mir Alam. The old and new militia chief was General Daud's best choice for organizing the militias' defensive campaign in the region last year. Mir Alam is also in close contact with the US armed forces, and he has even been mentioned as the future chief of police in Kunduz.

At the end of our meeting, Mir Alam poses in the courtyard with his fellow soldiers from days gone by, all of them smiling, as they did in the past. The good old days, which were everything but good for the residents of Kunduz, have apparently returned.

Enayat Najafizada contributed to this report.