DER SPIEGEL: General Hayden, in January, U.S. intelligence reached the conclusion that Iran was more or less complying with the Iran deal ...

Hayden: ... not more or less. They were complying. (Director of National Intelligence) Dan Coats said: Iran is further away from a weapon than without this deal, and we know more about the Iranian nuclear program with this deal than we would without it.

DER SPIEGEL: So why did Trump decide to pull out of it, despite the advice of his intelligence agencies?

Hayden: Because he doesn't make decisions based upon objective reality. He has this kind of a priori, assumed narrative of the way the world works, and he has almost a natural self-confidence in it. Almost all American presidents have said: "On balance, the more free trade there is, the better it is for America. On balance, immigration is a net positive for the United States of America. On balance, America is strengthened by having mature, strong allies." And we now have a president who is opposed to free trade, who views immigrants as a threat and who views allies as a burden. And that's turning the America of the last 75 years on its head. The single most powerful predictor of where the president comes down on any given issue is where Barack Obama was. He does the exact opposite of what Obama did. You've got the Affordable Care Act, the Paris Climate Accord, the Trans-Pacific Partnership, Syria, and now the Iran deal.

DER SPIEGEL: What do you think are the broader ramifications of the U.S. abandoning the deal?

Hayden: The first line of confrontation is not with the Iranians, but with our European friends. They have a legitimate right to get an answer to the questions, "Do our views matter? Do the Americans take our views into consideration? In addition to whatever it may or may not do in the Persian Gulf, it will alienate our best friends in the world, and we'll end up with a trans-Atlantic argument.

DER SPIEGEL: Trump often criticizes the U.S. intelligence community. He feels he is under surveillance. Do the agencies have as much power as they used to?

Hayden: The president views relationships through the lens of loyalty to him. This is troubling because our ethos inside government is the rule of law. Not loyalty to the man but loyalty to the constitution. What, then, do the fact-bearers do when the president's willingness to accept your facts is governed more by your relationship to him than it is by the evidentiary stack you have behind the facts? You have to keep trying regardless. You keep addressing the issue.

DER SPIEGEL: French President Emmanuel Macron came to Washington to try to convince Trump to remain in the Iran deal, as did German Chancellor Angela Merkel and British Foreign Secretary Boris Johnson. What does it mean that such efforts were unsuccessful?

Hayden: Again, he's basing his decision-making on something other than what you and I would be accustomed to from a president, a chancellor or prime minister. And as we go further into the administration, he seems to be surrounding himself with fewer naysayers and more people who seem to think and sound more like he does.

Hayden: Bolton is a very smart man. He knows a lot, he's a pretty good bureaucratic infighter. But his job is about process. John has very strong views, he knows how things work. I think he is going to have to struggle with himself to be the process guy, when his instincts are to be the answer guy.

DER SPIEGEL: His answer often seems to be war. Are you concerned?

Hayden: I'll allow myself to say he's more willing to be confrontational.

DER SPIEGEL: What does that mean for U.S. foreign policy?

Hayden: We're a big country with a fairly healthy, robust society. American diplomacy, understood over the long term, is relational, not transactional. And the president now just bent Britain, France, and Germany to America's will, and he's going to celebrate this as a "victory" -- in air quotes. He'll view that as a transactional success. But relationally, it's a disaster, and the problem is that the costs of this "victory" are long term and hard to measure, but they're real costs.

DER SPIEGEL: The reputation of intelligence agencies has suffered tremendously in the last several years, partly due to the many scandals: the CIA torture program after 9/11, the justification for the Iraq War, mass surveillance as unveiled by Edward Snowden. Isn't Trump partly right in criticizing the agencies?

Hayden: I don't have to accept all of your premises to answer your question. But American intelligence is a human enterprise, sometimes you have a good day, sometimes you don't. Full disclosure, I'm in the room voting for the Iraq national intelligence estimate. I've got fingerprints on renditions, detentions, interrogations, targeted killings and electronic surveillance. You can probably tell from my tone, I'm cool with that. What I did was effective, lawful and appropriate.

DER SPIEGEL: But isn't that the major problem for U.S. agencies: that they either got it wrong in crucial situations or pushed the envelope too hard?

Hayden: We have always rested uneasily inside American democracy. I was fond of saying as director of NSA, I only need to be two things to be successful -- powerful and secretive. On balance, American intelligence is actually a pretty good enterprise. We've never been used by a president as a political tool, which not all agencies around the world are able to say about themselves. When Donald Trump tweeted after the election that Obama wiretapped his phones in Trump Tower, there was the allegation underneath it that Barack Obama used American espionage for political purposes. In an interview afterward, the president said: "A lot of people agree with me, that's why I'm right." That's it. That's the post-truth world.

DER SPIEGEL: In your recent book "The Assault on Intelligence," you write that people in the U.S. intelligence world have never served a president for whom truth doesn't matter. Why is this such a big issue?

DER SPIEGEL: For a former spy, you're quite outspoken. Along with former FBI Director James Comey, former CIA Director John Brennan, former Director of National Intelligence James Clapper, you are quite critical of the president. Is this a form of revenge?

Hayden: This already began in the Obama years, somewhat in defense of some of the current issues. We thought President Obama was hanging good people out to dry in the Snowden affair. But two presidents approved the most controversial program to collect metadata, Congress knows, the court oversees it. But I'm not so sure that constitutes consent of the governed anymore. So a lot of us realized that if we were going to survive in American society, we've got to tell people what we're doing.

DER SPIEGEL: You are a strong supporter of Gina Haspel's nomination as CIA director, although she was deeply involved in the torture program on CIA "black sites." Why is she the right candidate?

Hayden: Who else you got? By merit alone she's a very good and wonderful choice.

Hayden: First of all, we don't define it as torture. And second, she didn't destroy evidence. She was a key member of our counterterrorism center for extended periods of time.

DER SPIEGEL: While the security apparatus was focusing on terror, Vladimir Putin launched his grand campaign to influence the U.S. election. Why is Trump so reluctant to criticize the perpetrator?

DER SPIEGEL: Are the security agencies doing enough to protect the mid-term elections?

Hayden: We can do extraordinary things, but our system only goes extraordinary when the president says: "All right. Everybody in. Here's what we're going to go do." He has not done that with regard to the Russians. So if the new NSA director discovers something about the Russians, where does he go? Who does he tell? What body is empowered to do something about it? That's my point.

DER SPIEGEL: Are you surprised by the daily revelations regarding the investigation by Special Counsel Robert Mueller?

DER SPIEGEL: Is that enough to prove collusion?

Hayden: No, it's sufficient to prove stupidity. I used to think that this is going to end up in a cloud and that will become a national Rorschach test with everybody seeing exactly what they want to see in the end result. But the longer the investigation goes, it looks as if there's more "there" there. It just seems to be an awful lot material that the special counsel is looking at. 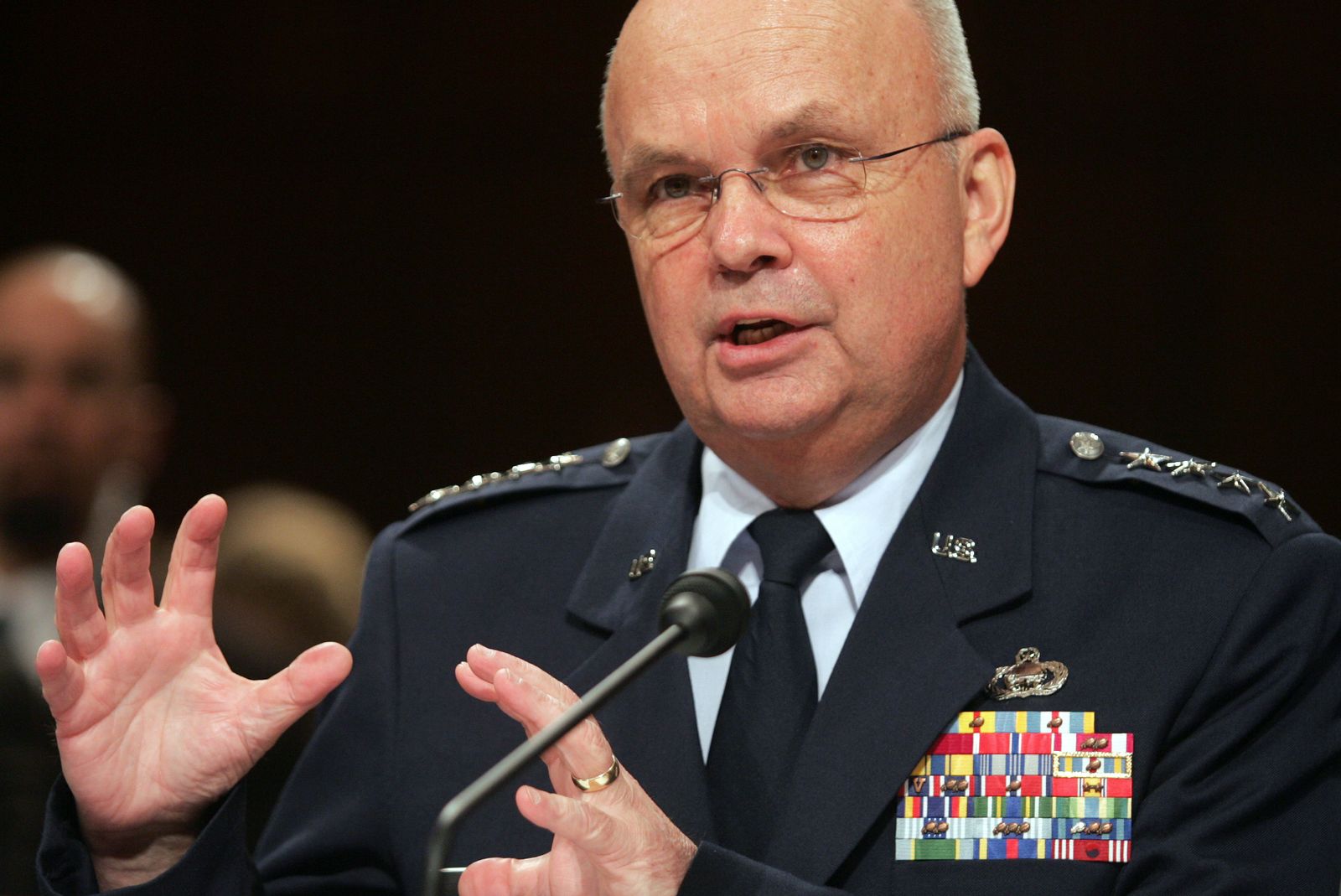