Khaled Meshal, 60, spent more than 20 years as head of the Hamas Politburo. At the end of May, he stepped down from his post and will now become the chairman of the movement's religious council. He is nevertheless still considered the most powerful man within Hamas, which is classified as a terrorist organization by both the European Union and the United States. The Islamist group won the 2006 Palestinian parliamentary election, but then withdrew from government under pressure from the international community. In 2007, Hamas seized power in the Gaza Strip by force. Meshal has been living in exile since 1991, first in Kuwait and later in Jordan, where he survived an assassination attempt by Israel's Mossad using poison. He then moved to Syria, but he left Damascus and headed to Qatar after the breakout of the civil war. The building where the interview takes place is located in an outlying neighborhood of Doha and serves as the Politburo's offices. The security measures are very thorough. Even the pens brought by the two DER SPIEGEL journalists are replaced.

SPIEGEL: Mr. Meshal, U.S. President Donald Trump has announced a new peace initiative in the Middle East. In the speech he gave on May 21 in Saudi Arabia, he divided the Islamic world into "good" and "evil." It's his view that Hamas clearly falls into the "evil" category.

Meshal: We reject President Trump's view. It was a mistake to say that -- a major wrongdoing.

SPIEGEL: Trump has placed Hamas in the same ranks as al-Qaida or Islamic State (IS). Was he wrong to do that?

SPIEGEL: Before Trump's Middle East trip, you spoke of a "historic opportunity." What had you been expecting?

Meshal: We are witnessing a new American president who speaks differently than his predecessors. If he is serious enough, he could pick up the opportunity that is available to create real peace in this region. With a new approach, he could achieve what all previous approaches have failed to. Regrettably, what we are now seeing is that the new U.S. government is stuck in the same old, partisan thinking patterns in terms of our resistance. That is a mistake.

SPIEGEL: In the past, Hamas has never participated in peace talks. Were you hoping that might change now?

Meshal: In principle, Hamas is not keen to be part of an unjust negotiation process in which the only things that comes out of it are new concessions for our people. Why should we negotiate? Unfortunately, even with the Trump administration, I don't see any real vision toward achieving just peace. And, on the other hand, any approach that doesn't acknowledge the Palestinians' legitimate rights is doomed to fail. That also applies to any strategy that ignores the fact that Hamas is a part of the Palestinian resistance.

SPIEGEL: Trump's initiative appears to envision bringing together Israel, the Arab states and the moderate Palestinian faction led by President Mahmoud Abbas. One idea is to deescalate the conflict by improving the economic situation in the Palestinian territories. What do you think about that?

Meshal: The Palestinian issue is a national, political issue. It's not to be seen as an economic issue that would be solved or addressed by some economic approach that makes the living standard of the people under occupation better. The Palestinian people are fed up with talks that have been going on for years. We are looking for peace, but we are not looking for a new peace process. This process will fail.

SPIEGEL: Hamas recently published a new policy document. It is less radical than the 1988 founding charter and appears to be aimed at ending the international isolation. Are you disappointed that it didn't seem to make any impression on Trump?

Meshal: The negative stance mentioned by the president did not come as a surprise to us. It cannot relate to the document, because it reflects our development over the last 10 years and it is directed primarily at Palestinians. We wanted it to show our vision, but also the desire to the deal with the conflict pragmatically.

SPIEGEL: Let's talk a bit about your vision. According to it, Hamas would accept a Palestinian state within the 1967 borders -- meaning before the Six Days' War -- at least provisionally. Does that mean that you would give de facto recognition to Israel's right to exist and the two-state solution?

Meshal: Our political document shows that we are prepared in the context of a national consensus to accept a state on the lines of the 1967 borders, with Jerusalem as the capital and fulfilling the right of return for refugees. That does not mean that this document recognizes the legitimacy of the Israeli occupation. Nor does it mean that we will cede any part of the Palestinian territories.

SPIEGEL: When you speak of the Israeli occupation, are you referring to the occupation of the West Bank or the entire region, from Jordan to the Mediterranean Sea?

Meshal: The document is clear in that sense. For one thing, we will not concede our vision, our principles and our legitimate rights as Palestinians. That includes Palestinian land, which we will not give up. At the same time, however, we are prepared to accept a state within the 1967 borders within the scope of a consensus. That is our pragmatic, realistic policy.

SPIEGEL: But there is a serious contradiction between your policy and your vision.

Meshal: Yasser Arafat and Mahmoud Abbas have recognized Israel's right to exist. What was the outcome of that political stand? The Israeli government has never recognized our right to a sovereign state and self-determination. The international community has been extracting concessions from the weaker side suffering under the occupation. For decades, this strategy has done absolutely nothing for the Palestinians. Now they are demanding that Hamas go the same route. We will not accept that. Extracting concessions is not the key to achieving peace. Pressure must be exerted on the occupier.

SPIEGEL: Is your new line just window dressing? Is the destruction of Israel still Hamas' goal?

Meshal: Our pragmatic approach shows how seriously we are about this. We are prepared to accept a state within the 1967 borders.

SPIEGEL: But would you be willing to make concessions in order to make peace possible?

Meshal: When we see seriousness from the Israeli side toward addressing the requirements of real peace in this region, then we would be prepared to make concessions.

SPIEGEL: The document no longer makes any mention of Israel being the archenemy. Instead it is referred to as a "Zionist entity." But it does not rule out violence. Does this mean that Hamas will continue with its rocket attacks and suicide bombings?

Meshal: For us, this is not violence, this is legitimate resistance. This is our people's right to resist Israeli occupation.

SPIEGEL: But you target civilians.

Meshal: No. We target the Israeli occupation, not civilians.

SPIEGEL: When your Qassam Brigades fire rockets at Israel, the ultimate targets are completely random.

Meshal: We are defending ourselves with the simple military means that we have at our disposal. We are keen to develop and to get accurate, sophisticated weaponry in order to precisely target Israeli military installations.

Fighters with the Qassam Brigades in the Gaza Strip

SPIEGEL: But the people who are dying are often civilians.

Meshal: No, most are soldiers. In the last war in 2014, the Israeli side lost 70 lives, and 95 percent of them were soldiers. On the Palestinian side, 2,500 people were killed, of which almost 80 percent were civilians. The Israeli army had the most sophisticated weaponry and they used it against residential towers, schools and hospitals.

SPIEGEL: Because Hamas often hid weapons and fighters in them.

Meshal: This is the narrative that was propagated by the Israeli occupation.

SPIEGEL: But even the United Nations confirmed this had happened in the Gaza Strip.

Meshal: We do not use our people as human shields.

SPIEGEL: Does the new political document replace the old Hamas charter from 1988?

Meshal: We are not talking about the replacement of the charter. The charter was a historical document dating back to the origins of Hamas.

SPIEGEL: Is it out of date now?

Meshal: I like to use my own language. Political movements are like living creatures -- they develop. Each document expresses the times, the different stages and is part of the natural development.

SPIEGEL: What is the situation in the Hamas-governed Gaza Strip? A hardliner from the military wing was recently elected as the head of the government there. Unemployment is very high; the people are suffering under a shortage of food and supplies and very little reconstruction has happened since the war in 2014. Major protests were held against the Hamas regime in the past year. Why can't Hamas govern Gaza in a more efficient, better way?

Meshal: The protests were against Israel, not against Hamas.

SPIEGEL: The students even organized a hunger strike because they were frustrated about the situation in Gaza Strip given that they have no chance of finding a job. They complained of corruption, cronyism and the brutal oppression.

Meshal: The anger of the people in the Gaza Strip is mainly directed toward those who are responsible for the dire living conditions, for the occupation and the blockade. But, yes, for sure, as is the case everywhere, there are some who oppose the government. But they are very few compared to the close to 2 million inhabitants of Gaza suffering under Israel, the occupying power.

SPIEGEL: Gaza is also being blocked on the Egyptian side. President Abdel Fattah Al-Sisi has ordered the flooding of smuggling tunnels and bombed and resettled villages on the border. Do you feel you have been abandoned by the Egyptian government?

Meshal: We have our differences over what the Egyptian government is doing. But good relations with Egypt are extremely important to us. Egypt is our neighbor and the largest Arab country. The people in all Muslim countries are on our side.

SPIEGEL: Perhaps the people, but what about the political leaders?

Meshal: There are some who support us and others who are on the other side. They bow to pressure from the international community. But there is no reason for any of them to be against our Palestinian concerns. We don't interfere in any of the domestic policies of other countries. We are a national movement and we are concentrating on our conflict and the battle against the Israeli occupation.

SPIEGEL: After two decades, you have left your position as the head of Hamas' Politburo. Why?

Meshal: It was the right time to leave. Hamas' leadership needs new blood. I also wanted to show that it is possible in this region of the world to leave office voluntarily, before a person dies.

SPIEGEL: Now you are set to become the chairman of Hamas' religious council. Do you intend to run one day to become Palestinian president and Abbas' successor?

Meshal: I will continue to serve my people. But the presidency of the Palestinian Autonomous Authority is not a free, sovereign position -- it is an office that is confined by the occupation. That's why this position is not interesting for Hamas.

SPIEGEL: Mr. Meshal, we thank you for this interview. 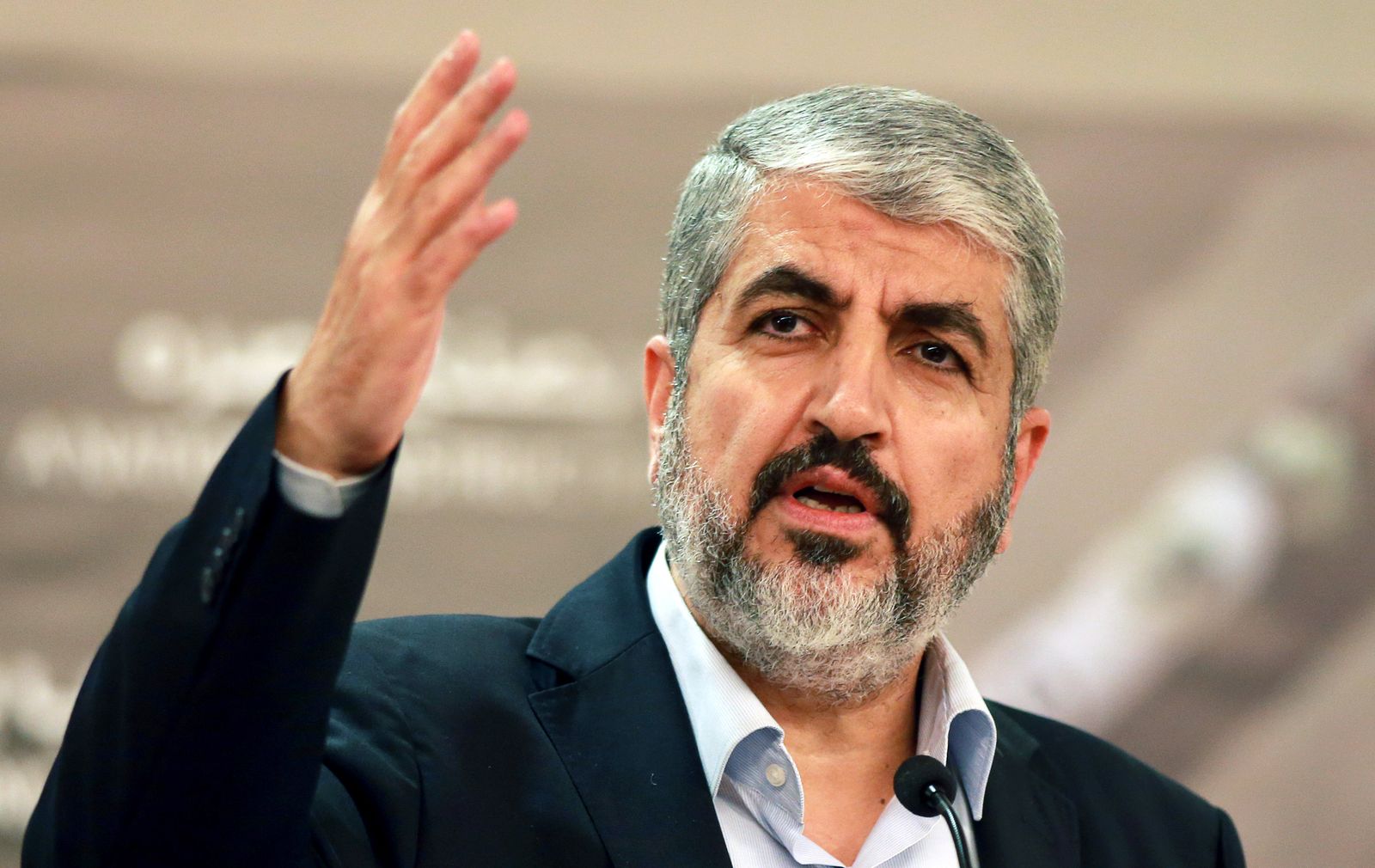 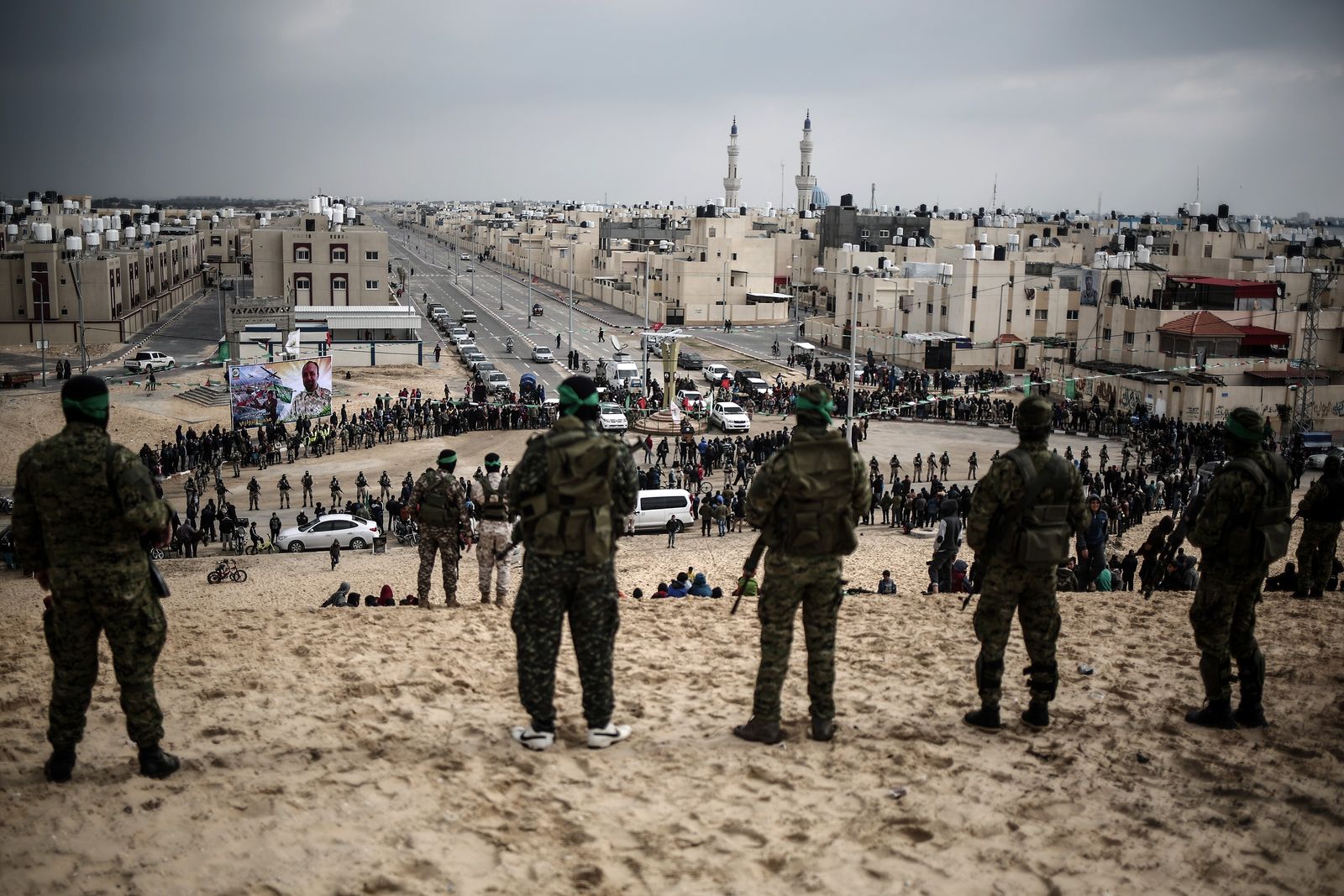 Fighters with the Qassam Brigades in the Gaza Strip