SPIEGEL: Will American foreign policy ever be the same after this embarrassing leak of US diplomatic dispatches?

Brzezinski: Absolutely. There was a saying once in Vienna during the good old days of the Habsburg Empire that when things went wrong and people were asked for comment, the comment usually was: "Well, it's catastrophic but not serious." And that's the way this is.

Brzezinski: Most of the cables revealed consistency with what the United States said publicly. There may be some embarrassing things, but basically, business will go on as usual. Our cables aren't very different from the cables the German ambassadors send or Russian ambassadors or Chinese or French.

SPIEGEL: These nations are deeply offended by the indiscretions, though. Could the Americans recall ambassadors to mend fences?

Brzezinski: I would think not, unless there is something in the cables that an ambassador has said about a senior statesman of the country to which he's assigned, which would preclude any degree of personal relationship between the ambassador and that senior statesman.

SPIEGEL: The US Ambassador in Berlin, Philip Murphy, wrote a very unflattering report on German Foreign Minister Guido Westerwelle. He called him "arrogant" and "opportunistic" and concluded: He is no Genscher.

Brzezinski: That may make it more difficult, although Murphy probably deals more seriously with the chancellor than the foreign minister, given the nature of the German arrangements.

SPIEGEL: So it will return to business as usual? Really?

Brzezinski: There are slightly mystifying aspects to this whole operation. I do see some strange degree of emphasis on some issues.

Brzezinski: Just look at the degree of emphasis that has been put in the initial wave of revelations on discrediting several pro-American Arab governments by highlighting their demands for military action against Iran. That could be very troublesome within some Arab countries. It's also interesting that so much emphasis is put on leaks that could be calculated deliberately to damage American-Turkish relations.

SPIEGEL: In any case, the overall picture that emerges is that of a disoriented world power. Nowadays, America has to rely on very unreliable partners in important regions of the world. It knows next to nothing about dangerous foes like North Korea. And it is extremely wary of an ever stronger China.

Brzezinski: Is any of that news? America has relied on unstable partners throughout its history. And it is clear that China is historically self-confident while we feel the historical forces are against us.

SPIEGEL: US officials say the leaks might endanger the effort to improve relations with Russia. Is that a serious concern?

Brzezinski: Not to me at this stage, unless someone shows me things which I should consider in that light.

Brzezinski: Everyone knows that there are allegations that he is extremely rich. Then the question is how you become rich when you are a public servant, and, of course, there is a well-known answer to that.

SPIEGEL: Also, Putin is described as an alpha male while President Dmitri Medvedev is perceived as somewhat of a weakling. Would you agree?

Brzezinski: There is some reason to share that view. After all, Medvedev was hand-picked by Putin. But it is also a fact that Medvedev is now beginning to surface much more as a serious player. I had an opportunity to participate in a meeting with him in Moscow four weeks ago, and he struck me as a very self-confident person with his own individual views on foreign policy. We will know within a year or so whether Medvedev now has genuinely independent support.

SPIEGEL: The dispatches show how European leaders are clamoring for access in Washington and the US coolly plays them against each other.

Brzezinski: Interrelationships between people are affected by respective hierarchies, who is on top, who is less on top. Anyone familiar with royal courts knows that. And the US descriptions of Nicolas Sarkozy, Angela Merkel or Silvio Berlusconi basically fit thousands of cartoons that have appeared about them.

SPIEGEL: As National Security Advisor to President Jimmy Carter, you tried to prepare Americans for a more multipolar world -- one with a stronger China and a weaker US. Americans did not like that idea and Carter was voted out of office after one term.

Brzezinski: That concept is now very much a reality when you look at the rise of countries like China and India.

SPIEGEL: And the American decline. Are Americans aware of that trend or does the fate of Carter await President Barack Obama should he openly address the issue?

Brzezinski: I am very worried that most Americans are close to total ignorance about the world. They are ignorant. That is an unhealthy condition in a country in which foreign policy has to be endorsed by the people if it is to be pursued. And it makes it much more difficult for any president to pursue an intelligent policy that does justice to the complexity of the world.

SPIEGEL: Yet the American right is still convinced of American exceptionalism.

Brzezinski: That is a reaction to the inability of people to understand global complexity or important issues like American energy dependency. Therefore, they search for simplistic sources of comfort and clarity. And the people that they are now selecting to be, so to speak, the spokespersons of their anxieties are, in most cases, stunningly ignorant.

SPIEGEL: If you were still national security advisor, how would you tell President Barack Obama to react to WikiLeaks?

Brzezinski: To relax and to carry on. His basic instincts on the large issues of foreign policy are fundamentally correct and in tune with history,

SPIEGEL: Just his instincts? Not his policies?

Brzezinski: There is a lack of strategic implementation. Look at the standstill in the Middle East. The hesitation on Iran is another, and the absence of a kind of shared strategic perspective with the Europeans on Russia. To tackle this, it will require more of an effort to correct than if he had been more energetic and more committed to push forward with his world view shortly after the assumption of office. 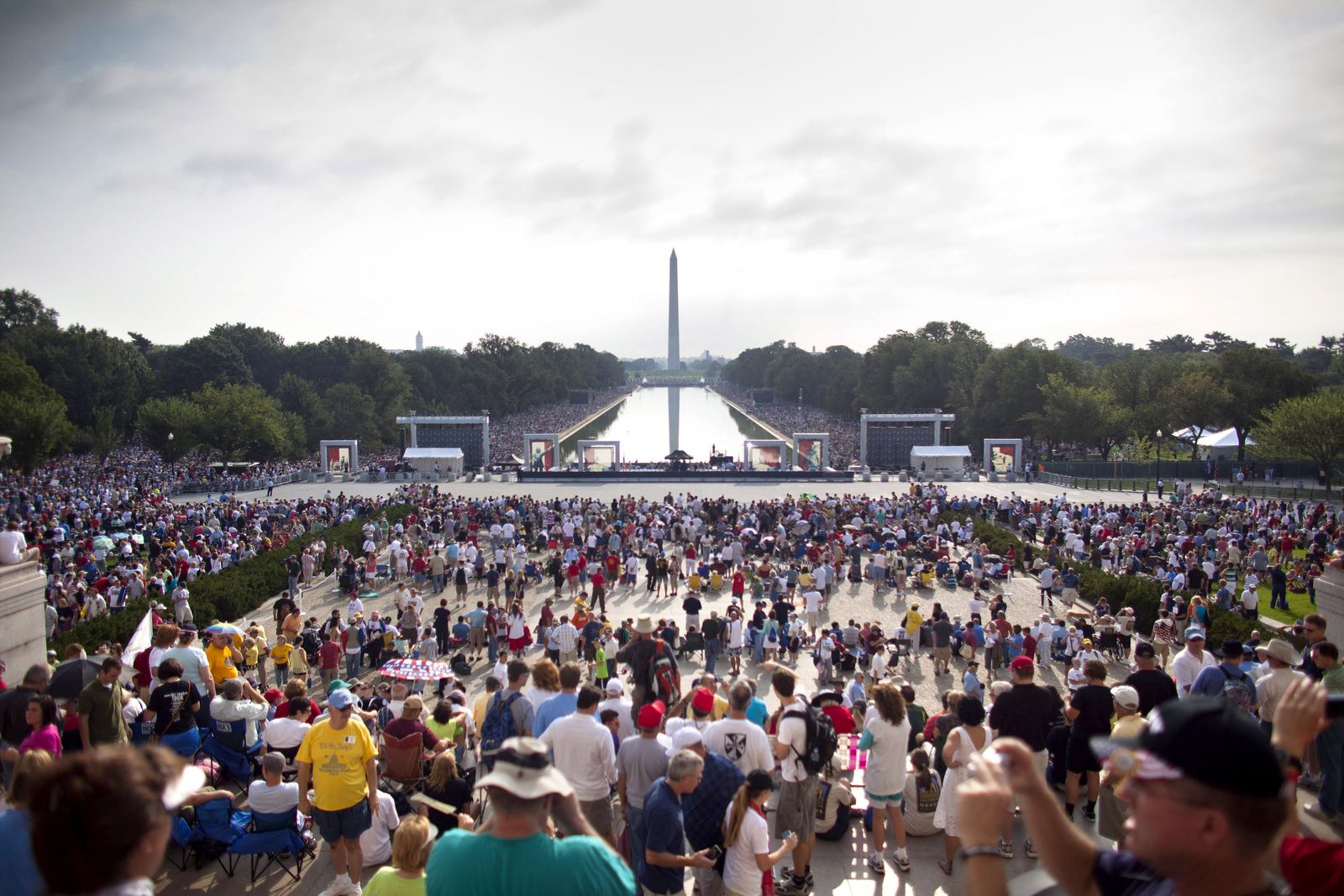 US Tea Party activists gathered on the steps of the Lincoln Memorial in Washington D.C. for a rally called "Restoring Honor," organized by conservative television personality Glenn Beck, in August.