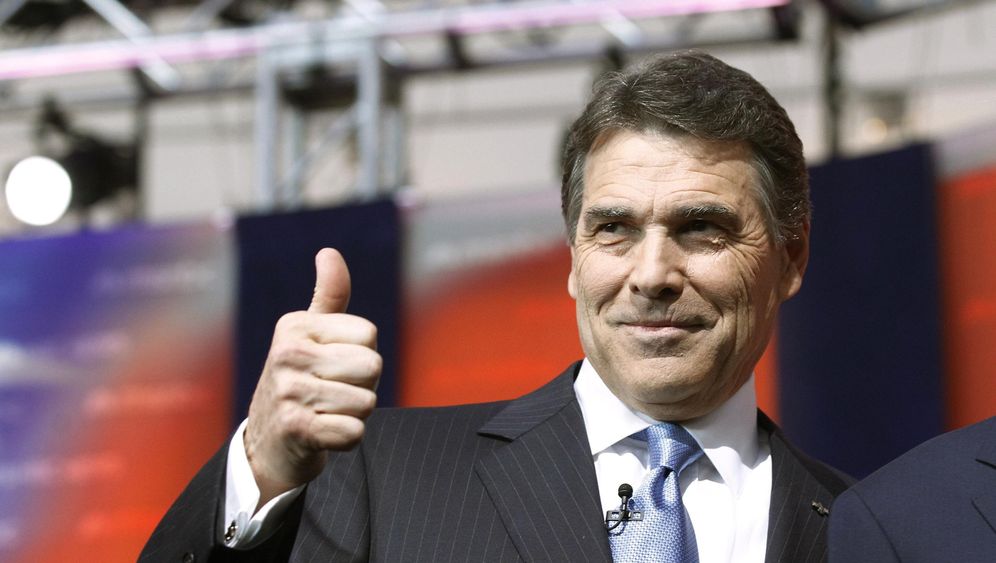 It's a gruesome record, but Rick Perry is proud of it. "Your state has executed 234 death-row inmates, more than any other governor in modern times," NBC's Brian Williams told the Texas governor during this week's presidential debate. Did he ever struggle to sleep at night, Williams continued, "with the idea that anyone of those might have been innocent"?

Before Williams had finished, the auditorium erupted in cheers, even whistles, as if the spectators welcomed this killer number. Then Perry answered grimly: "No sir, I never struggled with that at all." Asked what he made of the applause, he said: "I think Americans understand justice."

This bizarre moment was almost lost in the subsequent coverage of the Republican candidates' debate. For one man, however, it was a bad omen: Steven Michael Woods.

Woods, 31, is incarcerated in the Allan B. Polunsky Unit, which houses Texas' death row, a four-hour drive east of the capital Austin. His execution for capital murder is set for Tuesday -- one day after the next Republican debate. It would be the 19th execution this year in Texas alone.

There's more, though: Woods, his lawyers and his friends insist he is innocent.

There are indeed grave doubts about the verdict. Marcus Rhodes, Wood's co-defendant and a former friend, has admitted to the double murder in question and already been sentenced -- but to life in prison. Rhodes' DNA was found on the weapons, but not that of Woods.

Yet all courts so far have rejected Wood's appeals. Even the US Supreme Court refused to take up the case. Alex Calhoun, Wood's defense lawyer, has now filed a clemency petition with Governor Perry and the Texas Board of Pardons and Parole, as a last resort.

Woods was deprived of his constitutional rights and convicted based on "false or misleading testimony," Calhoun alleges in the 20-page petition to Perry. Furthermore, the prosecution had "illegally withheld significant evidence."

"I am sure that the Board of Pardons and Paroles will, using their judgment and innate sense of fairness, recognize the injustice and patent unfairness," Calhoun told SPIEGEL ONLINE. However, this sounds like overblown optimism: Since he took office in December 2000, Perry has not once shown clemency in a capital punishment case -- sometimes in spite of doubts. And it is highly unlikely that Woods would be the first person to get it.

Woods' story started as a horrifying criminal case. On May 2, 2001, two people were brutally murdered in a deserted field north of Dallas: Ronald Whitehead, 21, and Bethena Brosz, 19. Whitehead was shot in the head six times, Brosz twice as well as once in the knee. Both also had their throats cut. Whitehead's dead body was found hours later, Brosz was still alive but died 36 hours later in a hospital.

Whitehead was a drug dealer, Brosz a chance acquaintance. The 19-year-old planned to study astronomy. "Beth was just in the wrong place at the wrong time with the wrong people," her mother Janet Shires wrote on a memorial website. The suspects in the murders were tried separately. Woods, then 21, was sentenced to death in August 2002. Witnesses had claimed that he had bragged about the murders. His lawyers didn't dispute his presence at the murder scene but named Rhodes the killer.

Before Rhodes' trial could start in January of 2003, he confessed to killing Whitehead and Brosz alone -- without implicating Woods. In a plea deal, he was sentenced to life, not death.

For years Woods has tried to overturn his sentence -- unsuccessfully. Texas law is against him: Even if he had never pulled the trigger or swung the knives, he'd still be as guilty as the killer by his mere presence. In Texas that's called the Law of Parties.

The Polunsky Unit where Woods has been kept since is infamous for its terrible conditions. In 2004, dozens of death-row inmates went on hunger strike to protest their treatment, Woods among them.

'They're Killing the Wrong Person'

The courts weren't impressed. Even a broad coalition of activists for the abolition of the death penalty fighting for Woods hasn't been able to achieve anything. One of them is the Los Angeles student Tali Kaluski, 25. She learned about the case when she was asked to design and print t-shirts for Woods supporters. Woods thanked her in a letter. She visited him in jail in January.

"They're killing the wrong person," says Kaluski. "He's such a shy, quiet person." She says that Woods told her that he was in the car with Rhodes but had no idea then what he had planned. "How can a killer get life and Steven death?" she asks.

By now, the Office of Capital Writs (OCW), a state agency that represents death-row inmates in post-conviction habeas corpus and related proceedings, is working on the Woods case, too. OCW lead attorney Brad Levenson has filed another petition with the Supreme Court to review the verdict. On 44 pages he lists what went wrong during the trial and after. Woods' original lawyers had been "ineffective," the jury "prejudiced," the petition claims.

Insiders have little hope, as time is running out. "The concept of clemency in this red neck, peckerwood state is a hollow illusion, existing only for the sake of providing the appearance of due process," says one lawyer involved, who refuses to disclose his name for fear of angering the courts. "If history is any guide, I fear that Mr. Woods' case will be denied without a second thought."

Even the US media have shown little interest. Capital punishment is no longer a hot-button issue here. "The public is a lot more ambivalent than they had been, say 15 years ago," Richard Dieter, the executive director of the Death Penalty Information Center, which opposes capital punishment, told the Website Politico. "They see it as a grayer issue now."

Woods' execution is set for Tuesday, 6 p.m. local time. Tali Kaluski, who now calls herself Woods' "fiancee," is already in Livingston, at least to be closer to him in the final days.