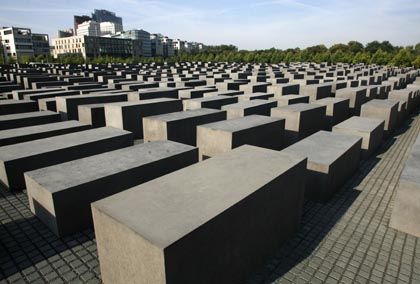 Berlin's Holocaust Memorial. Germany has said it is willing to negotiate on the issue of extra pension payments to Holocaust survivors.

Germany is showing the first signs of being willing to negotiate with Israel over the thorny issue of extra pension payments for Holocaust survivors.

German government spokesman Thomas Steg said Wednesday in Berlin that if Israel expressed a desire to talk about the issue, then Germany "will not refuse to hold such talks." However, Israel has not yet officially approached the German government over the pensions issue, he said.

German Foreign Ministry spokesman Martin Jäger confirmed Wednesday that Israel has not yet made an official approach over the matter. "Naturally we are ready, as we have done in the past, to discuss with our Israeli partner all questions relating to mutual interests," he said.

The two officials were responding to comments made by Israel's Minister for Pensioner Affairs Rafi Eitan, who raised the issue of Germany making additional pension payments to Holocaust survivors in various interviews last week. The statements by Steg and Jäger are the first signs that the German government is prepared to negotiate on the issue.

The pensions issue is currently covered by the Luxembourg Agreement on reparations for Holocaust survivors, which was negotiated between Germany, Israel and the Jewish Claims Conference in 1952.

Paying for Death and Suffering

The Luxembourg Agreement, however, failed to take into account the costs of caring for elderly survivors, who lived longer than expected, or the fact that so many additional survivors would come to Israel. "Nobody thought that 175,000 Holocaust refugees from the former Soviet Union would come to Israel," Eitan recently told the Israeli newspaper Haaretz. "That changed the entire picture, even if the Germans aren't interested." The Israeli state has ended up paying its Holocaust survivors almost five times the €1.5 billion it received from Germany for the purpose.

However, a spokeswoman for Eitan has said that the minister does not want to renegotiate the 1952 agreement. Instead, he wants Israel and Germany to discuss ways of finding funds to cover the costs which were overlooked when the original agreement was signed. Although Eitan's inititative has been criticized both in Germany and in Israel, the Israeli prime minister's office said this week that Eitan had the government's full support.

Eitan's spokeswoman recently said that the minister is hoping to speak to German Finance Minister Peer Steinbrück when he visits Israel at the end of November. However, Steinbrück's spokesman said last Friday that the finance minister had no plans to meet Eitan when he is in Israel.

There have been protests in Israel over the fact that around 80,000 Holocaust survivors live in poverty in the country today. Eitan's initiative is only one of several ongoing Israeli demands for more Holocaust-related compensation from Germany.