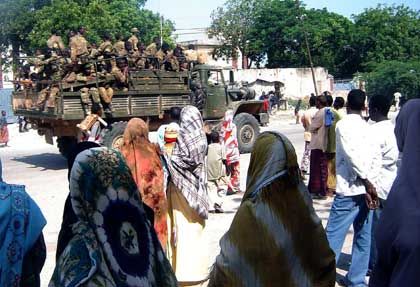 Somalis watch as government troops and Ethiopian forces enter Mogadishu, after Islamist forces fled the capital in December. A number of terror suspects were arrested and transferred to prisons in Ethiopia, where they were interrogated by US officials.

The CIA's system of unlawful kidnappings of terrorist suspects known as "extraordinary renditions" appears to have been extended to the Horn of Africa. New cases have emerged of the transfer of terror suspects to prisons in third countries, where they have been questioned and allegedly mistreated -- this time in East Africa. In total more than 100 terror suspects are thought to have been arrested in Somalia and Kenya and transferred to Ethiopia to face interrogation by US officials.

In the chaos of the Ethiopian operation in Somalia that began in December 2006, a number of men and women were arrested, including at least four Britons, two Swedish citizens and one Canadian.

Swedish citizen Munir Awad, 25, who was only released three weeks ago, told DER SPIEGEL that he had travelled with his 17-year-old girlfriend Safia Benaouda, also a Swedish citizen, to Mogadishu in December. He says that after the Ethiopian troops invaded they fled to Kenya, where they were arrested by local militia and US soldiers and sent to the Ethiopian capital Addis Ababa.

Awad claims that they were held on a military base and interrogated, sometimes for 12 hours at a time or longer, and were not given access to a lawyer. He says that they were accused by the Americans of being al-Qaida fighters. DNA samples were taken and they were questioned about Swedish Muslims. He says they were sometimes beaten or choked and only those who cooperated were allowed to sit or were given something to eat.

In a related case, the Sunday Times of London reported on Sunday that the 25-year-old British student Reza Afsharzadagen, who was among refugees forced to flee the battles in Somalia in December, was also arrested as a suspected al-Qaida member in Kenya and sent back to Somalia. He said he was handed over to Ethiopian soldiers but a British diplomat intervened and took him home. According to the newspaper, flight records show that 85 other prisoners were transferred to Ethiopia for interrogation, and that these included 11 women and 11 children.

The government in Washington confirmed to DER SPIEGEL that "in the past few months a number of prisoners have been questioned in Ethiopia." Up to 200 agents of the CIA and FBI are thought to be currently based in Addis Ababa.

The US government is apparently making sure that it is the Ethiopian authorities rather than US officials who are running the prisons in Addis Ababa. "They've concealed their role but you can assume the Americans were behind all these renditions," a senior western diplomat based in Kenya told the Sunday Times. "By sending prisoners to Ethiopia, they had a convenient place to interrogate people."

Somalia has been in a state of virtual anarchy since 1991 when warlords first overthrew the dictator Mohamed Siad Barre and then began fighting each other. The radical Union of Islamic Courts drove out the warlords from the capital in 2006 and ruled the city for six months but they in turn were driven out by Ethiopian forces who invaded in December, along with a small number of US special forces troops. The US suspected the Islamic Courts of harbouring international terrorists linked to al-Qaida, who were allegedly responsible for the 1998 bombings of the US embassies in Kenya and Tanzania.

The UN-recognized Somali government declared victory over the Islamic insurgents in the capital in April, but they are now fighting a new front against the militants in the semi-autonomous north east of the country.

Meanwhile last Friday, Council of Europe special investigator Dick Marty released his second report, saying he had "enough evidence to state" that the CIA had operated secret prisons in Poland and Romania. The illegal deportation of suspects by CIA kidnapping teams in Europe amounts to a "massive and systematic violation of human rights," the report says.