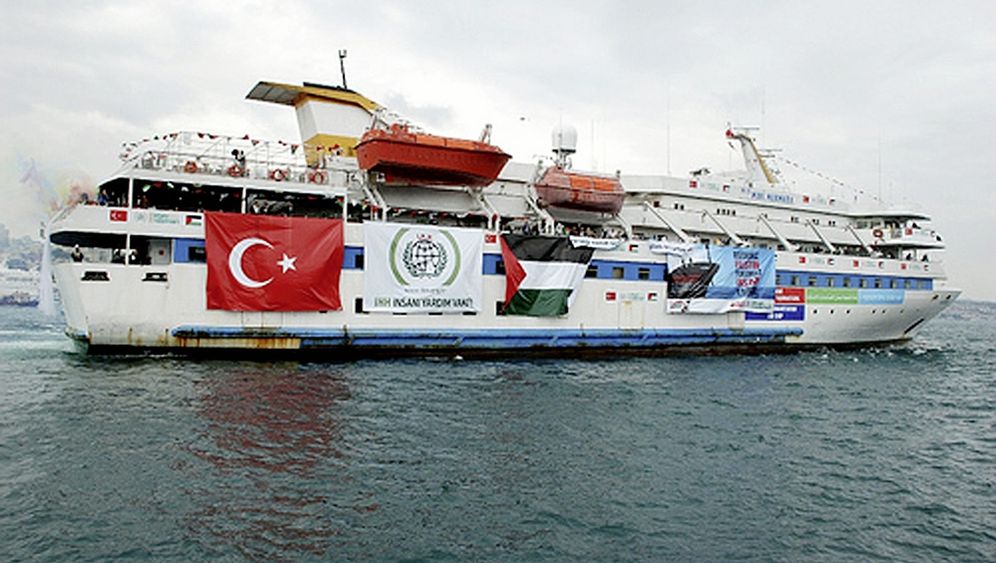 Photo Gallery: On Board the Mavi Marmara

When the Hamburg resident Nader El Sakka, 58, tried to board the Challenger I in the port of Agios Nikolaos on Crete, he was told he had to sign a four-page document pledging that he would not engage in violence and that he possessed no weapons. He also had to provide the name and telephone number of a family member in case of an emergency. If he didn't sign, he was told, he wouldn't be allowed on board the Gaza-bound convoy.

The document was in English, a language that El Sakka -- a businessman who was acting as a delegate from the Palestinian community in Germany -- does not speak well, so he only filled out three pages. He thought he could skip the fourth page. "But that wasn't enough to be allowed on board," he says. "They insisted that I also fill out the fourth one."

El Sakka embarked on board the Challenger I, one of eight boats and freighters headed for Gaza with a load of cement, structural steel, medicine and children's toys. Two days later, off the coast of Cyprus, El Sakka disembarked and went on board the Mavi Marmara, a Turkish passenger ship. The flagship of the small fleet, it had Gaza activists on board from a dozen countries, the majority of whom -- around 400 people -- hailed from Turkey.

El Sakka describes the atmosphere on board as "euphoric," almost as if "we were on a pleasant cruise," he says. The ship was linked via satellite with the Internet and a number of TV stations and continuously sent out images and interviews to the world. A reporter from the Arab news channel Al-Jazeera filed a report on Sunday afternoon that made headlines a number of days later. A group of Arab activists could be seen chanting: "Remember Khaibar, Khaibar, oh Jews! Muhammad's army is returning!"

This is an intifada battle cry, a fighting slogan that recalls a victorious battle fought by the Prophet Muhammad's army against the Jews. El Sakka, a veteran of many pro-Palestinian demonstrations, knows the words well -- and he disapproves of them. "We avoid such slogans at our rallies," he says. "I didn't personally see this group on the ship. But I recognize the reporter. He was definitely there." The other footage in the report also stems from the Mavi Marmara, he says -- including a woman standing on deck and saying in Arabic: "Right now we face one of two happy endings: either martyrdom or reaching Gaza."

That evening at 6:00 they ate köfte (grilled meatballs) and cucumber salad. Four-and-a-half hours later, Captain Mahmut Tural spotted Israeli ships on his radar. In response to their demand that he change course, he responded: "Negative. Our destination is Gaza." Then he ordered an exercise to prepare the passengers for an emergency.

'I Was Well Prepared'

"But right after the alarm the various groups continued with their speeches and singing," said Norman Paech, a former member of the German parliament, the Bundestag, for the far-left Left Party, who was also on board the ship. "I stayed for a bit on deck and observed it all -- out of anthropological interest." Then he went to bed.

The activists suspected that an attack was imminent. They began to assign watches on deck. One of the men on watch was the Turkish doctor Mahmut Coskun, 40. "They chose well-built doctors for the job, because in a crisis we would have to bring the injured below deck," he recalls. "I'm an emergency doctor with a motorcycle unit. I was well prepared."

He saw men preparing for a showdown by reciting poems and songs, but there were no real extremists on board, he says: "Between 5,000 and 6,000 people had applied for the mission. Radicals were not taken along."

At 4:02 a.m. morning prayers began, and the men went below deck to worship. A few minutes later, Israeli navy speedboats pulled up alongside the ship. The soldiers threw stun grenades and teargas grenades on deck.

El Sakka, who was standing on the upper deck, tried to take pictures with his digital camera, but he only dared extend his arm over the railing. "The noise on the lower decks was so loud that for a few minutes I didn't even realize that the first helicopter was already clattering just a few meters overhead."

He ran below deck to check on his friend Norman Paech, the former Bundestag member. Men who apparently had experience with teargas pressed pieces of onion into his hands. "'Rub it on your forehead,' they told me, 'it helps!'"

On the main deck, Canadian human rights activist Kevin Neish, 53, observed how the men prepared for battle. Some of them were wearing gas masks, one had "a kind of child's slingshot," while others had pieces of wood and metal pipes, he says. "It looked rather pitiful to me. Some of them had pulled things out of waste bins, wooden crates, batteries. Someone had even fished out a coconut."

The only video footage initially released of the military's Operation Sky Winds all came from the Israeli army. They showed soldiers rappelling from helicopters and being beaten down on deck by men armed with pipes and clubs. Towards the end of the week, details emerged from the films confiscated from the activists, including some that even surprised the Israelis. According to the newspaper Yediot Ahronot, one of the tapes shows an "Arab-looking woman" using a stick to keep men from beating up an Israeli soldier. Furthermore "a number of leftist European activists are trying to protect the soldiers."

Pictures that showed how eight Turkish activists and an American were killed had still not been released by the Israeli army by Friday evening. The soldiers shot indiscriminately into the crowd, Turkish activists said after they returned home. They acted in self-defense, said the army.

El Sakka fled to the lower deck when he noticed that live ammunition was being fired. The ship's sick bay was located next to the sleeping quarters. He observed that an increasing number of dead and wounded were being brought down, including three injured soldiers.

'They Should Have Sunk the Ship'

The shooting stopped after an hour, and a message came through the intercom that the ship was now under Israeli command. All passengers, including Sakka and Paech, were tied up and forced to kneel on the bloodstained upper deck. The ordeal lasted for four hours. Paech and two current Left Party members of the Bundestag, Inge Höger and Annette Groth, who were also on board, later filed complaints against persons unknown for unlawful detention and war crimes.

It took 10 hours for the Mavi Marmara to reach the port of Ashdod. Nearly all the activists were put in jail, but then the Israeli government decided to deport them all -- despite violent protests in Israel. "Do you know the only thing that the Israeli army did wrong?" said one demonstrator to an Israeli peace activist. "They should have sunk the ship and killed everyone on board!"