Regina Tauschek struggles to find the words to describe the situation in the Haitian capital Port-au-Prince. "The situation here ... yes ... you can not describe it," she told SPIEGEL ONLINE in a telephone interview Thursday. "The dead are lying in the streets, thousands of people are spending the night outdoors. They are lacking absolutely everything: water, food, medical care." 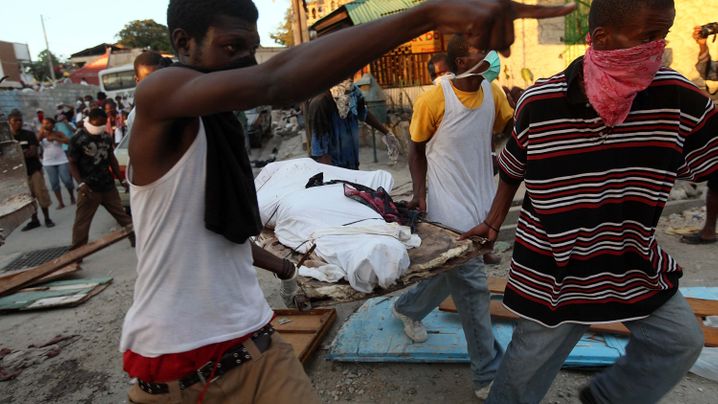 Tauschek, who is 43 and originally from Austria, has worked for humanitarian organizations for 12 years and has been working in Haiti for the German relief organization Welthungerhilfe since 2007. She has seen plenty of suffering over the years. But nothing, she says, compares to the situation in Port-au-Prince after Tuesday's devastating earthquake. "It is a real catastrophe," she says.

The quake took the desperately poor Caribbean nation completely by surprise. Tauschek was in her office when everything began to shake. "I just yelled: Get out of here!" she recalls. She has few possessions left apart from what she was wearing when the tremor struck. Her apartment at the city's Hotel Montana has been completely destroyed and she has been spending the nights in her car. She hasn't had much more than two hours' sleep since the earthquake.

In that respect, she is better off than many of the survivors. They have been left with nothing. The main streets of the capital have become large improvised camps where people spend the night. Haiti's government says that between 50,000 and 100,000 people may have died. According to the Red Cross, a total of around 3 million people have been injured or left homeless by the quake. Aerial photographs show landscapes that look like they have been bombed.

The international community has been quick to promise help. US President Barack Obama has pledged $100 million (€69 million) in aid. The World Bank and the International Monetary Fund have also each said they will provide $100 million in emergency funding.

Relief workers are on their way to Haiti from all around the globe. But many of them have little idea of what to expect when they arrive, given the chaos that reigns in Port-au-Prince. Communications in the city are still down.

Meanwhile residents are becoming increasingly desperate. "It's a race against time," says Tauschek. "People have nothing to eat, the looting is starting. At night, people sit in groups outside their houses to guard them, but they can not prevent all the attacks."

All hopes now rest on the international aid organizations, as the Haitian government has been completely overwhelmed by the situation. "We are only getting general calls for help," says Hans-Peter Debelius, who heads the office of the German Agency for Technical Cooperation (GTZ) in the neighboring Dominican Republic. "They say: Help us, help us. But they don't know exactly what is needed or where."

The coordination of relief supplies will be the biggest challenge in the coming days. Aid workers trying to distribute food may find themselves at risk. According to the United Nations, the main prison in Port-au-Prince has been destroyed. Some prisoners were buried by the rubble, while others have escaped. The UN's humanitarian chief John Holmes told reporters in New York that clean drinking water in particular "is going to be a major challenge." 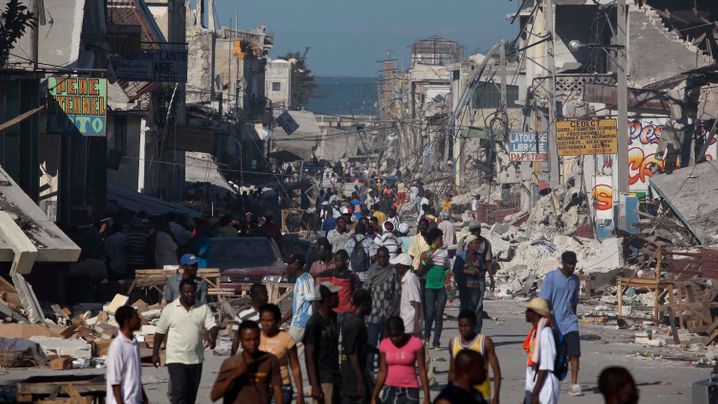 Photo Gallery: Chaos Amid the Rubble in Port-au-Prince

Tauschek said she was praying there would not be any riots. "I hope that the aid comes as soon as possible, that it is efficiently implemented and that people are patient." She was concerned about the dark clouds she could see in the sky. "Heavy rain would be the next disaster."

Like other aid workers on the ground, she herself is confronted with major problems. "We also need to make sure that we get food and drinking water for ourselves and that we have electricity, in order to be able to communicate at all." The current situation in the city was extremely chaotic, she said.

Many survivors are leaving Port-au-Prince for exactly that reason. Entire busloads of the injured are arriving in the Dominican Republic. The small hospital in the town of Jimani, which is near the border to Haiti, can barely cope with the influx.

The first trucks loaded with food and water have been setting out in the opposite direction in an attempt to provide the people of Haiti with their basic needs. The UN is supposed to be organizing the distribution of relief supplies and security, but the organization itself has been severely affected by the quake. Its head office in Port-au-Prince collapsed, killing at least 36 UN employees. Many more are still missing. As well as searching for survivors and coordinating relief efforts, the UN is responsible for keeping order on the streets of Port-au-Prince. Even before the disaster, that was a delicate task for UN peacekeeping troops.

"It's really very complicated," says a UN spokesman in New York. "No one can claim that the situation is currently under control. That is impossible at the moment."

The United States is sending 3,500 soldiers and around 2,000 marines to Haiti in a bid to stabilize the security situation. The American aircraft carrier USS Carl Vinson is also on its way, bringing additional helicopters for rescue work.

The earthquake victims are desperately waiting for the helpers to arrive. Germany's Welthungerhilfe has also sent an emergency team to Haiti. While Tauschek was talking on the phone, the team's plane was circling above the city, waiting for permission to land.

UN relief coordinator John Holmes told a news conference in New York that there was currently "a bit of a blockage" at the airport. Although the runway at the airport in Port-au-Prince was "fine," he said there were problems with the control tower, meaning it did not have its usual capacity. "People are working extremely hard to try to fix that. But it can't be fixed and it means, for example, that arriving in darkness is extremely difficult."

"It's total madness," says Tauschek. Then there is a hissing on the line as the connection to Haiti starts to break up. Tauschek has to hang up. There is still so much to do.