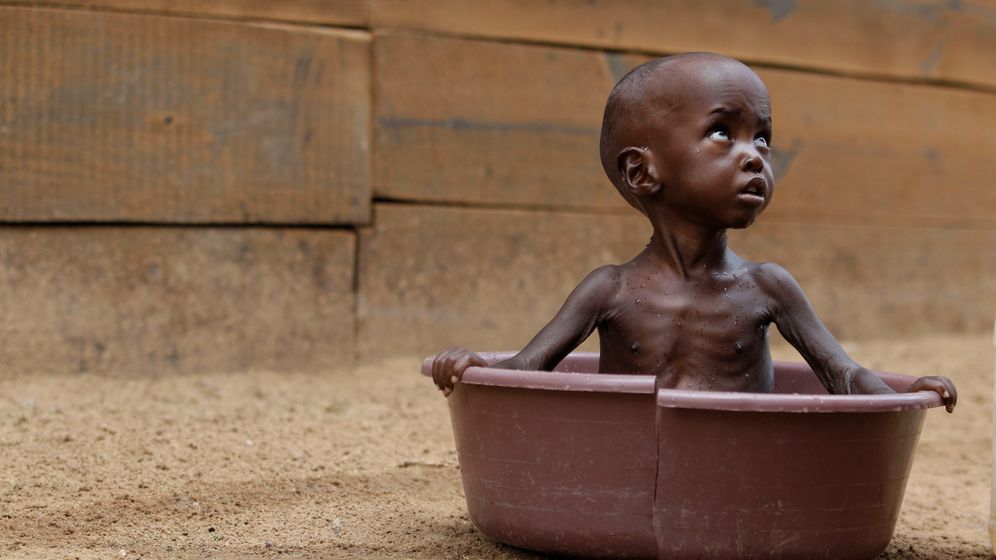 For a long time they hoped that the rain would begin falling after all. Only after their last animal wasted away and died did Batulo Mahmud give up and head out with her family. For four days and four nights Batulo marched southwards together with her husband and five children through Somalia's arid steppe. They had nothing to eat and only a little water with them.

They managed to drag themselves across the border into Kenya and finally they reached Dadaab, the largest refugee camp in the world. Exhausted, they cowered under a tarp and waited to be registered by the UN refugee organization UNHCR. "We used to have 100 goats and seven camels," Batulo said. Now, they have nothing. Ambia, her three-year-old daughter, is sleeping in the coarse dust of the steppe, flies crawling on her lips. Her parents no longer had the strength to wave them away.

Compared to others, Batulo and her family are doing well. Others arrive at the camp after weeks of walking, emaciated and with deeply sunken eyes. Many look as though only their skin is holding their bones together. Others die on the way.

The UN established the camp at Dadaab 20 years ago to house some 900,000 refugees from Somalia. Currently, there are some 380,000 Somalis living in the improvised tents among the bushes of the Savannah. Every day, some 1,000 more arrive. They stand in long lines waiting for water and they bury their dead at the edge of the camp under hastily dug earthen mounds. Many of the mounds are new.

Eastern Africa is baking under a merciless sun; the last two rainy seasons have brought no precipitation at all. It is said to be the worst drought since 1950. And hunger comes at its the heels. In Somalia, Ethiopia, Kenya, Djibouti, and Uganda, people are suffering like they haven't in a long while. The UN estimates that some 12 million people are already faced with hunger. And that is likely just the beginning.

There are many indications that the situation will only worsen in the coming weeks. For the moment, many of the regions in eastern Africa are classified by the UNHCR as "emergency" areas. But on Wednesday, the UNHCR declared famine in two regions in southern Somalia and said that it could spread unless enough donors can be found to help those in need. "If we don't act now, famine will spread to all eight regions of southern Somalia within two months," said Mark Bowden, humanitarian coordinator for Somalia.

It is a catastrophe that has been a long time in coming. Experts have been warning of the approaching famine for months and the causes are clear. They also know that the current disaster won't be the last. As a result of climate change, it has become increasingly the case that rainy seasons fail to materialize in the region. Adding to the problem, the population in the countries currently suffering has quadrupled in recent decades, from 41 million to 167 million. Plus, aid organizations tend to budget most of their money for emergency situations, leaving little left over for wells, fertilizer, seeds and efforts to teach farmers how to make the most from their plots of land -- all measures that could forestall the next disaster.

Somalia has been especially hard hit because the Islamists from the al-Shabab militia, who are fighting against the country's government, have chased almost all aid organizations out of the country. Hundreds of thousands of Somalis have also fled the violence, making the situation in the surrounding refugee camps even more difficult.

Stray Bullets and Nearby Explosions

"The people have no choice, they are even fleeing to Mogadishu," says Mari Honjo. A native of Japan, Honjo leads the office of the UN's World Food Programme in the Somali capital. Conditions in the city are hellish and for years it has been a battleground between Shabab militants and government troops.

Honjo's team is housed at the airport, a group of 19 foreigners guarded by a small unit of African Union peacekeepers. Despite the security detail, their headquarters are hardly secure. Stray bullets have been known to whistle through the camp and nearby explosions keep the aid workers on their toes.

They hardly ever leave their camp: The Shabab Islamists would take the foreigners hostage if they could. And they would shoot the heretics if they couldn't get close enough to kidnap them. Instead, the aid workers rely on a team of 145 Somalis to take care of the field work for them.

Despite the difficulties, the WFP has managed to more or less rebuild the harbor in recent years. Warships from the European Union anti-piracy mission Atalanta guide freighters full of aid supplies through the pirate infested waters and into the harbor. That is one of Honjo's office's primary responsibilities. "It is a challenge to work here," she says.

Currently, the WFP team is trying to feed 1.5 million mouths, most of them in Mogadishu itself -- for it is only here that the African Union artillery can open a path for the aid workers. The WFP withdrew completely in 2010 from those regions controlled by the Shabab militants. Employees kept getting killed or kidnapped, aid deliveries were stolen or the Islamists would extort money from workers. In the end, they managed to chase the "agents of the unbelievers" out of the areas they controlled.

Only now, as a result of the great drought, have they announced that aid organizations are once again welcome. "I think even they are desperate," Honjo says. But she still doesn't trust them. "The Shabab militias consist of numerous factions. They don't all share the same position. We need guarantees. We will have to wait and see."

An equally large problem is the phenomenon known in aid circles as "donor fatigue." People around the world are becoming tired of sending money to Africa, where nothing ever seems to change. Just last year, the WFP asked rich countries for $500 million to combat hunger on the Horn of Africa. They were unable to raise even half of that. And that despite the fact that the scientists working for the US-based Famine Early Warning System have long been warning that first the crops, then the animals and finally the people themselves would begin dying should the rainy season fail to materialize.

The second consecutive rainy season without a single drop of rain has just come to an end. The next one is set to begin in the autumn. Even if the rain begins to fall then, it would take months before farmers and nomads would be able to fill the markets with grain and meat. "From computer models, we know that this part of the continent is hit by more extreme events than other regions," says Daphne Wysham, a climate analyst at the Institute for Policy Studies in Washington, D.C. She calls the Horn of Africa the "epicenter of global warming." She says that additional periods of extreme drought are to be expected in coming years.

Making matters worse is the fact that food prices have shot up around the world, straining both aid organizations and the people themselves. The price for red millet, a grain which makes up a large part of the diet in Somalia, for example, has shot upward by 240 percent in the last year. Many can no longer afford it.

Of course people around the world have to step in to save those now suffering from the famine, says the German development expert Willi Dühnen. Based in Nairobi, he has for the last decade been monitoring the difficulties facing eastern Africa for the group Vétérinaires Sans Frontieres (VSF), particularly the tragedy of the nomads and their animal herds.

"The population has grown significantly, production has sunk dramatically, the climate is changing and many areas used for agriculture have been lost to the nomads," he says. The land, he says, can simply no longer feed the population.