The Moria refugee camp spills over the olive groves like a wildly growing city. Some 20,000 people live here. It's the largest such camp for migrants and refugees in Greece -- and in Europe -- with people spending the night in rickety tents or under stretched tarpaulins.

Hygienic conditions here are catastrophic: There's garbage everywhere and the stench is intolerable. Entire families occupy spaces no bigger than a few square meters and shelters are so densely packed that sometimes all it takes to start a deadly fire is a single spark. This week, a child was killed when part of the camp went up in flames.

Furthermore, thousands of people share a single sink in Moria and residents report sometimes having to queue for hours just to get something to eat.

In many European cities, people are doing all they can to avoid social contact. They're hoarding disinfectants and washing their hands every half hour. But people who have fled their homes and are still on the run don't have this luxury. The cramped conditions in the camps are the perfect breeding ground for diseases.

If there were an outbreak of the SARS-CoV-2 virus in one of Greece's refugee camps, it would be impossible to get it under control, warns Doctors Without Borders.

Fear of the virus is also spreading in other refugee camps. In neighboring Turkey, only a fraction of the roughly 4 million refugees live in camps, with most of them left to their own devices in cities. But the situation is growing more critical by the day on the Turkish-Greek border. Ever since Turkish President Recep Tayyip Erdogan announced two weeks ago that he would open the border to Europe, thousands of migrants have been waiting nearby, completely exposed to the elements.

Meanwhile, the southern Bangladesh town of Cox's Bazaar is home to one of the largest refugee camps in the world. In late summer 2017, hundreds of thousands of Rohingya, Myanmar's Muslim minority, took refuge there after being expelled from their homeland. Around 850,000 people still live there, roughly the population of the German city of Frankfurt, but squeezed into a space roughly one-tenth the size.

Refugees in Idlib are left entirely to their own devices.

There are only three confirmed cases of coronavirus in Bangladesh so far, all of which are in the north, far from the camps. But there's hardly an expert out there who expects things to stay that way. Bangladesh is one of the most densely populated countries in the world and its health system is already stretched thin.

Workers are thus doing all they can to prevent the virus from entering the camp. The World Health Organization (WHO) has distributed infrared thermometers at the airport near Cox's Bazaar and any newly arrived travelers are to be tested for fever. Hospitals in the vicinity have been equipped with additional protective clothing, while inside the camps, signs have been posted warning of COVID-19 and instructing inhabitants to wash their hands properly.

Visits Reduced to a Minimum

Similar measures have also been introduced in other camps. In Kenya, home to around 500,000 people from Somalia and South Sudan, the United Nations High Commissioner for Refugees (UNHCR) has sent out text messages asking people to report any corona symptoms as soon as possible. Checks have been stepped up at the entrances to the Kukuma and Dadaab camps. Anyone who wants to enter is now asked where they have been in the past few weeks.

"Even our staffers are only making the most necessary visits," says Eujin Byun, a UNHCR spokeswoman in Kenya. They are determined to prevent any foreigners from bringing the virus into the camp. Workers on home leave, therefore, were asked not to return to Kenya for the time being.

Because Kukuma and Dadaab have been around since the '90s, their infrastructures are better than in other camps. Many people there no longer live in tents, but in brick structures. There are hospitals and functioning water supplies. The UNHCR has increased its stockpiles of soap and plans to begin distributing it soon. "We still see the risk," says Byun. In Kenya, there has so far been one confirmed case of COVID-19.

The danger is even greater in areas where refugees are not officially integrated into the system and therefore aren't entitled to any medical assistance. Lebanon is estimated to have more than a million people who fled from Syria and there are informal tent cities, but no official state refugee camps. People who are ill often have to pay for their own treatment and the health system has been largely privatized. But how are the refugees supposed to pay? The living conditions of most Syrians in Lebanon are precarious at best. More than 70 percent are considered poor and live on less than $4 (3.64 euros) a day.

"Malnutrition makes people susceptible to disease anyway," says Jason Straziuso of the International Committee of the Red Cross (ICRC). "COVID-19 is therefore high on our radar."

It's not only the disease itself that worries aid workers. In many countries, refugees are already treated as unwelcome guests whom many people would like to see gone. An outbreak could intensify hostility against those people who already face mistreatment. "Panic and discrimination have never solved a crisis," warns UN Refugee Commissioner Filippo Grandi. He calls for "empathy for those who are most vulnerable."

'In a War, COVID-19 Isn't Your Biggest Concern'

The most vulnerable people at the moment are likely those who still live in Syria's Idlib region. There is virtually no medical infrastructure there and if the virus were to spread in Idlib, people would be left to fend for themselves. "I don't want to play down the danger," says the ICRC's Staziuso. "But when you're caught in a war, COVID-19 isn't your biggest concern."

Meanwhile, on the Greek island of Lesbos, Doctors Without Borders is calling for an evacuation of the Moria camp "before it's too late." The Greek government has other plans. People are now only allowed to leave the camp once an hour between 7 a.m. and 7 p.m. -- and only then in specially designated police buses. Soon, the Greek government will begin erecting a fence around the camp. If there's a COVID-19 outbreak, they intend to seal off the camp for two weeks. 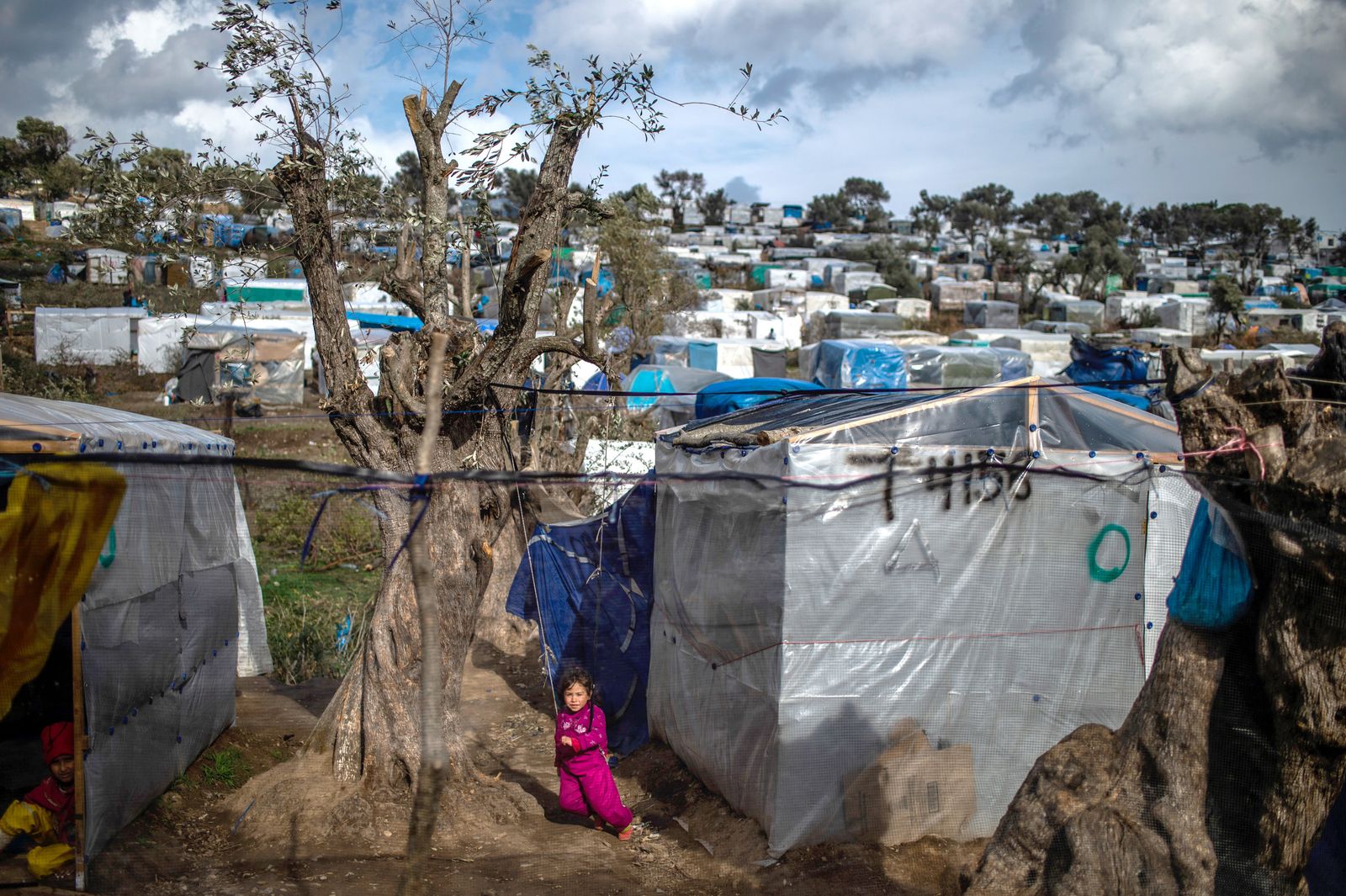 The Moria refugee camp on the Greek island of Lesbos 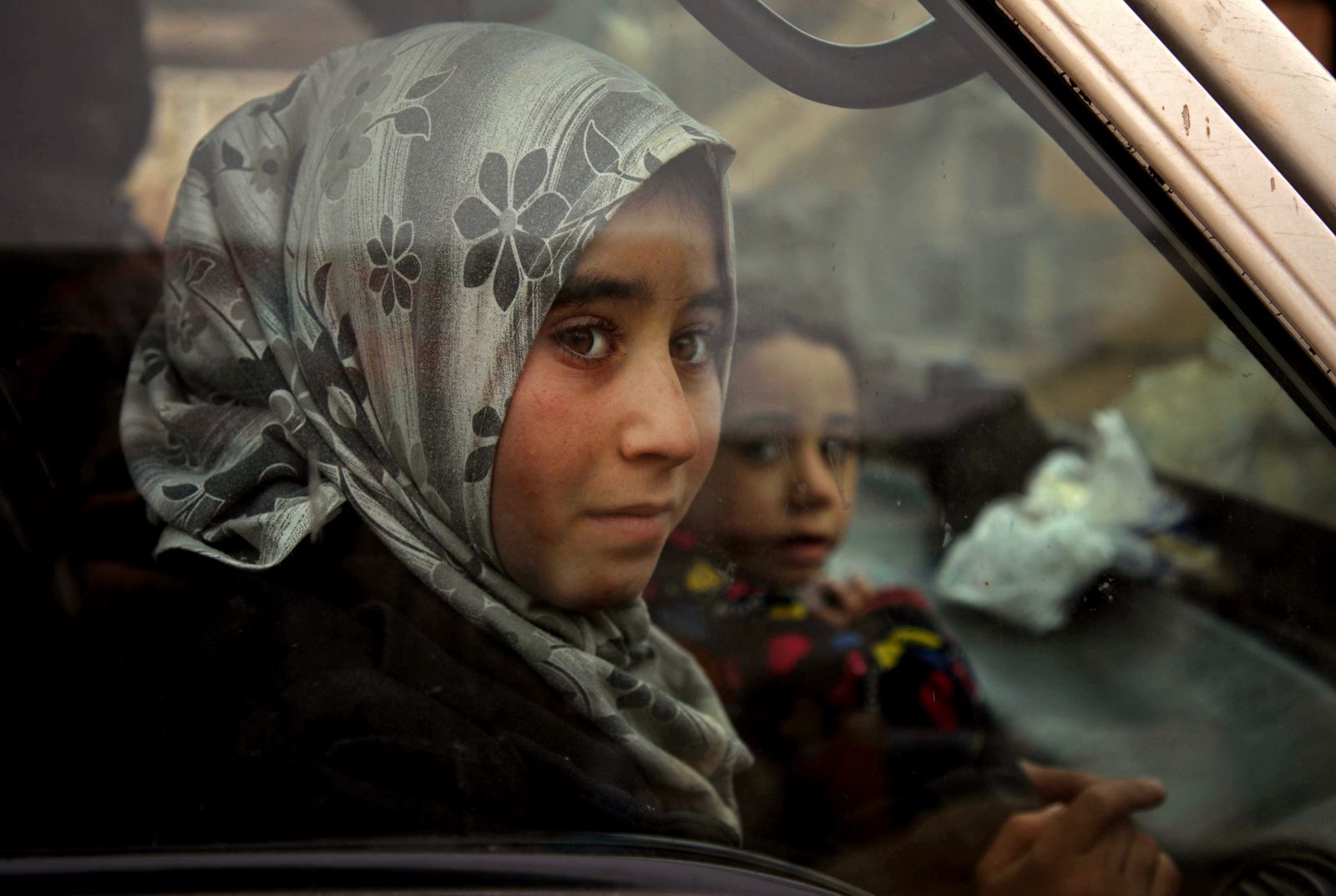 Refugees in Idlib are left entirely to their own devices.