The European Union's health chief urged people on Monday to avoid travelling to Mexico or the United States as the first suspected cases of swine flu were reported in Europe, heightening fears of a pandemic. The disease has killed 103 people in Mexico and spread to the US. 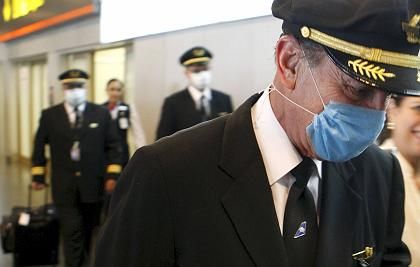 The crew of a plane that has arrived from Mexico wears face masks as they arrive at Madrid's Barajas airport on Monday.

"Personally, I'd try to avoid non-essential travel to the areas which are reported to be in the center (of the crisis)," Health Commissioner Androulla Vassiliou said in a statement recorded in Luxembourg and broadcast to reporters in Brussels.

Asked for details, she said: "They should avoid travelling to Mexico or the United States unless it's very urgent for them."

On Monday afternoon, the German Foreign Ministry warned against all non-essential travel to Mexico. In addition to Germany, France and Spain have also issued travel advisories.

The disease arrived in Europe as Spanish authorities said on Monday that a male patient had tested positive for the virus and 17 other people were under observation. The man was responding to medication and his infection wasn't life-threatening, Spanish Health Minister Trinidad Jimenez said.

Besides Mexico and Spain, there have been confirmed cases in the US and Canada. Suspected infections are being investigated in the United Kingdom, Brazil, Israel, Australia and New Zealand.

Financial markets worldwide have been hit by fears of a swine flu pandemic and governments are trying to coordinate response plans.

In Britain, health authorities in Manchester were carrying out tests on a suspected case of swine flu in a Canadian woman in the northern city of Manchester and on two Scottish tourists who had recently returned from Mexico.

The EU's travel warning is set to hit tourism in Mexico and the US.

TUI said other holiday trips to Mexico would continue to operate.

Most German travellers to Mexico visit the beach resorts of Cancun and Playa del Carmen on the Yucatan peninsula, where no cases of swine flu have been reported so far.

A spokeswoman for Thomas Cook said tourists booked on trips to Mexico are being offered trips to alternative destinations at no extra booking fee.

The number of suspected swine flu cases in Mexico climbed to 1,614 as of Sunday.