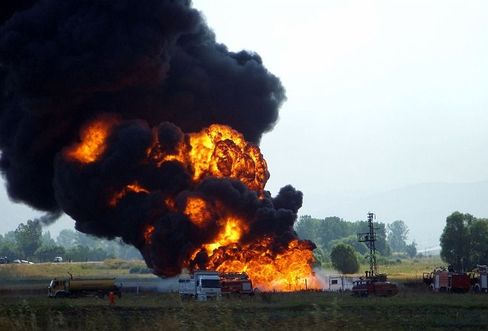 Kurdish separatists attacked the BTC pipeline near the eastern Turkish city of Erzincan on August 7. Will Russia attack the stretch of the pipeline that passes through Georgia?

SPIEGEL ONLINE: There are media reports about bombing attacks on the Baku-Tbilisi-Ceyhan (BTC) pipeline, which leads from Azerbaijan to Turkey via Georgia. It had already been shut down last week after a blast occurred in a pump at a section in eastern Turkey. Is the pipeline under attack?

Richard Morningstar: It is still very unclear whether any bombing has happened with regards to the pipeline. There is some evidence of a pattern of bombings near the pipeline, but we have not seen a confirmation so far. My understanding is that the BTC pipeline had been shut down because of the fire in Turkey and the smaller pipeline to Supsa, Georgia has been shut temporarily for security reasons.

SPIEGEL ONLINE: But some energy experts are concerned that the Russians may try to permanently damage the pipeline. Moscow was vehemently opposed to the project when you helped negotiate it in the 1990s.

Morningstar: There is certainly still frustration in Russia about the pipeline. When I helped negotiate it, the former Russian foreign minister Igor Ivanov told me: "We know you, and we do not like what you are doing." They were not pleased that the BTC bypassed Russia and secures a transport route for oil from Azerbaijan through Georgia to Turkey. That attitude has not really changed. But I think it is unlikely that the Russians will directly interfere with the pipeline. That would strain their relationship with the US even more.

SPIEGEL ONLINE : What else could they do?

Morningstar: Ongoing uncertainty and violence in Georgia would make things uncomfortable for the pipeline operators. It is also becoming clear that Russia is even more determined to have an assertive foreign policy and to use energy as political leverage with respect to its neighbors. Also, if the Russians were to attain a dominant influence in Georgia, they could interfere with the pipeline from an economic standpoint -- by raising transit fees, for instance.

SPIEGEL ONLINE: When you negotiated the BTC, you wanted to make sure that not all oil pipelines in that part of the world are based in rather unstable countries like Russia or Iran. But is Georgia still secure enough for oil transports?

Morningstar: The Russian actions in the past weeks underscore the argument that not all oil pipelines in the region should go through Russia. Russia should not have a direct stranglehold on oil resources. There are risks with the pipeline in Georgia, but it continues to be the best route for Western Caspian oil.

SPIEGEL ONLINE: The pipeline has been largely financed by major investors like BP. Do they share your assessment?

Morningstar: No doubt, the current events will create nervousness among investors. Operating in these areas is an adventure. But there are resources in the region that companies want to get out and they will deal with the current difficulties to get them out. By the way, it is certainly not less risky to invest in energy ventures in Russia than in the Caspian region.

SPIEGEL ONLINE: How could US and European policy be coordinated to make sure Russia cannot use energy to divide the two continents?

Morningstar: The events in the past week show how critical it is that the United States and Europe coordinate with respect to energy policy. They must work together to find alternative sources of energy, including alternative routes for gas and oil -- to make sure the dependence on Russia becomes less.