As Somali pirates continue to hamper seaborne trade off the Horn of Africa, France is calling on its EU partners to provide the funding, expertise and logistical assistance needed to train Somali forces to fight pirates based along the country's coastline. But Germany has its doubts as to whether such soldiers can be kept from joining the pirates or the numerous warlords ruling over the fractured country.

France broached the idea at a meeting of EU foreign and defense ministers in Brussels last week. According to the French plan, French soldiers would train around 500 Somali security forces in Djibouti, where France has its largest foreign military base. These soldiers would then go on to train 5,500 of their compatriots.

The call comes not long after a donors' conference organized by the European Union and UN in late April in Brussels, where international donors pledged more than $250 million (€178 million) to help strengthen Somali security forces in their fight against both pirates and militant Islamic forces.

Although German representatives backed the French plan in theory, they first want the EU to check on the plan's feasibility. Somalia has had no stable government since 1991, when warlords overthrew the country's long-time dictatorship, and the current government is threatened by Islamic militants and only has a firm grip over certain parts of Mogadishu, the capital city.

In particular, the German government is worried that the Somali government would be unable to pay its own security forces -- or even keep them under control. Likewise, German military forces worry that Somali forces trained and armed with EU-supplied weapons might cross over and join the pirates -- and further complicate the fight. They point to instances in Afghanistan where police officers trained by German forces have crossed over to enemy lines and to the fact that Somali soldiers already trained by EU forces have been accused of major crimes and human rights offenses.

As of Friday, pirates had attacked more than 80 ships in the Gulf of Aden in 2009 alone and hijacked 29 of them. In 2008, the International Maritime Bureau recorded 111 pirate attacks off the Horn of Africa, a dramatic increase over the previous year. 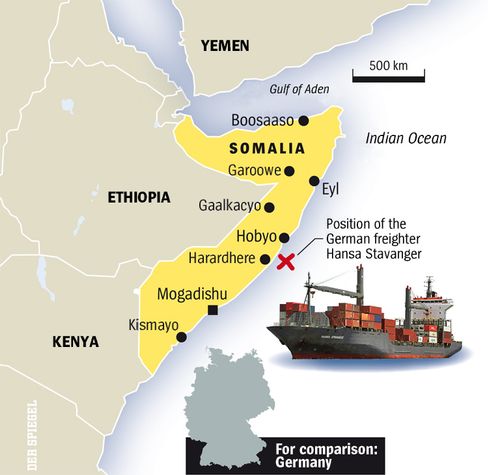 Pirates based mainly in the Puntland region of Somalia continue to hold more than a dozen vessels and several hundred crew members. Such hijackings are, as a rule, levereged into sizable ransoms with pirates bringing in an estimated $30 million in 2008 alone.

Over a dozen countries have dispatched ships to the waters off the Horn of Africa to help combat the pirates. The EU mission is also considering whether it should expand its naval anti-piracy operations to cover the Seychelles Islands in the Indian Ocean, where pirate activities have increased recently.

French President Nicolas Sarkozy has been particularly vocal about fighting piracy. On Tuesday, he will be in United Arab Emirates to inaugurate a new French naval base in Abu Dhabi, which is expected to help international efforts to combat piracy and safeguard key shipping lanes in the Persian Gulf.

Is A Coast Guard Enough?

What is being done with the ransom money the pirates collect is also of much concern to foreign governments. At an international piracy conference held last week in Kuala Lumpur, Malaysia, Abdul Wahid Mohamad, the director of Puntland's fisheries ministry, warned that the number of Somali pirates -- which he put at more than 1,000 -- was increasing in size and power. "There are growing indications that wealthier pirates ... may become new warlords and create extremist organizations," Mohamad said, according to the AP. He went on to urge the creation of a Somali coast guard "to prevent pirate boats before they go into deep sea."

Others have suggested that another way to combat piracy is to revive the country's fishing industry, which has been decimated by civil war and foreign trawlers illegally fishing Somali waters. "The answer is neither at sea or military but on land," Capt. Christophe Pipolo, a security adviser for France's Foreign Ministry, told conference attendees.

Yet another suggestion involves the ships targeted by the pirates themselves. Last Thursday, the head of Liberty Maritime Corp., a New York-based company whose ship was recently attacked by pirates while transporting humanitarian aid to Africa, urged the US Congress to either place armed personnel on US ships or loosen restrictions that prevent them from arming themselves. "In our view, small embarked security teams are a more effective deterrent than patrolling the entire million square miles of ocean that are affected," Philip Shapiro told the House of Representative's Transportation subcommittee, the AP reported.