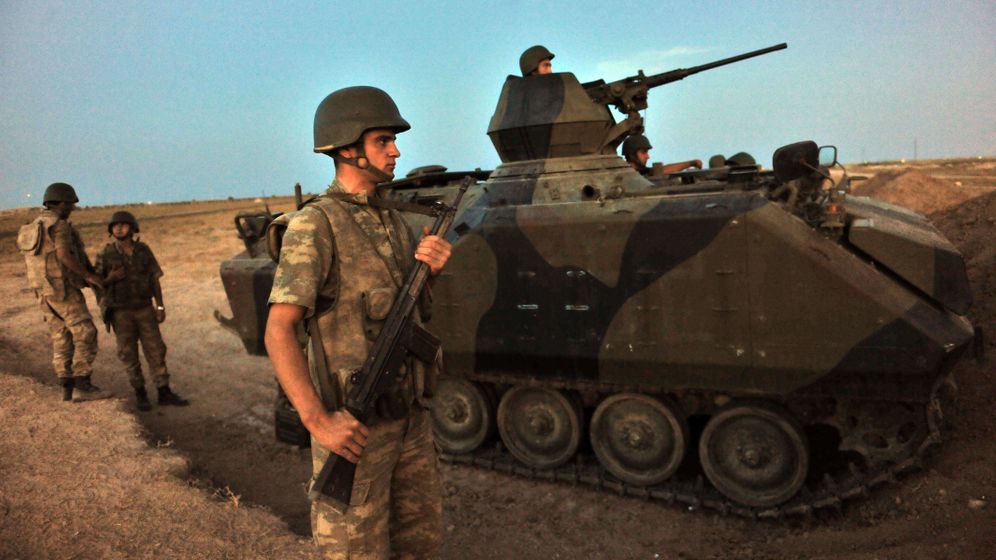 Events in recent days have illustrated just how quickly the violence in Syria could spiral into a regional war. After Syrian mortar bombs once again fell on Turkish soil, this time killing five civilians, Prime Minister Recep Tayyip Erdogan felt compelled to act. The Turkish military's retaliation on Wednesday and Thursday startled the international community.

With its actions, Turkey obviously proceeded with caution: It answered the repeated attacks from Syria with a few artillery shots -- not missiles. And the permission for further military action granted to Erdogan by his parliament is intended primarily as an intimidation measure. There is no apparent intent to declare all-out war -- at least for the time being. The United Nations Security Council, meanwhile, has strongly condemned the Syrian attack on Turkish soil and called on both sides to show restraint.

The fact of the matter is that the longer Syrian civil war continues, the more often incidents like that seen earlier this week will occur -- particularly in Turkey and Lebanon. A large part of the border region around Syria has already become a war zone. Previously, the international community had worried that a military intervention could fuel a regional wildfire, but now it is being forced to look on as this increasingly appears to be the reality -- without it ever even having gotten involved.

All of Syria's neighbors have already been affected by the civil war -- with the most dramatic impact on Turkey and Lebanon.

Dozens of civilians have been killed on Turkish soil by cross-border shelling and gunfire near the Turkish-Syrian border. Prime Minister Erdogan is under pressure from an increasingly angry population to respond to the violence seeping out of Syria.

In the western border region, tensions within Turkey are intensifying as well. Ankara is lending massive support to the Syrian rebels and has taken in around 100,000 Syrian refugees, angering the Alawites in the Turkish border province of Hatay. The region was part of Syria up until 1938 and has a similar sectarian diversity. There have been repeated protests by Alawites in Hatay against the Syrian rebels.

What Turkey finds especially unnerving is the support the government of President Bashar Assad lends to the militant Kurdistan Workers' Party (PKK). To avoid angering its northern neighbor, Damascus had long suppressed the cross-regional militant group's activities on Syrian soil. But since the deterioration of Turkish-Syrian relations, the PKK as been allowed to recruit and train members in Syria and initiate attacks against targets in Turkey.

In the last year and a half -- not coincidentally the length of the Syrian civil war -- PKK attacks in eastern Turkey have drastically increased in frequency. In the past, Ankara has responded to foreign PKK activity in Iraq with military strikes. It is thus highly plausible that Turkey would not shy away from taking the same action against the PKK in Syria. That is one reason why Turkey has been increasing its militarization of the border with Syria since July, when Damascus granted de facto autonomy to the Syrian Kurdish region.

Much of the population in parts of the Lebanese-Syrian border region has already fled. Almost daily, Syrian rockets and artillery are landing in Lebanon, destroying homes and killing civilians. Syrian government forces regularly cross the border and kidnap residents whom they believe to be supporting the rebels. The large number of Syrian refugees is also creating pressures for Lebanese society. Often enough, groups backing the Syrian regime in Lebanon have themselves kidnapped civilians they suspect of being Assad opponents. In addition, the war in Syria has fuelled the conflict in the northern Lebanese city of Tripoli between Assad supporters and opponents. There have already been dozens of casualties there this year alone. The BBC has reported that Hezbollah, which is closely tied to Assad, has already lost several of its fighters in the war in Syria.

Fear of an expansion of violence outside Syria is also growing in Israel. In the Golan Heights, which Israel has occupied since 1967, pro- and anti-Assad protests have become more common in recent weeks. Fighting in Syria is getting closer and closer to Israel, and several incidents of gunfire from Syria have been reported in the Israeli-occupied Golan Heights. The Israeli army on Wednesday evacuated tourists from the region after discovering armed individuals near the border.

The government in Baghdad, meanwhile, is nervous that the Syrian civil war could reignite its own internal armed conflict. The Assad government previously egged on fighting in Iraq by smuggling militant jihadis into the country and giving them a safe haven to retreat to in Syria. Out of fear that fighters from Syria would infiltrate the country, Iraq has been turning away all male Syrian refugees from its borders.

Last month, the Syrian-Jordanian border experienced an hour-long skirmish between Jordanian troops and pro-Assad soldiers after the latter fired on Jordanian territory. The closer the fighting on the Syrian side gets to Jordan, the more dangerous the border regions there become.

No neighbor of Syria is interested in getting dragged into war. All its provocations notwithstanding, the Assad regime is also taking pains to deter its neighbors from direct intervention. After inflammatory incidents like the most recent shelling on the Turkish border town or the shooting down of an unarmed Turkish surveillance plane in June, Syria has acted with policies of deescalation.

Still, the mutual saber-rattling and the growing violence along Syria's borders provide a clear warning: The danger of a regional war cannot be underestimated.