The film "Mustafa" depicts the inner life of a lonely chain smoker and a national hero -- and it has unleashed a furore in Turkey. Every day the protagonist smokes three packs of cigarettes, drinks one bottle of Raki and endless cups of Turkish coffee. He is an utter melancholic but he wins a war, creates a republic and revolutionizes a society. 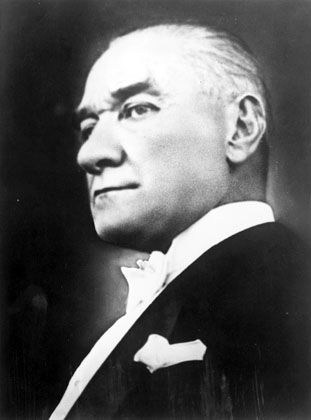 Mustafa Kemal Ataturk: the film shakes up the legacy of the father of modern Turkey.

In Turkey, it is unprecedented for anyone to get so near to Atatürk's real life. After all, this is the man whose portrait adorns banknotes and the walls of homes, who schoolchildren swear allegiance to every morning and whose image is before their eyes as they doze off at night. Mustafa Kemal Atatürk. To love and fear him is the most important civic duty for Turks.

Well-known filmmaker Can Dündar is breaking new ground and taboos by showing the dark side of the nation's father figure, even though it is laced with admiration -- and all this on the 70th anniversary of Atatürk's death. "Mustafa" has already attracted more than a half-million people. "After this film you won't look at an Atatürk statue the same way as before," enthused one viewer.

But for devout Kemalists, the film is a declaration of war. Voices like Deniz Baykal, who heads the opposition party CHP or Israfil Kumbasar, a columnist at the ultranationalistist daily Yeni Cag, are calling for a boycott. Critics accuse filmmaker Dündar of trivializing the legacy of Atatürk. They see it as an impossibility to portray the "Father of the Turks" as a drunkard and a man about town.

A particularly strong line has been taken by the diehard Atatürk supporters at the powerful Kemalist Thought Association, which sees the film as a front for a foreign conspiracy which aims to weaken the Turkish nation. "The collaborators of imperialism, the supporters of the Sharia and those pretending to be Republicans have been trying to demean Atatürk and destroy his revolution for years. But they will not succeed," it wrote in a statement from the organization's head office in Ankara to the local chapters.

Dündar's adversaries remain unconvinced by assurances that affection for Atatürk motivated him to make the film. For 15 years he scoured the archives to portray Mustafa simply "as a private person," he said. "The statues, busts and flags have all created a portrait of a leader without human qualities."

But the director is walking on thin ice: the personality cult is not only supported by the elite. It is also written into the constitution, which refers to Atatürk as the "immortal leader and unrivaled hero." Meanwhile, Paragraph 5816 is the "law concerning crimes committed against Atatürk."

Often, even the slightest departure from the public heroization of Atatürk is considered taboo. But to question the "historical achievements" of the man who founded modern Turkey is practically heresy. And there, the film remains silent.

On Monday, Turkish Defense Minister Vecdi Gönül showed that the seven-decade anniversary can also be celebrated in another way -- one perhaps more to the liking of the Kemalist Thought Association. At a ceremony at the Turkish embassy in Brussels, he gave a lecture on the difficult formation of the Turkish State and the expulsion of Greeks and Armenians, a fact which Gönül described as a "very important step." At the end of the day, he said, modern Turkey would not be as we know it, "if Greeks still lived on the Aegean and Armenians still lived in different parts of Turkey today."

In other words: the historical expulsion, deportation and extermination of the two population groups, as the thinking goes, are to be welcomed.

Between 1.5 and 2 million Anatolian Greeks were forced to leave their home in the process of the population changes. In return, half a million Greek Muslims came to Turkey. In 1955 another 100,000 Greeks left their home city of Istanbul following anti-Greek pogroms in a chapter of Turkish history which the once multicultural metropolis prefers to keep quiet about.

Later in the week, Gönül would correct himself, saying that Turkish minority groups, like the Armenians and the Greeks, enrich the country.

Still, Turkey's official writing of history reveals a deep reluctance to tackle the "disappearance" of the Armenians. While Armenian sources say 1.5 million Armenians died in massacres and death marches during World War I, Turkey speaks of deaths on both sides, claiming there were 300,000 Armenian victims at the very most.

Turkish politics professor Baskin Oran was well aware how strong Gönül's words sound beyond Turkish borders. "Because the Armenians and Greeks from Anatolia were sent away, industrialization was been delayed by at least 50 years," he said.

His colleague Dogu Ergil went a step further: "If the population of the Ottoman Empire had come to terms with its multiculturalism and many ethnicities, we would have long been part of the European Union. To govern such pluralism, a pluralistic democracy would have emerged."