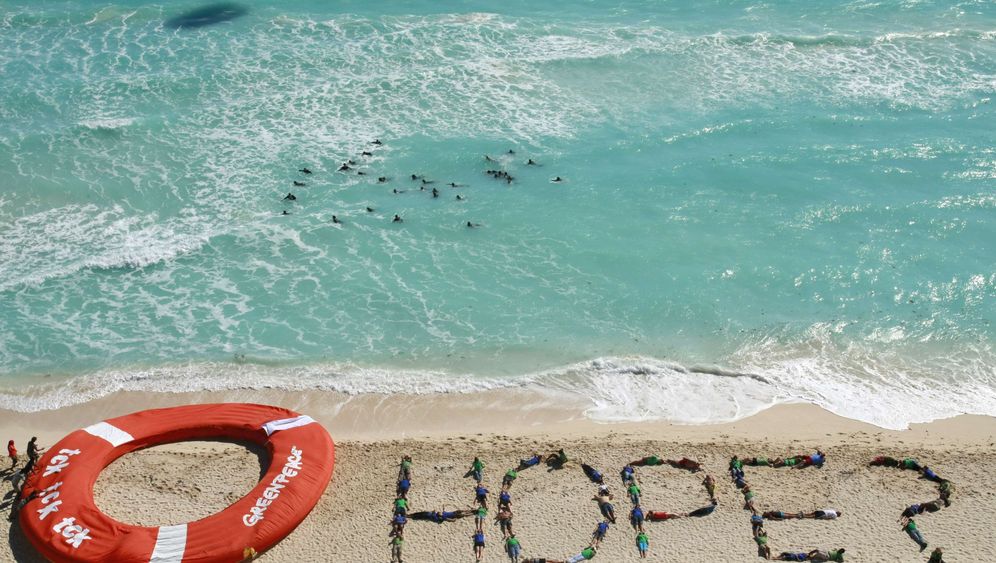 SPIEGEL ONLINE: Dr. Olson, you say you've figured out the most boring subject humanity has ever confronted: global warming. So I have to ask, I have studied the subject and ...

Randy Olson: OK, this is probably going to be the most boring interview I've ever done. And I probably shouldn't even do it because it's kind of a losing proposition, but I will because I think this issue of climate change is truly important, and that it is a major tragedy how poorly it's been handled.

SPIEGEL ONLINE: Wait -- you say our interview is a hopeless effort?

Olson: Not hopeless, just a long shot -- discussing how boring something is without being boring is tough.

SPIEGEL ONLINE: But before you became a filmmaker you were an environmental researcher. Did you find science to be torture?

Olson: Yes, I was a scientist. I know where the joy lies. It is wonderful finding a like-minded scientist and delving deep into the language that can only be understood by the handful of experts seated in the front row of your big talk. But good lord, it can be bo-ho-horing to the rest of the world. Make no mistake.

Olson: It's life versus non-life. I saw it my first year of college with Introductory Ecology, studying animal interactions (interesting) and systems ecology (zzz ...). The former involves living creatures (interesting) the latter involves mostly lifeless chemicals. Life is interesting. Non-life, not so much.

SPIEGEL ONLINE: Are you sure? Hardly any field of science has experienced as much attention in recent years as climate research.

Olson: It's kind of like how talking about the weather is generally regarded as the ultimate in boring conversation. Climate science is about temperature. Gee. How interesting.

SPIEGEL ONLINE: But think of the United Nation's Intergovernmental Panel on Climate Change (IPCC) or Al Gore's movie "An Inconvenient Truth" about the impending climate catastrophe -- the world media focused in on them, right?

Olson: The IPCC reports make headlines every few years, because the UN attracts the world's press. But the research itself? The Gore movie cashed in on his personality and the question of where he had been in the six years since his failed US presidential bid. The same movie starring any NASA scientist would have lost money.

SPIEGEL ONLINE: That's a bold claim, how can you be so sure?

Olson: Because the movie itself, stripped of its celebrity element, was boring. There was almost no narrative structure to it. It failed to tell an interesting and compelling story.

Olson: Maybe if you were one of the hardcore lefties who turned out for it in droves. But if it was so good, why don't you see it re-run on cable the way popular movies are?

Olson: It made a ton of money which made some people think that suddenly the topic was unboring. Which produced a spate of climate documentaries that were all boring, and eventually resulted in an Oscar-nominated documentary filmmaker friend saying to me they all blend together -- all the same shots of melting glaciers, polar bears, carbon emissions ... blah, blah, blah. By 2008 another friend was at a gathering of indy film distributors in which they were saying, "no more environmental documentaries!", there's no audience for them. And by 2010 a producer friend of mine said, "Even the Green Channel doesn't want "green programming."

SPIEGEL ONLINE: How could they have done a better job with "An Inconvenient Truth"?

Olson: They could have told an actual story that posed an interesting question then led us on a journey in search of the answer. It could have opened with a simple question -- "Why is it the world did such a good job addressing the first atmospheric crisis, the ozone hole, but failed to do the same for global warming?" THAT would have been the makings of a very good, inquisitive and probing documentary.

SPIEGEL ONLINE: What other errors have been made by the climate movement?

Olson: The second was having zero strategy to deal with an all-out assault on "the brand" by climate skeptics, culminating in 2009 with "Climate Gate" that spun circles around the climate crowd, as they had zero ability to do "damage control."

SPIEGEL ONLINE: How could the climate community have prevented the damage to its reputation?

Olson: By having a coherent, singular strategy worked out in advance. Corporations have singular heads called CEOs. The science world has no such coherence, cohesion or cooperation. It's a bunch of academics who were raised on the idea of communication being a frivolous add-on.

SPIEGEL ONLINE: Many scientists are not so negative about this. Asked about the communication problem, they are happy to refer to the fact that they answer questions openly at public talks, that occasionally journalists call and that some blogs generate many comments.

Olson: Climate definitely interests the climate crowd at some science magazines, talks or blogs. Some blogs are amazing. They will post one comment about one graph of temperature records from tree rings and get over a thousand comments. Which is boredom so purified and crystalized it's in an unadulterated form that could make even a robot want to commit suicide.

SPIEGEL ONLINE: How could the public possibly still be interested in climate research?

Olson: I fear it's too late and that the brand has been ruined, but I hope it's not. The climate crowd did a lousy job communicating. Several reports have itemized the fact that over a billion dollars was spent on climate by the environmental side over the past decade. There is simply no excuse for the failure to communicate.

SPIEGEL ONLINE: But many research institutes offer seminars on climate communication, are they useless?

Olson: Not entirely, but the problems are at a very deep and instinctive level. What is missing is the narrative instinct. What is needed is "Narrative Training" involving partnering with people from the more visceral end -- media people, professional storytellers, actors, etc. As I did with my new book -- partnering with two actors. But academics like to just keep to themselves in their ivory towers. And the boredom continues.