At first, it's just a handful of shoes, neatly stowed in white shelves by the entrance. But before long, the shelf is overflowing and dozens of shoes pile up on the floor: dress shoes, sneakers, hiking boots, construction boots, ladies' shoes, moon boots and pumps. The final count is more than a hundred pair.

Three little space heaters, plugged into wall outlets, are powerless against the icy cold creeping in from the street. Men kneel on the wall-to-wall carpeting, bundled up in winter coats but with only socks on their feet. A group of women hovers in the corner, some of them wrapped in long scarves. All face the same direction -- to the east. 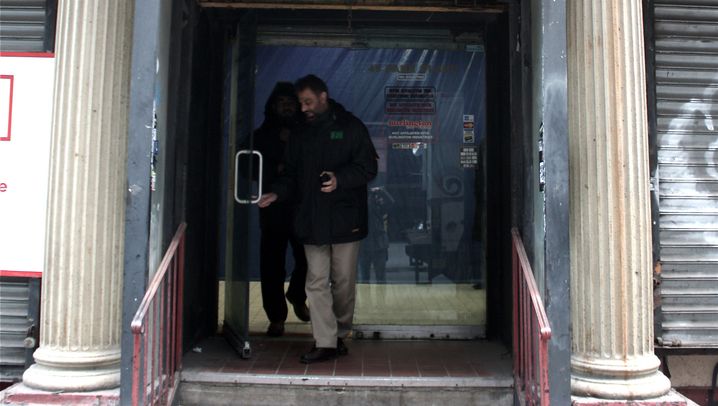 That's where the Imam is standing, note cards in hand, a tiny microphone clipped to his lapel. The men and women stand up, raise their hands on either side of their head, murmur "Allahu akhbar," bow and kneel again.

This is how it always starts, the Friday prayer held by Muslims worldwide -- even here in countless mosques hidden behind inconspicuous storefronts in the heart of Manhattan.

Right Around the Corner from Ground Zero

This particular makeshift prayer room, however, is a singular location. Just a few weeks old, it is right around the corner from Ground Zero.

The World Trade Centers used to stand just a few steps down the street. These days, it is a trauma-filled construction site -- where on Sept. 11, 2001, Islamist extremists murdered 2,751 people in the name of their understanding of Allah.

They began meeting here during lunch break toward the end of Ramadan, the Muslim month of fasting. The green-gray striped carpet and the old payphone out front are leftovers from the previous tenant, the Burlington Coat Factory. The glass doors still show the stickers of credit cards once accepted here: American Express, Mastercard, Visa, Discover.

Just a few years ago, it would have been unthinkable for Muslims to establish a makeshift mosque here, just a stone's throw away from Ground Zero.

"Only in New York City is this possible," Daisy Khan, executive director of the American Society for Muslim Advancement (ASMA), told SPIEGEL ONLINE. The ASMA has leased the new prayer space on Park Place. Her husband, Imam Feisal Abdul Rauf, is a prominent author, cleric and activist. He is also the spiritual leader of a Sufi community, which has its main mosque not far away in Tribeca.

Whereas some would ban minarets or headscarves, here in Manhattan -- at the Ground Zero of terror -- Muslims and Christians are trying to find a way to coexist. The downtown prayer hall -- an overflow room for the busy Tribeca mosque and the foundation for what may become an Islamic center for reconciliation -- sits between an Irish pub and an Amish market. The Museum of Jewish Heritage honoring the victims of the Holocaust is nearby. Around the corner is St. Peter's Church, New York's oldest Catholic place of worship.

"Allah most merciful, for whose forgiveness there is not a sin too large," intones the Imam in leading today's prayer. He wears a scarf wrapped around his coat and a dark suit underneath. The subway to Wall Street rumbles beneath the building, making the walls vibrate. Outside, pedestrians rush through the cold midday.

'The Hand of the Divine'

The history of this five-story building at 45 Park Place is closely tied to the events of Sept. 11, 2001. That morning, the landing gear of one of the planes which hit the towers crashed through the roof and through two sales floors. The store wasn't open yet, so nobody was hurt. Still, Burlington Coat Factory moved out. The building, built in 1923, has been empty ever since.

The owners, heirs of the New York Pomerantz family, finally sold it in July of this year for the ridiculously low sum of $4.85 million. It was bought by the real estate company Soho Properties, run by Muslims. One of the investors was Imam Feisal, who was looking to expand his congregation downtown to offer a prayer opportunity for those who work in the Financial District and only have a short lunch break.

This then morphed into a larger vision. Imam Feisal now plans to turn the building into a complete Islamic cultural center, including a mosque, a museum, "merchandising options," and room for seminars to reconcile religions, to counteract the backlash against Muslims in general and "to extend a hand," as his wife Daisy Khan says.

"It was almost obvious that something like this had to arise from the ashes of 9/11," says Khan. "In some way, this has the hand of the divine written over it. It's almost as if God wanted to be involved."

New York has the most diverse Muslim community in the world, after Mecca. While in other parts of the Western world Muslims have struggled with stereotyped prejudices and anti-Muslim since 9/11, here the harassment died down relatively quickly. New Yorkers, after all, are familiar with their Muslim compatriots -- they're part of what makes this city tick. "We're bankers, cab drivers, street vendors," says Khan.

The project has found support from the city. "We as New York Muslims have as much of a commitment to rebuilding New York as anybody," the mayor's director of the Office of Immigrant Affairs, Fatima Shama, who is Muslim herself, told the New York Times. Lynn Rasic, a spokeswoman for the 9/11 Memorial, said, "the idea of a cultural center that strengthens ties between Muslims and people of all faiths and backgrounds is positive."

Imam Feisal, who was born in Egypt, is well-known here for his moderate voice. He has preached tolerance and freedom of religion, criticized fanatism and bigotry, and is even accepted by Jewish communities. "He subscribes to my credo," Rabbi Arthur Schneier, the leader of the Park East Synagogue, told the Times. "Live and let live."

The building on Park Place still isn't much more than a shell. From the outside, one would never know that, behind the graffiti-sprayed iron shutters, Muslims are praying to Allah. Streaks of rust run down the facade. The paint is peeling off. The crooked company logo of the Burlington Coat Factory still dangles over the entryway. A sign advertises, "Retail space for lease."

Inside, in the fluorescent-lit prayer room with its bare walls, dust collects everywhere. Yet the space quickly fills with believers -- young and old, Arabs, Asians, Indians, African-Americans. They come in blue jeans or nice suits, in woolen coats or puffy winter jackets. Some look like they work on Wall Street. Some look poor.

"It is great to have this option," says a doorman who made his way across Ground Zero from the World Financial Center. "This way I don't miss my Friday prayer."

"We're going to be a model community of excellence," says Sharif El-Gamal, the young-looking chairman and chief executive of Soho Properties, who came for the prayer. "This space could be a symbol that what happened on Sept. 11 is not associated with Muslims in general."

This day's prayer is led by Imam Faiz Khan, a physician from Long Island, who is filling in for the traveling Imam Feisal. "This has such wonderful potential," he marvels. "New York can be a place of healing."

In his sermon Khan talks about forgiveness and redemption and the dangers of religious fanatism. He warns of the "contamination" brought on by "sabotage, pride, vanity, egotism" and other character shortcomings. "There is no such thing as fighting over religion," he says. "We have respect for all creation," including "Jews, Christians and Muslims."

After about 40 minutes they finish. The men and women exit and immediately blend in to the streetscape of Manhattan. The shelf with the shoes empties. Just 100 yards away, construction cranes rattle. From the hole that is Ground Zero gigantic steel beams have begun to rise -- the first floors of the new World Trade Center.