DER SPIEGEL: The sky over California is reddish brown. An army of nearly 20,000 firefighters has been battling against wildfires that have already charred over 3 million acres, destroyed over 6,000 houses and driven thousands of residents to flee. How could this happen?

Pyne: California is built to burn, to burn explosively. That is a condition of its physical geography. And then we have decided to meet that implacable force with another one, a society that wants to live there -- and how it chooses to do so. We have relied on firefighting agencies to stand between those two forces. And I think they are reaching the point that they cannot do that.

DER SPIEGEL: Were the fires triggered by climate change?

Pyne: Climate change is one factor among many others; it acts as a performance enhancer for fires. This is the fourth year of serial conflagrations. and that is quite remarkable. California would have a bad year and then five or seven or 10 years would pass. Now, we're four years running and there's no reason to think it's going to end.

DER SPIEGEL: Can the cooling off in the fall calm the situation?

Pyne: No, the dry katabatic winds like the Santa Ana and the Diablo, especially, increase the wildfire risk, and the wind season is just beginning. The losses could double before the calendar year ends.

DER SPIEGEL: Even without climate change, California would be burning just as badly as it does now, Danish academic Bjørn Lomborg recently wrote in an editorial. Much bigger wildfires than today were already raging over a hundred years ago.

Pyne: No, it’s nonsense, to dismiss climate change, of course it plays a role as a performance enhancer. It is true, especially in the 19th century, there was a whole wave of huge mega fires, which often claimed many more lives than today. But at that time, the driving force was the new railroad lines, which opened up the land and triggered a wave of settlement, accompanied by the immense load of debris or slash left by land-clearing and logging. Sometimes more than 400 people died in a single fire. This phase continued into the 1930s. Since then, those conditions have passed and wildland fire fighting has been professionalized and expanded, and California is probably the world leader in this field. So, it looked like the problem was solved, but it wasn't. There are many reasons for this, including the fact that California’s wildfire season now lasts over a month longer than it did then.

Beach goers enjoy St. Andrews State Park in Florida with smoke from controlled fires on the horizon in March 2016.

DER SPIEGEL: President Trump remarked that the fire crisis could have been averted by simply "cleaning your floors” and clearing out some trees and dead underbrush that can act as fuel for a fire.

Pyne: That is not wholly wrong. But even if we improve the forest, we're going to be dealing with a worsening climate. In the current political situation, the fires are being misused to redirect to a political agenda. For some, it is all about climate change, for others it is all about logging more. But the issue is much more complex. We are all gathering around the fire, so to speak, everyone is commenting on it, but they all have their backs to the flames. Many people are just using the fire to animate some other message for their particular group. And that does nothing to solve the fire problem. What we need is for everybody to turn around, look at the flames.

DER SPIEGEL: Would it make sense to start regularly controlled fires to reduce the dry biomass, as is done in Florida, for example?

Pyne: Yes, prescribed burning makes sense. Florida has a culture of burning that was never extinguished because of ranchers and a lot of favorable conditions. They don't have mountains. They don't have Santa Ana winds. They don't have the concentration of people in the interior. In fact, the saying was Florida burned twice a year because they would burn the same place more than once. So, the state forester of Florida once declared that 100 and 115 percent of the state had burned last year. In California, on the other hand, there are many mountainous regions, there are these strong Santa Ana winds, and many people live inland, in the Central Valley, in the Los Angeles basin, where the air quality is notoriously bad, even without fires. And now we're going to put millions or tens of millions of acres to deliberate burning?

DER SPIEGEL: If prescribed fires can prevent the big conflagrations, where does the strong aversion come from?

Pyne: A very important impulse came from Europe. Bernhard Eduard Fernow, a Prussian forestry official who married an American, came to the United States in 1876, and was soon naturalized. He headed the Bureau of Forestry, which was a small agency in the Department of Agriculture. When America’s National Forests were actually transferred to its jurisdiction, it was renamed the Forest Service and headed by Gifford Pinchot, an American who trained in forestry in Europe. But Fernow also brought with him his Central European convictions. The problem was that the place he grew up in is a temperate climate. It's very unusual in the world because it does not have wet and dry periods regularly. So, the only fires that occur in your part of the world are ones set by people. So, fire was seen as a social problem, a problem of social order and disorder. Fernow looked at the American fire scene and declared that it was all a problem of "bad habits and loose morals.” Well, that’s a great phrase. But it was totally inappropriate.

DER SPIEGEL: But Fernow is celebrated in America as a pioneer of forestry science.

Pyne: Yes, he and his colleagues were smart, committed people, but they had no sense of how fire actually functioned outside of Europe. He didn't understand the ecological role of fire. Many Europeans regarded landscape as a kind of garden and contained fire by intensive cultivation. There's a tradition in European agronomy that really dislikes fire because it's messy. Potentially dangerous. It seems irrational. And there was a very clear distinction made by the 18th century that if you use fire, you are primitive. But in many regions of the world, fire simply belongs to the landscape. And relying exclusively on keeping fire out of the landscape does not work in the long run.

Firefighters battle a blaze on the North Rim near Grand Canyon National Park in Arizona in 2006.

DER SPIEGEL: How did you become a fire historian?

Pyne: When I started, the subject didn’t exist yet. It began for me when I was 18, just out of high school, and I worked as a firefighter on the north rim of the Grand Canyon. A lot of people did it for two years. Very few people did it for three. I did it for 15, moving between the wildfire season and the university. I didn't see any reason why I should not continue as long as I went to graduate school and the rest of it. We were a small team that did initial attack (the initial response to a wildfire). At that time, our biggest forest fires were perhaps 300 acres (about 200 soccer fields). That's ridiculously small by today’s standards. Most forest fires were triggered quite naturally by lightning. The part of firefighting I enjoyed most was what is called "size up.” It's when you first reach the fire and you have to make quick judgments. There would be two of us. Can we contain this fire? Do we need to call for some retardant? Do we need reinforcements? If so, what kind? If we can't contain the fire, where do we stop it next? Where do we make a stand?

DER SPIEGEL: How did that shape your thinking?

Pyne: We developed a very close relationship with fire as part of the landscape: How will it behave? We often sat around the campfire at night and talked endlessly about fire. But what I learned was there was a kind of relationship with fire. And I learned to talk about fires the way most ordinary people would not. You know, there were really sweet fires. There were miserable fires. This was a fun fire. This was a real gut-wrenching fire. You know, this one just kicked us up and down the hill for a week. We were quite isolated at the rim, although there were many tourists and accommodations. It may be hard for people today to appreciate our isolation. We had newspapers that were two or three days old. We certainly had no television. We had no Internet. We had no private phones. It was a great life. Who cared? I learned about the lunar landing in 1969 from Time magazine, which I read days later.

DER SPIEGEL: The coronavirus pandemic is often compared to a forest fire. Is that an apt metaphor?

Pyne: Yes. Maybe this metaphor even works the other way around: To me, Fire is the other contagion. Wildfires can be described as a kind of infection! But fire is a lot like a virus. It's not alive, but it depends on the living world to spread. And if we start controlled fires to prevent bad fires with good fire, it is similar to an annual flu shot or herd immunity. And then how do we respond to it? Well, you are wearing masks that protect against ember spread. Social distancing. Well, that's like defensible space. Unfortunately, fire research is dominated by physicists and chemists, and we would need biologists to study how fire behaves in an ecosystem -- and how to contain fire with ecological interventions. The corona epidemic can help to find a new language to talk about fire.

DER SPIEGEL: How can Californians prepare for future wildfire seasons?

Pyne: There are a variety of relatively simple interventions. For example, we urgently need to think about where to build houses and how we build them to withstand a blizzard of sparks that blow through. Some of these communities are built in the fire equivalent of a flood zone. There may be a place for some prescribed grazing in places. In some forests, critical fuels and biomass should be reduced. One ecological way to do this would be through prescribed burning.

DER SPIEGEL: In California, power lines repeatedly set fire to the landscape. What is the reason for this?

Pyne: The grid is 100 years old in many places in California. Much of the problem is just defective equipment that needs to be upgraded. The other issue is high winds that can cause lines to spark or fail -- exactly under conditions that favor rapid fire spread. This problem is also an opportunity because we need to remake our power grid anyway. There are some places where putting them underground would be appropriate where you have power lines upwind of communities. There are other ways to control the power surges without turning it off. And here's where a turn to renewables, solar and others would be helpful because you can afford to turn off the long-range transmission and rely on locally generated power.

What happens in California affects everybody else. So, I'm really hoping that California can begin reforming. We can do a lot; we are not helpless. 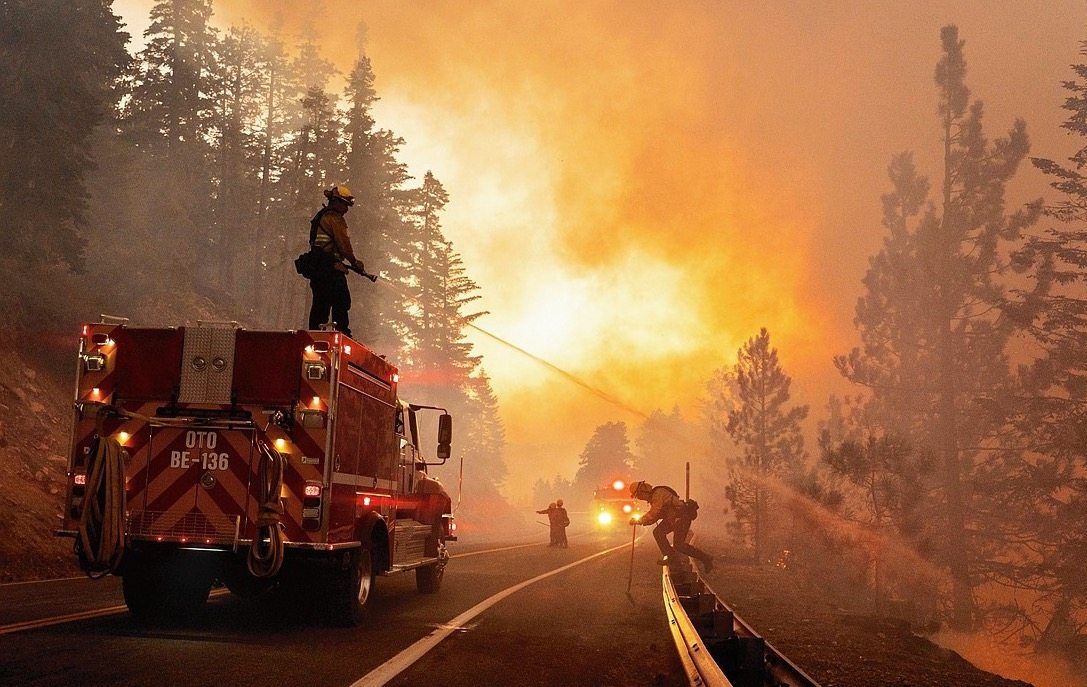 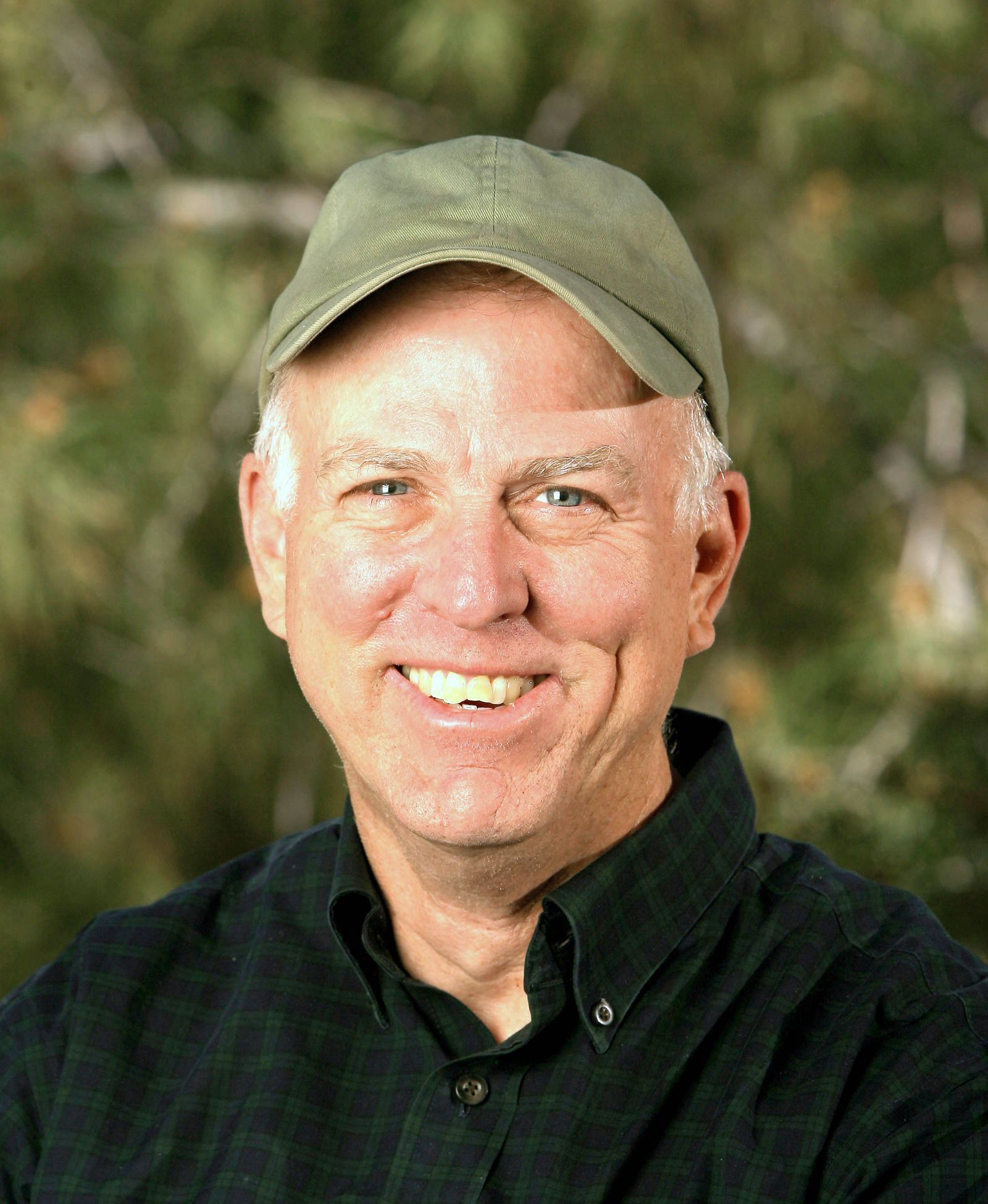 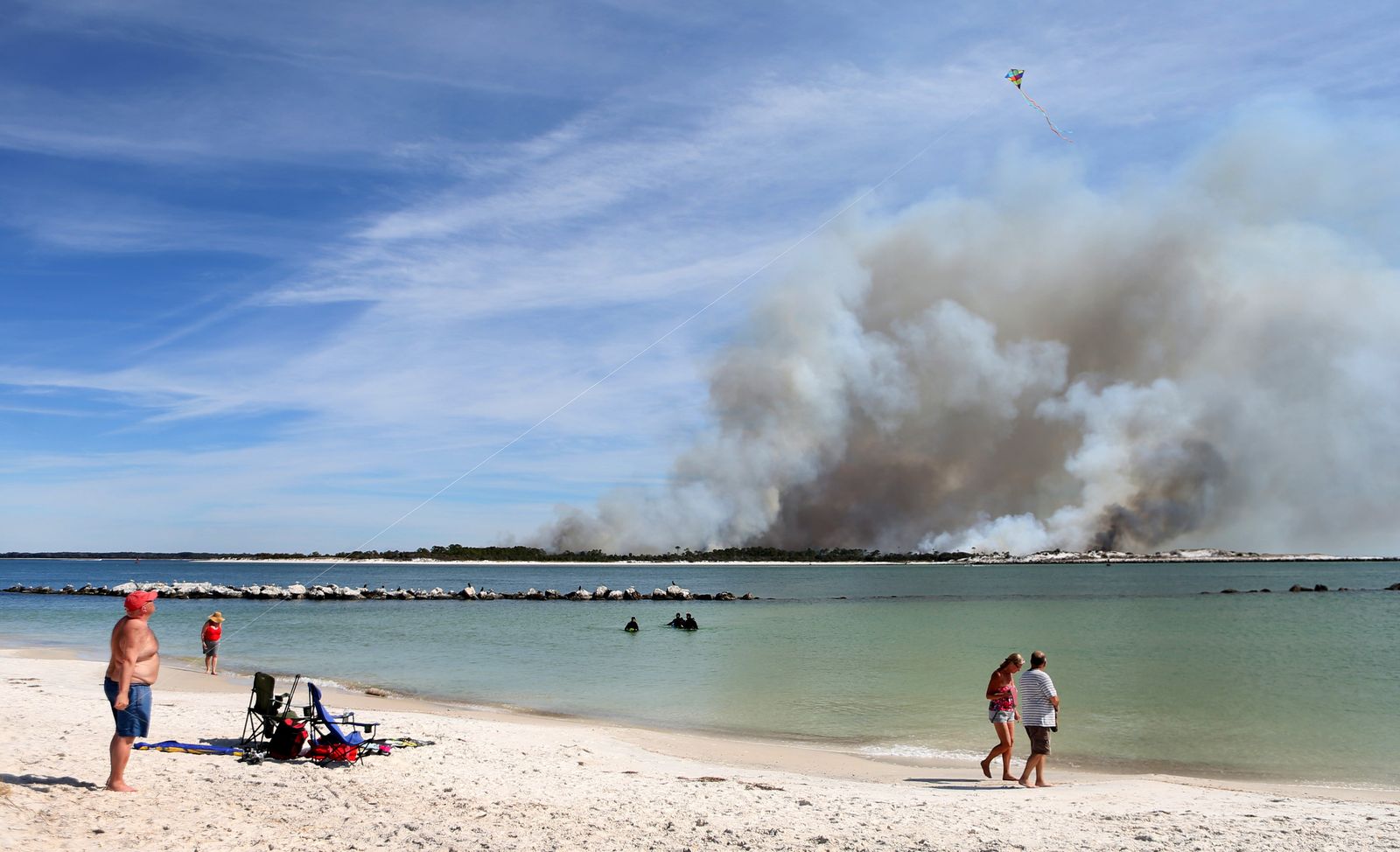 Beach goers enjoy St. Andrews State Park in Florida with smoke from controlled fires on the horizon in March 2016. 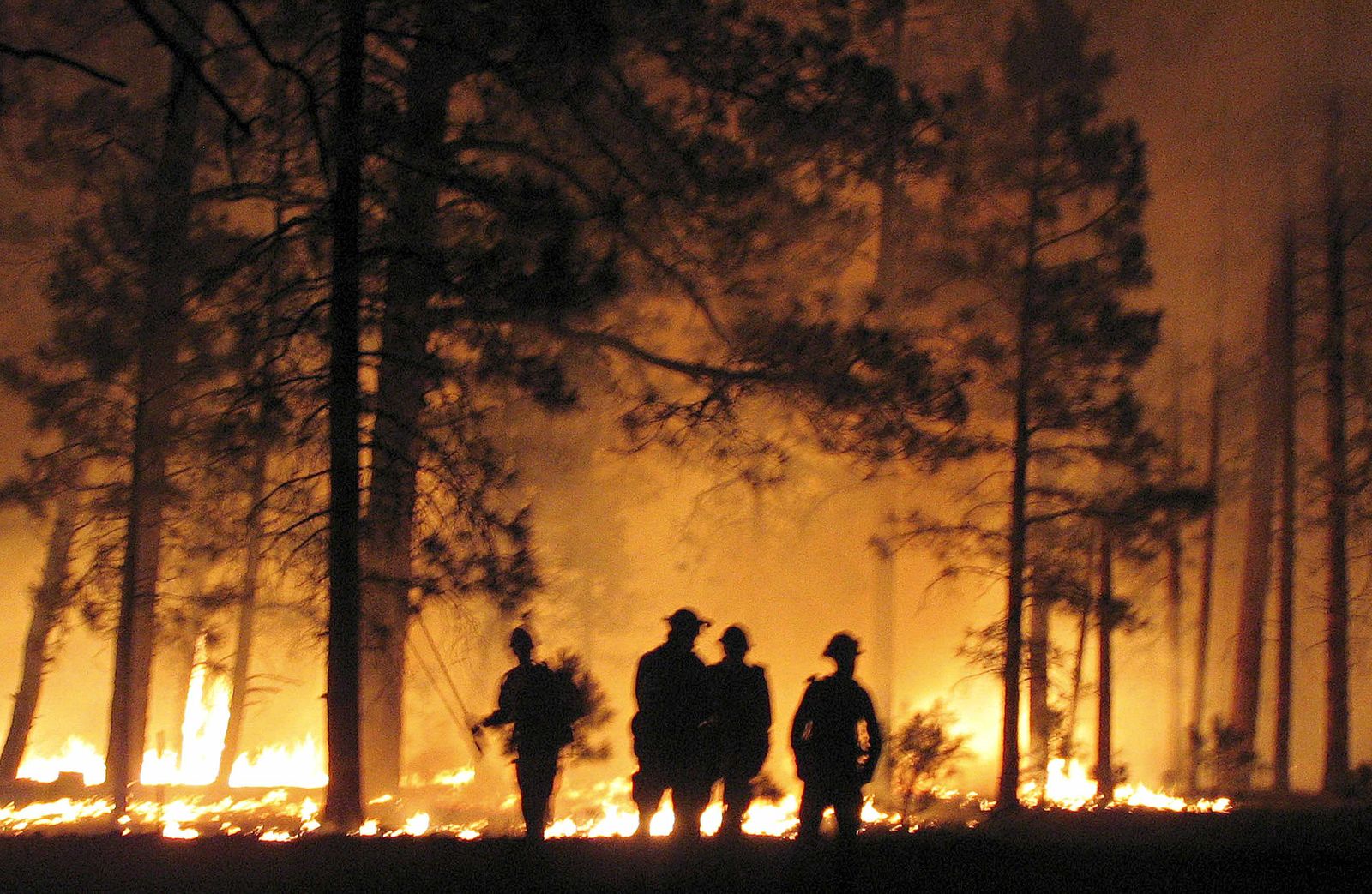 Firefighters battle a blaze on the North Rim near Grand Canyon National Park in Arizona in 2006.