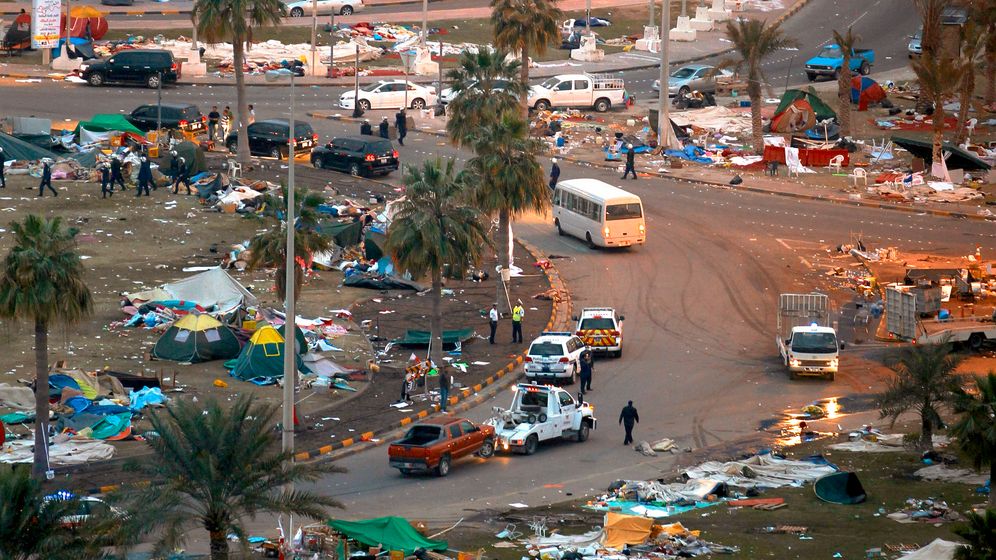 When German state governors, former chancellors or cabinet ministers visit the emirates and kingdoms along the Persian Gulf, the ambassadors in the respective countries like to say: "We are living in the eye of the hurricane here." The states are seen as an oasis of stability, surrounded by rogue regimes and failed states.

Or rather, they were. As of last week, even the Gulf nations are no longer as calm as they used to be. Following the revolutions in Tunisia and Egypt, as well as popular protests in Libya, Jordan and Yemen, the sea change in the Arab world has now reached the sheikhs.

Tanks have been out on the streets of Manama, the capital of Bahrain. The city had been due to host two rounds of the GP2 Asia Series car race -- one last weekend, and one as part of the Formula One Grand Prix weekend from Mar. 11-13 -- but both have been cancelled.

Hence the sound of engines roaring through the city's financial district in the early morning hours on Thursday did not come from race cars, but from heavy diesel-powered trucks carrying police riot squads. Their destination was the capital's Pearl Square, where a few dozen tents had been set up beneath a 90-meter (295-foot) monument to Bahrain's pearl divers.

A Fear of Open Spaces

The roundabout is relatively small, as public plazas go. And only a few hundred people had been protesting there since Tuesday of last week, waving Bahrain's red-and-white flag and demanding more democracy. It was a relatively small demonstration.

But the regimes in the Arab world have developed a fear of squares and plazas. A political agoraphobia, if you will, has spread among the region's autocratic rulers, who are convinced that those who tolerate occupied squares will end up like former presidents Zine al-Abidine Ben Ali of Tunisia or Egypt's President Hosni Mubarak, who were both recently topped by popular protests in their countries.

At least four people died, including a seven-year-old girl, when police stormed the tent city at 3 a.m.

The protesters had hoped that the roundabout surrounding the Pearl Monument would become Bahrain's version of Tahrir Square in Cairo. But now the events there are more reminiscent of what happened in Tiananmen Square in Beijing in 1989. Within a few hours, what had been a tolerated forum for demonstrators seeking more democracy had turned into a monument of mourning, as the tiny country of 1.23 million became the latest combustion point in the Arab revolution. The situation in Bahrain clearly poses a potential threat to the region -- and to the West's oil supply.

Following a demand from protest leaders that they would not enter into any talks until troops had been pulled back, the government withdrew the military from the streets of Manama on Saturday, followed by the police. The move allowed thousands of protesters to return to the Pearl Square roundabout. They remained there through the night, with supplies of food and electricity allowed through.

On Monday, the authorities arranged a counter-protest, with thousands of pro-government demonstrators gathering outside the Al Fateh mosque in Manama to support the monarchy. It was also announced that the Formula One Grand Prix due to be held in Bahrain in March had been called off by the crown prince. And in a bid to appease the protesters -- who were already preparing for another big demonstration on Tuesday -- the king of Bahrain announced plans to free some of the country's political prisoners.

A senior opposition figure was also set to return to Bahrain on Tuesday. Hassan Mushaima, leader of the Haq movement, revealed on his Facebook page that he wanted to test if the government was serious about its offer of talks or if he would be arrested upon his return from exile in London.

The First Domino in the Line

Bahrain is not Egypt. The island nation has a smaller population than Munich, and more than half of its inhabitants are foreigners. Why, then, should the world care about this small country and its problems?

It shouldn't, except for the fact that the world is dependent on oil, and the fact that two regional powers, Iran and Saudi Arabia, are both seeking to exert influence in Bahrain. The country is a domino at the very front of a line. The geopolitical consequences of a collapse of the regime in Manama would extend well beyond the region.

"We were sleeping," says Umm Yussuf, a 26-year-old bank employee and blogger. "Someone said: Now they're coming. We took the children to the big tent. Then everything got really loud, there was smoke everywhere and it was hard to breathe."

"Pellet guns are used to kill dogs, not people. What kind of a government does such a thing?" Yussuf asks. He says that they were foreign police officers, from Yemen, India and Pakistan. "They have no scruples. They shoot and don't ask questions."

Two paramedics, Yassir Ali and Jamil Abdullah, show us their injuries. One has a broken arm and the other has a black eye. They say the police dragged them out of the hospital, tied them up and beat them. "We were not allowed to rescue the injured," they say.

Ironically, all of this is happening in a country whose slogan is "Business Friendly Bahrain," a country that likes to cultivate an image of being moderate and cosmopolitan, and which is known for its relaxed customs and complete lack of corporate taxes.

"We were standing on the edge of an abyss," says Foreign Minister Sheikh Khalid bin Ahmed, who, like the majority of the cabinet, is a member of the Al Khalifa royal family.

The ruling clan is known for its tenacity. Prime Minister Sheikh Khalifa Bin Salman Al Khalifa has already been in office longer than former Egyptian President Mubarak was. In fact, the sheikh has been Bahrain's only prime minister since the country gained its independence from Britain in 1971. Is this stability, or torpidity?

The extent to which King Hamad bin Isa Al Khalifa supported the events on Thursday is still unclear. The prime minister commands the police, and the king, who is the prime minister's nephew, has reportedly been critical of the many mercenaries in the police force.

The demonstrators have little appreciation for such internal matters within the royal family. They feel ridiculed by the king, who in a televised address had indicated a willingness to talk.

Now Bahrain, an otherwise unassuming place, has shown its ugly face, sending a chill down the spine of international diplomacy.

A Bulwark Against Iran?

"We will stand together, hand-in-hand, in the face of the threat," Sheikh Abdullah, the foreign minister of the United Arab Emirates (UAE), said on behalf of all Gulf nations. The chief diplomats of the Gulf Cooperation Council met on Thursday at the Ritz-Carlton in Manama, less than 2 kilometers from the Pearl roundabout.

During a visit in December, US Secretary of State Hillary Clinton praised Bahrain for the tentative reforms it had made to date. Now she has expressed her "deep concern" about the situation in the country. United Nations Secretary General Ban Ki-moon also reacted surprisingly quickly to the violence in the tiny nation.

About 70 percent of Bahrainis are Shiites. The Al Khalifa ruling family, however, is Sunni and loses no opportunity to present itself as the last bulwark against the mullahs in Tehran, who are Shiite. But the clerics in Bahrain are quite liberal and want nothing to do with figures like Iranian President Mahmoud Ahmadinejad.

Nevertheless, Bahrain's Shiites feel systematically disadvantaged. Very few are accepted into the civil service, and certainly not as police or army officers. Voting districts are carved up in such a way that Shiites never outnumber Sunnis in the parliament. Their religious and political leaders are harassed and periodically arrested. Bahrain straddles the same religious fault line that became visible in the Lebanese civil war 35 years ago and in Iraq five years ago.

The Only Sex Shop in the Region

Besides, Saudi Arabia is nearby; dangerously so, in fact. From Pearl Square in Manama, the Sheikh Khalifa Highway leads to the King Fahd Causeway, which connects the island nation with the Sunni kingdom of Saudi Arabia. Manama, with its many nightclubs, legal sale of alcohol and the only sex shop in the region, offers many Saudi Arabians a brief respite from the strict morals of their own country.

There are old family and tribal ties between Bahrain and Saudi Arabia's Eastern Province, where one-10th of the world's total oil production is pumped out of the ground every day. For centuries, Eastern Province has also been home to Saudi Arabia's Shiite minority, which is treated even more poorly by the Sunni leadership in Riyadh than Shiites are in Bahrain.

This explains why the House of Saud is currently feeling nervous. If the fury among Bahraini Shiites spreads to their fellow Shiites in Saudi Arabia, the world's most important oil-producing region could descend into conflict. It isn't too late to introduce the necessary reforms, Saudi billionaire Prince Talal warned King Abdullah, who is his half-brother. Otherwise, he added, Abdullah's rule could also be threatened.

Iran, the rival from the other side of the Gulf, would almost welcome such a conflict. Tehran already sees Bahrain as Shiite territory and, therefore, as a sort of 14th province of the Islamic Republic of Iran.

Hence Bahrain, like Lebanon, is a classic client state. Its large neighbors, enemies that each support different segments of the population, are wrestling for influence there. But Bahrain, unlike Lebanon, is in a critical location with respect to the world's energy supply.

This explains the crisis meetings in the foreign ministries of the West.

It also explains the existence of the heavily secured, kilometer-long Mina Salman pier in Manama. Since the 1990s, the United States has used Bahrain as a base for the Fifth Fleet, a military force for the Gulf region that currently consists of 6,100 marines and civilian personnel. The fleet is the core of Washington's Iran containment policy.

Bahrain is "a place run by an oppressive and corrupt little regime, long coddled by Washington because the US Navy's Fifth Fleet is headquartered there," writes former CIA analyst Graham Fuller.

And like in Egypt, Tunisia and Saudi Arabia, the question that arises in Bahrain is how much longer the United States and Europe can afford such an ugly status quo.

'Freedom Comes at a Price'

It is possible that the prime minister will step down now, after 40 years in power. The Shiite opposition group Al Wefaq is calling for the dissolution of parliament and has withdrawn its members from the body.

There are already reports of panic buying in the supermarkets. According to the rumors swirling in Bahrain, a shopping center was looted, the airport was closed and a curfew was imposed. None of this is true. What is true, however, is that people in Bahrain have the feeling, or want to have the feeling, that they are experiencing their version of the events in Egypt.

On Friday morning, the regime staged a pro-government rally in front of the Grand Mosque. It consisted of a convoy of powerful cars brightly adorned with images of the ruling family.

The Shiite neighborhoods, on the other hand, were bedecked with black flags of mourning. Several thousand people had gathered at the cemetery in Sitra on the outskirts of Manama. Some of the women wearing black robes were also draped in the red-and-white national flag. Only a few hours later, security forces opened fire on the demonstrators once again. More than 50 people were wounded, and one young man died at the Salmaniya hospital of a gunshot wound to his head.

"Freedom comes at a price," says Ahmed Rassul, the manager of a railroad company. "You have to pay for freedom with blood."

Rassul predicts there will be more deaths. "It's only just begun."