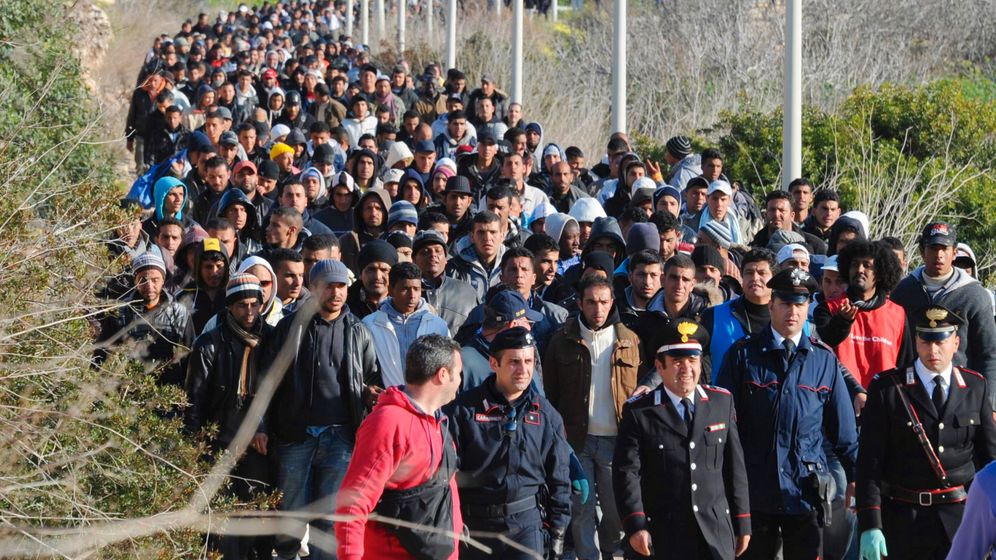 For the young people of Sfax, their newfound freedom begins at dusk, on a beachfront street lined with palm trees. But this freedom doesn't come with the sweet scent of jasmine. Instead, it smells of sweat, motor oil and putrid algae.

Under the cover of darkness, young men drag canisters of gasoline to the beach, along with bags of milk, sugar and biscuits, which they combine to make a doughy pulp to stave off hunger on the stormy seas.

A full moon is rising over Sfax, the second-largest city in this country of 10 million on the North African coast. Munir, a 21-year-old with the beginnings of a beard around his mouth, is wearing everything he owns: a down jacket, a leather vest and two pairs of jeans.

He wants to leave his country, just as it is about to blossom. It's been five weeks since the Jasmine Revolution, with which the Tunisian youth drove out the country's eternal ruler for life, Zine al-Abidine Ben Ali, but Munir still doesn't believe he has a future in his country.

In the moonlight, Munir draws a diagram in the sand depicting the route he has chosen for his passage. Some 100 nautical miles to the northeast lies Lampedusa, which Munir sees as paradise. The trip takes 15 hours at night, provided the captain is experienced. The problem is the wind, says Munir, drawing thick arrows in the sand, the Mistral and the Libeccio, and anyone hoping to cross has to wait until it has died down.

He calls the captain on his mobile phone. The captain had told him that they would make the crossing tonight, that he should drum up 15 men, and that each of them should bring 2,000 dinar, or €1,000 ($1,360) to pay for the trip. There still isn't a boat in sight.

'One Leg in the Boat, the Other in the Grave'

Munir said goodbye to his father a few hours ago. The father was sitting in front of the television set in his tiny apartment, staring at images of crowds protesting in Egypt, Bahrain and Libya. Ben Ali had suffered a stroke in Saudi Arabia, the news anchor said, and was now in a coma.

Munir's father had sat there dejectedly, the euphoria of the last few weeks now dissipated, making himself sick with worry over his son. He doesn't want Munir to leave the country. "You'll have one leg in the boat and the other in the grave," he said. The father believes in the revolution in the Arab countries. "Look at them cheering. You're gambling your life away. Help rebuild your country instead," he had told his son. "How can you rebuild something if there's nothing there?" Munir asked.

Munir has been planning his escape for the last three years. He has sat in a boat a dozen times, but the National Guard's strict controls thwarted his plans each time. But now his prospects are good, given the power vacuum in Tunis. No one knows what the politicians in the transitional government are planning, whether and when there will be elections, and whether the Islamists are gaining ground. Since Jan. 14, the police and National Guard have had their hands full with other problems and little time to hunt down would-be refugees. Some are afraid to leave their barracks, fearing retaliation from the demonstrators, while others are striking for higher pay.

Now that the new government has come under pressure following the arrival of more than 5,000 Tunisian migrants on the Italian island of Lampedusa, the authorities have returned to the beaches in trucks, illuminating the sand with their headlights. The westerly wind is largely to blame for the fall in the number of refugee boats in recent days, but the wind will eventually die down and the flow of migrants will surge once again. It will continue for as long as there are young men like Munir, who feel trapped by their poverty and lack of prospects.

Munir is a "Harraga," a derivative of the Arab word "harragar," or "to burn." He is one those who burn their papers before getting into a boat to seek their fortunes in Europe. He is also one of those who revolted against unemployment and repression, thereby triggering the Tunisian revolution in the first place. They are now continuing their protest on the waves.

"The passage is very easy at the moment," says Mohammed, a young doctor. It's almost like walking into a travel agency, he says. You make a few calls, and you're given the choice between a fishing boat and a tourist boat departing from the resort towns of Djerba or Hammamet. You give someone a mobile phone number, bring your money to the beach and wait. His brother did the same thing last Wednesday, says Mohammed. No one in his family had any idea that he was leaving.

University Degree But no Job for Years

It isn't just the uneducated who are fleeing. Mohammed's brother, a math teacher with a university degree, had waited years for a job. Three days ago, he called Mohammed from a reception center in Apulia in southeastern Italy and told him that he planned to board a train to Paris the next day.

Mohammed is standing in front of the city hospital in Sfax. He is only 25, but he has already seen the victims of failed passages in his ward, dehydrated or with bullet wounds. The bodies that have washed ashore are in the morgue in the basement. He says: "Something is going wrong in this country. We now have freedom of the press, and we can talk about Tunisia's problems, like centralism, the corrupt elites, torture in the prisons, but we're not tackling them." This morning, he says, he heard two 16-year-olds on the street talking about their friends who now live in Italy, where they drive Vespas and have girlfriends and jobs, and that they too had decided to make the trip.

Mohammed says Tunisians must force their politicians to finally address the taboo subject of mass emigration. He wrote to the transitional president, Fouad Mebazaa, and placed a petition on the Internet. Together with journalists at a small private television station in Zarzis, Mohammed established Internet forums showing films of the dangerous crossing. They want to convince the country's young people to stay in the country and prevent Tunisia from being bled dry.

But Munir is more interested in fast money, wealth and the future. He is staring out at the dark sea. It is shortly before midnight and there is still no boat in sight, only a few hooded figures without luggage. The wait is getting to be too much for him. He calls Saif, the Harraga king of Sfax, and tells him that he wants to get out, that he wants to make the trip tonight. They meet on the beach, between a mosque and the police station, and whisper to each other.

Saif is a 35-year-old man with tired eyes and tattooed forearms. The boys of Sfax admire him. He owns a boat and is an experienced captain. They beg him to take them across the Mediterranean. Saif says he can understand their yearning for freedom. He had it himself, three times, he says, but it was the biggest mistake of his life, and he paid a heavy price for it.

Life as a Second-Class Citizen Beckons

Saif's odyssey began 12 years ago, when he took more than 50 Harragas with him on his boat. The passage to Lampedusa took less than 15 hours. He ended up in Naples, where there was no work for him. He was sleeping among the bums at the train station. Now he was an illegal alien, and the loneliness was making him sick. After six months Saif took a ferry back to Tunis, feeling like a failure.

He tried again six months later. This time he knew what to expect. "We are second-class people. Men become drug dealers and women work as prostitutes. Either you get used to it or you fail."

He tried his luck at the train station in Bologna, pushing cocaine and heroin he bought from the Albanian mafia. He was now making more than €1,000 a day -- and spending it just as fast, on girls, parties and alcohol. He forgot to pray and he forgot his native Tunisia. When one of his sisters died, he returned to Sfax and paid for the funeral. He was now the family hero, but he had already succumbed to a fast and false life. He stole a boat in the harbor, not far from the spot where Munir and the other young men are now waiting, and made the passage to Lampedusa a third time.

Now he was not only dealing heroin, but smoking it himself. He was caught with half a kilo, €25,000 in cash and a loaded pistol, and spent more than three years in prison. When Saif returned to Tunisia he was a broken man. Now he repairs fishnets, just as he used to do. He married the daughter of a neighbor who knows nothing about his past. She recently suggested that they emigrate together.

Munir isn't interested in the flipside of good fortune. He is deaf to Saif's warnings. He returns to the beach, and his mobile phone finally rings at around 1 a.m. The captain says that the crowd was too big today and that he has to find a better boat, that Munir is on the waiting list and should come back to tomorrow. "Inshallah," says the captain, "everything will work out tomorrow."