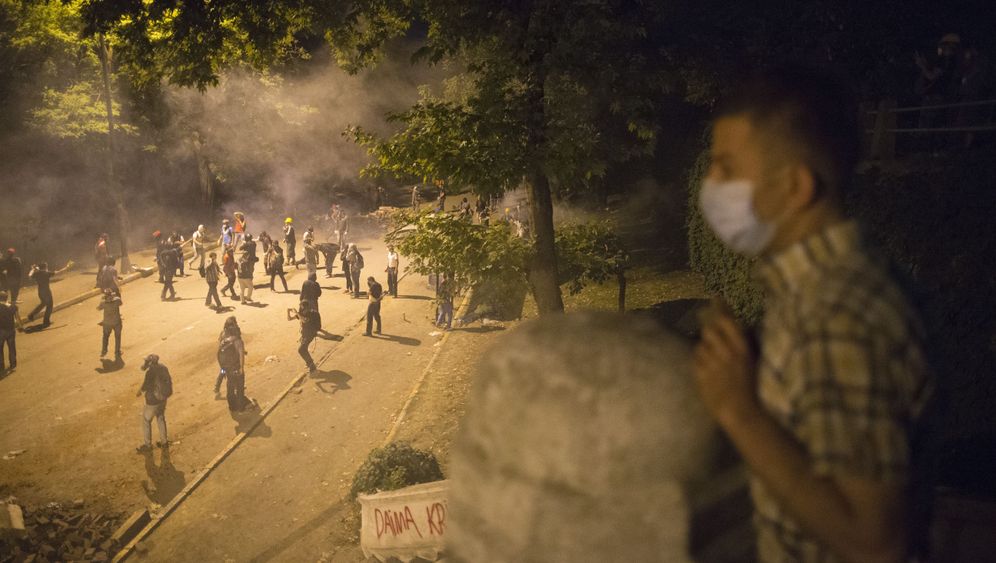 The struggle on the streets of Istanbul was to start up again in just a few hours. As the Turkish police were charging up their water cannons and loading their pepper spray canisters, Okan hid in a café near Taksim Square.

He removed the battery from his cell phone out of fear that the conversation could be monitored. He glanced around, on the lookout for plainclothes policemen, then took a quick drag on his cigarette. He would have preferred to have left already, on his way home, but first he wanted to explain why, for the first time since the Turkish protest movement began, he wouldn't be joining his friends in Taksim Square in the evening.

Okan, a slim man in his late twenties with a pale face and an eagle tattoo on his shoulder, is a member of Çarsi, a group of avid supporters of Istanbul soccer club Besiktas. For four weeks in June, he fought with Çarsi against the police, erecting barricades and directing demonstrators to positions around the city via Twitter. "I've inhaled plenty of tear gas in this fight," Okan says.

Besiktas ultras, the clubs most ardent supporters, have a reputation as the world's loudest soccer fans, with a record-breaking 141 decibels recorded in the stadium at a league game this May. Last month, the fans joined the uprising of Turkey's civilians against Prime Minister Recep Tayyip Erdogan's heavy-handed government. Many Turks now consider Çarsi the world's bravest fans as well.

The Besiktas fans didn't start the revolt -- it began as a demonstration against the destruction of an Istanbul park. But their participation played a pivotal role in transforming the protest into a larger uprising. Çarsi mobilized the masses and added humor into the mix as well. Their chants, including "pepper spray olé!" and "Go on, fire the gas / Go on, fire the gas / Throw away your club / Take your helmet off / Show us that you dare," are among the few slogans all the demonstrators have been able to agree on.

Erdogan's government responded harshly to Çarsi, temporarily arresting 22 members of the group and accusing them of having founded a terrorist organization seeking to overthrow the government. Two members are still in prison and, if found guilty, may receive a life sentence.

Okan asks that his full name not be published, since he too spent four days in prison. Police came for him in his one-bedroom apartment in the Besiktas district of Istanbul one day at dawn. He had just enough time to get dressed and send a text message to his lawyer: "It's happening." In prison, Okan received a bowl of rice twice a day. If he needed to use the toilet, he had to ask the guards for permission. He was interrogated again and again: Did you call the police sons of bitches in your tweets? Why did you want to attack Erdogan's residence in Istanbul? Okan, did you want to overthrow the government?

Erdogan, Okan says, is a megalomaniac who wants to dictate everything, from how many children women should have to whether a new bridge or shopping mall is built in Istanbul. Okan doesn't drink himself, but he nevertheless can't understand why Erdogan is so dead set against raki, the anise-flavored liquor that is Turkey's national drink. He says he took to the streets for democracy -- and for Çarsi.

There's a saying that soccer is more than just a game, and this is truer in Turkey than almost anywhere else. The degree of identification people feel with the team they support is enormous, even though the sport is notoriously corrupt in the country. Just last week, UEFA barred Besiktas from European competitions for a year following a scandal over game manipulation. Local rival Fenerbahçe is similarly banned, but for the next three seasons.

Losing a Son to Çarsi

Istanbul's three major soccer clubs, Fenerbahçe, Besiktas and Galatasaray, each represent a different segment of society. Fenerbahçe is seen as the club of the nouveau riche and nationalists, and counts Prime Minister Erdogan among its supporters. Istanbul's middle class comes together in support of Galatasaray. Besiktas, on the other hand, is the team of the working class and left-wing intellectuals. The club doesn't have a huge budget at its disposal and the stars of the soccer world generally choose to play for other teams.

When Okan was six years old, his uncle brought along Besiktas players to his circumcision ceremony. The pro players let the boy keep their sweaty jerseys, stayed the whole evening and signed autographs. That same year, 1991, Besiktas won the Turkish football championship. From then on, Okan saw everything in "siyah" and "beyaz," black and white, the colors of his new favorite club. The eagle that is the team's mascot became Okan's favorite animal. His father, a fanatical Fenerbahçe supporter, had to accept that he had lost his son to Çarsi.

Çarsi means "market" and is what the residents of Besiktas -- also the name of a neighborhood on the European side of Istanbul, not far from Taksim Square -- call the main street that runs through their quarter. This is where members of Çarsi, founded in 1982 by a group of school friends, meet. Many of them run stores here, and the "Amigos," the fan group's leaders, meet at the Eagle Café to play cards.

Okan wound his way through the narrow streets of his neighborhood, which is full of young people wearing Besiktas jerseys and windows draped with Besiktas flags. As he passed by, Okan greeted the waiters at a water pipe café, the merchants at the fish market and the sales assistants in a record shop. "Besiktas is my home," he said. Okan's parents are divorced and Çarsi has become his family. The Amigos find him work, for example painting their fan posters.

'We Are All Black'

Çarsi takes the side of the oppressed and the weak, Okan says, and he likes that. The group's motto is "Çarsi her seye karsi," or "Çarsi is against everything," and the Besiktas fans were politically active long before the Taksim Square protest began. They demonstrated against the Iraq war and the construction of a nuclear power plant. They collected money for earthquake victims and regularly donate blood. One of the group's leaders is Armenian -- this in a country that still won't recognize the mass murder of Armenians during World War I as genocide. When fans of an opposing team used racist slurs against a black Besiktas player, Besiktas supporters unrolled a banner in the stadium that read, "We are all black."

As such, it is unsurprising that this group of Besiktas supporters would participate in the protests against Erdogan's government. Çarsi has been fighting despotism and government caprice for 30 years. The group has 300,000 followers on Twitter and when the demonstrations began, one word was enough to mobilize supporters: "geliyoruz," or "we're coming." Thus summoned, tens of thousands of Besiktas fans set out for Taksim Square on Saturday, June 1, wearing black and white fan scarves and carrying drums and fireworks. They engaged in skirmishes with police, and, in an operation that quickly became a YouTube hit, commandeered an excavator and used it to drive back a water cannon. Unlike many of the other demonstrators, Çarsi members were no strangers to scuffles with police. Nearly every Besiktas home game sees fights between fans and security personnel. "Pepper spray is our perfume," Okan says.

Okan spent many days and nights in the protesters' camp in Gezi Park at Taksim Square. He rode his moped through the streets around the square, collecting sandwiches for the demonstrators from nearby restaurants. He tracked down helmets to provide protection from the police's attacks and threw tear gas canisters back with his bare hands. Okan is also a devout Muslim, and when he prayed five times a day, communists and nationalists stood guard outside the prayer tent. In Gezi Park, Okan says, people came together who wouldn't even have given each other the time of day before. Even Galatasaray and Fenerbahçe supporters marched together with Çarsi.

Fans of these three soccer teams warred on the streets of Istanbul in the 1980s, causing several deaths. An agreement between the fan groups' leaders in the 1990s curtailed the violence, but never stopped it entirely. Just the fact that these clubs' supporters are demonstrating against Erdogan together, Okan says, is a revolution in and of itself.

Although the government cleared the camp in Gezi Park, many Çarsi members continued to protest. One evening, hundreds of demonstrators meet in a park in Besiktas for an "open forum," organized by Çarsi and with members of the group standing guard around the area. People gathered there in an amphitheater, between statues of authors and journalists, as speakers took turns at the microphone. One called on the listeners to boycott Burger King, since the fast food chain apparently refused to allow people seeking refuge during the protests to enter their restaurants. Another announced a demonstration happening the next day.

A few hundred meters away, in a bar run by a Çarsi leader, the TV was once again showing images of street battles between demonstrators and police, barricades burning and security forces firing tear gas canisters into the crowd. The patrons sitting in front of the bar, smoking and drinking beer, chanted anti-government slogans and sang Besiktas fan songs: "We will see sunny days, children, we will see beautiful days."

Three young Besiktas fans had just returned from the demonstration at Taksim Square. Exhausted after escaping the police, they dropped down to sit on the ground in front of a statue of an eagle. Dogs roamed the streets and glue-sniffers leaned against the building walls. The sole woman in this group of fans said she had barely slept more than two hours a night for the past four weeks, but still she wanted to continue protesting in the hopes that Erdogan would resign.

Perched on a metal chair by the side of the road, Okan was relieved his friends had returned from Taksim Square, with no one arrested or injured. He said he thought the phase of protest involving street battles with the police needed to come to an end. There needs to be a political party, he said, a "Gezi Party" that will show Erdogan he's facing a serious opponent.

Erdogan shouldn't think the fight is over, Okan said, and he believes the people are no longer willing to remain silent. Drawing on a metaphor from the sport he loves so much, he declared, "The second half is just starting." 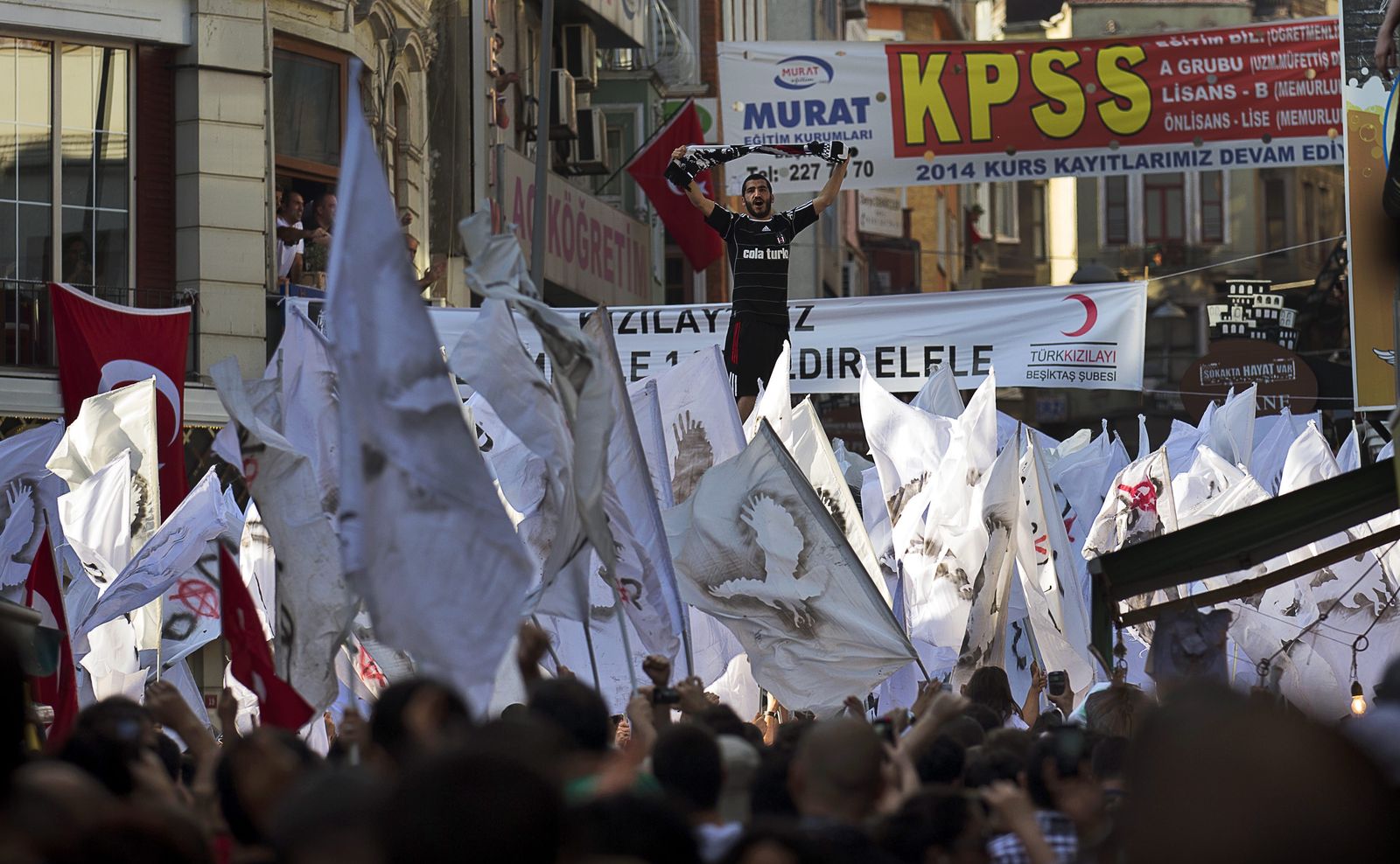 Çarsi members gathering in June before heading to Taksim Square for protests against the government. Çarsi helped mobilize the masses and added humor into the mix as well. Their chants, including "pepper spray olé!" and "Go on, fire the gas / Go on, fire the gas / Throw away your club / Take your helmet off / Show us that you dare," are among the few slogans all the demonstrators have been able to agree on.