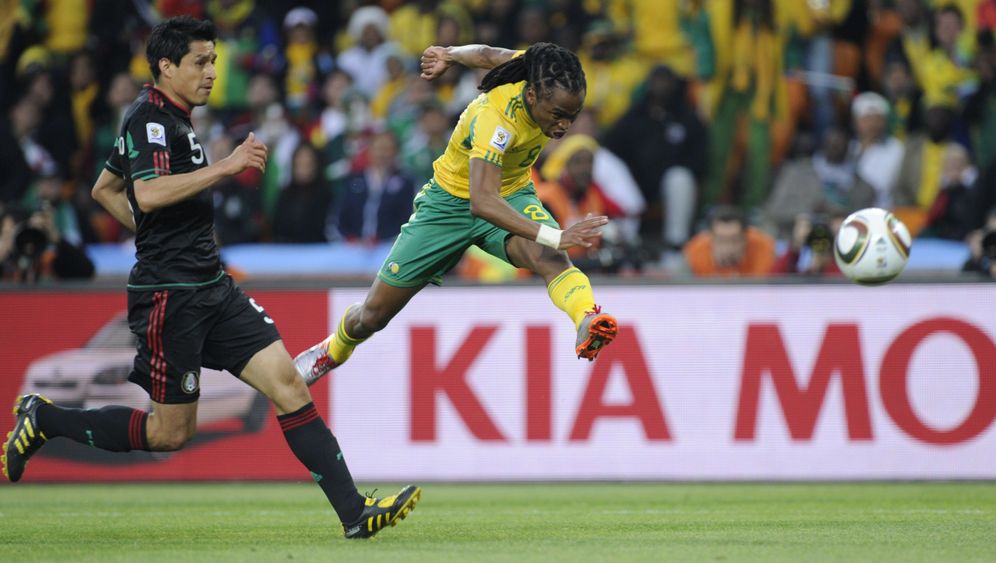 Photo Gallery: 'It's Not Only Football that Matters'

SPIEGEL: Mr. Tshabalala, with your brilliant goal in the opening match against Mexico you generated great enthusiasm for South Africa's national football team throughout the country. In the end, your squad even beat France, one of the early favorites. But ultimately, your team became the first ever World Cup host to be eliminated during the group stage. Was that disappointing?

Tshabalala: To me it was fantastic, a huge success. It was my first World Cup, the first in Africa (and) I scored the first goal. This is the highlight of my career so far.

SPIEGEL: Some in the South African press viewed the national team's result as a flop.

Tshabalala: We gave our best -- but we suffered a 3-0 defeat in our second game against Uruguay. Everything came together when they scored the second goal: A penalty kick against us, our goalkeeper was sent off, and an offside was overlooked. There's nothing to be done about that anymore now.

SPIEGEL: Recently, executive members of the South African football association were quoted as saying that the team's performance had been disappointing. Is this criticism justified?

Tshabalala: Most of us had never played at this high level before. I did not expect this sort of reaction from these people. No sooner had we been eliminated than they saw everything in a negative light, the exact opposite of the support we experienced beforehand. First they said we had totally transformed the standing of the national team and that we could be proud of ourselves. I still maintain that we brought joy to South Africans. We all won together: Blacks, whites, all South Africans.

SPIEGEL: Has the experience changed your life?

Tshabalala: Definitely. I made people proud through my effort and my performance. You don't forget something like that.

SPIEGEL: The idea was that the team would unite a strife-torn country by playing great football. Did you feel that responsibility and did it weigh heavily?

Tshabalala: I did sense it. When we returned from the training camp in Germany at the end of April and then played the five friendly games at home. That is when we started to convince people. We won their hearts.

SPIEGEL: Two days before the first game, the football organization had the team drive through Johannesburg in an open bus. Your coach, Carlos Alberto Parreira, was not very happy.

Tshabalala: Perhaps it was unwise, in terms of being well prepared. But the event made us realize that the entire nation was behind us. There were almost 200,000 people in the streets, screaming, waving flags, blowing their vuvuzelas. Going out there was so emotional, it really was something. That was when we knew: All these people would help us, even in hard times. But we also knew we mustn't disappoint them.

SPIEGEL: What was it like for you at home?

Tshabalala: The night before the first game I received a phone call from my family: Listen, the people from our neighborhood are all out in the streets, singing!

SPIEGEL: You come from the township Phiri, part of Soweto.

Tshabalala: I had a good childhood there. My family was not poor. Not rich either, sort of average I would say. Life was okay. My father worked as a taxi driver. We lived in my grandparents' house: My cousins, my parents, uncles, aunts, everyone. There was the big house and some outlying rooms.

SPIEGEL: How many people under that one roof?

Tshabalala: I would have to count. About 10. Fortunately in the meantime I have been able to buy my parents a house. I have also moved into a house of my own, in Littlefox. I also have a younger sister. She's 11 and she already plays football a bit. I can show you a photo of her on my mobile phone.

SPIEGEL: Your team captain Aaron Mokoena has talked about how, at the age of 11, he had to be hidden away and disguised in girl's clothes because a mob was looking for boys in township to kill them. Did you experience political unrest too?

Tshabalala: No, but my parents did. They were students during the Soweto uprising in 1976.

SPIEGEL: Back then, hundreds of blacks were shot dead.

Tshabalala: They were close by. They often talked about it at home.

SPIEGEL: How many of the national languages do you speak?

Tshabalala: Three: Zulu, English and Sotho. I speak three more too but not fluently. And I can more or less understand Afrikaans. How many (of your national) languages do you speak?

SPIEGEL: In Germany we speak one.

SPIEGEL: What sort of education did you have?

Tshabalala: I attended three schools and then graduated from high school. That's when I had to decide whether to study or become a professional football player.

SPIEGEL: That probably wasn't such a difficult decision?

Tshabalala: I had already started playing football in Phiri at the age of seven. First for Phiri Arsenal, later for the Phiri Movers. As a teenager I was already playing for my current club, the Kaizer Chiefs. But back then football practice started at four o'clock and school didn't finish until four. So I opted for school and went back to Phiri, then to the Moroka Swallows. I had to take a train to practice. I always waited on the platform until someone came along who could give me some money or lend me their monthly ticket. If no one came along, I would walk. That took about an hour.

SPIEGEL: In fact, you were first picked for the national team while you were still playing in the second division.

Tshabalala: Yes, I was playing in the second division for Alexandra United and for Free State. Do you know where that's (based)? Its four hours drive from Johannesburg. And I was 20 when I went there.

SPIEGEL: When did you first play football with white people?

Tshabalala: As a child, never. I played against whites as a teenager with the Kaizer Chiefs. The whites are not as talented but they are keen to learn and they do the groundwork properly. Running practice, accurate passes, running into (free) space. They learn that sort of thing very thoroughly. They know how to be successful in life. We, on the other hand, are agile, but rather lethargic.

SPIEGEL: Your youth coach claims that you shot exactly the same kind of goal as you did against Mexico -- with your left foot into the corner -- when you were 17, during the Batho Batsko Bakopane Cup.

Tshabalala: What, he still remembers that? To be honest, I often shoot that sort of goal. In the penalty area, I often kick with my left foot.

SPIEGEL: But your World Cup opponents didn't know that.

SPIEGEL: Your team spent three months in training camps before the World Cup. Was that really necessary?

Tshabalala: We were trying to find our identity in terms of the game. We found a mixture between the technically sound, South American style and the disciplined and tactical European style. That made us better. It was strenuous, of course. But you have to ask yourself what you want from life. And then you have to work towards that. Training twice a day, analyzing other teams on DVD.

SPIEGEL: After your victory against France and the end of your team's World Cup run, South African President Jacob Zuma visited your locker room. What did he say?

Tshabalala: We were surprised to see him there. He spoke words of encouragement and thanked us. He said the nation was proud of us.

SPIEGEL: Do you know the 2009 Clint Eastwood-directed film "Invictus" about the South African rugby team winning the rugby World Cup in 1995? The rugby team was a symbol of apartheid, yet as president Nelson Mandela supported it.

Tshabalala: I watched that film the day before our first match. We had watched it together two days beforehand as a team, then I watched it again alone. I found it very inspiring. There is this moment during the film when things are going badly for the rugby team and Madiba, as we also call Mandela, invites the captain to join him for a cup of coffee. He tells (the captain) about his time in prison and about his faith in himself. We met Madiba too. A week before the opening match he met us at the Mandela Foundation. He was wearing a shirt with the number of our captain, Aaron Mokoena, on it. Mokoena introduced us all one after another.

SPIEGEL: What does this World Cup mean to the South African nation?

Tshabalala: It is not only football that matters. It is also about all the jobs that were created.

SPIEGEL: FIFA is always talking about the legacy of the World Cup. What legacy will it leave for the South African people?

Tshabalala: Some jobs will come to an end after the World Cup, of course. But just the time during which people have had jobs and have been able to earn money is a great legacy in itself. People were paid as they had been promised, which does not always go without saying, and they were able to put money aside. We, the football players, also tried to help by making donations to humanitarian charities.

SPIEGEL: But how can one help African football in general? Only one of six African teams competing in the World Cup made it into the final 16.

Tshabalala: I think European players are already practicing a certain professionalism from childhood -- they have a good infrastructure. So by the time they are 16 or 17 they have already achieved a high level of performance. And by the time they are 22, they're world class players. But you also need to have the right mentality. You have to be able to force yourself to work hard.

Tshabalala: There is no continuity. Lots of foreign coaches only come to Africa for a short stint. They have to find out about our style of football and our culture before they can train an African team. With us, the Kaizer Chiefs, youth work has already improved a great deal. The coaches are local.

SPIEGEL: Your goal has made you known in European football circles -- and people like your name. Would you like to play there?

Tshabalala: They like my name? Cool! Of course I dream of Europe. I would like to go there straight away, for the next season. It doesn't matter which country.

SPIEGEL: Did you actually receive a World Cup bonus for the joy you gave the nation?

Tshabalala: Yes, they sent me money, but that was already before the World Cup. For taking part.

SPIEGEL: Mr. Tshabalala, thank you for this interview.