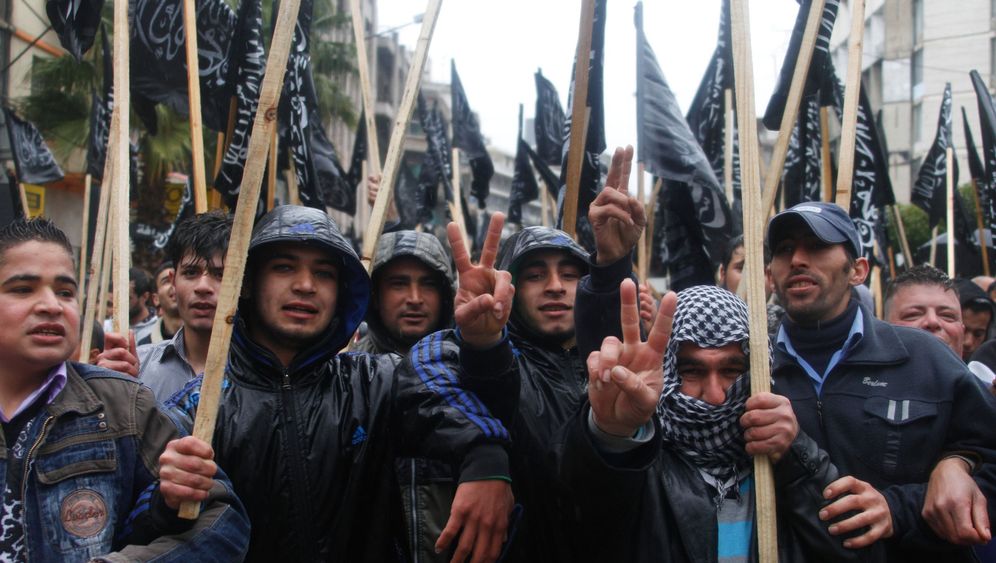 Abu Rami's last foray into war wasn't much of a success. Just after his unit had crossed over the border, one of his men lost his wits. The young man cowered in the undergrowth, trembled and didn't budge. Out of necessity, the whole unit had to come to a stop: Ten Lebanese, armed with 10 Kalashnikovs loaded with 65 magazines of ammunition, had come to a standstill inside the Syrian border, without any backup.

It was pure luck that the group wasn't spotted by a Syrian border patrol and that they didn't come under fire. "We sent the man with the weak nerves back to Lebanon. The rest of us made it as far as Homs," a 40-year-old man who goes by the nom de guerre Abu Rami said, two days after his return from Syria.

The protest stronghold of Homs is located around 30 kilometers (about 19 miles) from the border. The Lebanese volunteers wanted to fight alongside Syrian rebels in the city's Khaldiyeh district. They did just that, and retreated only after they ran out of ammunition. Abu Rami says his unit is now waiting in the safety of Lebanon for its next deployment.

Abu Rami is a commander in the growing band of volunteer Lebanese fighters who are getting involved in the conflict in neighboring Syria. Most come from Tripoli, the northern Lebanese city that is largely home to a Sunni Muslim population. Their hatred of the Assad regime is rooted in the Syrian occupation of Lebanon, which only ended in 2005.

Despite the withdrawal of its troops, Syria still exercizes considerable influence over Beirut. The Shiites are also in power in the Lebanese capital, further fomenting the hatred of Lebanese Sunnis against Assad and his Lebanese allies, which including the Shiite militant group Hezbollah.

'We Lebanese Are Part of the Syrian Revolution'

Radicals among Lebanon's Sunnis view the insurgency in their neighboring country as a welcome opportunity to put an end to Damascus' influence. "The struggle for freedom in Syria is our own struggle for freedom," says Sheik Masen al-Mohammed, one of the most important Sunni religious leaders in Tripoli. "We Lebanese are part of the Syrian revolution, part of the rebellion. If Syria gains its freedom, then we will also win in Lebanon." In addition to the political reasons, the sheik also has a key reason for encouraging Lebanese to fight in Syria. "Assad is an infidel," the sheik says, noting that the Syrian dictator is part of the Alawite sect, which splintered from Shiite Islam hundreds of years ago. Sheik Masen views Assad as an enemy rather than a true Muslim.

In mid-February, Ayman al-Zawahiri, Osama bin Laden's successor as the head of the al-Qaida terrorist network, called on pious Muslims to support the insurgency against the Syrian regime. In an eight-minute video message posted on an Islamist Internet page, Zawahiri claimed that it is the religious duty of every Muslim to aid in the uprising against the "anti-Islamic regime … with everything that he has -- his life, money, views and information." He called Bashar Assad's government a "pernicious, cancerous regime." Zawahiri targeted his message to take up arms directly at Sunni Muslims living in Lebanon, Turkey, Jordan and Iraq. He urged them to rush to the aid of the oppressed people in their neighboring country.

"It is the duty of every Muslim, every Arab to fight the infidels," Sheik Masen also stated. "There is a holy war in Syria and the young men there are conducting jihad. For blood, for honor, for freedom, for dignity," he said, speaking in a warehouse filled with spare parts. In his normal life, Sheik Masen operates an auto repair shop.

But these days he has little time for selling fan belts. Every minute, new applicants arrive in his oil-covered garage. The majority are Syrian refugees hoping to find lodging, a job and help. "We are sister peoples, and the enemy of the Syrian people is also the enemy of the Lebanese," the sheik says, providing a rationale for the efforts of the fighters on behalf of Syrians who have been driven from their homeland.

Abu Rami claims that between 100 and 150 Lebanese have traveled to Syria in recent months to fight alongside the rebels. Between two deployments, he visits the wounded at the hospital and he discusses strategy with those fit for combat. Abu Rami was trained to become a television technician, but he quit his job in order to devote himself to the battle in Syria.

Abu Rami first took up contact with the rebels in Syria last summer. He soon began crossing the border regularly for combat missions. In recent months, he was captured once for a short time and also wounded on another occasion. During what has now become one year of fighting, he has risen to become a leading figure in the network of Lebanese volunteer brigades that are in combat in Syria.

Sheik Masen claims that the Syrian conflict is becoming increasingly international. "We know of Palestinian, Libyan and Yemen fighters who are active there," he said. Iraqis are also fighting in Syria.

The situation hasn't become as explosive the period in the Iraq war when thousands of volunteer fighters flooded into the country in 2006 to wage war against the American occupiers, Sheik Masen says. It's not fighters the Syrian rebellion is lacking -- it simply doesn't have enough ammunition or weapons, he says. "We currently have 20 men willing to fight for each weapon in our possession. They need weapons and ammunition -- not reinforcements."

The Lebanese say they try to help the rebels in whatever ways they can. "We send as many supplies as we can," Masen says. But he adds that, after one year of fighting against Assad, the black market for weapons in the Middle East has dried up. "It is high time that major Arab powers like Saudi Arabia intervene and start officially delivering weapons. That is their duty as Muslims," he says.

Sheik Masen expresses hope that the situation in Syria will soon be like Iraq was and that Arabs from all nations will join forces to battle the regime. "If we get to that point, then we will be able to mobilize tens of thousands of Lebanese," he says.

"I have a long list of telephone numbers of men who want to go to war in Syria," Abu Rami says, adding that most are experienced fighters. "Of the Lebanese who are deployed now, around 60 percent already fought in Iraq," he says. Men who once did battle against American soldiers, and were branded as al-Qaida terrorists, are now fighting on the side of Syrian insurgents, whose victory over Assad would be entirely welcomed by the West. Still, the involvement of foreign jihadist fighters makes it more difficult to differentiate between good and evil in the Syrian conflict.

Last week, the first European fighter voluntarily crossed the border and entered into Syria to fight alongside the Free Syrian Army against the Assad regime. He was "a Frenchman who had just turned 24 and comes from a wealthy family," reports Abu Rami. "He just turned up here with his credit card in hand." Abu Rami says he tried in vain to talk the man, whose parents are Algerian, out of it. "He bought a gun, we gave him a short bit of training and then he went in with one of our units," he says.

Still, Abu Rami doesn't believe the regime will fall anytime soon. "You will first get married when the problem in Syria has been taken care of," he says jokingly to one of his subordinates. "In other words, in 50 years."