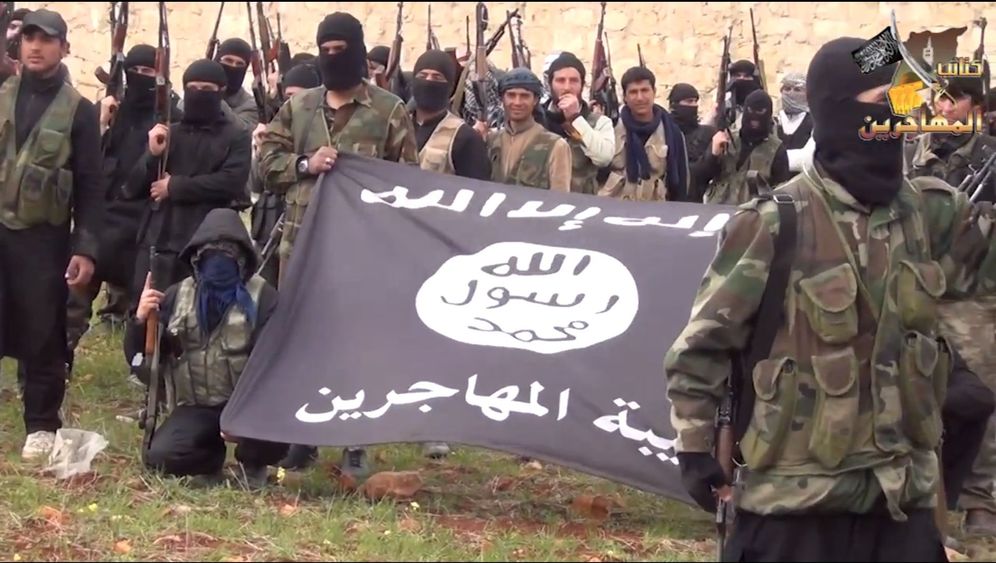 Atmeh looks like the set for a movie about al-Qaida. New arrivals pulling suitcases on wheels search for their emirs, Africans and Asians can be seen on the village streets, and long-haired men dressed in traditional Afghan clothing walk around wielding AK-47s. There are patrons at the local kebab stand whose northern English dialect is peppered with Arabic words and phrases. "Subhan'Allah, bro, I asked for ketchup," says one man. The many languages heard on the street include Russian, Azerbaijani and Arabic spoken with a guttural Saudi Arabian accent.

The once-sleepy smugglers' nest on the Turkish border has become a mecca for jihad tourists from around the world. A year ago, SPIEGEL reporters in Atmeh met with one of the first foreign fighters in Syria, a young Iraqi who said that he had come to overthrow the dictatorship. Meanwhile, more than 1,000 jihadists are staying in and around Atmeh, making it the densest accumulation of jihadists in all of Syria. Ironically, while war rages in the rest of the country, the foreign jihadists have made one of Syria's quietest spots into their base. Or perhaps they have chosen Atmeh precisely because it is so quiet. Once they arrive, many are reluctant to leave.

The Turkish mobile phone network provides strong reception, and the shops carry Afghan pakol wool hats, al-Qaida caps and knee-length black shirts made of the same coarse material used in the Pakistani tribal regions. New restaurants have popped up, and a company called International Contacts books flights and exchanges Saudi riyals, British pounds, euros and US dollars into the local currency. The pharmacy sells miswak, a teeth-cleaning stick from Pakistan with which the Prophet Muhammed supposedly brushed his teeth. The package label promises that the use of miswak increases the effectiveness of subsequent prayers by a factor of 70.

The Jihadist is Always Right

A third Internet café opened in mid-June to accommodate the many jihadists wanting to communicate with their relatives and friends at home via phone, email or chat programs. This prompted the owner of the first café to hang al-Qaida flags above his computers as a sign of loyalty to his customers. The move has improved business despite the growing competition. The heavily armed customers use Skype to tell their friends at home about what a paradise Atmeh is. The rents are cheap, they say, the weather and food are good, they can walk around with their weapons and, with a little luck, they can even find wives. In the evenings, the sound of several jihadists playing Counter-Strike spills into the streets in a cacophony of video game warfare. In Atmeh, the holy war is a costume spectacle, and everyone can feel as if he were part of it -- without suffering any harm. In August, a restaurant specializing in various national dishes for the international crowd of jihadists opened in Atmeh. Falafito has koshari for Egyptians, falafel for Saudis and chicken tikka for Pakistanis, to list just a few offerings.

Even local business owners are pleased about their fanatical clientele. The Syrian salesman in a mobile phone shop says: "A man from Dagestan comes here every few days. First he bought a Samsung Galaxy, a week later he bought an iPad, and then he bought a newer model of the Samsung Galaxy. He must have spent more than $1,000 (€740) here."

Why are the foreigners in Atmeh in the first place, asks an exasperated local commander with the Free Syrian Army (FSA)? "If they have come here to fight, then the front is that way," he adds, pointing east.

In fact, Atmeh is a transit station for jihadists who usually arrive at the nearby Turkish airport in Hatay. Some remain in the region, while others continue on to Aleppo, to the mountains of Latakia, to Rakka in the east, or to wherever the unclear front happens to be.

Some Syrian rebels team up with the jihadists, but many find the foreigners sinister. And even when the latter do fight against regime troops, FSA commanders are puzzled as to why commanders like Abu Omar al-Shishani, from Chechnya, aren't using the ammunition and anti-aircraft missiles they have obtained. Indeed, the FSA commanders fear the jihadists could use their weapons against Syrian rebels or even in terrorist attacks elsewhere in the world.

'We Can't Afford a Second Front'

"We hope that the jihadists leave again after (Syrian President Bashar) Assad has been overthrown," says Hassan Hamada, a former colonel in Syria's air force who made headlines a year ago when he defected to Jordan with his MiG-21. Hamada is now a member of the FSA leadership in northern Syria. "For now, we can't afford a second front," he says.

So, for the time being, they are fighting side by side, and jihadist and secular fighters still coexist. Shops in Atmeh sell music CDs, and women still wear trousers in the streets. This is because there is no power vacuum in Atmeh like the one there was in Iraq in 2003. Instead, there is a complicated structure of local councils, FSA brigades and moderate Islamists with whom the radicals must come to terms.

When the foreign fighters are asked about their plans, they only mention Syria as a stage. "First there is jihad here, until we achieve victory! Then we will liberate Iraq, Lebanon and Palestine," says a young Arab from the UK. Israel is no longer of paramount importance now that Shiites are seen as the real enemies. Although Shiites are also Muslims, the Sunni radicals believe they are worse than any infidel.

These are the kinds of things they say in Atmeh, but their influence is already fading in Daret Azzeh, a city 25 kilometers (16 miles) away, where the FSA thwarted the jihadists' efforts to assume power. Now the two groups work rotating shifts at checkpoints. But when the town council asked for help in repairing a water line, the jihadists merely shrugged their shoulders. "They want to take over half the world," says Ahmed Rashid, a lawyer and town council member, "but they would already fail in a small city."

Meanwhile, in Atmeh, the jihadists are practicing a way of life that existed in the days of the Prophet, albeit with such amenities as Facebook and Counter-Strike. Though unintended, the scene is reminiscent of the early days of Islam, after the death of the Prophet, when three of the first four caliphs grappled with rivals from within their own ranks. All the radicals in Atmeh want a theocracy, but this doesn't stop individual groups from constantly maligning each other, becoming rivals and occasionally starting feuds. In mid-June, there were at least five jihadist groups in and around Atmeh:

Al-Nusra is the murkiest of the groups, and it is in the process of disintegrating, at least in Idlib province, now that its leader, Abu Mohammed al-Golani, who has never appeared in person, swore allegiance to al-Qaida leader Ayman al-Zawahiri in April 2013. The rank and file in Syria have a low opinion of Zawahiri for several reasons. The Egyptian is not seen as particularly charismatic, and although he managed to have himself named the successor of former al-Qaida leader Osama bin Laden from his hiding place in the Afghan-Pakistani border region, he has failed to unite the terrorist conglomerate, allowing new groups to grow along its fringes.

In addition, jihadist pilgrims want a leader to call the shots. They want an emir in the flesh, someone who issues commands and delivers verdicts in person. But al-Nusra lacks such an emir. Even in their own propaganda videos, all that one sees of Abu Mohammed al-Golani is a figure with a tinny, distorted voice and pixelated face. Members often say that they know someone who knows someone who has met the emir, but that, upon closer examination, their stories often come to nothing. Several former al-Nusra members from Aleppo, Idlib and Damascus have said in recent months that no one has ever seen or even spoken with the man.

Besides, says a Syrian who left al-Nusra to join Dawla, the latter is "cooler." Members can smoke, he says, as long as no one is watching. This is an important competitive advantage in the chain-smoking Syrian rebel community. Cigarettes are normally taboo among the jihadists because "smoking drives away the angels and delays our victory," says the former al-Nusra member, quoting his local ex-emir.

While many of the Syrian al-Nusra members have gravitated to more moderate groups, the foreigners have joined Dawla, which has become the strongest group in the north.

But the most radical emir in the north has been Abu al-Banat, a former Russian officer from the Caucasus republic of Dagestan who converted to Islam and has gathered disciple-like supporters since then. Although he speaks only broken Arabic, he summarily declared al-Nusra and the other jihadists groups to be "kafirs," or infidels, because they refused to submit to his command.

In the spring, the self-proclaimed emir from Atmeh went with his supporters to the village of Mashad Ruhin, nine kilometers away, which he then sealed off with armed guards and transformed into his personal emirate.

Al-Banat had three men beheaded in the village square in April. In a video of the brutal execution, which appeared online in the summer, an unkempt man surrounded by a gawking crowd, including children, speaks into the camera in broken Arabic. The man is Abu al-Banat. Three bound men cower on the ground next to him. An assistant slowly cuts off the head of one of the men and then proceeds to the second man. Then he holds the severed head up to the camera like a trophy.

Oddly enough, the recently published video appeared first on Syria Tube. The PR site for the Syrian regime claimed that the beheading victims were three Christian priests who had been killed in late June in the town of Rassania. The story was promptly disseminated by the Catholic news agency Agenzia Fides, which has a history of broadcasting made-up horror stories.

What the video actually depicts is the murder of alleged Assad loyalists in al-Banat's camp in April, although who the three men were and what offences they committed remains unclear. As a former member of his group recalls, al-Banat "was both judge and accuser in one." The villagers were horrified, says a man from a nearby town. "No matter what the three men did, people aren't lambs to be slaughtered." The executions triggered an exodus, with only about 70 supporters remaining behind.

Apparently the other jihadists unanimously agreed that the beheadings had gone too far, and on the night of June 28, there was a rare instance of collaboration. A Chechen Dawla commander and a group of heavily armed men invaded Mashad Ruhin and declared al-Banat's reign of terror over. His remaining supporters surrendered without resistance, and al-Banat and two aides were taken away. All access routes had been sealed off during the attack by checkpoints of the FSA to prevent other jihadists from coming to the emir's aid -- but no one came.

The leaderless remnants of al-Banat's jihadist group reportedly packed their bags in the coming days and left the village.