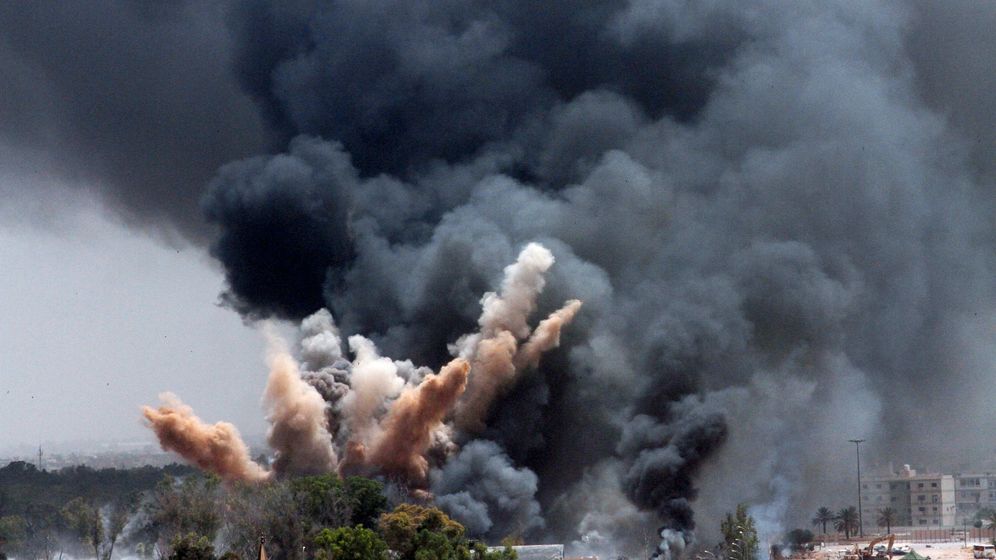 No one was paying much attention to the time, but it was probably a few minutes before 11 a.m. on Tuesday of last week when the action began in Tripoli, clearly visible from the windows of the Rixos hotel.

The morning hours are usually calm in Tripoli, and this too was a quiet, clear morning. Behind the tall trees in the adjacent park lies Bab al-Aziziya, the fortress-like headquarters of Libyan leader Moammar Gadhafi. The compound is as large as an entire city neighborhood and is surrounded by a massive wall, machine gun nests, barriers and watchtowers. It's a short walk from the hotel to Bab al-Aziziya.

Suddenly the first jet came screaming through the sky, but the noise it made was different this time: higher, shriller and much louder. Then the sound of loud explosions punctuated the air. The walls shook and the bombing continued unabated.

NATO jets were attacking Tripoli at low altitude for the first time. They came in waves separated by a few minutes. Then, around 2 p.m., they came a second time. They dropped 60 to 80 large bombs. Giant brown and black clouds of smoke rose into the sky on the other side of the park.

The bombing represents a new phase in the war over Libya, say NATO officials, who are trying to increase pressure on Gadhafi. They know that time is short, now that the Libyan leader appears to have his back against the wall. In Tripoli, it feels as if the NATO forces were now directly targeting the dictator, a man responsible for the deaths of so many people. In theory, however, Gadhafi can not be made into a target, because the United Nations resolution on Libya only permits the Western forces to engage in actions intended to protect civilians.

Meanwhile, a group of reporters from around the world are holed up in the five-star luxury of the Rixos, watching the hunt at close range -- in an atmosphere that couldn't be more bizarre, at room prices of €300 ($435) a night and dinner at $50 a person.

Some would call it perverse, the idea that journalists are spooning the foam from their cappuccinos in the hotel's outdoor bar while precision bombs rip apart bunkers and probably soldiers just beyond the nearby trees. But life at the Rixos and at Bab al-Aziziya follows its own rules. Gadhafi's people escort the reporters to the hotel, and guards are posted in the driveway to prevent them from setting out on their own. Anyone who wants to investigate the situation outside the hotel must do so in the company of a friendly government "minder." Of course, this makes it impossible to speak with rebels in the city.

Gadhafi only wants the foreigners to see the conflict from his standpoint, and his spokesman, Moussa Ibrahim, is responsible for enforcing his wishes. When Gadhafi appeals to the rest of the world, he usually does so through Ibrahim, speaking in a conference room at the Rixos.

Ibrahim is also staying at the Rixos, which happens to be the safest place for members of the regime. After all, NATO will hardly bomb a hotel filled with Westerners. Indeed, a member of the regime's propaganda machine jokes that Gadhafi himself is probably holed up in a bunker beneath the hotel, and there are even rumors that he could be staying in a separate wing of the building.

The reporters, in other words, are also human shields, protecting people like Ibrahim, who is staying on the same floor as they are, together with his German wife Julia and their nine-month-old baby.

The little boy cries once in a while, but no more frequently than other nine-month-old infants. The mother and son seem oddly disconnected from reality when Julia Ibrahim, a somewhat ethereal beauty -- a young, petite, very pale redhead -- walks across the polished marble floors, pushing her stroller, looking like Snow White in the midst of a war zone.

Ibrahim is a very busy man, as he wages his own war to the best of his ability -- the struggle for world opinion. He described NATO as the "forces of evil" last week, after Gadhafi, speaking in an audio message like a man in hiding, had angrily announced his intention to fight to the death. According to Ibrahim, there were 31 martyrs and many wounded after the NATO bombardment. "One feels the lunacy every day," he says, apparently referring to the supposed lunacy of the West, which he claims is unwilling to negotiate for peace. He actually says: "Give peace a chance."

The rest of Gadhafi's public relations contingent takes great pains to explain the suffering of the civilian population to the journalists, even though the regime has been unable to offer any evidence of serious civilian casualties to date. Most recently government officials, using the hotel's P.A. system, announced yet another chaperoned bus trip for journalists. This time it was to a Coptic church that had allegedly been bombed by NATO jets.

The pieces of material that had been hung around the church did a poor job of concealing a large military installation nearby, perhaps a base. The NATO bombs had destroyed the facility with such great precision that it was almost unrecognizable, while only a few brightly colored windows were cracked in the church.

Was the outing evidence of incompetence on the part of our minders? Or was it a subversive attempt to reveal the truth?

Even Mora, the sweet, cheeky nine-year-old daughter of the priest, knew the drill. As if quoting from a public relations script, she said that she had heard a loud boom in the night. But then someone asked what had been next to the church before the bombing. One might argue that this is not the kind of question children should be asked, that they shouldn't be drawn into something they don't understand. But the girl extended her finger -- as if to represent a gun.

Nevertheless, the head of the government's press contingent insisted that the bombed site had not been a military installation, and his helpers quickly ushered the reporters out of the church. It was like the opposite of a Potemkin village: The government representatives claimed there were no buildings on a site where buildings had clearly stood until very recently.

But if NATO ups the pressure on Tripoli, women and children could quickly be killed. The journalists sit together in small groups in the evening -- without any wine or beer, given that Libya is a dry country -- and discuss the survival prospects of the various factions.

The situation seems clear at first glance: The rebels are advancing on Tripoli from the east, they control Misrata, and NATO pilots, now flying Apache combat helicopters, have apparently used their firepower to clear a path for the rebels into the city of Yafran. And in the west, near the border with Tunisia, Berber tribes from the mountains near Nalut have also taken up arms against Gadhafi.

The news arrives from the west in bits and pieces. The rebels seem to be advancing and retreating, and the question is: Can the two rebel groups make it to Tripoli and encircle the capital? Then Gadhafi would have his back to the sea, where the NATO ships are waiting. And when will the rebels arrive?

And are the rebels inside the city waiting for those approaching it from the outside? Or will they make their move first? No one knows how strong they are and what weapons they have.

One thing is clear, however: There will be a terrible bloodbath if house-to-house fighting breaks out -- unless a bomb hits Gadhafi first.