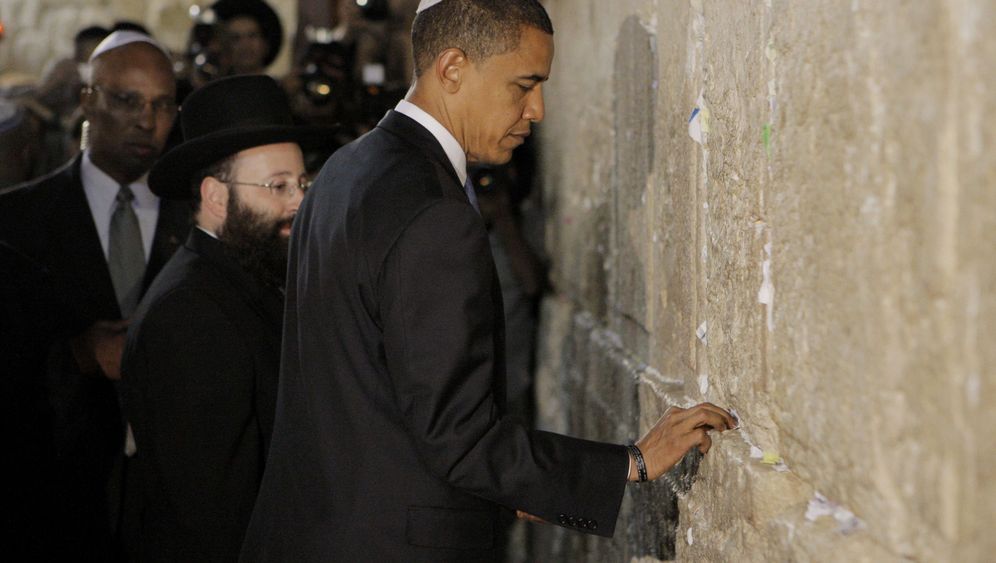 SPIEGEL: President Barack Obama is finally, for the first time in his presidency, headed to Israel. Why isn't he bringing along any new proposals to relaunch the peace process?

Nasr: The president's very first conversations about the Middle East, in the form of the Cairo speech in 2009, were focused on the Arab-Israeli peace process. It is not too late to revive it. But Obama has missed a great opportunity, and now the circumstances have changed. In 2009, President Obama thought that the most important issue in the region was the Arab-Israeli issue. It now has to compete with some other very important crises there. The question is whether this trip will be focused on that issue or whether Iran, Syria, Egypt, the Arab Spring will dominate the conversation.

SPIEGEL: In your book, you criticize Obama for losing his early momentum in the Middle East.

Nasr: Obama's fundamental mistake was to create expectation without intention to follow through. The Arabs came to think that the United States would really push on the settlement issue and push Israel toward compromises that they thought were necessary. On the other hand, the Israelis thought that Washington was pushing too hard, and therefore, both sides ended up disappointed.

SPIEGEL: A new government was just formed in Israel. Will it be more open to negotiations?

Nasr: If the United States does not want to lead, it does not matter whether there is a strong or a weak government in Israel.

SPIEGEL: But Americans strongly feel their country has been mired in wars in the Middle East for more than a decade. A majority of them want to focus on a pivot to Asia, or even "nation building" at home.

Nasr: American interests abroad do not take a holiday because you are having an economic problem. We end up with this false assumption that we can selectively pay attention to the Middle East when it suits us, or when our pockets are full of money. We know from experience that we do have vital interests there.

SPIEGEL: Is that still true? Thanks to modern technologies like fracking, the United States could become energy independent in the near future.

Nasr: This is not just about energy. Can the United States afford a broken Egypt and a shattered Syria? Can Asia itself be successful if the Middle East begins to melt down? What will happen to Europe if North Africa ends up being a series of failed states with al-Qaida across the border? We have gone from a period of being overengaged in the Middle East to being now underengaged.

SPIEGEL: What should modern American engagement there entail?

Nasr: We need to develop structures that would stand in place of the United States withdrawing. We did this in Europe after World War II. We have done it in Asia. But we have spent zero amount of effort in creating a regional political architecture that could potentially replace the role that we played in the region. We have told the Middle East very clearly that the United States no longer needs its energy, and thinks it can manage from a distance, like in a remote-control approach.

SPIEGEL: The changes after the Arab Spring, though, posed a tricky challenge to the United States. It had relied on alliances with dictators like Hosni Mubarak for decades.

Nasr: True. But the real issue is what we did after the dictators left. We assume that our engagement finishes at that point in time, whereas actually the job begins then. If you look at the way Germany thought about Eastern Europe, they had a broader vision about how you engage Poland, Hungary, and Czechoslovakia after the dictators went.

SPIEGEL: In Syria, you still have dictator Assad in place. Yet Washington has thus far failed to establish a rapport with the rebels.

Nasr: The conflict in Syria is no longer about democratization, it is a civil war. Syria is also not just a humanitarian disaster like Rwanda. The situation there is more comparable to the Balkan wars in the 1990s.

Nasr: In the Balkans, ultimately the United States took note and forced the Europeans and NATO to become engaged, saying that this is more than a humanitarian issue. That is the way we ought to think about Syria. Syria is not about Assad anymore. If Assad leaves tomorrow, there is no reason to think that the civil war will stop.

SPIEGEL: What does a successful transition plan look like?

Nasr: In the case of the Balkans, there was a contact group created. The members of that contact group -- the United States, the United Kingdom, Germany, France, Italy, Russia -- negotiated effectively to find a scenario they all could live with. They came to a set of understandings about borders, about division of power, about the shape of the final Bosnia-Herzegovina. Bosnia's objective was not regime change in Belgrade; it was to stop the violence. And yes, even in that war, we helped arm the Bosnians. We put sanctions on Serbia. We pressured Serbia to stop the violence, but we had a vision of why it is that the end of a conflict would be beneficial to Europe. And we did not get involved in Bosnia because of humanitarian concerns. We got involved because of the strategic understanding.

SPIEGEL: Do you see a shift in the Syria debates in Washington?

Nasr: The US policy is still catching up with others. Qatar and Saudi Arabia, even Turkey are much more engaged in the conflict than the United States. They understand it is of vital importance.

SPIEGEL: And Iran is particularly engaged.

Nasr: Basically everybody in the region on the good side and the bad side is "all in" in Syria. Every nation that is, but the US.

SPIEGEL: If the US government managed to settle that conflict, would that be the biggest blow to Iranian ambitions in the region?

Nasr: Iran would only get a blow if there was a very clear victory for the anti-Assad faction, and that does not look like it will happen.

SPIEGEL: Do Iranian leaders currently see themselves in a position of strength or weakness?

Nasr: They see themselves in a position of weakness, because the region has changed in unpredictable ways. They are in trouble in Syria. In Egypt, North Africa, Jordan, you have a rise of Sunni, anti-Iranian forces. But at the same time, they also see the United States in trouble. They think that Egypt and Syria are going to be a headache for the United States, that Jordan is vulnerable, that Libya and Tunisia and Algeria are going to be trouble.

SPIEGEL: Are the Iranians taking Obama's assurance seriously that all options are on the table -- even a military strike against Tehran?

Nasr: They do not think war is imminent, largely because the direction of American policy is very clearly to get out of the region. Starting a war with Iran means you have to forget about a pivot to Asia and come back in the region. We are threatening them, but everything about our policy does not suggest that we are really eager to go back to being very engaged in the region.

SPIEGEL: Could that lead to a compromise in the negotiations concerning Iran's nuclear program?

Nasr: Possibly. And that is why you saw much positive movement in the latest meeting of the "P5-plus-1" group in Kazakhstan. I do not think a deal with Iran is easy. There is too much lack of trust and also a lack of historic cooperation between the two sides. But there is room for movement, because the United States is clearly motivated not to get into the region, and the Iranians are also clearly motivated because the sanctions are hurting them and Syria is an unpredictable headache.

SPIEGEL: In your book, you say Obama's foreign policy is controlled by a small group of loyal advisors in the White House. Even heavyweights like former Secretary of State Hillary Clinton or AfPak-Special Representative Richard Holbrooke had a hard time getting around this "Berlin Wall" of advisors, as you call it.

Nasr: Under Obama, it has been difficult for professional diplomats to make the case for engagement and diplomacy, whether it is on Syria or Iran or on Afghanistan, Pakistan, or on Egypt. The larger problem is that the administration has come to view disengagement from the Middle East and a minimalist foreign policy as a good foreign policy. You can justify this in the context of economic problems at home or a pivot to Asia, but the reality is that just when the Middle East is changing, we are adopting a minimalist foreign policy that basically equates doing less with effectiveness.

SPIEGEL: This approach seems to work for Obama. He was re-elected partly because his foreign policy is perceived as successful.

Nasr: But only because we associated successful foreign policy with doing less, winding down wars and not starting new ones. If you are not doing anything, you have fewer headaches and fewer failures as well. But in reality, that does not speak to America's global leadership, nor does it really protect our vital interests down the road.