In an event that is no less than a political meltdown for United States foreign policy, reporting on 251,287 leaked American diplomatic cables, many classified as secret or confidential, will be published this Monday in Germany by SPIEGEL and SPIEGEL ONLINE.

In the documents, which were leaked to the whistleblowing platform WikiLeaks, US diplomats stationed across the globe report back to the State Department in Washington, communicating sensitive information about international arms deals, evaluating political developments or assessing the corruption level of local leaders.

The compendium of reports, most of which cover the period from 2003 until the end of February 2010, sheds light on America's at times arrogant view of the world. Never before have so many political revelations embarrassed the US State Department in one fell swoop.

Reaction from the US Government

In a statement, the White House has condemned the publication of "private diplomatic discussions" with foreign governments by SPIEGEL and four other international media on Sunday. Click on the link below to read the statement in full.

We anticipate the release of what are claimed to be several hundred thousand classified State Department cables on Sunday night that detail private diplomatic discussions with foreign governments.

By its very nature, field reporting to Washington is candid and often incomplete information. It is not an expression of policy, nor does it always shape final policy decisions. Nevertheless, these cables could compromise private discussions with foreign governments and opposition leaders, and when the substance of private conversations is printed on the front pages of newspapers across the world, it can deeply impact not only US foreign policy interests, but those of our allies and friends around the world.

To be clear -- such disclosures put at risk our diplomats, intelligence professionals, and people around the world who come to the United States for assistance in promoting democracy and open government. These documents also may include named individuals who in many cases live and work under oppressive regimes and who are trying to create more open and free societies. President Obama supports responsible, accountable, and open government at home and around the world, but this reckless and dangerous action runs counter to that goal.

By releasing stolen and classified documents, Wikileaks has put at risk not only the cause of human rights but also the lives and work of these individuals. We condemn in the strongest terms the unauthorized disclosure of classified documents and sensitive national security information.

In one cable, the US ambassador in Moscow clearly describes the rivalry between Russia's two leaders, President Dmitry Medvedev and Prime Minister Vladimir Putin, with the former being described as "pale and hesitant" and having "none of the bravado" of the latter.

In another, US diplomats reveal that the attempt to persuade different countries to accept Guantanamo inmates turned into a downright bazaar, with offers of accepting prisoners being made in exchange for development aid or a visit by President Barack Obama.

In yet another cable, American diplomats in East Asia reported about members of the Beijing leadership who had grown sick and tired of the escapades of their North Korean ally Kim Jong Il and who could conceive of reunification under the control of South Korea.

The State Department's emissaries abroad cultivate a clear-eyed view of the countries they are posted to, a view that is at times incredibly dark. Viewed through the eyes of the US diplomats, entire states -- Kenya for example -- appear as mires of corruption. If one were to believe the gloomy reports from the embassy in Ankara, Turkey is on a slippery slope to volatile Islamism, spurred on by the narrow-minded government of Prime Minister Recep Tayyip Erdogan, who is portrayed as being reliant on a group of incompetent advisers.

Even the leadership of a close ally such as Germany emerges in a poor light in the cables. The members of the ruling government coalition in Berlin denigrate each other in comments to the US ambassador to Germany, Philip Murphy. For example, Defense Minister Karl-Theodor zu Guttenberg tattled on his colleague German Foreign Minister Guido Westerwelle, telling the US ambassador that Westerwelle was the real barrier to the Americans' request for an increase in the number of German troops in Afghanistan. And the US diplomats are rather cool in their assessment of Chancellor Angela Merkel: One dispatch describes her as risk-averse and "rarely creative."

Sometimes the US embassy activities seem to go beyond the requirements of diplomacy. Secretary of State Hillary Clinton demands of members of her diplomatic corps that they prove their worth as spies. The embassy staff are asked to acquire any accessible personal details of UN staff, including credit-card numbers and frequent-flyer customer numbers.

The most explosive documents are those that describe developments that relate to major global crises. In the Middle East, the US diplomats report, it is not just the Israelis who fear Iran's nuclear ambitions. No one speaks quite as angrily about Tehran as the Arabs, who want most of all for the US to supply them with weapons.

When it comes to Pakistan, the US never quite knows if it is dealing with an ally or an enemy in the war on terror. The diplomats repeatedly report on political or military links between the Pakistanis and the Afghan Taliban.

And, in Yemen, the US allowed itself -- against its better judgement -- to be drawn into President Ali Abdullah Saleh's conflict with the Houthi in the north of the country, even though their military aid was only supposed to be used in the fight against al-Qaida, which is particularly active in the country.

The State Department, which has described the cables as "diplomacy in action," is extremely annoyed that the reports are being released. The Americans share some of the blame, however. In order to improve the flow of information between different officials, the State Department created its own computer network for classified documents, one that 2.5 million US citizens had access to. The leaking of the diplomatic cables was an accident that was waiting to happen. 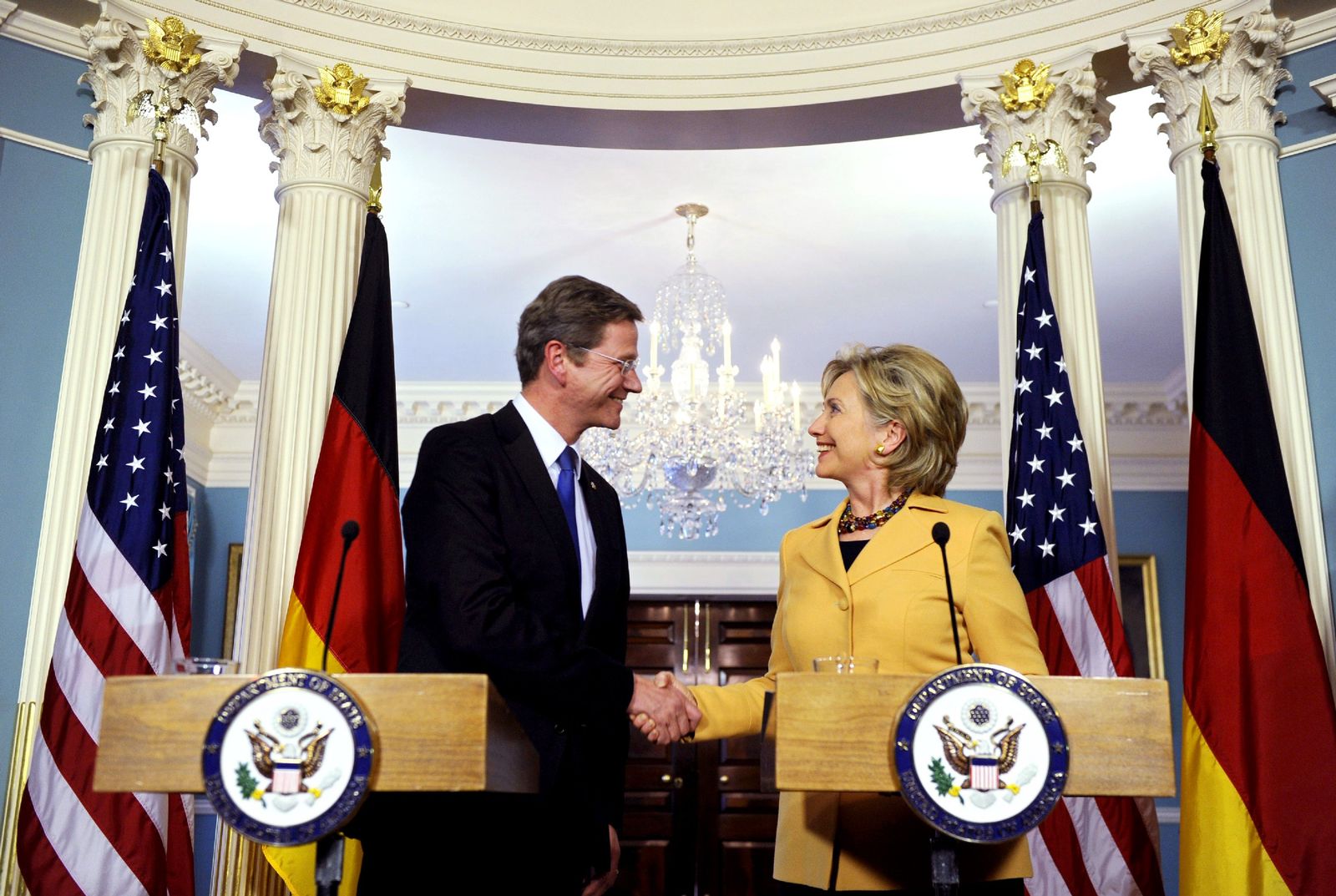 US Secretary of State Hillary Clinton and German Foreign Minister Guido Westerwelle at a press conference at the US State Department in November 2009: The leaked cables are likely to put pressure on the US's relations with Germany, among other countries.