What do a counterfeiter from Syria, an Iraqi-Afghan militia fighter under Iranian leadership and a Russian Cossack have in common? More than you might think. They all took part in a strange offensive involving around 300 men on Feb. 7 -- an attack force that was bombed by the U.S. as it crossed a pontoon bridge over the Euphrates River in an effort to capture one of largest natural gas fields in eastern Syria for the Assad regime. Located near the city of Deir ez-Zor, the so-called Conoco field had been wrested from Islamic State (IS) last September by Kurdish-led troops -- with the help of U.S. Special Forces who have been stationed in the area since then.

It's a confusing story, but it says a lot about the increasingly bewildering and dangerous state of affairs in the Syrian war. The advance on the Conoco field, during which around 100 of the attackers are thought to have lost their lives in the American airstrikes, is just one of several clashes between military forces in the country. Indeed, Syria has become a battleground for global and regional powers -- including the United States, Russia, Turkey, Iran and Israel -- who are using the country as a venue for the pursuit of their own interests. The danger of an unintended clash has become extreme. And the conflict has become even more difficult for outsiders to understand.

The various international parties to this war have all, almost simultaneously, launched massive attacks in the past few weeks. For much of the last 28 days, the Turkish army has been attacking the Kurdish militia YPG in the northern Syrian city of Afrin. And the Israeli air force launched a wave of airstrikes, which, it says, destroyed half of all Syrian anti-aircraft capability, after one of its warplanes had been shot down during a response to an Iranian drone incursion on Israeli airspace.

Then there was this mysterious clash near the natural gas field, which some reports have depicted as the deadliest encounter between Russian and American troops since the end of the Cold War. Russian mercenaries were reportedly found among the dead, with some sources claiming that up to 200 Russians lost their lives. Local sources from the main military hospital in Deir ez-Zor indicate the death toll was likely between 10 and 20.

The intervention of foreign powers in Syria is by no means new. But the current intensity of their conflicts can be largely traced back to a single source: Their joint enemy is gone. Since fall 2014, all powers could agree that Islamic State was the primary target. And even if there was room for doubts regarding the sincerity of Russia and Turkey, the fight against IS served to unite all involved.

Securing a Slice of Syria

Now, though, IS has been defeated and its "caliphate" has been reduced to a couple of tiny specks and some territory in the desert. But peace has not been the consequence. In hindsight, IS wasn't just a monstrosity, but also a pretext. The fight against the Islamist extremists was constantly fueled by the intention that liberated territory could become part of one's own sphere of influence. It allowed everybody to secure a slice of Syria.

The anti-IS coalition brought U.S. troops into the country and made the Kurds in northern Syria powerful. They now control a quarter of the country and would like to keep it that way. Turkey, though, would like to prevent the Kurds from retaining that territory. When Kurdish-led troops last September advanced further and further to the south, the U.S. military flew them in helicopters to the area around Deir ez-Zor to prevent anyone else from occupying the oil and gas fields there. Now, the U.S. wants to use those same Kurdish troops that it outfitted for the fight against IS to block Iranian advances in Syria.

And of course, every foreign power is interested in keeping its own losses as low as possible -- which is why numerous military subcontractors and militias have been recruited to take care of the messy ground combat.

The Americans are using the Kurds to promote their own interests and the Turks, in addition to their own soldiers, are using anti-Assad rebels to fight on their behalf. Iran, meanwhile, has a diverse mixture of Iraqi, Afghan and Pakistani recruits under its command, in addition to its own people. Since 2013, the tens of thousands of troops under Iranian control have been propping up the regime of Bashar Assad. They are commanded, trained and financed by the Iranian Revolutionary Guard, which wants to keep its Syrian ally in power at any price. One of these multinational Shiite militias was also involved in the attack on the Conoco gas field -- a collection of fighters straight out of a dystopian catastrophe film.

Two local tribal militias also took part in the attack, including one controlled by counterfeiter Torki Albo Hamad. Once wanted in Qatar for murder and document forgery in Saudi Arabia, he was known in Syria for being the leader of a gang of highway robbers. In 2013, Damascus offered him money and impunity if he and his men would place themselves at the service of the regime.

But Russian mercenaries were also involved, including a 51-year-old Cossack, who posed for a photograph ahead of the fight with a medal and raised saber. The unit, known as the Wagner Group, was apparently hired by a group of Syrian businessmen.

Several different conflicts are currently being fought on Syrian territory and there is no indication that the violence will end any time soon. The international community has consistently demanded a negotiated solution, but the appeals have been little more than empty words -- and they have encouraged those involved to take militarily whatever they want.

It all began with Assad preferring to destroy the entire country rather than giving up power, which is why he wanted a war for all of Syria. But his regime was too weak for such a fight, which made him dependent on Russian and Iranian support - and on the Kurds remaining on the sidelines. The result has been a form of chaos for which standard terms are insufficient. Words like "allies" and "adversaries" have long since lost meaning. The relationship among the Russians, Kurds, Iranians, Kurds, Turks and Americans, along with Assad-regime supporters, has been characterized by hostility in some regions of Syria and cooperation in others.

The escalation east of Deir ez-Zor served admirably to highlight these shifting alliances, though the situation developed differently than planned. Indeed, several sources have confirmed that prior to the fighting, an arrangement had been reached between the Kurdish-dominated Syrian Democratic Forces (SDF), the Russians and the Assad regime.

According to the deal, the SDF was prepared to voluntarily withdraw from the region surrounding the gas fields and allow government troops to replace them. In return, the Russians would close the airspace over Afrin to the Turkish air force and Assad's forces would finally allow Kurdish reinforcements to pass through government-held territory to Afrin from isolated Kurdish-held regions in the east.

In other words, the deal involved the Assad regime gaining territory in the east in exchange for helping out the Kurds in the north in their battle against the Turks.

Turkish airstrikes on Afrin did, in fact, cease as of Feb. 4, with Moscow having closed the airspace to the Turks. In response, Turkey suspended its offensive, because without prior bombing from above, the military was unwilling to advance on Kurdish lines, defended as they are with concrete and bunkers. In the days that followed, a convoy of around 200 buses, trucks and pick-ups arrived from the eastern Kurdish areas in Afrin, loaded with fighters, ammunition and Iranian-produced weaponry.

But when it came time to implement the second part of the deal pertaining to the gas fields in eastern Syria, something went wrong.

A Syrian opposition website took the step of reporting that Assad's units were preparing to storm the natural gas field and claimed that the SDF had informed the Americans of the coming onslaught. But the U.S. did not stand by silently, instead scrambling its bombers. Did the Kurds actually fail to alert the Americans, so they didn't have to live up to their end of the bargain? Or did the Pentagon choose to ignore the deal its allies had negotiated?

Moscow, in any case, was clearly extremely displeased with the Kurds. Just one day after the failed attempt to occupy the natural gas field, the Russians lifted the no-fly zone over Afrin, whereupon Turkey renewed its attack on the Kurds in the city -- with ground troops taking five villages soon thereafter.

The article you are reading originally appeared in German in issue 8/2018 (February 17th, 2018) of DER SPIEGEL.

The fact that several Russians were killed in the American firestorm completed the chaos. Immediately after the attack, after all, the U.S. repeatedly insisted it had been in contact with the Russians both prior to and during the operation to avoid a collision. Moscow did not deny the assertions. The Russian Defense Ministry later issued a statement saying that the fighters had advanced "without permission" from the military. But did they attack entirely without Moscow's knowledge? That seems unlikely.

The fact that conflict between rival powers is now breaking out openly isn't the only new development. The regime's two allies also appear to be heading for disagreement. Russia and Iran both want Assad to emerge victorious, but the closer that victory comes militarily, thanks to Russian airstrikes and Iran's militias on the ground, the more clearly it has become that the two sides have competing notions of what to make out of that victory.

Moscow wants a "Pax Russica" and the corresponding foreign policy dividend: Namely that of finally replacing Washington as the most important actor in the Middle East. But in order to achieve that goal, peace is ultimately necessary, because protracted violence could become unpopular back home.

Iran's Revolutionary Guard, by contrast, wants lasting control of Syria and to transform it into the next bridgehead in the Shiite expansion. Indeed, it is already working to convert Sunni Syrians to Shiite Islam and buying up real estate and factories. That might not be in Russia's best interests, but without Iran, Assad wouldn't stand a chance. And that would be the end of Moscow's hope of one day pacifying the country under Assad's rule.

Indeed, those in the West insisting on noninterference are right in a sense: There is no military solution to this war. Not one, at least. But several. And in the end, none of them will save the country. 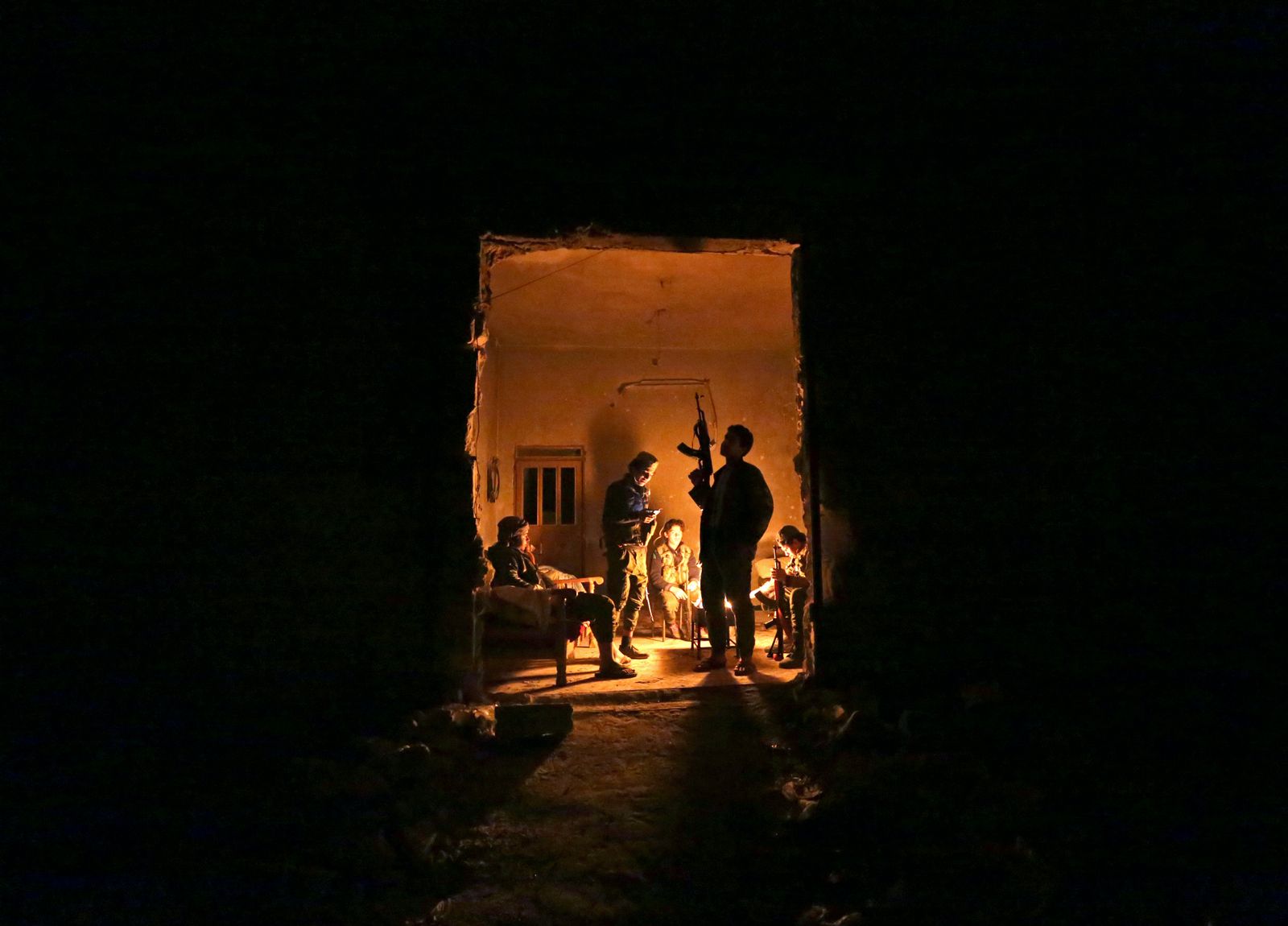