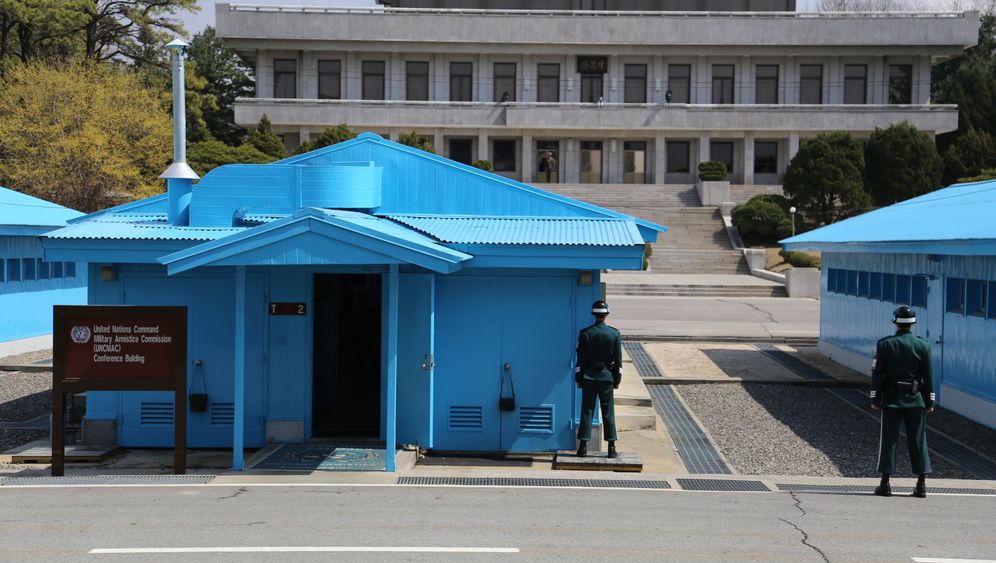 Photo Gallery: Thrill Seeking on the Border with North Korea

Richard and Betty Podol have arrived at the border of enemy territory wearing tracksuits. In front of the retired couple from Virginia, South Korean and American soldiers stand as still as wax figures.

The blue barracks in Panmunjom, through which the Military Demarcation Line between North and South Korea runs, glisten in the background under the bright sunlight.

"It is so peaceful here," says Richard Podol, 84, as he gazes dreamily at them.

Sixty years before, when he was responsible for supplying food to the troops on the front, the war veteran could hear the artillery fire from his base in Seoul. Today, only the voice of the tour guide rings out. "Two rows please, two rows. Photos only of what is in front of us, not of the buildings behind us."

Thirty international tourists walk lock-step into the barracks in which the end of the Korean War was negotiated 60 years ago. They have 10 minutes to look around and take pictures before the tour guide says in a shrill voice: "We need to go. We need to go."

On the other side, where the North Korean soldiers are standing, is another group of international tourists. Who is allowed to bring whom into the barracks, and when, is a clearly defined ritual. And it is working as well as ever, even though the North Korean dictator Kim Jong Un is threatening the United States with nuclear attack and has suspended work at the industrial zone in Kaesong, which was the last joint project with South Korea.

Before the tour bus even turns the corner, the soldiers in front of the barracks clear their posts, making room for their North Korean counterparts, who lead their visitors through their own routine.

A tour from the south of the "most dangerous border in the world" costs the equivalent of €80 ($105). At tension-filled times, the tours attract an especially large number of adventure-seeking tourists. It's a good thing that the barracks were just freshly painted.

The tour bus in which 63-year-old Leland Sakai is sitting is almost completely booked. "My friends in the US said I am crazy and should just keep my head down," says the retired teacher from Colorado. But now is the most exciting to come here, he says. "I already have most of my life behind me," he jokes, smile lines spreading out across his face.

It doesn't look like Sakai should have anything to fear. "Everything is the same as always, ma'am," says a US soldier named Cody. The 27-year-old is good-looking, clean-shaven and well-spoken. He and the other photogenic soldiers lead four to eight groups of tourists through Panmunjom each day. Sometimes Cody hears an explosion in the distance, likely another wild boar or deer stepping on one of the mines that lie buried in the demilitarized zone. But the soldier from Oregon says no one here is nervous because they don't think Kim Jong Un would risk starting a war that would almost certainly cost him his power.

In light of these calming words, the nervous behavior of Jeongwon, the 35-year-old tour guide, seems all the more bizarre. She repeats everything that is forbidden loudly and at least twice in her portable microphone. By evening, she will be hoarse. "You cannot take pictures here! You cannot take pictures!" And, of course, no one is allowed to wave their finger in the direction of North Korea.

It is not only an issue of adhering to the decades-long routine that the two enemy Koreas have at the 38th parallel. It is also about Jeongwon's license. She says all tour guides are regularly evaluated by the military command at the border, and those who don't have control of their tourists lose their permit.

But, on this day, everything moves smoothly. For the first time in 60 years, the veteran Richard Podol visited the place where, as a young man, he made many "educational and unsettling" memories. During the visit, he even ventured into a secret North Korean tunnel. "He couldn't hold himself back," says his wife, Betty. "I almost had to carry him back up."

Sakai, the retired teacher, will be flying home with the feeling that war is not as imminent as the US newscasters have been saying. "I will tell my friends: 'Come here and see for yourselves what things really look like in Asia," he says, beaming.

Meanwhile, Jeongwon, the tour guide, is sitting in the front of the bus, sucking on a throat lozenge.