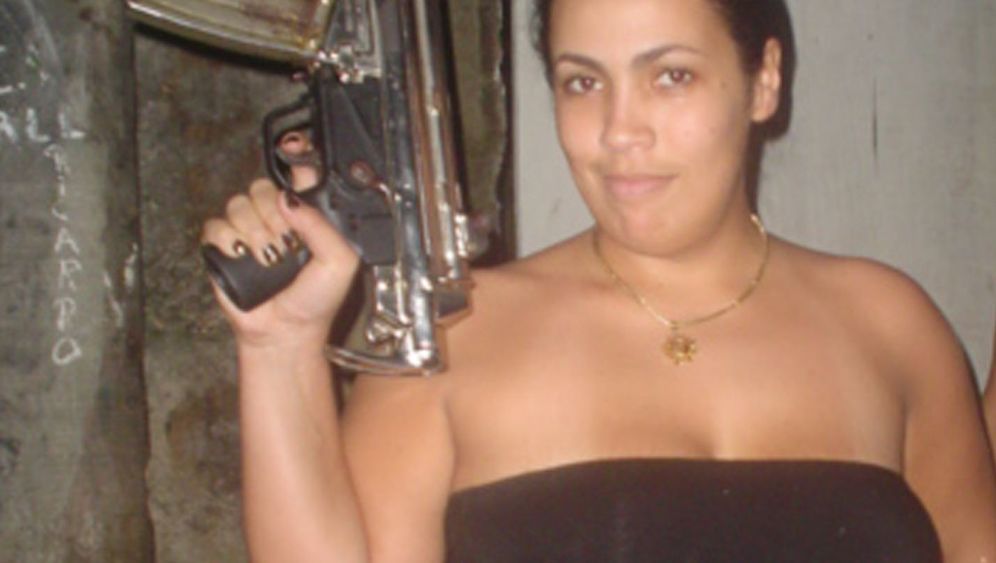 They called her Bibi Perigosa in Rocinha, the largest favela in Rio de Janeiro. Bibi the Dangerous. She counted the money that her drug lord husband brought home, usually in bags -- about €270,000 ($345,000) a week. She was there when his gang bought automatic weapons from Paraguay, and she listened to his stories about how thieves and traitors were burned to death. When she found out that her husband had a mistress, she demolished the mistress's beauty salon.

She once had her picture taken with a gold-plated submachine gun. Another photo shows her embracing her husband, who has pistols and hand grenades stuck in his waistband.

But those days are gone. Today Bibi Perigosa is just Fabiana Escobar, her real name. Her ex-husband has been in prison for five years, and she barely manages to make ends meet. But instead of keeping quiet, she is speaking out about her experiences -- in part because she wants other women to have a better life. There are thousands of young girls in Brazil's slums who are intoxicated by the power, money and status of the drug lords. The role of women in the gangs is underestimated, says former police inspector Marina Maggessi. In fact, she adds, they are an important part of the organization, and are increasingly used as inconspicuous couriers.

In Rio alone, the number of female prison inmates increased by 66 percent between 2007 and 2012. Currently more than 1,700 women are incarcerated in the entire state of Rio de Janeiro, mostly for offences related to the drug trade.

Dark steps lead up to Escobar's house. In the past, the drug gangs' scouts used the rooftop terrace to keep an eye out for the police and rival gangs. The living room is furnished with pink imitation leather furniture and a makeup mirror, and a pit bull puppy is chewing on a stuffed animal on the red sofa.

Escobar, 35, is wearing a denim skirt, a blouse and black leggings. There are still tattoos on her arms expressing her love for her ex-husband, Saulo de Sá Silva, 37. He was long the right-hand man of Rio's most-feared drug lord, Antônio Francisco Bonfim Lopes, known as Nem. Nem controlled Rocinha, and Saulo de Sá Silva was his deputy. With his dark hair, soft face and glasses, Sá Silva doesn't look anything like a cocaine baron.

Bibi was married to Saulo, the coke baron, for 15 years. The relationship began like so many others, with plenty of love and little money. She was 17 and wanted to become a social worker, and she dreamed of having children and a little house. He was a 19-year-old mail carrier who wanted to get rich as soon as possible. So he became a drug dealer. According to the police, Sá Silva also delivered drugs along with the mail. He went to prison eight years ago, but after a few days he had sawed open the ventilation grille in his cell and escaped. The family, which had since come to include two children, found refuge in Rocinha, where Sá Silva was on good terms with the local drug lord.

There the couple entered the big leagues in the drug business, and it was there that Fabiana became Bibi Perigosa, the gangster's wife. Her husband managed the business and she helped with the books. "It was almost like working in a normal business," she says.

Rocinha was Nem's private kingdom, a city within the city, a giant labyrinth of colorful shacks and houses clinging to the hillsides like honeycombs. More than 80,000 people live in Rocinha, between the beach and the jungle, one of Rio's most beautiful locations.

Nem's gang was called "Amigos dos Amigos," or Friends of Friends. It consisted of 500 armed men, many of them little more than children. He provided half of Rio with cocaine and decided who was to live and who was to die. There was no police or military presence in the favela, and all power was in the hands of Nem's people. When a resident was robbed, he appealed to the drug lords for help. "When a boy stole a fan, he was punished by having gasoline poured over his hand and lit on fire," says Escobar. "Then they gave him a bucket to put out the fire." But the bucket was filled with more gasoline.

Bibi Perigosa was the queen of this realm. She bought gold jewelry, clothing, a flat-screen TV, a beach house and a car. She rented a helicopter to drop rose petals over the favela for her husband Saulo. During parties in the favela, known as Baile Funk, the main purpose of which were to stimulate drug sales, she sat enthroned in her box high above the dance floor and had grilled crayfish and champagne delivered from expensive restaurants. Saulo bought an expensive motorcycle, which they drove at high speeds through the narrow streets of the favela at night.

The other drug dealers also lived opulent lives. They bought the latest fitness equipment from the United States, and they had swimming pools and home movie theaters built. Drug lord Nem kept a small private zoo with toucans, monkeys and alligators.

But now the war is over and the kingdom lost. Rocinha was pacified. In November 2011, soldiers and police occupied the district. They had announced their imminent arrival so as to avoid fighting, and not a single shot was fired. Then they raised the Brazilian flag, as if to announce: "We have the area under control." A few months ago, the governor opened a police station at the top of the hill and had 80 surveillance cameras installed. Now some 700 police officers patrol the neighborhood day and night.

By next year's soccer World Cup, the government plans to recapture a total of 40 strategically significant favelas. Rocinha was number 28 on the list. It is a daring game with an uncertain outcome, but the strategy seems to be working so far. Murders and muggings have declined drastically, the pacified slums are flourishing and the real estate market is booming. There were 4,041 murders in the entire state of Rio de Janeiro last year, the smallest number since 1991.

But the drug trade continues, mostly by telephone. Many former drug lords are now in prison. Nem fled from Rocinha in 2011, but he was arrested during a roadside check in an upscale neighborhood. He had been hiding in the trunk of a car with fake diplomatic plates. "The police took away his environment," says the former drug lord's wife. The members of his gang scattered, some going to favelas that had not been taken over by the authorities, while others switched to legal jobs or car theft. "Without the favelas, the gangsters are like fish out of water," says Escobar.

A thief stole her motorcycle. Corrupt police officers stole the gold jewelry when they searched her house. The flat-screen TV disappeared, the car became rusted and the beach house was sold for too little. Sá Silva is in the Bangu prison in the western part of the city, where Rio's most dangerous criminals are incarcerated. She visited him regularly at first, taking a minibus to the prison on Thursdays with the other wives of drug lords.

"The truth is that we led a miserable life," says Escobar. "I was always on guard and always running away from something." Sá Silva was never able to leave the favela. "Once he stood on our rooftop terrace, looked out at the sea and wept. The beach was so close and yet unattainable."

When the wives of drug lords don't end up in prison themselves, they often become lonely and bitter. Their husbands find mistresses, are killed in gun battles or are arrested. But Escobar doesn't want to become bitter. Instead, she wants to take revenge on her ex-husband, the coke baron.

She recently rented a room at a motel and danced half-nude in front of a webcam, so that everyone could see her on the Internet. "That was how I made Saulo look like a fool in front of his friends." Most of all, however, she is exacting revenge by talking about the drug lords' business.

She describes how Saulo set up an electronic bookkeeping system and prohibited the dealers from drinking alcohol while selling drugs. The social networking site Orkut was used for communication. According to Escobar's account, couriers brought the coca paste from Bolivia and Paraguay, and Saulo set up laboratories where the raw paste was processed into cocaine. The gang was soon supplying the drug to dozens of favelas. "Rocinha became a central market for cocaine," says Escobar, who insists she never took drugs herself. "For us it was just a business." She doesn't see herself as an accomplice. "I supported Saulo because he was my husband," she says.

On the Road to Redemption

Escobar says they abhorred violence -- a questionable claim given the many weapons the couple owned, including a bazooka, automatic weapons and assault rifles. They were constantly on the lookout for the police or enemy drug gangs. Five bodyguards were posted at her door when Escobar slept, yet she was still startled by any sudden noise. "We had spies who told us when the police were planning a raid." On one such occasion, she escaped across the rooftops while police officers raided her house.

"We wanted to accumulate as much money as possible in a short amount of time, so that we could build a new life for ourselves," she says. Saulo promised her that they were almost there, and told her: "Start looking for a house on the beach." She bought an oceanfront villa in the northeast, but the police knocked on the door only a few days later. "I had to provide my tax number to buy the house, and that's how they found us," says Escobar.

Sá Silva was arrested, while Escobar was questioned and then released. A dealer offered her a job developing a cocaine laboratory, but she turned him down, determined not to have anything to do with illegal drugs anymore.

She opened a boutique instead, but people don't have as much money as they used to, when the drug trade was still flourishing. She closed the shop and leased the premises to a beauty salon. The shop is currently being renovated, but the old name, "Danger Girls," is still displayed above the entrance.