DER SPIEGEL: Ms. Del Ponte, in your book, the world of 2021 sounds a lot like a jungle, in which the strongest prevail. Why is that?

Del Ponte: The world is still dependent on the will of the strongest countries. It was only possible to establish an international criminal justice system because the U.S. and Russia supported it. Unfortunately, this political will has evaporated.

Carla Del Ponte, born in Ticino, Switzerland, in 1947, was a public prosecutor in her home country before becoming chief prosecutor for the International Criminal Tribunal for the former Yugoslavia (ICTY), a role she also held for a time in the International Criminal Tribunal for Rwanda. During her time at the ICTY from 1999 to 2007, she prosecuted Yugoslavian war criminals on behalf of the United Nations, including former Serbian President Slobodan Milošević. Until 2017, she was part of a UN commission investigating human rights violations in Syria.

DER SPIEGEL: You managed to drag some of the worst war criminals of the 20th century into court. What impression did these men make on you?

Del Ponte: Nothing special really. They’re just normal people, unfortunately. I would like to have seen them as monsters, but they aren’t. One thing they do share is a belief that the end justifies the means.

DER SPIEGEL: Former Serbian President Slobodan Milošević is one of the men you prosecuted. When you met him, did anything about him surprise you?

Del Ponte: The only thing that surprised me was the way he questioned witnesses during the trial. Many of them still saw the president in him and were cowed. He even got some of them to withdraw their testimony.

Del Ponte: Our judges were, of course, extremely accommodating with him. "Mr. Milošević, how are you? Did you sleep well? Do you feel well enough to answer some questions?” When I was in the courtroom, I had the thousands of victims in my mind. Milošević defended himself, which gave him the opportunity to hold his political speeches in court. After two years, we had almost reached the end of the trial. I swore to myself: Starting on Monday, I will say what has to be said. And then the news arrived that Milošević had died in his cell.

DER SPIEGEL: Once the trials ended, did you feel like you understood these people a bit better?

Del Ponte: We understand what led them to spread ethnic hatred. But these culprits never expressed remorse or introspection. They never understood that what they did was wrong, even though they were arrested and convicted. They postured as heroes. That’s why I was consistently in favor of long sentences, so that they would have time to recognize their culpability.

DER SPIEGEL: Was it particularly meaningful for you, as a woman, to prosecute these men?

Del Ponte: Not in The Hague. But it was different when I was a public prosecutor in Ticino. I remember that we once arrested a mafioso and it was up to me to question him at the police station. When a police officer pulled a revolver out of the drawer, the mafioso winked at me and said: "Dottoressa, if I had known about the weapon, you and I would already be on our way to Naples as a couple.”

DER SPIEGEL: You write in your book that you were criticized for focusing more of your attention on the Serbian offenders.

Del Ponte: Of course, because the Serbs committed more crimes than the Croatians or the Kosovars.

DER SPIEGEL: Is that true?

Del Ponte: it is true that the international community, NATO, had proof of the crimes committed by the Serbs, and they provided that to us, which made things move faster. But it is also true that the U.S. didn’t want us to scrutinize war crimes in Kosovo, for political reasons. We had a lot of trouble investigating the KLA, the Kosovar militia, because the U.S. slowed us down.

DER SPIEGEL: Did U.S. politicians tell you explicitly not to investigate the Kosovars?

Del Ponte: No, because then I could have complained in public. But Madeleine Albright, who was secretary of state at the time, told me over the phone: Carla, slowly, slowly. Be careful with (former KLA leader Ramush) Haradinaj, otherwise there will be unrest in Kosovo.

Former Serbian President Slobodan Milošević in court at The Hague.

DER SPIEGEL: You were self-confident enough to pay little heed to what world leaders expected of you.

Del Ponte: Of course. And they also knew that when they told me to do something, I would do the opposite. And the statutes make it absolutely clear: The chief prosecutor is independent.

Del Ponte: International justice can only work if it is backed by political will. If that political will is lacking, there isn’t much you can do.

DER SPIEGEL: How is that expressed?

Del Ponte: You never know exactly what the motivations are for hindering an investigation, but they were there. An example: NATO was present in Yugoslavia and could easily have arrested (Bosnian Serb leaders Radovan) Karadžić and (Ratko) Mladić, but they didn’t. And yet the Yugoslavia Tribunal was ultimately successful anyway.

DER SPIEGEL: A lot of people thought at the time that an international criminal justice system was emerging.

Del Ponte: Yes, that’s what we thought – fantastic. The Yugoslavia Tribunal was a success, Rwanda was as well, even though some suspects were still at large. And then came the permanent criminal court, and we thought: We have finally made it. There is an international jurisdiction, and it will have a preventative effect. But within just a few years, it started going downhill.

DER SPIEGEL: Do you have an explanation for what happened?

Del Ponte: It mostly has to do with Russia and the U.S. It was primarily thanks to these two countries that the international justice system emerged in the first place. But as soon as these two countries lost interest in it, particularly the U.S., it was a signal.

DER SPIEGEL: Is international justice always the justice of the powerful?

Del Ponte: At the moment, that is unfortunately the case. Founding the International Criminal Court was a huge step. But that alone isn’t enough. You also need people who represent it with self-confidence.

DER SPIEGEL: A lot depends on who occupies the position of chief prosecutor?

Del Ponte: Of course. UN Secretary-General Kofi Annan, who knew me from Davos, realized that I never let up, that I keep digging. For that reason, those in power ultimately had to listen to me. That was the case with (former German Chancellor) Gerhard Schröder. It took awhile before I was able to get a meeting with him, but then he became one of my most important allies in the arrest of Milošević.

DER SPIEGEL: You were the target of several attacks and received numerous threats. Were you afraid?

Del Ponte: Over time, I grew used to the danger and to life under police protection.

DER SPIEGEL: As a public prosecutor in Switzerland, you worked closely together with Giovanni Falcone, the legendary Italian mafia prosecutor who was murdered in Sicily in 1992.

Del Ponte: Two years before that attack, I was with him in Palermo to question a mafioso. Afterwards, Falcone invited me to go to the beach, but I wanted to take a look around the city instead. That saved our lives, because the mafia had planted a bomb at the place we had intended to visit.

DER SPIEGEL: In your life as a prosecutor, what was your principle motivation?

Del Ponte: My focus was attaining justice for the victims. Victims’ families can only find closure when some form of justice is reestablished.

DER SPIEGEL: The lesson that many despots seem to have learned is that they must only rule with a hard enough fist in order to remain in power.

Del Ponte: Which makes it all the more important that the chief prosecutor in The Hague brings Syrian dictator Bashar Assad into court, for example. If there was an international arrest warrant for Assad, he could no longer leave his country. That was the case with Milošević. And there was, of course, a UN investigative commission for Syria. If I was still chief prosecutor in The Hague, I would immediately request access to the evidence this commission collected against Assad. As chief prosecutor, you have to be active. Otherwise, nothing happens.

DER SPIEGEL: You were part of that commission. One controversial issue that you had to address was who had used chemical weapons in Syria.

Del Ponte: The commission didn’t want it to become public that the rebels had also used chemical weapons. But the proof was clear.

DER SPIEGEL: You took it public on your own. Was that a mistake?

Del Ponte: No. It was necessary. The commission was a sham. The goal was to simulate action, but not to actually hold those who had committed crimes accountable – whether it be Assad or the rebels.

DER SPIEGEL: Could the war in Syria have been prevented?

Del Ponte: Perhaps it couldn’t have been prevented, but it could have been contained. For that, though, the U.S. and the EU would have had get involved diplomatically much earlier. When the situation in Ukraine escalated, European diplomats traveled to Kiev immediately. Ultimately, a major conflagration was warded off there. But nobody was sufficiently interested in Syria.

DER SPIEGEL: Is the UN even still necessary?

Del Ponte: Absolutely. It just finally needs to be given the power that it is granted in its charter. The Security Council is paralyzed. Just look at the example of Israel and Palestine. The members of the Security Council come together, and they talk, but they don’t do anything. That is typical.

DER SPIEGEL: You and the UN are essentially polar opposites. The UN wants to talk, but you want to act.

Del Ponte: That’s why I never liked being there. My office was empty. There wasn’t even a single piece of paper on the desk. The problem is that every country has the right to send officials to the UN. Fully 4,000 people work at UN headquarters in New York. But there often isn’t enough for them to do.

DER SPIEGEL: Assad is still the president of Syria. Other war criminals have also gotten off scot free. Does that make you angry or resigned?

Del Ponte: Neither nor. I keep telling myself that at some point, justice will prevail.

DER SPIEGEL: Where does your hope come from?

Del Ponte: My hope comes from the experience that I have gathered throughout my life. My staff and I built up a lot. That is still there. And somebody will arrive to take up the reins. 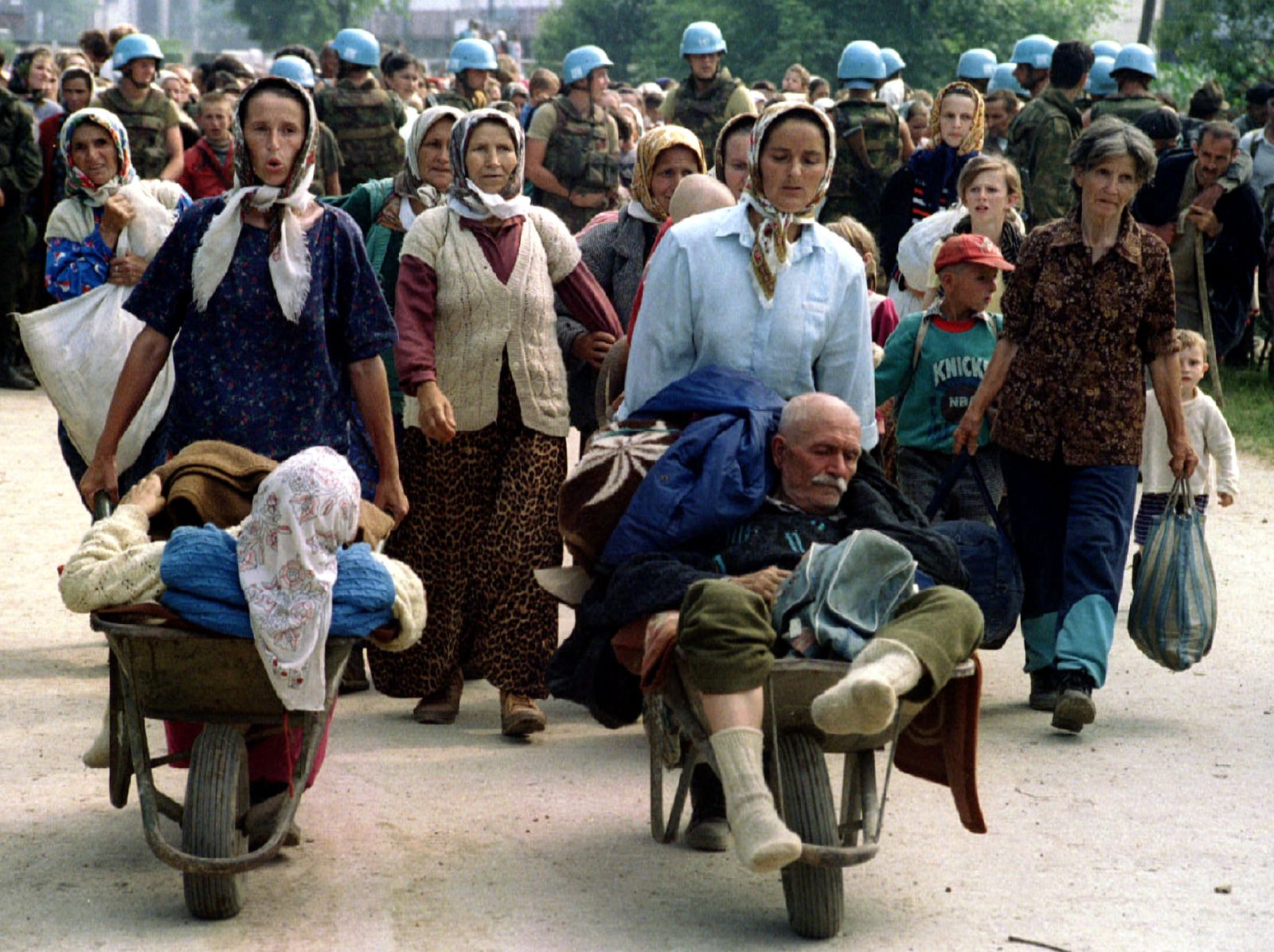 UN troops evacuating refugees in 1995 in the Balkans 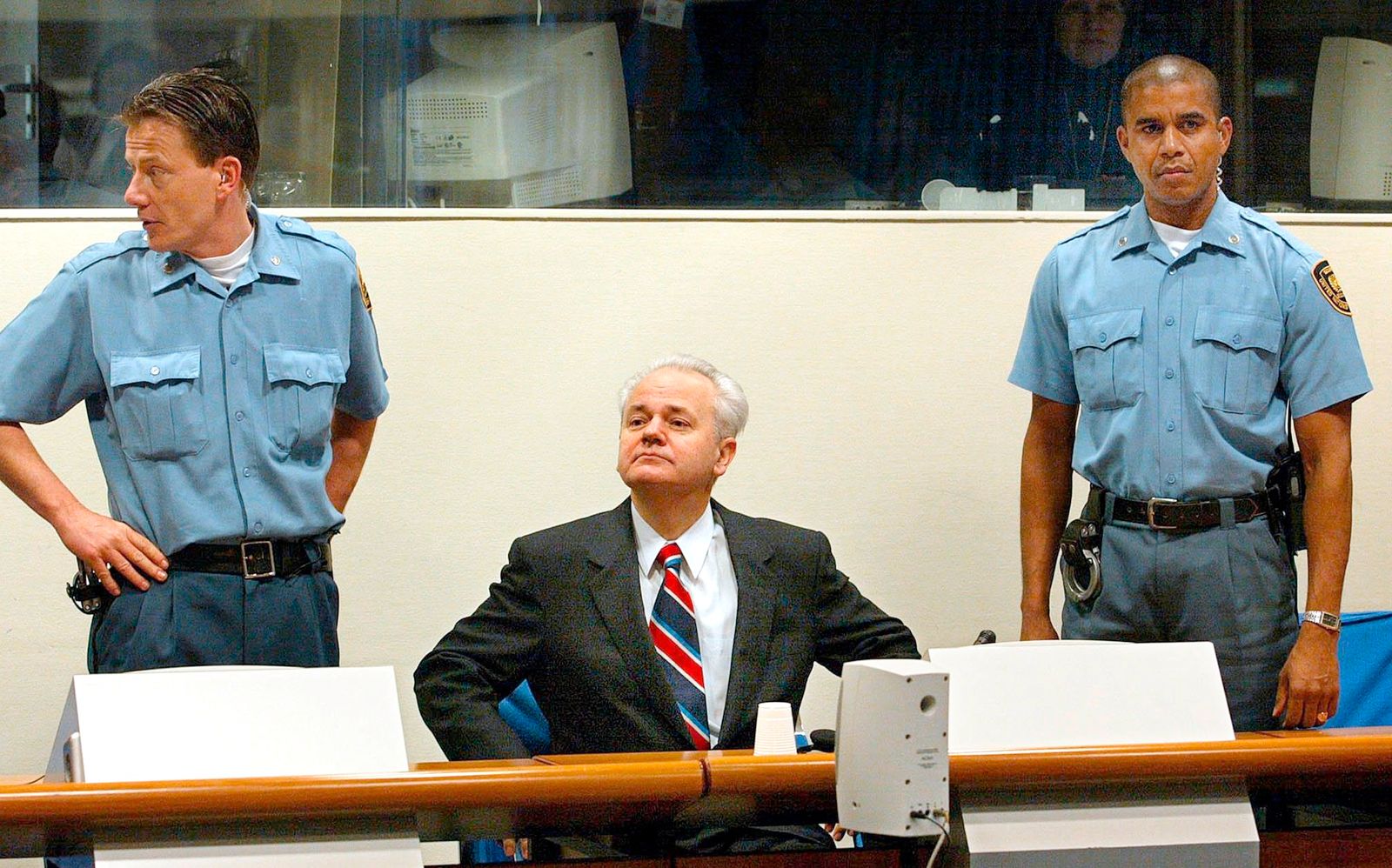 Former Serbian President Slobodan Milošević in court at The Hague.