The hero of Gaza, as they called him, must be a late sleeper. The sun has already been shining for hours over the Mediterranean, shimmering in the distance, but still there is no movement on the second floor of the house in Galilee, where the shutters haven't been opened yet. "Gilad, we have company," Noam Shalit, 57, calls up to the second floor.

Smiling shyly, his son walks down a short flight of stairs into the kitchen, wearing a blue sweatshirt, jeans and sandals. Gilad Shalit, 26, a lanky young man with a soft handshake, is the most famous victim of Hamas since the radical Islamist group began fighting Israel, which it calls the "Zionist entity." In June 2006, Hamas fighters attacked his army post, which was guarding the border to the Gaza Strip at the time, and kidnapped Shalit. On Oct. 18 of last year, after spending five years as a hostage, Shalit was released in exchange for 1,027 Palestinians in Israeli prisons.

Ahmed al-Jabari, the Hamas military leader killed by the Israelis two weeks ago, was standing next to Shalit at his release, looking relaxed in a blue shirt and with his sunglasses tucked into his shirt pocket. He didn't notice him at the time, says Shalit, as he sticks two slices of white bread into the toaster. "I only looked forward, not to the side and not backward," he says.

Despite his ordeal, Shalit has no thoughts of revenge. On the day Jabari, the mastermind behind his kidnapping, was killed in a precision air strike, Shalit was looking forward to attending a football match between Arsenal and Tottenham. A Jewish organization had invited Shalit, whom many see as a model of perseverance and confidence, to London to give a talk.

When asked about Gaza, he speaks quietly and hesitantly, struggling with almost every sentence. No, he says, he did not feel satisfaction when he heard about Jabari's death, because he didn't even know the man. "The killing has to stop," he says. This is Shalit's only message before his father interrupts the conversation. "The boy needs to be left alone," says Noam Shalit. "Gilad isn't a public figure."

'We Have to Negotiate with Hamas'

But it was Noam Shalit who brought politics into the tidy home on the outskirts of the village of Mitzpe Hila in northern Israel. The former engineer, who became known as a result of his son's sad fate, is trying to get into politics, and he hopes to take a seat in the Israeli parliament, the Knesset, for the Labor Party on Jan. 22. He joined the party in 1996, shortly after the deadly attack on the then chairman and prime minister, Yitzhak Rabin.

His wife Aviva wasn't enthusiastic about the idea, says Shalit. But he couldn't resist the entreaties of party leader Shelly Yachimovich. For five years, Noam Shalit almost literally mobilized God and the world to bring his son back alive. He became a celebrity in his own right as a result, and now he wants to put his experiences to political use. But anyone hoping to run for public office in Israel has to have a position on Gaza. So what should Israel do with this poverty-stricken piece of land, where 1.7 million Palestinians suffer just as much under Hamas rule as under the Israeli blockade policy?

Shalit points across the valley. Southern Lebanon, Hezbollah country, lies beyond the soft hills visible from the kitchen window. From there Hamas, Hezbollah's Shiite brother organization, fires rockets on Israeli cities and villages near the border. A Katusha rocket even landed in the neighbor's garden once, in the summer of 2006, two weeks after his son was kidnapped.

"We must defend ourselves," says Noam Shalit. Even if, as it is said, he still hasn't forgiven Prime Minister Benjamin Netanyahu for having waited so long to secure his son's freedom, Shalit supports the government in the struggle against "the terror of Hamas rockets." The situation in the south has become "unbearable" for people because of the incessant rocket attacks, he says.

Does Shalit also feel that the death of Jabari, who was responsible for his son's abduction, was justified? He takes a deep breath, looks uncomfortable for a moment, and says: "He had a lot of blood on his hands. He had to be stopped somehow." But he doesn't believe that this is the right way to put an end to terror. "Hamas replaced Jabari immediately, just as it had replaced his predecessor after he had been killed with Jabari. His death will not bring us any peace or relaxation."

Shalit wants to campaign on a slogan that stems from his own experience: "We have to negotiate with Hamas." After all, he says, negotiation led to success in his son's case. Why then, he asks, shouldn't it be tried a second time? 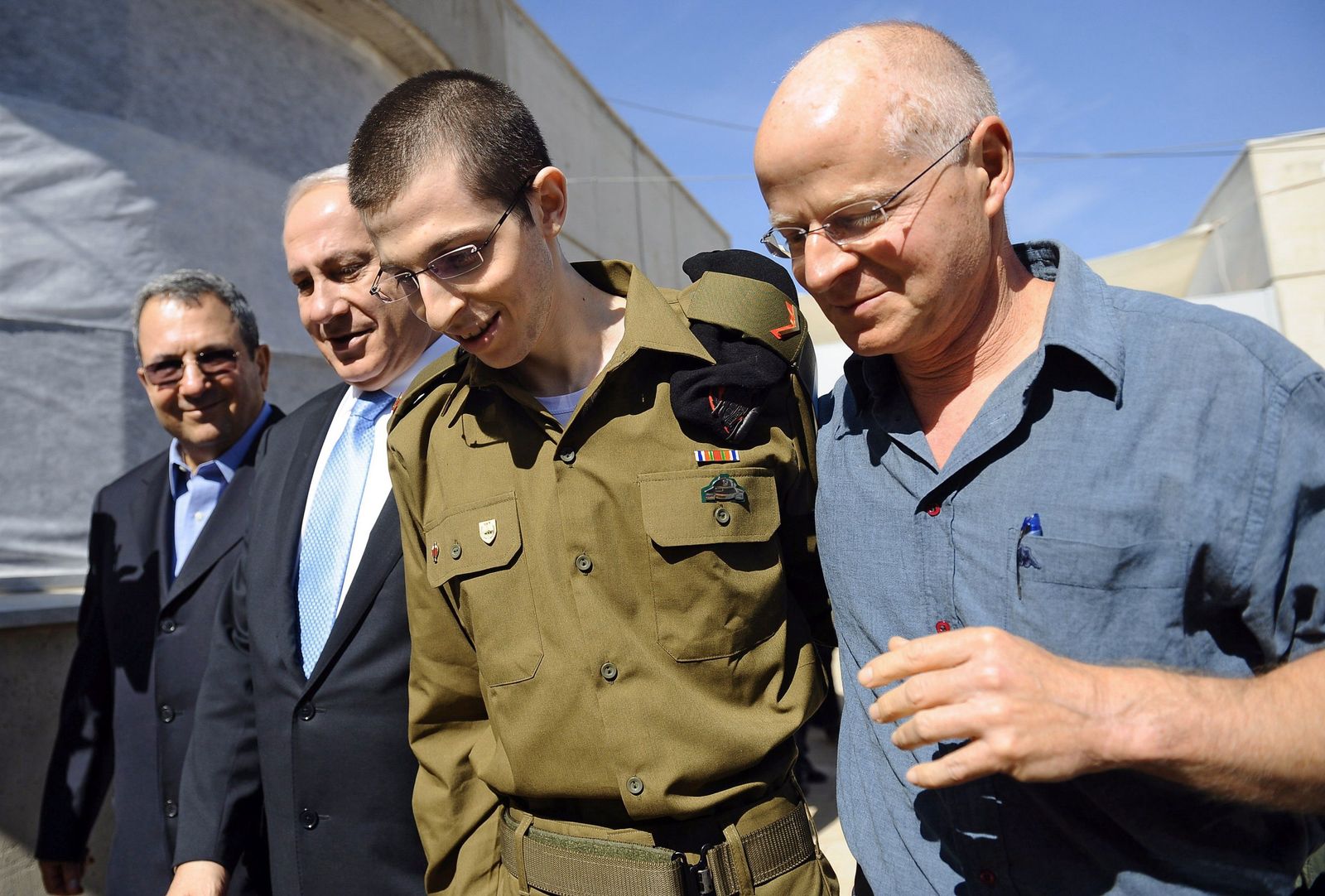 Gilad Shalit (center) with his father (right) and Israeli Prime Minister Netanyahu on the day of his release in October 2011.