SPIEGEL: Many US economists now say that Europe's currency crisis could destroy the US economy. Do you agree?

Goolsbee: It is a very serious threat. Though since US banks underwent extensive stress tests in 2009, markets have a good idea of what the capital positions are of the financial institutions here. Also, central banks would step in to try to prevent financial contagion.

SPIEGEL: But that doesn't protect the US economy from renewed difficulties.

Goolsbee: Certainly people in Washington are very concerned about what is going on in Europe. If the crisis there devolved into banks failing and a run on financial institutions, we saw in 2008 that such a situation could be highly contagious and lead to runs on all sorts of financial institutions worldwide. Also, it seems pretty likely that Europe is going to have a significant economic slowdown from dealing with these issues. If such a large segment of the world economy slows down that much, exports from the United States are going to go down. There would be negative ramifications in America -- which is still trying to recover from the last crisis -- but also globally.

SPIEGEL: Is Chancellor Angela Merkel up to the task of managing the crisis?

Goolsbee: Her leadership at this moment is very important for managing the crisis that is looming in Europe.

SPIEGEL: President Barack Obama speaks with Merkel often on the phone. What exactly does he expect from Merkel?

Goolsbee: I don't speak for President Obama. But I don't think Europe will be able to get out of this without committing to the equivalent of a full stress test, where they make clear what the positions are of the banks, and committing to the recapitalization of the banks. There is a feeling among investors that continental European banks never did that in the earlier crisis. And now, with those institutions holding sovereign debt in Europe, these sovereign debt problems are going to further degrade their capital and could very well lead to bank runs. Chancellor Merkel, and other European leaders, will in the end have to recapitalize banks.

SPIEGEL: Such a move would be extremely expensive. And it would be very unpopular in Germany.

Goolsbee: It is indeed going to cost a lot of money up front. Everybody has seen how unpopular it was in the US and in every other country that has done it. But it was vital to keep the financial system from collapsing. If we were a parliamentary system, we would have had the government fall over this two times in the last three years, in 2008 and in 2010. So I understand Merkel's hesitation.

SPIEGEL: Will European governments have to buy up all toxic assets as the US government tried to do in 2008?

Goolsbee: Buying toxic assets was not actually the main strategy in 2008. Instead, the focus became forced recapitalization of the banks with the government putting money into the financial institutions and getting some of the upside from their recovery. At some point the Europeans are going to have to put equity into their banking system. Not all of the money has to come from the government. In our case, when US banks opened the books and people could see it was not as bad as they feared, it paved the way for new investors from the private sector to invest capital. Even though these measures were highly unpopular, the banks did pay back the money and the US government made back all of the money from its initial outlay.

SPIEGEL: Once passed by all euro-zone countries, the euro backstop fund, the European Financial Stability Facility (EFSF) will have a lending capacity of €440 billion. Will that be enough?,

Goolsbee: Quite possibly it will need more up front money but that also depends significantly on how such a fund is structured. Each government could directly recapitalize the banks. Or Europe could provide the European Central Bank (ECB) with money to create a fund to support sovereign debt markets and fill holes at troubled banks. Richer countries could make aid available to help troubled countries pay their debts and attach conditions on the assistance. Any of these will make ordinary people quite angry. But two things are certain: First, waiting until this turns into a full blown financial panic will guarantee that the cost will be dramatically higher than it is now. Second, without creating a growth strategy for southern Europe, these same issues will arise again.

SPIEGEL: Should a Greek default be considered as an option?

Goolsbee: If the Greeks cannot pay, I do not see how this cannot be considered an option. But we are really close to playing with fire here, because if the Greeks start defaulting, the financial institutions holding Greek bonds would lose stock value. That would likely drive a few banks into insolvency and could start a bank run, which would be hard to stop without some confidence in the recapitalization plans.

SPIEGEL: Does the Obama administration understand just how opposed most Germans are to bailouts for countries like Greece?

Goolsbee: I am not in the administration any longer, but I am sure they are aware of it. Bailouts for domestic banks have been deeply unpopular in the US, too. And the thought of bailouts and guarantees to other countries is even more toxic. Bailing out AIG, when much of the money ended up helping European banks, was very unpopular in the US. I have no doubt the German people detest the idea.

SPIEGEL: You recently said that Germans must recognize that they have been the greatest beneficiaries of the euro zone.

Goolsbee: One of the great beneficiaries. Germans have had an export-oriented growth strategy, and one major enabler of that strategy is that their currency cannot appreciate, so they remain internationally competitive in part because of their membership in the euro zone. The southern European nations cannot devalue their currency and engage in a similar export strategy to counter their slow productivity growth. They are stuck in the euro zone at the wrong price. All discussion about their debt levels aside, this has to be taken into consideration.

SPIEGEL: Germans were always told they would never be held liable for debts accrued in euro-zone countries that exhibited fiscal irresponsibility.

Goolsbee: I am not taking the side of the Greeks, the Italians or the Spanish. But one has to keep in the mind that normal economic policy channels that you would use are not available within the euro zone. If you cannot devalue the currency, one alternative would be a European Union modeled after East and West Germany, with extended transfer payments. The other is to grind down the wages in southern Europe and that is a very hard thing to do.

SPIEGEL: Is Obama losing patience with the Europeans? He just recently blasted European leaders for being too slow in combating the crisis. Treasury Secretary Timothy Geithner has also regularly complained about European hesitancy.

Goolsbee: I think he is losing patience due to the immediate risk of financial crisis and the contagion effects that would have. The issue is with the banks, whether the banks are going to become insolvent. Europe has got to deal with that problem quickly.

SPIEGEL: And yet, the US was responsible for the last global financial crisis just three years ago. Furthermore, ratings agencies have downgraded the US because of its vast amount of debt. And now Washington wants to lecture Europe?

Goolsbee: It is true, we Americans are still trying to deal with problems in the real economy. But our financial system was about to collapse, and through the stress test plus forced recapitalization, we were able to avoid the collapse. I don't think the Obama administration is trying to lecture the Europeans. They pleaded with them saying: "Look, we were in your exact circumstance, and you would be far better off dealing with it quickly rather than waiting for it to spiral into a full blown panic."

SPIEGEL: In a number of books that have appeared recently, the Obama administration is described as being disorganized and not up to the task -- particularly when it comes to economic policy.

Goolsbee: It was largely one book, by Ron Suskind. He tried to portray the president as being indecisive and not in charge. That was absolutely the opposite of my experience.

SPIEGEL: Is it not strange though that Obama has managed to alienate all sides? The right thinks he is a Socialist who increased the debt and failed to create jobs. The left believes he sold out to Wall Street.

Goolsbee: I don't understand it either. We implemented the most stringent regulation of the financial sector since the 1930s -- Wall Street itself is furious at the president. But at the same time, you have another group of people saying he is in the pocket of Wall Street. In the moment, we were just trying to put our heads down and prevent the world from blowing up and make sure we didn't have another Great Depression in the United States. I think historians will look back and say that was a significant accomplishment.

SPIEGEL: The American voters seem unwilling to give Obama much credit. On the campaign trail, he now strikes a more populist tone, such as pushing for a -- largely symbolic -- tax on millionaires.

Goolsbee: That the right-wing Tea Party movement is portraying him once again as a left-wing populist, I just find curious. I mean, the president is calling for payroll tax cuts for employers and workers and public-private partnerships for infrastructure projects. These are hardly extreme left-wing views.

SPIEGEL: At the 2009 G-20 Summit in London, Obama apologized for the US having caused the financial crisis. Now, he is blaming Europe for all negative developments. Is he relying on Europe-bashing to boost his reelection campaign?

Goolsbee: No. This is a different financial crisis than the one in 2008. It is one not predominantly created by the United States, but by Europe. If Europe does not deal with the problem of undercapitalized banks, it could easily blow up and turn into another worldwide conflagration.

SPIEGEL: Has Chancellor Merkel been too hesitant when it comes to accepting that truth?

Goolsbee: Europe as a whole has certainly been too hesitant. Germany is part of the leadership in the euro area -- and it has not yet stepped up and done what has got to be done. 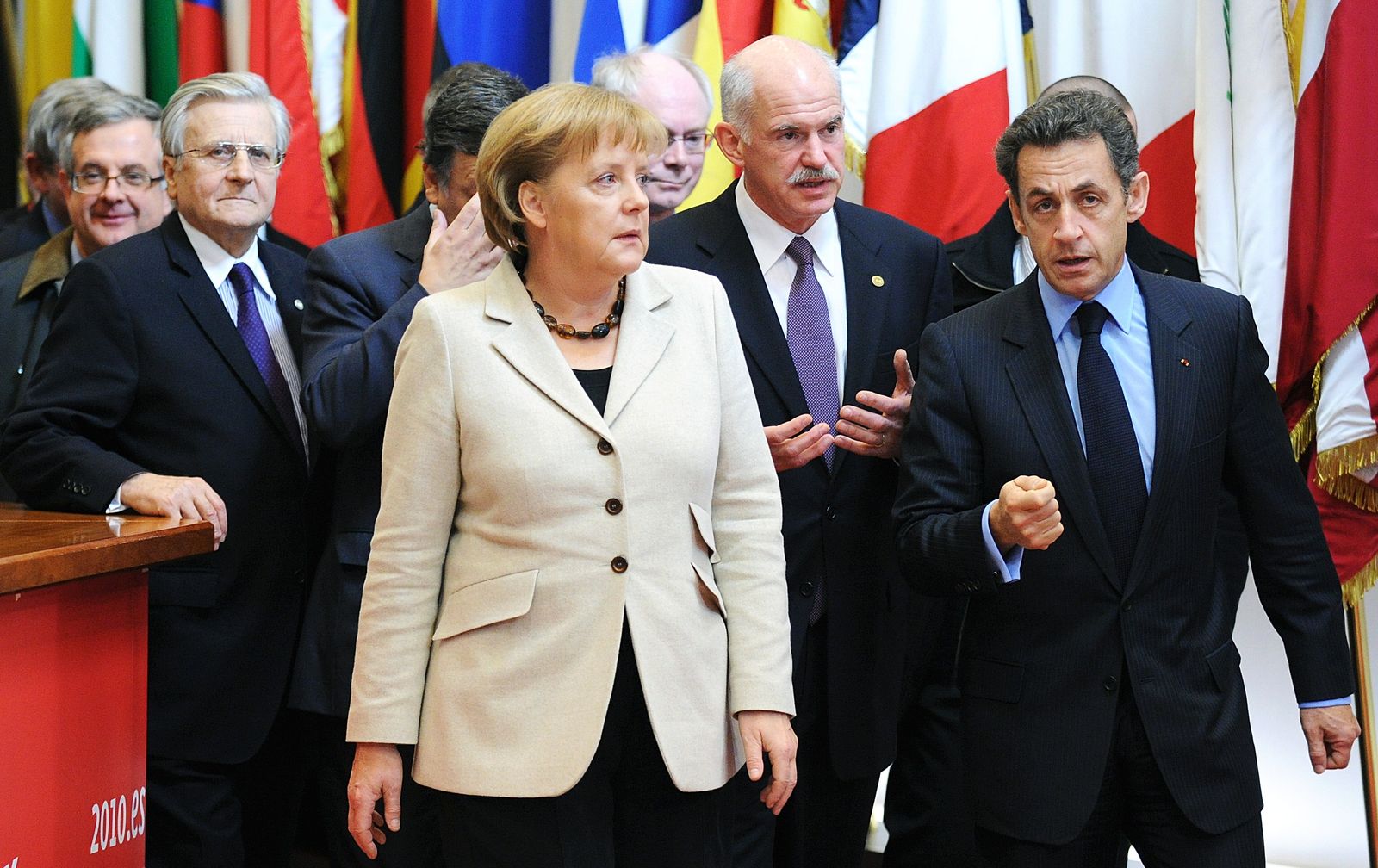