SPIEGEL ONLINE: The US goes to the polls on Tuesday for critical mid-term elections. It is a difficult time for the country -- you have said it is facing a "perfect storm." What do you mean by that?

Reich: First, we have got an unprecedented degree of concentrated income and wealth at the very top of our society. The top one-tenth of one percent of Americans now makes more than the bottom 120 million. Secondly, courtesy of a grotesque opinion by the Supreme Court of the United States, we now have virtually unlimited money flowing from the rich and from corporations through secret devices that make it impossible to know who is contributing what to various campaigns and to advertising for and against various candidates. Such anonymous groups have spent more than $400 million on the latest election, according to estimates. And finally, we have a broad electorate still unemployed or in danger of being unemployed, still in danger of losing their homes or already having lost their homes, still experiencing a major drop in their savings or their net worth. This frustrated and anxious population is easy prey to demagogues who will blame others for their problems rather than explain what needs to be done.

SPIEGEL ONLINE: In other words, it is no surprise that candidates opposing government spending appear likely to win many of the open Congressional seats.

Reich: This is one of the areas that are very easy to demagogue. By accusing government of being the enemy and promising people that if we simply shrink government they will be better, some politicians and ideologues are attempting to improve their own positions of power. They are misleading the voters. We know that when the private sector is unwilling or unable to spend and when consumers are under a huge debt load, government is the last remaining spender, at least in the short term. Longterm deficits do have to be reduced, but unless we get the economy growing in the short term through government spending, we're all going to be experiencing a much longer and more painful socalled recovery. We need a bigger stimulus now.

SPIEGEL ONLINE: Why then is President Barack Obama's Democratic Party so wary of considering an increase in government spending?

Reich: It started with the bailout of Wall Street. The socalled Tea Party movement that's gradually taking over the Republican Party began when President George W. Bush and, after him, President Obama provided Wall Street with $700 billion. It looked and felt like an insider job, a rigged deal to many Americans. In the US, when there is a sense that government and business are in cahoots, the tendency is to blame government rather than business. Had Obama put very strict conditions on that bailout, requiring for example, that Wall Street firms lend to small businesses, that homeowners be allowed to reorganize their mortgage debts under personal bankruptcy, that they limited their own pay, I don't think we would have had the kind of reaction we did. Obama also failed to connect the dots, showing America that the financial reform bill, the health care bill, and the jobs bill, the stimulus package, were all part of a broader effort to restore the middle class and fairness in the American economy.

SPIEGEL ONLINE: It is easy to blame the politicians. But what about the American consumers? They went on a spending spree -- and should have known better.

Reich: The American economy has grown dramatically over the last three decades, but median wages have barely grown at all. Median family incomes have grown slightly but only because women have gone into the paid workforce in great numbers, because everyone was working longer and because people had more disposable income to the extent that they could borrow. Now we're in trouble because all of those coping mechanisms, as I call them, are exhausted. When so much income goes to the top, the vast middle class and working class simply don't have enough money to buy all the things the economy is capable of producing without going deep into debt, and that debt bubble cannot be sustained. To suggest that the problem is that American consumers spent beyond their means begs a far more fundamental question: Why didn't their means increase as the economy increased in size dramatically. We have not seen such a large gap between the top and the bottom since 1929 and you know what happened then.

SPIEGEL ONLINE: In addition to the Great Depression, there was also a sharp increase in the amount of national rage, both with politicians and within the political debate. Could that happen again?

Reich: I think what we're seeing now in America is an outbreak of isolationism, nativism, and xenophobia. The Tea Party is against foreign trade. We are also seeing an outbreak of antiimmigrant sentiment across the country. The anger directed at China now is out of proportion to China's real effect on the American economy. China is not to blame for 15 million jobs being lost over the last two and a half years. My point is that we are already seeing the hallmarks of the politics of anger and resentment, which led in the 1930s to isolationism. That's very much what worries me.

SPIEGEL ONLINE: On the other hand, the angry debates back then ushered in significant reforms. Can that happen again?

Reich: That is the big question whether we will adopt reforms of a similar nature to the reforms we adopted in the 1930s, '40s, '50s and '60s -- reforms that dramatically expanded opportunity and also public investments in education and infrastructure. We then had 30 percent of our population in trade unions. Now it's fewer than 8 percent. Then we had a marginal income tax on the highest earners of 91 percent, now the marginal income tax on highest earners is 36 percent, but the super rich have managed to exploit a loophole in which much of their income is treated as capital gains and, therefore, subject to only a 15 percent tax.

SPIEGEL ONLINE: When you served in the White House, President Bill Clinton began on the left but drifted to the middle after the Democrats lost significant ground in the mid-term elections. Do you see that happening again?

Reich: I was there with Bill Clinton when he tried to socalled "triangulate" and please the voters in the middle. But the middle is a fiction. The middle is simply where most voters who respond to surveys say they are. What Clinton did and what Obama may be forced to do is to give up leadership; that is, to simply respond to polls. I think it would be a shame if Obama moved from leadership to opinion polls, but his advisors may feel that that's the only way to guarantee him a re-election. 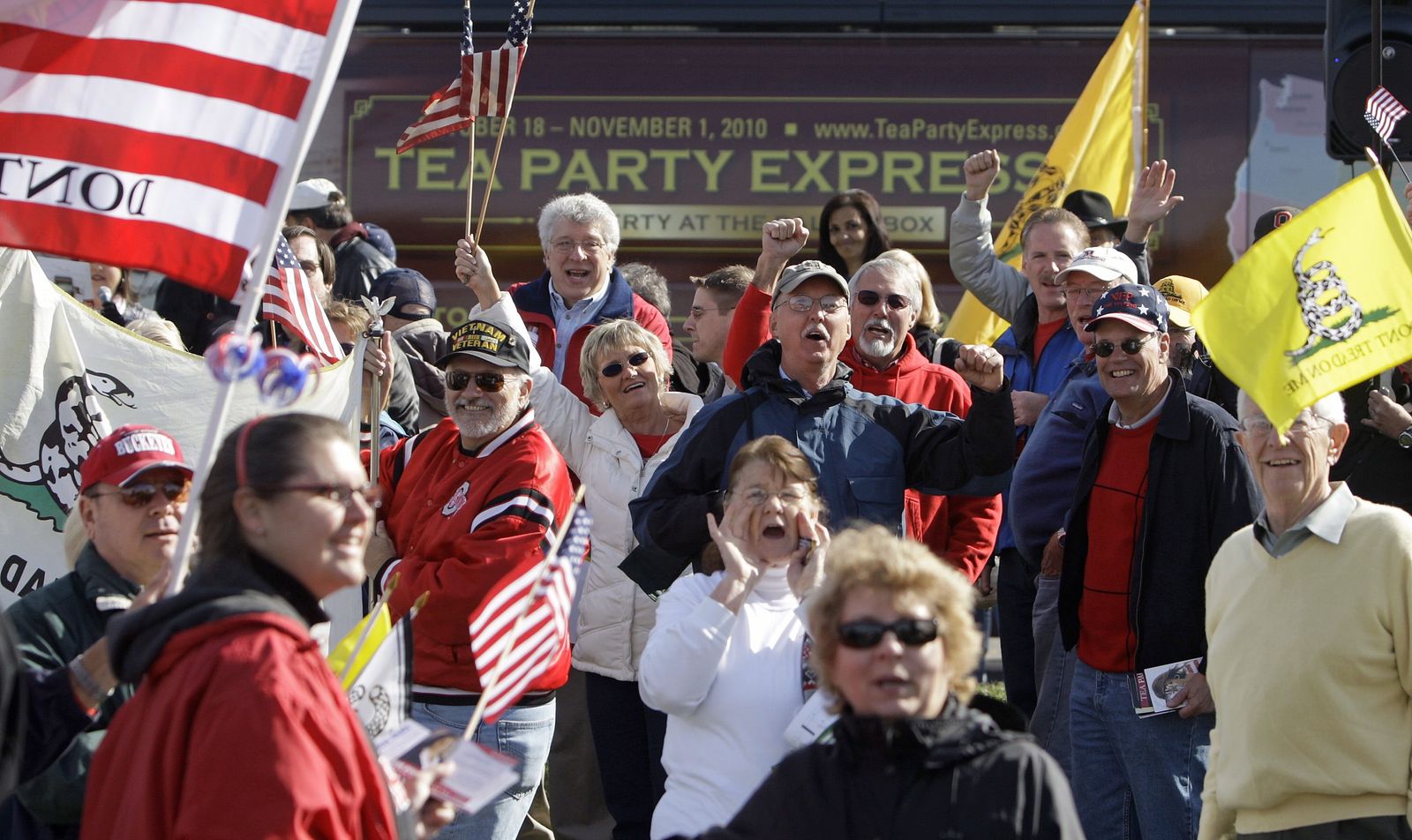 Tea Party movement supporters rally in Ohio. "We are already seeing the hallmarks of the politics of anger and resentment," says Robert Reich.