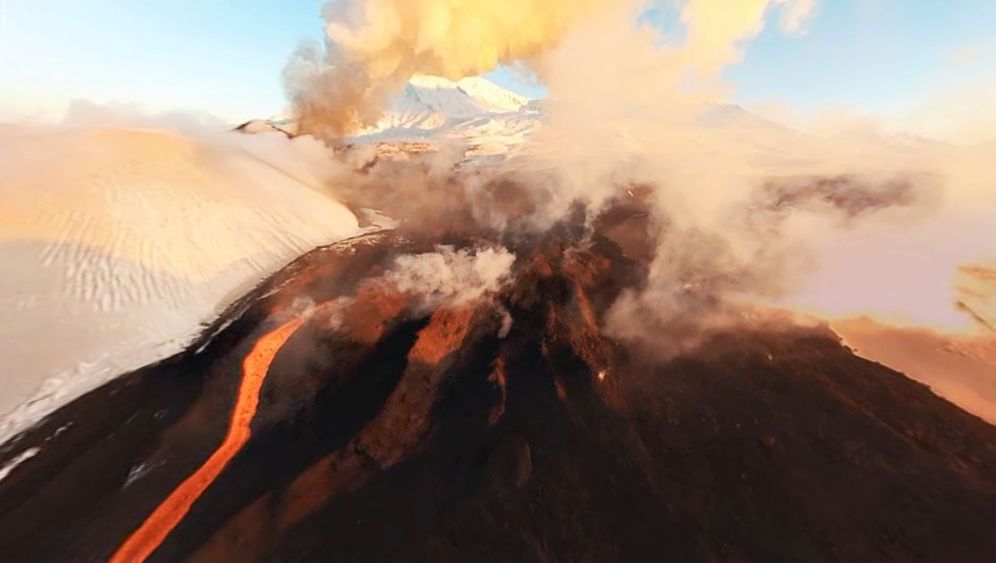 Volcanic eruptions are hardly a rarity. It seems that a new one goes off every few weeks or so somewhere in the world. But a string of four volcanoes erupting in close proximity to one another is virtually unheard of.

That, though, is what has taken place in recent weeks on the Kamchatka Peninsula in Russia's far east. Four different cones and mountains, all within 180 kilometers (110 miles) of each other, have been active simultaneously since late November. Given that volcano experts don't believe that the four volcanoes are being fed from the same magma source, the parallel eruptions would seem to be the geological equivalent of winning the lottery.

And, as a photography team from the Moscow-based Airpano discovered, the phenomenon presented a fantastic opportunity to produce some awe-inspiring images and videos. Indeed, the quartet of lava and ash-spewing peaks are so close to one another -- they lie within 180 kilometers (110 miles) of each other -- that that the film crew recently visited all of them in a single day. (Use your mouse or arrow keys to change your viewpoint once you click in to the video below.)

That volcanoes erupt in Kamchatka is, of course, hardly news. The peninsula, which has a total land mass that is slightly larger than Germany, is one of the most active parts of the infamous "Ring of Fire," the zone of volcanic and seismic activity that encircles the Pacific Ocean. Three tectonic plates -- the North American Plate, the Okhotsk Plate and the Pacific Plate -- collide beneath Kamchatka, with the peninsula's coastal range boasting 30 active volcanoes.

All four of the volcanoes now erupting have shown significant activity in recent years. Most recently, Tobalchik began spewing lava on Nov. 27 of last year, creating the impressive lava flows visible in the 360 degree video taken by Airpano. Shiveluch, the northernmost of the four, prefers shooting columns of ash high into the air, which it has been doing on a regular basis during the last four years since a magma dome in its crater exploded. Besymjanny awoke with a bang in the 1950s following 1,000 years of dormancy and has been active since then, with huge clouds of ash rising on a regular basis. Finally, the southernmost of the quartet, Kisimen, has been erupting regularly since 2010, and there is concern that it could perform a repeat of the violent explosion which sheered off half of the mountain some 1,300 years ago.