A huge convoy of cars suddenly drove into the small city of Sevare, in central Mali, at around 3 p.m. on Thursday. One could already tell from the incessant honking that something was amiss. "Get out while you still can!" screamed the sweat-drenched driver of a dilapidated blue Mercedes. Then he stepped on it, and the other cars raced away behind him.

Within a few minutes, the air was so thick with dust that it was hard to see. Panic broke out. Not knowing what to do, those standing around jumped on the few remaining minibuses in the intersection. Everyone wanted to get away -- and fast.

Even the police were gripped with sudden anxiety. Phones started ringing non-stop on the rickety tables in the blue-painted main station and officers kept running into the room shouting.

"We can no longer guarantee your safety," the brawny police chief barked. "The Islamists are only a few dozen kilometers away. My men will drive you to the city limits at once." From there, he explicitly advised us to make our way as quickly as possible to Bamako, the capital city, some 700 kilometers (435 miles) away.

In Bamako, President Dioncounda Traore would soon be writing letters to French President François Hollande and UN Secretary-General Ban Ki-moon, asking for help in stemming the sudden offensive of al-Qaida-linked militants from the north. The letter prompted an emergency meeting Thursday evening in New York of the UN Security Council, which resulted in a call for the swift dispatch of international forces to the region.

The sense of urgency was shared in France, Mali's former colonial ruler. Speaking to France's diplomatic corps on Friday morning in Paris, Hollande said: "We are faced with a blatant aggression that is threatening Mali's very existence. France cannot accept this. We will be ready to stop the terrorists' offensive if it continues."

Hollande qualified the pledge by saying that France would only provide military support within the framework of a UN Security Council resolution. French diplomatic sources told Reuters, however, that existing UN resolutions would already permit French military intervention. Hollande and Malian interim President Dioncounda Traore will discuss matters further during a meeting scheduled for next Wednesday in Paris.

In a statement released Friday, German Foreign Minister Guido Westerwelle voiced his support for accelerating efforts to establish an African-led military force to aid the Malian government, though he also called for an intensification of diplomatic efforts, as well.

Westerwelle also noted that the European Union is willing to continue with its military training assistance, but "if and only if" the country meets certain preconditions, such as proving that all of Mali is on a sustainable path toward re-establishing a constitutional democracy in the wake of a military coup in March 2012. His comments have widely been interpreted to mean that Germany has no intention of sending troops.

French Troops Already on the Ground

France had previously only committed to providing training and logistical support to Mali's military. By Thursday evening, however, rumors had begun circulating on the frontlines among the various Islamist groups and the notoriously poorly armed government soldiers that French troops were already on their way or had already arrived in Sevare, which is located near a large military barracks and airport.

On Friday afternoon, SPIEGEL ONLINE observed camouflaged Transall cargo planes landing and taking off at the airport, though it was impossible to make out whether they bore French markings. Likewise, two combat helicopters set down at the airport, which has now become the last line of defense for the government forces.

The military has completely closed Sevare off to the media. But residents reached by phone on Friday morning reported having seen French special forces troops in the city. Speaking on condition of anonymity, several Malian officers confirmed the arrival of a small group of elite French soldiers, explaining that they are supposed to help the Malian army in its efforts to drive back the Islamists. One officer mentioned a handful of French soldiers primarily tasked with coordinating troop movements.

The presence of French troops in Mali has been known for several days. France and other EU countries have conducted military training programs in Mali for years, though these were suspended after the military coup last March. France restarted parts of its program after the UN Security Council passed a resolution in late December authorizing the deployment of an African-led International Support Mission in Mali (AFISMA) to aid Malian forces in countering the rebels and recapturing lost territory. The Malian military says that French special forces launched a training program for elite government forces in the central city of Segou.

Back in Sevare on Thursday afternoon, one had to rely on the telephone to learn what was happening just a few kilometers to the north. Terrified residents spoke of heavy fighting in the strategic northern town of Konna. "Pickups are driving through the streets. The Islamist fighters first stopped in front of a church and fired several rockets at it," said one woman. There had been intense firefights with government soldiers before that, she added, many of whom were lying dead on the streets. By that time, Malian soldiers had already given up hope of winning. Those still alive were fleeing rebel forces.

What happened on Thursday afternoon has brought the crisis in Mali to a new low point. Since April, the rebels have held an area in the desert-covered north that is as large as France and Spain combined. But now radical Islamists are pushing into the greener south and expanding the area under their control.

For now, the frontline between their area, governed by sharia law, and the rest of Mali lies a great distance from the capital city. But Thursday's events have clearly shown the country's military has little with which it can counter the rebel fighters.

The region where Thursday's fighting took place is strategically significant. If the rebel forces, made up of a coalition of three terror groups, succeed in taking Mopti, the main town in the region and gateway to the north, they will control another stretch of the important national roadway. In Gao, Timbuktu and Kidal, the largest cities in the north, the extremists are already more or less dug in, having established defensive positions complete with supply depots and tunnels.

On Thursday morning, Mali's army had tried to make the situation look much better than it was. Speaking to the press in Bamako, military spokesmen reported on the successes of government troops, even going so far as to claim that Malian soldiers had gained territory in an offensive against the Islamists. One general even claimed that government soldiers had seized a rebel-erected border station. While he was making these statements hundreds of kilometers from the frontlines, heavy fighting had already broken out in Konna.

As Thursday progressed, it was hard to come by news of what was happening in the combat zone. One doctor reached by phone in Sevare reported that dozens of bodies and many more wounded were brought to the hospital in the evening, almost all of them government soldiers. Sekou Drame, the senior officer on the ground, did nothing to hide the hopelessness of the situation. "We are trying to hold on to the city," he said. "But we only have a few hundred men here and hardly any heavy weapons." Meanwhile, the Islamists announced via Twitter that, inshallah, they would be in Sevare in time for evening prayers.

The rebel offensive would seem to dispel all hopes of reaching a negotiated solution to the crisis. At the beginning of week, when heavy fighting first broke out in central Mali, peace talks scheduled to begin on Thursday in nearby Burkina Faso were postponed until January 21. Now that the rebels have been emboldened by their newly conquered territory, it might be even more difficult to get them to make concessions.

Indeed, when Djibril Bassole, Burkina Faso's foreign minister and the regional mediator in the crisis, called on both sides Thursday to respect a cease-fire deal signed in early December, it seemed like nothing more than wishful thinking. 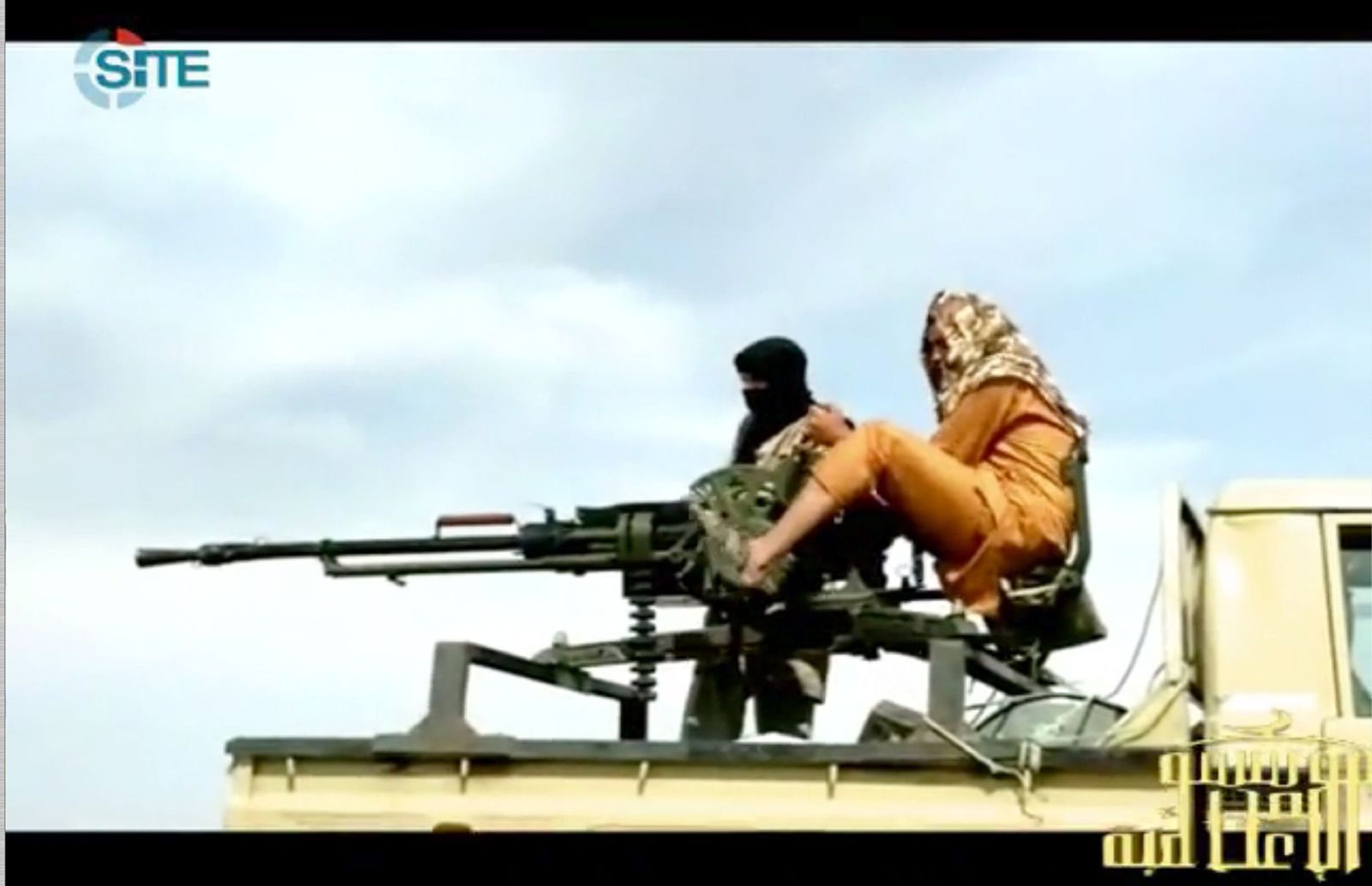