They had come to celebrate. Around 100 people were gathered on the outskirts of the village of Bounti in Mali, West Africa, for a wedding in January. Some sat on mats in the shade of trees and drank tea. The feast was about to be served when French fighter jets appeared in the sky, says Madabbel Diallo, 71, a shepherd who was one of the guests.

A short time later, Diallo heard an explosion and then another. The next thing he remembers is lying on the ground, badly injured. His legs were bleeding. He saw people with limbs torn to shreds. One man’s entrails were seeping out of his body. Helpers who rushed to the site from the village took Diallo to the clinic in the nearest town.

Speaking of the attack several days later over the phone, he was still in a state of shock. His cousin, Mamoudou Diallo, also wounded in the attack, was lying in the bed next to him. Three of his nephews were dead. "People collected severed arms, legs and heads, threw them into a hole and buried them,” he said.

"They Came with Planes and Bombed Us"

Twenty-two people died in the French attack on Bounti. The French government insists that the victims were exclusively Islamist terrorists, against whom France is waging war in Mali. But Madabbel and Mamoudou Diallo as well as six other witnesses from Bounti who DER SPIEGEL interviewed independently, contradict that account. "There weren’t any jihadists there,” says Madabbel Diallo. "No one had weapons, not even a knife.” Aliou Barry, a farmer, says: "We were celebrating a wedding. And they came with planes and bombed us.”

Investigators from the United Nations peacekeeping mission in Mali, known as MINUSMA, hold a similar view. Their investigation report states that although three of the victims belonged to the jihadist group Katiba Serma, all others were civilians. François Lecointre, chief of the French defense staff, speaks of "manipulation,” and says that drone footage would exonerate his soldiers. But the army is refusing to release those images on account of military secrecy.

The incident in Bounti sheds light on a conflict that is largely taking place far away from the public eye. The French military has been deployed in Mali for more than eight years. But what began in January 2013 as a targeted offensive against Islamist insurgents, primarily in northern Mali, has turned into one of the longest wars in France's recent history.

Paris has deployed more than 5,000 troops in Mali and neighboring countries – one-third of its total troops abroad – as part of Operation Barkhane. Despite their presence, the jihadists have managed to spread across much of the Sahel – in Mali, Burkina Faso and Niger. French President Emmanuel Macron has called on other countries, including Germany, to become more involved in the hunt for terrorists. After its withdrawal from Afghanistan, Mali will be the largest foreign deployment of the Bundeswehr, Germany’s armed forces, with around 1,000 German soldiers currently participating in the Minusma mission. The Germans are also training Malian soldiers on behalf of the European Union. The mandate granted by German parliament, though, explicitly excludes German forces from participating in active combat as part of Operation Barkhane.

The French government wants to stop the advance of the Islamists in Mali, and to stem the flow of irregular migrants to Europe. But when it comes to the details of the operation, Paris is tight-lipped, with even allies receiving but scant information.

DER SPIEGEL and the online portal The New Humanitarian spent months reporting on the Barkhane mission. The reporters traveled to Mali on several occasions, accompanied soldiers in action, met with witnesses and reviewed internal documents as well as publicly available data. Their research shows that, in some cases, French soldiers and their Malian allies may have violated international law.

Frustration with the Government

Mali is to France what Afghanistan is to the United States – a seemingly endless war that is difficult to win – and one that repeatedly claims innocent victims. According to data from the NGO Armed Conflict Location & Event Data Project (ACLED), around 8,000 civilians have been killed in attacks from various sides since 2013.

In Gossi, a town in northeastern Mali, French soldiers are patrolling alongside their Malian counterparts on an April afternoon. They are wearing bulletproof vests and carrying rifles as they stop vehicles to check documents. "We want to show presence,” says Benjamin, a French officer. A teenager starts shaking as he is stopped on his bicycle by the security forces. "What’s wrong?” Benjamin asks in French. "Why are you afraid?” The boy looks at him with uncertainty. The Malian soldiers are also at a loss. They come from different parts of the country and don’t speak the language of some of the people in Gossi. A local resident finally rushes to help. "He’s a kid, that’s why he’s scared,” he says. The soldiers scroll through the boy’s mobile phone and let him go.

In most cases, French soldiers are sent to Mali for three to four months as part of the Barkhane operation. Many of them are young, and they often find it difficult to properly assess the situation on the ground.

The French, with their armored vehicles, fighter jets and drones, are militarily superior to their opponents. But those are of little use when it comes to the everyday reality of war. As with the Americans and their allies in Afghanistan, the French repeatedly succeed in killing extremists, but not in bringing lasting peace to the region.

Some of the Islamist groups that control parts of the Sahel have links to the Islamic State or al-Qaida. More importantly, the groups are firmly anchored within the population and are able to leverage the frustration that many Malians feel toward the central government.

The government in Bamako is considered weak and prone to corruption. Just recently, the military overthrew the government in a putsch for the second time in nine months. Mali is now being ruled by Army Colonel Assimi Goïta.

Criticism of the deployment is growing in both France and Germany, and politicians from several German parties are demanding the withdrawal of German troops. But German Chancellor Angela Merkel wants to continue the mission. "We believe that our presence on the ground is still important,” Merkel said last Monday, following a joint meeting of government ministers from Germany and France.

"All they told me was that France is not responsible for deaths in Mali."

France's involvement in Mali began with a 2013 request from the country's rulers for help when jihadists closed in on Bamako. The French only intended to stay in the country for a few weeks, but the former colonial power was drawn deeper and deeper into the conflict. And the longer the fighting went on, the greater the losses. More than 50 French soldiers have died since the beginning of the war – as have an incomparably greater number of Malians.

Idrissa Maiga, a farmer from central Mali, lost his wife and three children in 2013 during a rocket attack that he attributes to the French. He has sought compensation, but in vain. Maiga turned to the authorities and media in Mali and France. "All they told me was that France is not responsible for deaths in Mali,” he says.

The government in Paris doesn’t like to talk about the civilian casualties of its war on terrorism. According to the French Defense Ministry, only seven civilians have been killed in direct attacks by French soldiers since 2013. However, reports from Mali indicate that the true death toll is many times higher. Investigations into these cases are difficult even for other nations stationed in Mali, such as Germany.

Since France is acting largely on its own with Operation Barkhane, it isn’t accountable to any of its UN partners. The Bundeswehr, for example, has "no knowledge of its own” regarding the attack on Bounti. And no one in Berlin, right up to German Defense Minister Annegret Kramp-Karrenbauer wants to comment on the critical UN report out of consideration for the government in Paris. The German Defense Ministry issued a terse statement on the matter, saying an evaluation of the incident is not possible. "A robust mission like Barkhane is needed to establish a basic level of security, even if some people in our country don’t like it,” Kramp-Karrenbauer said in a recent video chat with the Bundeswehr’s Mali commanders and members of the German parliament.

There is evidence, though, that the French military is deliberately keeping its civilian casualties a secret. One internal Barkhane document viewed by DER SPIEGEL reveals that French soldiers shot and killed a man on a motorcycle in a village in central Mali who they mistakenly believed to be a suicide bomber. Rather than holding the soldiers accountable, France paid money to the bereaved. Malian anthropologist and government adviser Bréma Ely Dicko warns that a failure to come to terms with possible war crimes is driving recruits into the arms of the jihadists.

Paris is trying to get the Malian military more involved in the operation. The French say they have trained 18,000 Malian soldiers since 2014. But Mali’s armed forces remain poorly equipped, disorganized and are often outmatched by the jihadists.

Support for the reporting and research in this article was provided in the form of a fellowship granted by the Investigative Journalism for Europe fund.

Observers regularly accuse Malian soldiers of human rights violations. The French military and the German armed forces claim they also want to train their Malian allies to improve their interactions with civilians. "We explain to them that you can’t clear dirt with dirt,” says Serge Camus, the Barkhane commander in Gossi. Still, it seems that more civilians were killed by security forces than by terrorists in the Sahel last year.

The Malian military maintains a base in Boulkessi, a village on the border with Burkina Faso – a base which has been fortified by the French army. And yet more civilians have died in and around Boulkessi than in any other region of Mali as a result of attacks by the Malian army – 153 people in the past three years alone, according to data from the NGO ACLED.

Tidiani Diallo, a teenager from Boulkessi, watched as Malian soldiers invaded his hometown in 2018, allegedly to avenge the death of a comrade. He claims that they shot people at random, arrested the village leader and the imam, and said: "We told you that if one of us died, we would kill 20 of you.”

In January, French and Malian soldiers conducted a joint operation in villages near Boulkessi. They raided several houses, apparently on the search for terrorists. Four men were arrested. One witness claims that Malian soldiers threw the men "like a sack of rice” into a vehicle. A day later, two of them were found dead on the side of the road. A third returned home after two weeks in custody and the fourth is still missing. All of Boulkessi’s residents have since fled.

The dark side of the French mission in Mali is largely out of the public’s view. Meanwhile, the Malian armed forces are seldom held accountable for possible war crimes. And some people in Mali are growing increasingly angry about the military operation. Earlier this year protests against France were held in Bamako: Some no longer see the French soldiers as protectors, but as occupiers.

It’s likely that President Macron is looking for a way to at least reduce the deployment. In recent years, he has had to stand in front of the coffins of French soldiers again and again. Following the most recent putsch, it has been even more difficult to justify the mission politically. In a recent interview, Macron stated more clearly than he has before that he would not support a government that lacks democratic legitimacy. 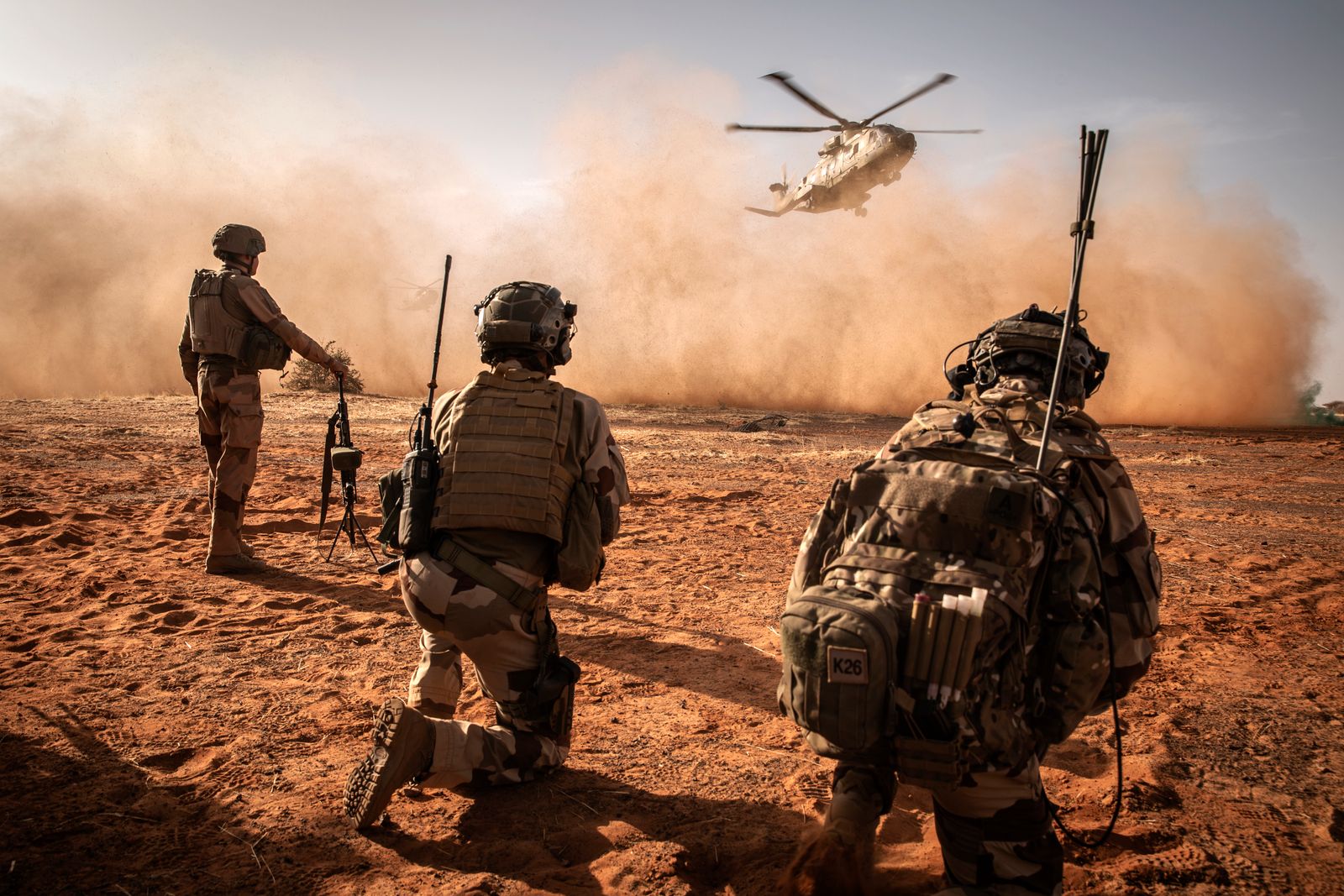 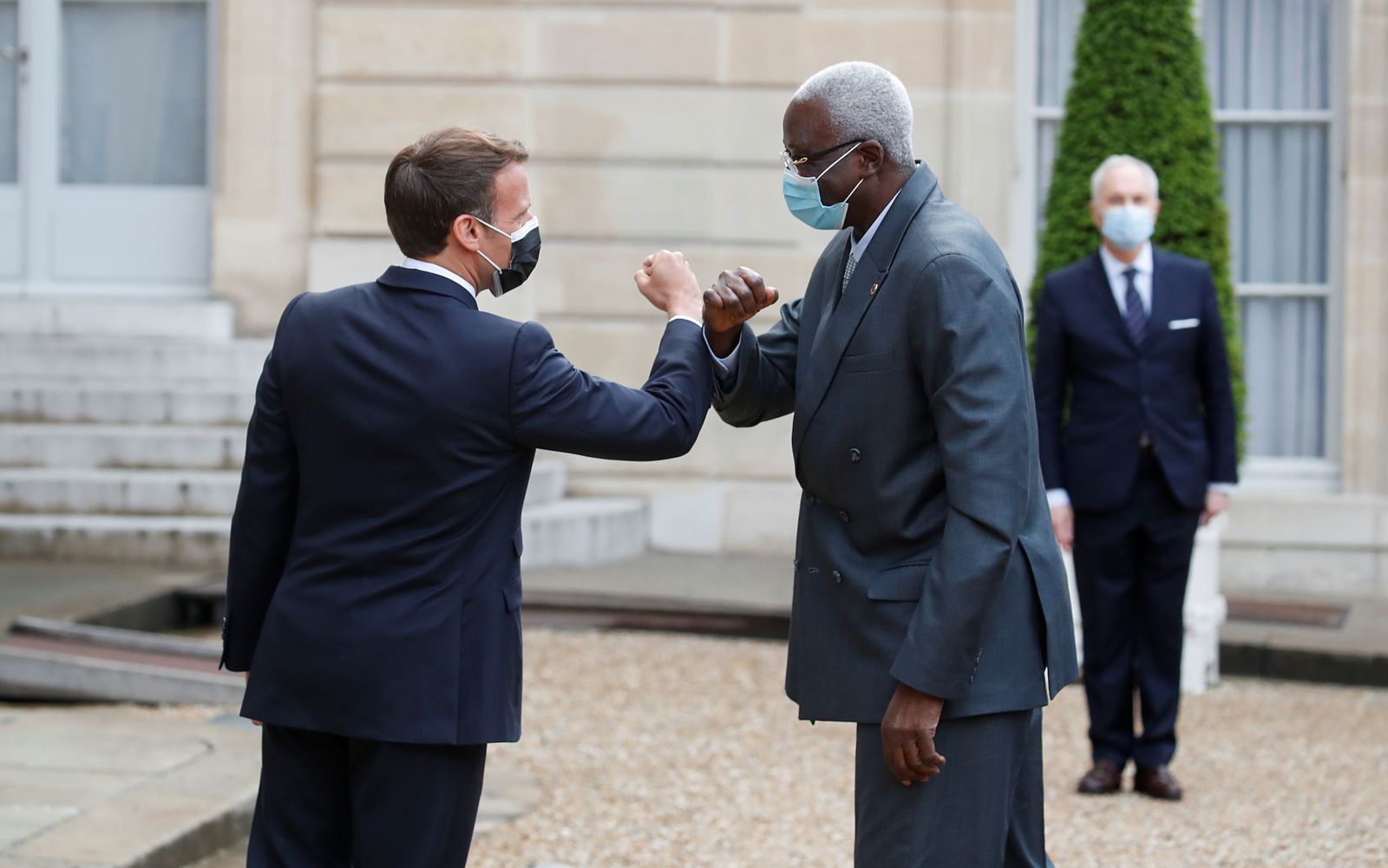 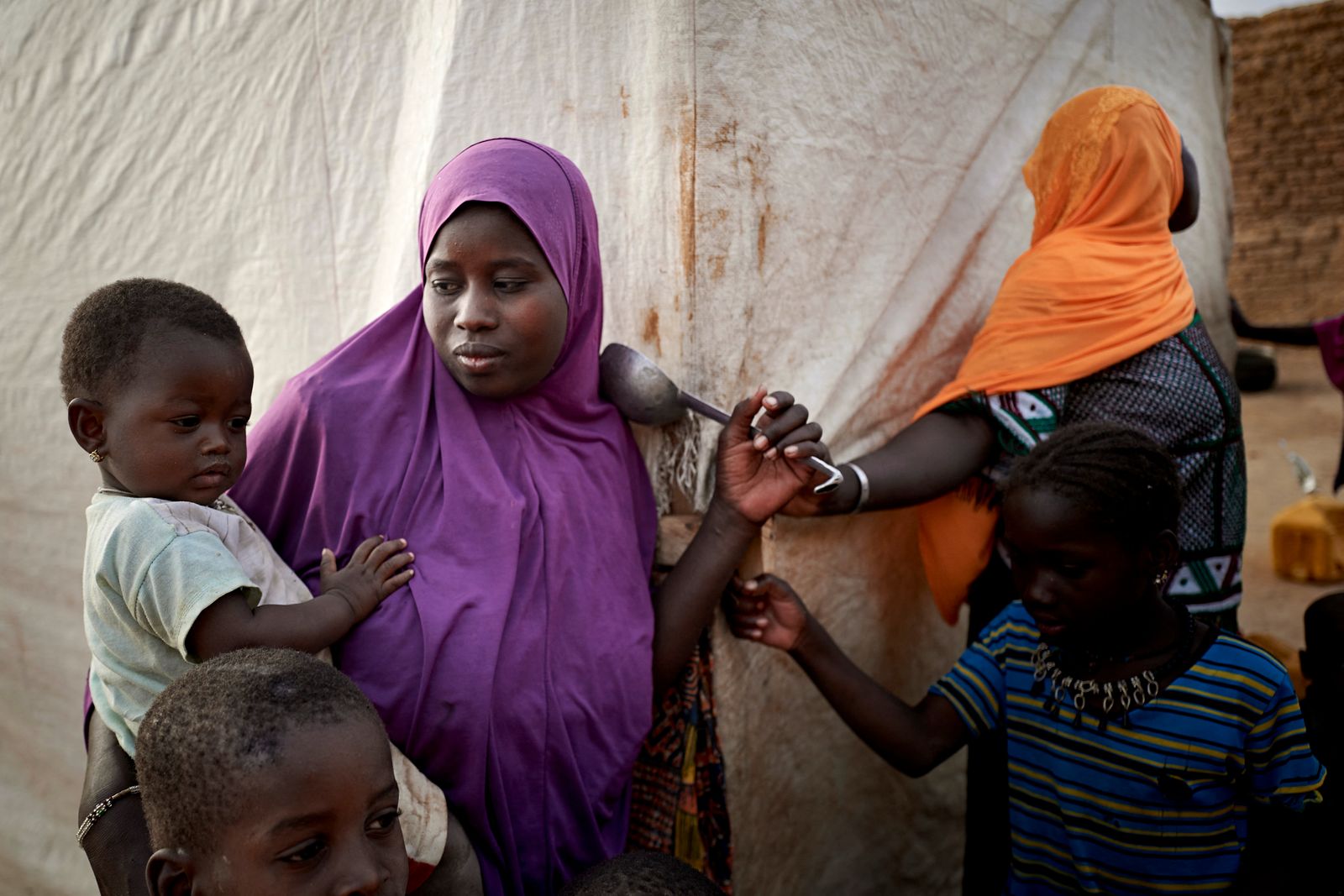