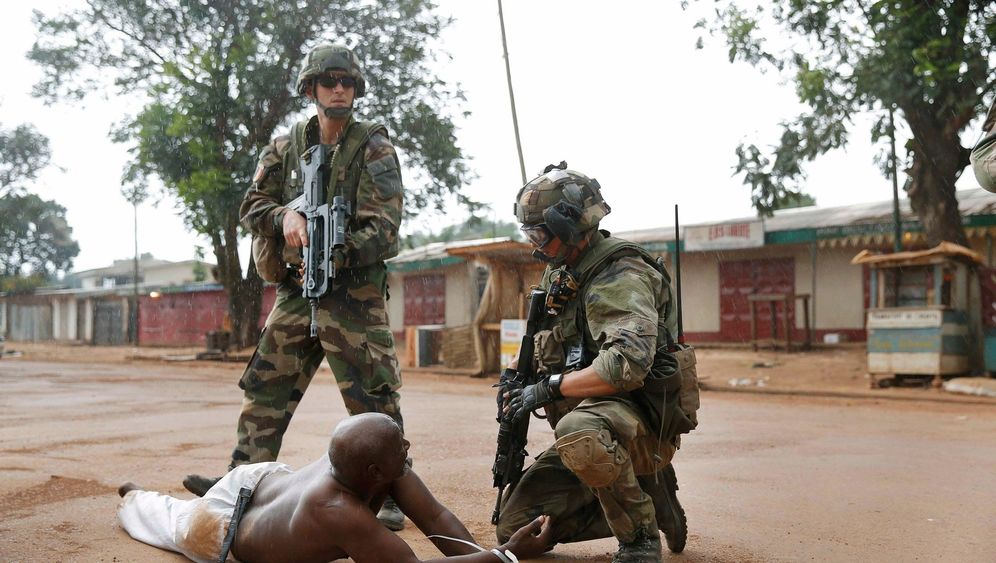 Bernard Kouchner can't get the images of massacred women and children out of his mind. The co-founder of the organization Médecins Sans Frontières, or Doctors Without Borders, was in Rwanda during the 1994 genocide, when some 800,000 people were killed in less than 100 days.

Later, as the French foreign minister in President Nicolas Sarkozy's government, Kouchner fought for what he calls the "right to humanitarian intervention." In Rwanda the international community stood idly by while the slaughter continued. But France has learned from its mistakes, and Kouchner now says that he is filled with "pride" that 1,600 French soldiers marched into the Central African Republic last week. "The population wants us to help them," he argues. In the capital of Bangui alone, up to 500 civilians were killed within just a few days. "We cannot allow that," Kouchner says.

At stake here are "human rights, human lives," he says, along with security -- "for all of us." He contends that France has a "responsibility there," and is living up to this, "in contrast to the Germans."

Paris and Berlin are at opposite poles on foreign and security policy. Their positions resemble the economic situation, only in reverse. Germany is the economic giant, but when it comes to military operations, it runs for cover and allows France, and occasionally the United Kingdom, to risk an intervention -- and, above all, to cover the costs.

The mission in the Central African Republic is expected to cost between €400-€500 million ($550-$690 million). That's a lot of money for France, which has been hard hit by the euro crisis. Indeed, last week French President François Hollande urged other European Union member states to assume some of the costs. A number of countries have already indicated their support. "The French demands are justified," says Luxembourg Foreign Minister Jean Asselborn.

What's more, on Thursday the EU's 28 heads of state and government plan to meet in Brussels to discuss -- for the first time in five years -- the future of the "common security and defense policy," as it's called in the Lisbon Treaty. But the title is hardly worth the paper that it's printed on.

Yes, the EU is training soldiers in Somalia and Mali, and yes, it is protecting ships against pirates on the Horn of Africa. Yet whenever it needs to rapidly respond to a crisis, Europe fails to deliver.

Nonetheless, the EU has already had a rapid reaction force in place for the past 10 years. These two battalion-sized units are called "battle groups." They are constantly training and can be deployed within 10 days, but have never seen military action.

When military leaders in Brussels are asked why that is, they point the finger at politicians. Nobody wants to deploy the battle groups, they say. "There is a clear necessity on a political level to respond more rapidly to crises, including militarily," says Lieutenant General Wolfgang Wosolsobe, the head of the EU's military staff.

It has always been the French government that presses for military action -- in Libya, Mali and Syria -- and in two out of these three situations France acted on its own because the other EU countries could not reach an agreement. Now Paris is asking the other countries to pay the bill for their inaction.

No country has sent troops to Africa as often as the French. For over half a century, Paris has fought a series of wars, battles and skirmishes between Algiers and Cape Town. Hardly a year has passed without the French launching an operation in Africa, where their soldiers fought and died.

Operation Sangaris in the Central African Republic is France's 39th African mission since Paris granted independence to nearly all of its colonies in 1960. In overnight fighting on Tuesday last week, two French soldiers died near Bangui airport. Now paratroopers and Foreign Legionnaires are patrolling the streets.

Some 460,000 people have fled the fighting in the Central African Republic, meaning that one-tenth of the population is seeking refuge from the bands of Seleka rebels. Last March, the rebels toppled the president -- who was supported by France -- but now refuse to lay down their weapons. Most of the rebels are Muslim, and are clashing with primarily Christian, civilian militias called the anti-balaka.

"Why are we here? Why are we in Mali?", Hollande asked his soldiers when he made a stopover at Bangui airport on his return flight from Nelson Mandela's funeral. Because it is time "to act," he said.

The president, who was evidently tired from his flight to Johannesburg and back, didn't sound genuinely convinced. The French army will spend weeks, even months in this country, taking Kalashnikovs away from inebriated young men.

A History of Intervention

Yet Paris is there because the government is responsible for decades of corruption and mismanagement in the former colony, and because it is afraid of standing on the sidelines and helplessly witnessing another genocide like the one in Rwanda. The French are also here because failing states with a sizable Muslim population attract arms smugglers and human traffickers, as the situation in Mali has shown.

After the end of the colonial era, France's policy on Africa was long driven by selfish motives. Former French President Charles de Gaulle pushed to leave as many military bases on the continent as possible. He established a network of secret connections to the new African strongmen. Paris offered them protection, and the politicians returned the favor with natural resources.

The leadership in Paris thus became the cronies of corrupt rulers who were responsible for poverty in many countries. But the role of protector gradually changed over time. National interests waned while humanitarian aid became an increasingly urgent priority.

In 2002, French soldiers placed themselves between warring factions in Ivory Coast's bitter civil war. In 2008, they defended Chad's dictator Idriss Déby against a rebel force -- not because they liked him, but to avoid chaos and bloodshed. In 2011, Sarkozy urged the world to attack Libyan ruler Moammar Gadhafi.

The operation in Mali under Sarkozy's successor Hollande focused for the first time on European security interests. France took military action against Islamists who had established a base in northern Mali. Berlin contributed two Transall transport aircraft to the operation and dispatched 40 military trainers to Bamako. France can't expect much more from the German government this time around, either.

"It is constitutionally impossible to directly support France during its mission in the Central African Republic," says German State Secretary of Defense Christian Schmidt, a member of the Christian Social Union (CSU), the Bavarian sister party of Chancellor Angela Merkel's conservative Christian Democratic Union (CDU). "We can offer air support -- nothing more."

This offer was conveyed to Paris last week. Chancellery and Defense Ministry officials reckon that Germany can entirely avoid deploying its own troops. Government sources argue that the UK and Belgium are already helping with the transport, and they say the German military, the Bundeswehr, is not needed.

It remains to be seen how the European Council will react this week when France holds out its hand. The French are even calling for the establishment of a permanent fund to finance missions abroad, but Berlin opposes this, as well.

This week Germany has remained aloof on the matter, downplaying the potential for providing financial assistance for the mission. On Wednesday French European Affairs Minister Thierry Repentin suggested that Germany and Britain would consider sending troops, which both countries denied. The same day, an anonymous senior German official said that according to European rules, countries should pay for their military missions themselves, news agency Reuters reported.

"The German government has to say: We won't pay here," says Hans-Peter Bartels, a defense expert from the left-leaning Social Democrats (SPD). Bartels argues that France should have called for a vote on the mission beforehand, since central Africa is "not within the first circle of German security policy" interests.

In Germany, such missions are subject to parliamentary scrutiny, but in France the president can deploy troops on the ground without parliament's approval. A large number of French politicians believe that Berlin eagerly points to the need for a parliamentary mandate so it can rule out any German participation right from the start.

In contrast to the Americans, the French have been backing up their operations for years with mandates from the United Nations Security Council. Politicians in Paris are also aware of the inherent risks of France's latest military venture: The Central African Republic has essentially ceased to exist as a state, with no political parties, no free press, and a traumatized population.

"We are well aware," says Bernard Kouchner, "that the operation won't be a picnic."