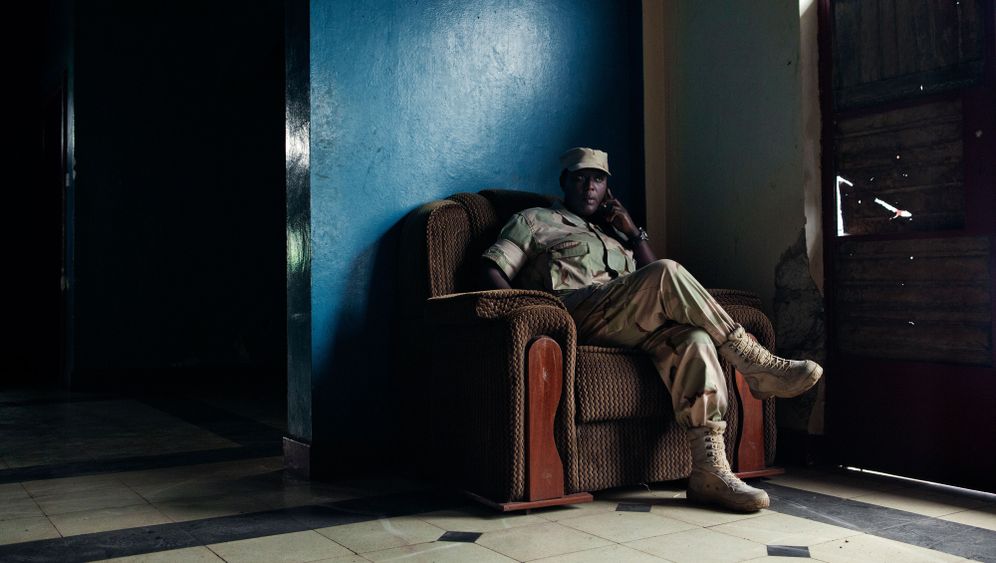 The Kivu region is extremely dangerous. The lush area on the eastern outskirts of the Democratic Republic of Congo is the hiding ground for some of Africa's most notorious rebel groups, like the fighters for the M23 Movement, which is engaged in a conflict with the country's government. Here, there is little by way of infrastructure or state control.

Despite the dangers, an interest in the marauding rebel groups has repeatedly brought photographer Francesca Tosarelli to the region along the borders of Congo, Uganda and Rwanda.

Over the course of four months in early 2013, the young Italian sought contact with M23, Mai Mai Shetani and other rebel groups, creating "Ms. Kalashnikov," a stunning photo series about the largely unknown subgroups in the African rebel scene. The series focuses on the increasing number of women who are joining their ranks.

"I'm fascinated by how the dividing lines between genders are blurred by these conflicts," Tosarelli says. "These women don't fit any roles established by society. They can be mothers and organized killers at the same time."

Before photographing them, she first needed to earn their trust. "It wasn't always easy for me; personal connections had to develop first," she says.

That was the case with Major Mathilde Samba, who at the age of just 31, already has years of military experience. After serving in the Congolese army for 13 years, in November 2012 she switched sides. Since then, she has been fighting alongside her husband for M23. The couple sent their daughters far away to the capital Kinshasa to protect them from the fighting in the east. Samba says she believes the only way to influence Congo's history is through M23's war, and that she has lost trust in the corrupt state power.

"One needn't have any illusions or sugarcoat anything," says Tosarelli. "In the field these women conduct themselves no differently than their male comrades." And that includes committing murders, robberies and kidnapping. For many of these women revenge is the primary motivation for this, particularly among the younger fighters. Many of them have lost relatives to the rebels, or were raped or wounded. Now, they seek vengeance in the rebel ranks.

Take Rehema Rahijya, for example. The young woman, who either can't remember or won't reveal her age, doesn't look much older than 16. In 2012, she joined the Mai Mai Shetani rebels. The story that the foot soldier tells is similar to many that Tosarelli heard while conducting her research: Fighters raped her sister and stole the family's livestock. She says she'll never marry or find another job. After all, who would want a murderess? Lack of prospects and the wish for atonement have already driven her into a rival rebel group. She will not reveal whether she has ever been forced to fight.

Young people are particularly vulnerable to the dangers of the Kivu region, where the spheres of influence are constantly changing amid frequent skirmishes. Although United Nations troops and the Congolese army ensure something resembling security in the cities, the jungles and scrubland are practically uncontrollable. Militias frequently kidnap young people to add to their ranks. Boys are forced to take up arms, and girls are enslaved as household and sex workers, and now frequently as soldiers too.

"My photos should show how multi-layered both the motivations and understanding of roles can be among the women fighters," Tosarelli says. "Some of these women want to fight, while others make you wonder if they have a choice."

Perhaps none of the women featured in the photographer's work embodies this contrast like Colonel Fanette Umuraza. A 32-year-old with a university degree in political science, she is a fighter through and through. She vehemently champions the ideology of M23's military chief Sultani Makenga, having worked her way up to serve as his right-hand woman. She says she wants to free the women of Congo from their role as victims, though the fact that rebel groups have been repeatedly accused of committing rapes makes this seem contradictory.

Umuraza has proven herself as a fighter, and men under her command stand at her attention. She has demanded and earned the respect of even the toughest rebels. Yet in stark contrast to her camouflage uniform, Tosarelli's photo series features her wearing lavender nail polish.