Two days before the Chinese New Year, at a time when families across the country get together to celebrate, the merchants at the Huanan fish market in the central Chinese city of Wuhan should have been raking in profits. In a normal year, they would be selling large amounts of fish and shellfish, and the countless other kinds of meat for which the market is famous. This includes beef and pork, rabbit and donkey, fox and crocodile, giant Chinese salamander, snake, badger, rat and camel, and much more.

Some wild animals are sold alive – and illegally. But eating rare meat has a long history in China.

The Epicenter of the New Epidemic

As this Year of the Rat begins in China, however, nothing is normal in Wuhan, a city of 11 million. The police have blocked off the market’s two-story building with white-and-blue warning tape. Behind it, visitors can see heavy grates and hallways – a tiled floor, drainage gutters, stands lined up left and right. The blue shutters are pulled down, with no sign of life. Behind a window, the water bubbles in an otherwise empty fish tank.

The market is very likely the epicenter of the new epidemic which has alarmed the rest of the world. In December, it’s likely that a wild animal on sale carried a virus that managed to infect a person here. Its preliminary name is the coronavirus “2019-nCoV.” Scientists have found clues suggesting that the virus’ host was a snake. Chinese authorities believe badgers and rats might be responsible.

Huang Chang, 56, is among the merchants who ran a fish stand in Huanan Market. On Jan. 6, it became clear to him that he had to go to the doctor. He told Sanlian Life Week, a Chinese magazine, that he felt “weak and feverish.” He also had a “light cough” and “no appetite.” The doctors kept him in the hospital for two weeks. A few days later, his wife developed similar symptoms.

While the married couple battled the infection, and ultimately recovered, the virus spread thousands of kilometers around the world. The World Health Organization (WHO) counted 17 dead and 581 infected as of Thursday evening. Cases appeared in Wuhan, but also in Guangdong, Beijing, Shanghai, Hong Kong, Thailand, South Korea, Japan and the United States. The Health Ministry in Singapore reported a case, the Vietnamese Health Ministry announced two.

According to calculations by researchers at Imperial College London, the true number of infected was already at 4,000 on Jan. 18. And there was the threat of an impending catastrophe. Every year, hundreds of millions of people across the country travel to visit their families for the Chinese New Year on Jan. 25. The virus would have irreversibly – and by a factor of thousands – spread into all corners of the country and beyond.

A Measure Unthinkable in the West

Ultimately, the Chinese government settled on a measure that would be unthinkable in Western countries: On Thursday, it cut off all primary transport pathways to and from Wuhan. Airports and train stations were blocked. Bus, subway and ferry connections were interrupted. People were asked to only leave the city under special circumstances. Officials in Hunggang, a major city near Wuhan, also wanted to stop bus and train service, as did the cities of Ezhou and Chibi. In Beijing, all large-scale celebrations of the new year were cancelled, and the Forbidden City was closed to tourists.

Since Wednesday evening, protective masks have been mandatory on the streets of Wuhan. They have long been sold out in many stores. People who can’t purchase new ones simply rinse out their used masks in the evening.

Nevertheless, after a long debate, officials at WHO decided not to declare an international public health emergency on Thursday. Didier Houssin, the chair of the Emergency Committee convened by the organization, explained that it was too early. “This is an emergency in China,” said WHO Director-General Tedros Ghebreyesus, “but it has not yet become a global health emergency.”

North Korea had decided a few days earlier to no longer allow any tourists into the country for the time being. Airports in the United States and the United Kingdom introduced strict health screening measures, followed by Italy, Abu Dhabi, Egypt and many others. Fraport, the company that operates the Frankfurt airport, also made a point of announcing that there are no direct flights to the German hub from Wuhan.

A Delicate Moment for China

The Chinese stock exchange and the country’s currency took a hit, at a delicate moment for the country.

But many important questions remain unanswered. It’s not clear if infected people who only show weak or even no symptoms can pass along the virus like those who are seriously ill. If those who carry the virus have no idea that they might be infecting others, it could make the epidemic much harder to control.

According to WHO, there are now indicators that there might be chains of human-to-human infection, in which the virus is not only transmitted from one person to a second, but from that second person to a third and from the third to a fourth. Thus far, however, no person-to-person contact has been found to have occurred thus far outside of China.

As of Thursday evening, everything is still theoretically possible: the outbreak could be gotten under control in a relatively short period of time and fade away – or it could develop into a catastrophic pandemic.

One characteristic of the new virus, in particular, has worried the virologists from the start: its similarity to the SARS virus.

The SARS epidemic began in 2002 in Guangdong, likely at a market similar to the one in Wuhan. The coronavirus was most likely transmitted to people via the consumption of palm civets. The epidemic ultimately spread to several countries and caused 774 deaths worldwide.

To this day, many virologists see SARS as the most dangerous epidemic of the 21st century, far more dangerous than bird flu. The Chinese authorities are still accused of having withheld information about the new epidemic for weeks at the time, thus making its global spread possible.

Strict quarantine and hygiene measures were necessary to stop the SARS virus in the summer of 2003. The related MERS coronavirus -- which appeared in the Middle East in 2012, is transmitted from dromedary camels to humans and kills more than one-third of the people it infects -- has not yet been completely contained.

“The Situation Is Very Serious”

Nevertheless, the new virus is killing far fewer people than its two predecessors, with mortality currently estimated at 4 percent. SARS killed around one out of 10 patients. The authorities have also reported that the people who have died so far have mainly been elderly patients already in poor health. At the beginning of an outbreak, when it is mainly the severe cases that get reported, it is common for mortality rates to get significantly overestimated. But if it does become a worldwide epidemic, the relatively few patients dying from the virus will add up significantly.

“I think the situation is very serious,” says Jeremy Farrar, director of the Wellcome Trust, who experienced the SARS outbreak in Vietnam in 2003 as a doctor and scientist.

Experts haven’t been taken by surprise by the fact that there’s a new coronavirus epidemic. Genetic analyses suggest that 2019-nCoV could be a mutation of the genetic material of two coronaviruses. “These viruses can change dramatically through recombination,” says Christian Drosten, director of the Institute of Virology at Berlin's Charité university hospital and co-discoverer of the SARS virus. "This is well known and one of the reasons that they are so dangerous."

One of the two coronavirus strains responsible for the new virus is found in bats. The SARS virus also lived in these animals before it was passed on to humans through the palm civet.

“Bats are carriers of a ton of different strains of coronavirus,” says Drosten. “In some cases, they can even spread directly to humans.”

This was also observed by Zhengli Shi, professor of virology and coronavirus expert in Wuhan. A few years back, she studied the blood of people around 1,000 kilometers south of Wuhan living near bat caves. Around 3 percent of those people were found to have antibodies against SARS-like coronaviruses in their blood, a clear indication that they had been exposed to the pathogens.

“It’s likely common for coronaviruses to spread from bats to humans and animals,” says Drosten. “The fact that this has now become a new epidemic is just an unfortunate coincidence.”

What worries virologists, though, is that the new virus, like the SARS pathogen before it, uses the so-called ACE-2 protein as its port of entry into the lungs.

“This means it can also cause severe lung damage, just like SARS,” warns Drosten. “The strain of the coronavirus in Wutan presents a significant public health risk,” a group of scientists from Shanghai and Beijing wrote in the current issue of the journal Science China Life Sciences.

Chinese scientists are conducting high-quality research into the coronavirus, but they have also clearly been under massive pressure in recent days. Queries, mails and requests for comment by DER SPIEGEL went unanswered. A well-known research institute in Hong Kong even diverted all its calls to an answering machine. One Beijing doctor who got infected in Wuhan hung up his phone without answering.

They’re all aware that when eight Chinese Internet users mentioned a “new SARS” in Wuhan in online posts in late December, they promptly got summoned and interrogated by the Public Security Bureau.

Still, the Chinese authorities sounded the alarm bells much earlier this time than they did during the SARS crisis. The World Health Organization repeatedly emphasized that fact in a press conference. In Germany, Christian Drosten also believes that the spread of the new virus really only began recently. He says that can be detected in the gene sequence, which has been very similar in all the people infected.

Jeremy Farrar says he now considers it “inevitable” that the virus will spread to Europe, despite all the measures being taken. But it’s difficult for anyone to predict at the moment whether it will be more than a few isolated cases.

Officials at the Robert Koch Institute, Germany’s center for disease control, still believe the threat to Germany is low. Other experts expect to see a few cases, but they don’t see any cause for alarm.

Tests are still being conducted to determine which medications could be effective in treating the coronavirus, for which there is currently no vaccine. On Thursday, the Coalition for Epidemic Preparedness Innovations, an international vaccine initiative, announced it would fund three programs seeking to develop one. The aim is for scientists to make enough progress so that they can begin testing vaccine candidates by June.

And what if the virus mutates and begins spreading more aggressively? How well is Germany prepared for that eventuality? If that were to happen, the problems might run deeper than just having a lack of beds available in intensive care units. Drosten’s worry is that local health authorities, which are responsible for making many of the important decisions in the event of an epidemic, will also be overburdened because of chronic understaffing.

“As long as we don't have a vaccine and medicines, the best advice for Europe, is the simplest advice” says Jeremy Farrar. “Wash your hands, wear a mask and don’t work or travel if you feel sick so as to protect others.” Unfortunately, he adds, “it is very difficult to stop this type of virus.” 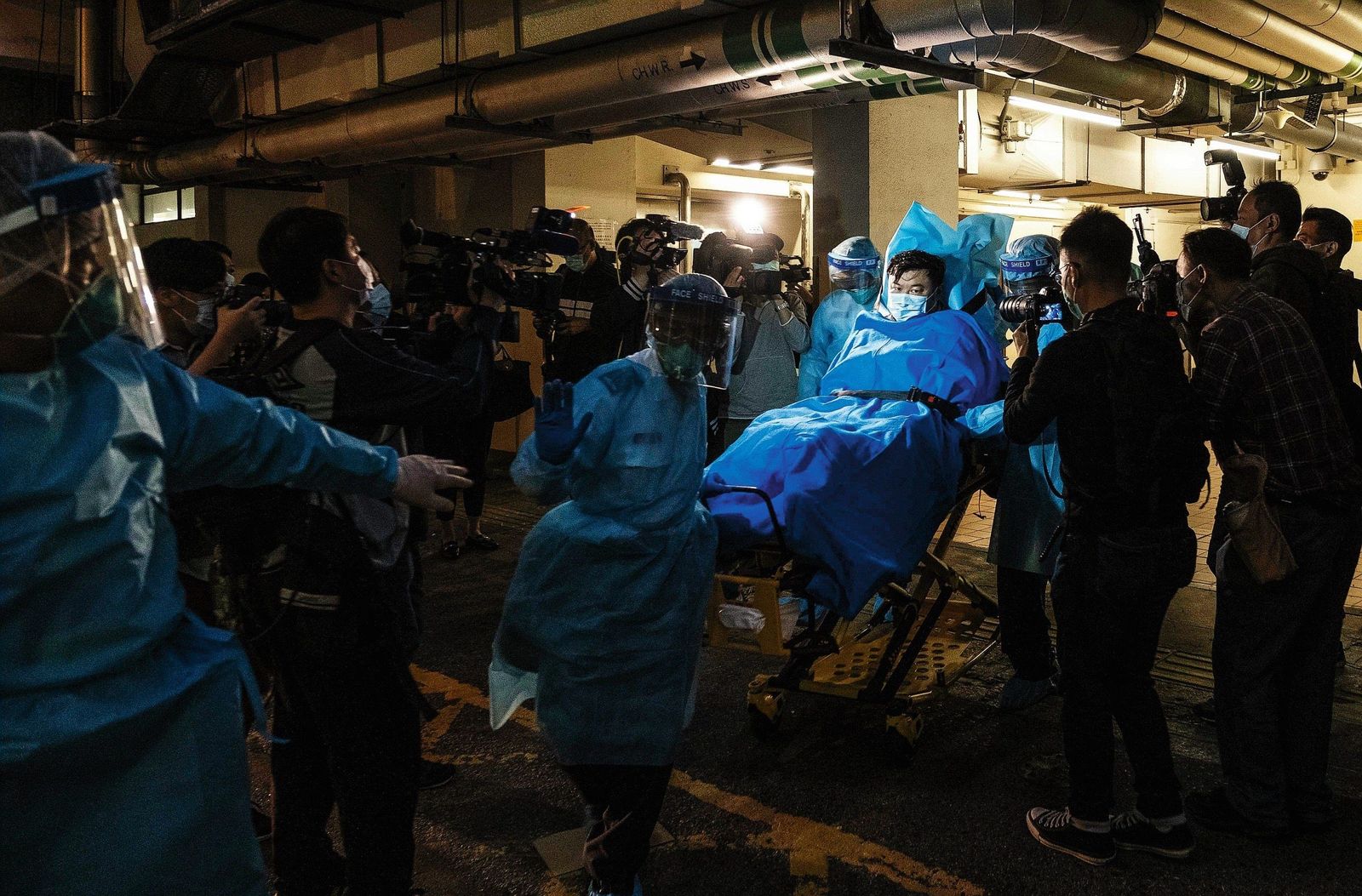 A patient with symptoms of the new virus in Hong Kong